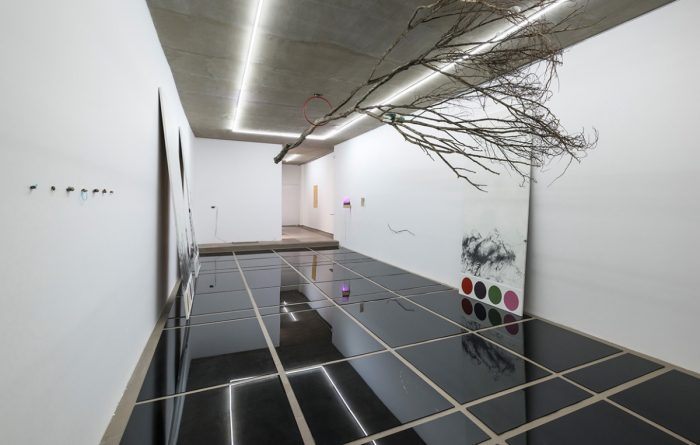 Con un pie en la tierra [With one foot on Earth] presents the work by Iñaki Chávarri (Madrid, 1982) and Adriana Rosell (Caracas, 1988) done ex profeso for the occasion: SKETCH’s first artists-in-residence. We have here a series of drawings, sculptures and installations giving form to the question: What if we are one more resource that nature uses to transform itself? What makes us think that the impact of humans on the environment is not an extension of natural intelligence? Why do we limit the idea of environmental fragility to nature only, understood as something external and dependent on the human species? Isn’t the act of trying to save the planet a profoundly egoistic stance?

Geologists have classified life on earth into several eras. We are now in the Anthropocene, where human beings have become a geological force with the power to generate an impact on and transformations of the planet, once again placing our species as the leading agent of the environment. In a search for other points of view, “Sheila Jasanoff proposes the term co-production, where the social and natural orders are not separate but each determines and co-produces the other.” For instance, the Atrato River is recognized as a subject of rights, in this update of the paradigm.

In consequence, to think of ourselves from a different place implies relating to the surrounding human and non-human circumstances (visual, conceptual, physical) in a different way, to create agreements that permit us to flow in the Network of Life, where no fact can be considered as an isolated element.

Adriana and Iñaki intend to affect our thinking as humans trying to lead us to controvert our role as a species and finally, to reflect on the solipsistic civilization that we have constructed.

The 15th edition of ARTBO