Mario Llanos Luna discusses the challenges posed by life in the tropics, and formulates a critical approach to the recent international enthusiasm around Colombian contemporary art. His posture takes into account the particular context of Puerto Colombia: a town in the Atlantic coast of Colombia – an ancient port near Barranquilla – where the failures of modernity still haunt the present. 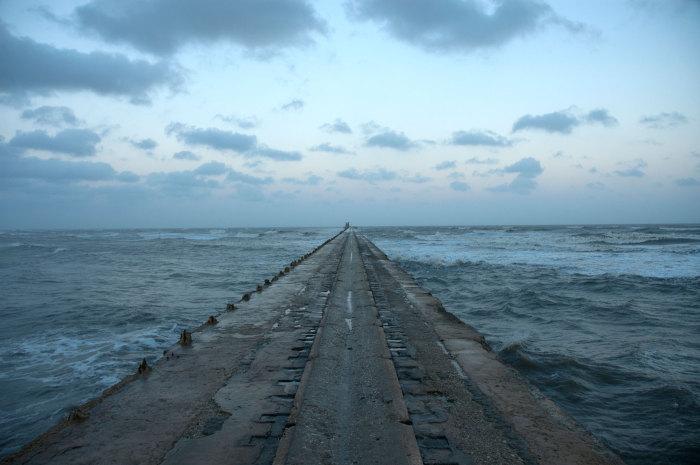 I could name many reasons why I chose to live in Puerto Colombia, Barranquilla – a place geographically located in the Colombian Caribbean in the Atlántico state. Puerto is a place where for better or for worse, little or nothing happens in regards to contemporary art in the present. There are plenty of answers I could give to the two most common questions that people in the arts pose when they find out where I live: Why Puerto Colombia? What happens there?

It would be easier for me to say that I had no choice and that I’m here due to reasons beyond my control, that I was lucky or unlucky enough to have been born close to Puerto Colombia, that it was my parents’ fault because they lived here. Or even that I’m bound by sentimental ties because many of the people I cherish are here, or maybe simply because en el mar la vida es mas sabrosa (life is more delicious close to the sea). These are but a few among the hundreds of easier reasons that come to my mind when responding.

To understand why I chose to live in Puerto Colombia over any other place in the country where there is an active scene or more encouraging prospects for the arts, it is first necessary to know about its past and maybe then try to grasp the importance of its future.

At some point in history, Puerto’s panorama looked different. There is a popular saying that goes “all past times were better,” that better past time happened in the first half of the 20th century when Puerto Colombia emerged in both the national and the international panoramas thanks to its dock designed by Cuban engineer Francisco Javier Cisneros. At the time, it was the second largest port in the world thus becoming a point of reference, and also the place where modernity or “the future” as the concept was understood in Colombia.

Railways, air mail, art, food, cars, and music were among the novelties that came in through the port, along with the immigrants of different nationalities that were tired of running away from the war. With time, they helped to build the city with their new ideas and lifestyles brought from a continent to which most of them never returned.

As the years went by that idea of modernity saw its great failures here as it did in many other places around the world. Tragically, Puerto Colombia and its dock ceased all port activities after fifty years in 1943, leaving this flourishing population condemned to ruin and oblivion. 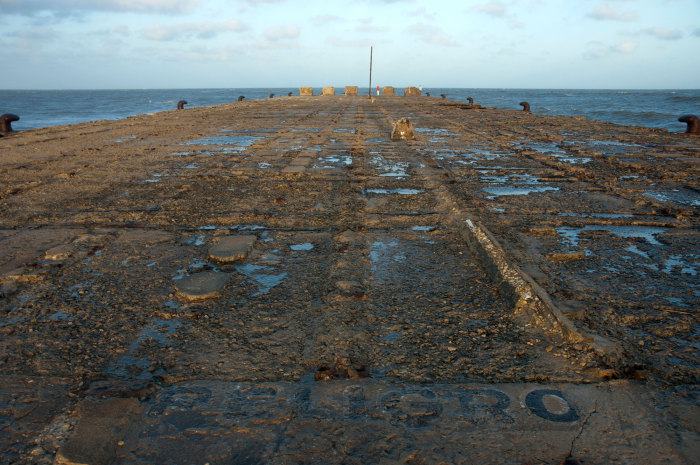 The total closing of the dock originated as a result of two factors: the first was that by that time the transportation activities at Buenaventura port in El Valle state outgrew and by far exceeded those of Puerto Colombia; the second and most important factor was the building of a channel passage known as Bocas de Ceniza (Mouths of Ashes) at the Magdalena River – the most important river flow of the country. This new channel allowed ships entry to a new maritime terminal located close to the city center of Barranquilla. Therefore, the dock at Puerto Colombia began its progressive deterioration that continues until today. 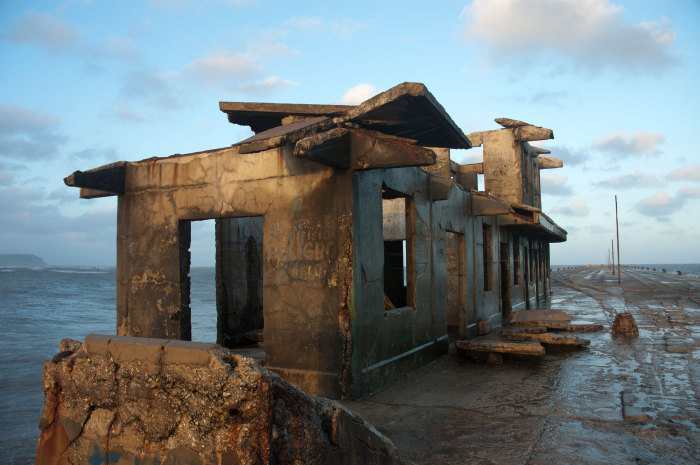 With the end of this active period of Puerto Colombia, also known as the golden years, began a dark era marked by confusion and desolate perspectives. Its population was left submerged in a sort of suspended time of memories of a better past – a very romantic position to inhabit. Most of the ideas developed and dreams of artistic avant-garde of the time were abandoned by all except for a few enthusiasts like Alejandro Obregón, Luis Ernesto Arocha, Álvaro Cepeda Samudio, Alfonso Fuenmayor, and Germán Vargas, among others, who were known as “El Grupo de Barranquilla”. Years later, they would retake these dreams and their premises and apply them to the fields of architecture, painting, photography, cinema, journalism, and literature leaving their mark as “the last men of the future”.

A few years ago I decided to open an independent art space with artist María Isabel Rueda called La Usurpadora (The Usurper). At the moment, I had in my mind that group of people from the future past. I wanted to understand what they saw in Puerto Colombia and I decided to move there. It was like going back to the future. Actually, I was neither alien to nor indifferent about the decades-long, bleak situation of the place after the evanescence of these last men of the future. Still, over time, I discovered it was an open zone, and it provided fresh grounds free of institutional interventions or mediations, a rarity in the now overly clustered art world.

This free terrain bears propitious conditions for undertaking experimentation with new alternative processes or to push forward previous ones. The absence of institutions, galleries, and museums could be seen as beneficial if we think that it is precisely because of this lack that artists are able to generate a body of work that isn’t preoccupied with any pre-established art world concepts, work that is free of institutional, economic, or political concerns.

Colombian art is going through a boom of international interest that has brought with it visits from important international curators, museums, and galleries. This moment is beneficial for some artists, institutions, and galleries in Bogotá and on a smaller scale, in Medellín and Cali. But big expectations and visibility are not everywhere. This boom has brought along a phenomenon that some have called normalization of the arts, which is characterized by the loss of spontaneity and experimental drive, resulting in work that never surprises. Everything looks very decent, very careful, customized for the market, and all of it is typecast as “Colombian art.”

Actually, the normalization phenomenon has awoken in artists an interest in places like Puerto Colombia. Many see it as an apt place for thinking and coming up with new ideas, for experiencing new situations, for observing a different geography, and a place to coexist with new practices. When these new experiences are integrated into the artists’ work dynamics and production, it is conceivable to think of it as a passage out of normalization. Puerto Colombia is then a new starting point, a place where nothing is written and everything is still waiting to de done. 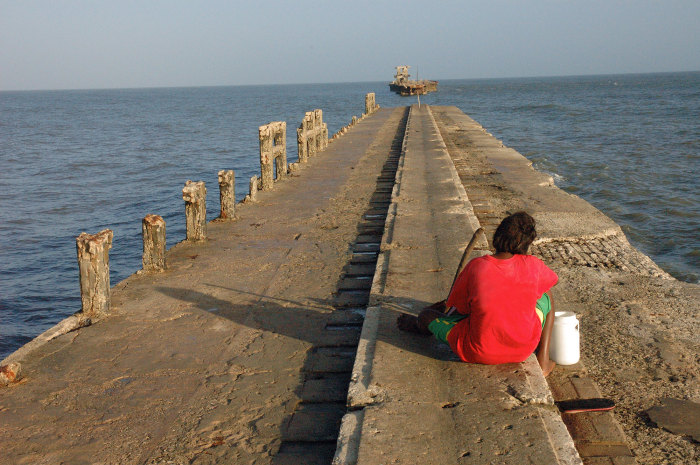 This very encouraging and even seductive perspective rids the idea of living in places like Puerto Colombia today of a past imaginary of sacrifice regarded to small towns from the big cities. Although it must be mentioned that indeed life in the tropics is not easy. Carrying out daily activities of any kind under high temperatures that range between thirty-five and forty degrees Celsius, with an index of 70% humidity, turns quotidian activities into feats. Any space with shade is a perfect refuge, which directly influences Puerto’s architecture in which darkness predominates. Spaces are designed with an attempt to avoid sunrays as much as possible, generating a sort of Tropical Gothic architectural style. Also, even though it’s true that life closer to the sea is more delicious, this same sea arises in everyday life as a complex character. Not only does it incite the population to relax to the point of abandoning any responsibility, its high iodine and salt content mixed with the moisture that exists in this paradise hinders the preservation of materials like paper, wood, the pier’s iron, and so on. The sea is also an enemy. For many, life in the tropics is a full-time job; its main attractions become a double-edged sword. But this phenomenon happens in many parts of the world, even in big cities.

What those men of the future past saw in Puerto Colombia becomes clearer to me as time goes by. The future of the dock lies in its own past which is a metaphor: to go on, by evolving from a ruin.