Oliver Martínez-Kandt interviews Rodrigo Hernández and considers the artist’s practice as a reflection of a formal intuition, acting between presence and re-presentation. The conversation departs from a lecture in 1940 by Josef Albers entitled, “Truthfulness in Art,” where a series of slides of Mexican pre-Columbian sculptures were shown alongside the question “What is plastic?”. 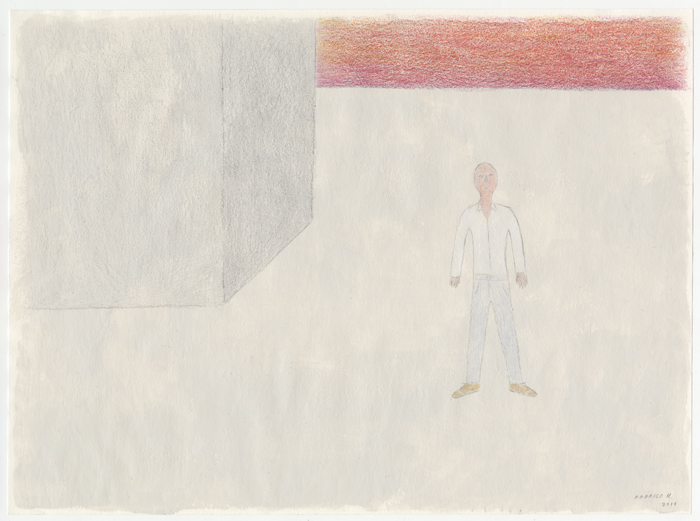 Oliver Martínez-Kandt : In the exhibition Go, gentle scorpio, you exhibited a floor piece that could only be visited after the sunset and was only illuminated by the street light entering the exhibition space of Parallel Oaxaca. How did you work with this situation in order to create a space that was able to suggest both fiction and metaphor?

Rodrigo Hernández : On one side, the visitor had a bird’s-eye view of the work that allowed him to see everything, and to access the piece in its totality from every angle, like when one has a book page in front of his eyes or a map between his hands. On the other extreme, there was the night, or the night’s darkness, which pulls things into invisibility. The material I used was very simple – paper mixed with water – but while installing it I found that it changed in the darkness and looked like wet sand.

In general, I like to be open to these accidents that sometimes lead to a material or constructive confusion. This interests me very much and often becomes essential to think about a certain piece, to sort of integrate it in my language and to continue with new experiments. I find immense pleasure in imagining someone seeing it and asking, “what is it?” or “what is it made of?”. We use to have an instinctive trust in our sight to build an idea of what is in front of us, and that’s maybe how a multiplicity of scenarios can coexist simultaneously in our minds (visitors of the show saw things like a night date on the beach, an invaded archaeological site or body pieces after a crime), as if the material would have a certain narrative elasticity. Confusion as a principle that also gives somewhat of a structure to experience is a subject that constantly appears during different moments of my working process. 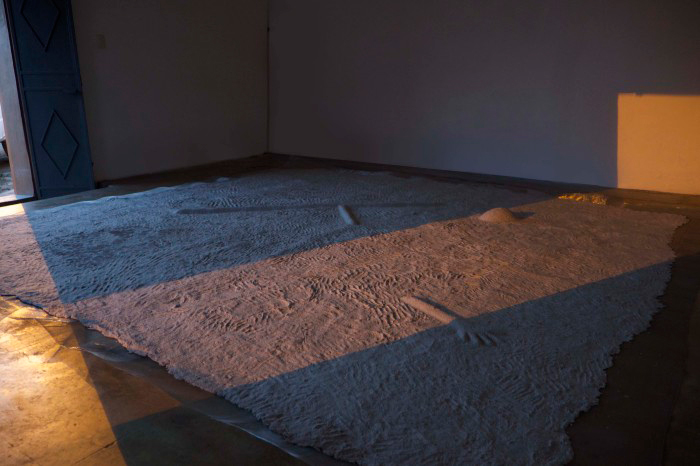 OMK : Who are the characters of Go, gentle scorpio?

RH : I often get these kinds of questions because in my work there is a male human figure that constantly reappears, and I can understand how it could make someone think that he is a character and that there is a narrative supporting him, which I find to be quite an odd conclusion anyway (is any figure a character?).

Who is that person? What is he doing? Where does he come from? These are questions that might arguably seem simple and vague, but that actually approach my central concerns in a way I feel is right. Ideally, I would like to give shape to a neutral character, if that could be possible: someone that could act without the mental and moral attributes distinctive of an individual personality, and someone easy to identify with, in a direct, almost physical way. I use the human figure to make the viewer move closer to the work, even if it is in a distorted mirror-like way, and to point in the direction of ideas with a clear human focus that interests me: touch, sight, movement, etc.

I also wish to give space to my personal sense of humor, which you might recognize sometimes in the style of my figures, similar to cartoons with an air of sad irony. Do you recall that guy from the series Merry Melodies as thin as a sheet of paper that disappeared from your sight when you saw him walking from the side? Well, he has always been a big inspiration to me. 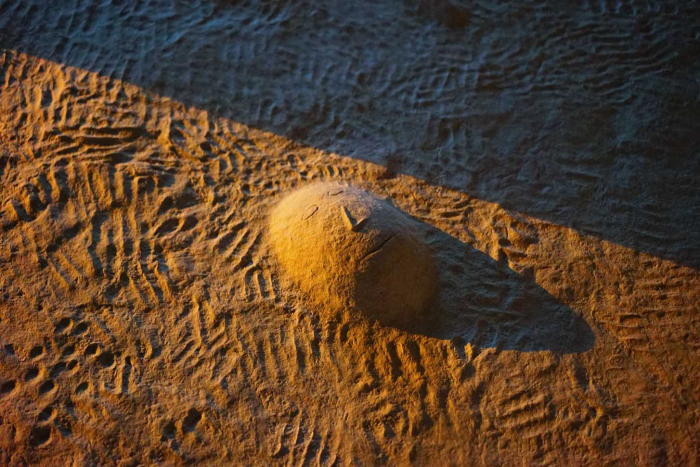 OMK : Can you tell me something about the title of the exhibition, Go, gentle scorpio?

RH : The title is very ambiguous, and I wouldn’t like to try to change that. The words, anyway, come from the Woody Allen movie, Bullets over Broadway. Other references are a personal love story and an anonymous fable about a turtle and a scorpion, both having a lot to do with that pathetic human desire to change the nature of things.
Also, it’s very important that the title has a form that reminds of a dialogue, or of the end of a dialogue. It mixes many tones and there’s something about it that inevitably seems odd and that refuses to be read. 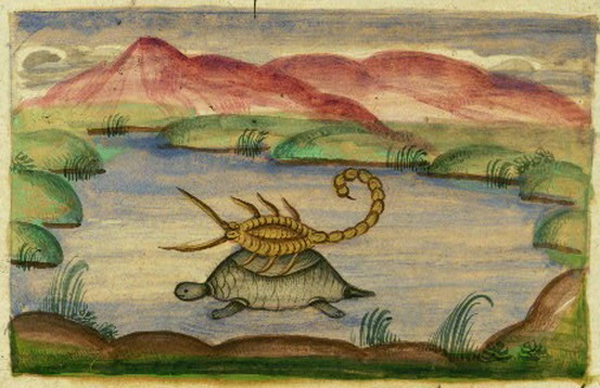 OMK : In “Truthfulness in Art,” a lecture by Josef Albers that inspired the work you made for Parallel Oaxaca, the author shows a series of Mexican pre-Columbian sculptures in order to address the question “What is plastic?”. Do you think that your work somehow shares a sensibility with these sculptures?

RH : Fundamentally, yes. But I can only answer this question partially because I am currently occupied with it and I would rather keep it open for the moment. In the book, Indian art of Mexico and Central America by Miguel Covarrubias, I recently found a very provocative way to speak about sensibility in this context. According to him, there is an Olmec “aesthetic ideology” that is closer to the spirit of the primitive cultures: “simplicity and sensual realism in the shapes: vigorous and original concepts” in opposition to the “formalized and rigorous art from the highlands, and the baroque, unbounded art of the lowlands of the classic period, both impregnated with symbolism and ceremonial functionalism.” I would definitively rather identify myself with the first “spirit”. Furthermore, what interested me first about the sculptures considered in Albers’ lecture is the fact that he chose to describe them without detail and with a language closer to literature, coinciding with the essence of Covarrubias’ thesis. 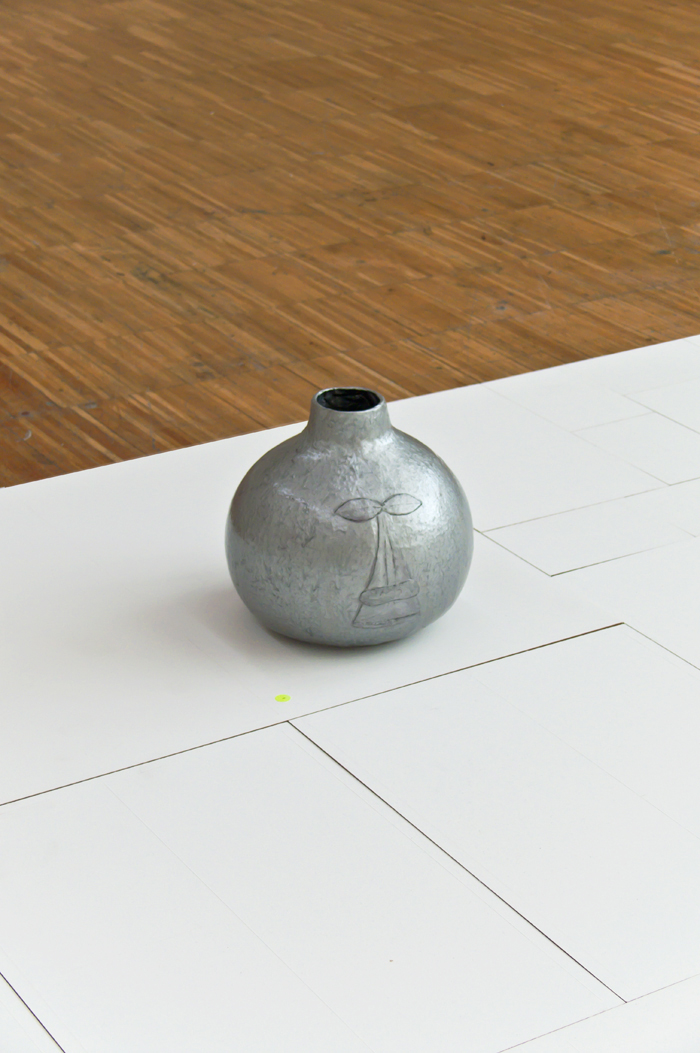 OMK : In previous works you have referenced Surrealist or Dadaist artists and writers. For example, your show What is the moon? at the Bonnefantenmuseum in Maastricht, and the publication with the same title from Bom Día Boa Tarde Boa Noite both draw inspiration from a text by René Magritte, entitled “Les Mots et les Images”. Does it matter whether someone understands the references you use, or is just seduced by the materiality of the work?

RH : In terms of references, I am very open. I don’t deny access to any image or idea as long as it results interesting in the context of what I am thinking about at the moment. How I combine them and filter them in the process of preparing an exhibition is never guided by an intention of making them look clear or of disguising them. They are what they are and they might seem evident in a different way to each person looking. I do not fear being misread. In the case of What is the moon? I was referencing images that were defined by elusiveness so I guess it would have been strange to expect a full-reading experience from the viewer.

When it comes to materiality I like contrasts but also repetition. Sometimes I like testing many solutions in my head before trying things out in reality. I draw and write a lot. Then, when I feel instinctively driven to something I just go for it fast, hoping the reaction of the viewer has also something of that instinctiveness. So, yes, seducing people matters a lot to me. 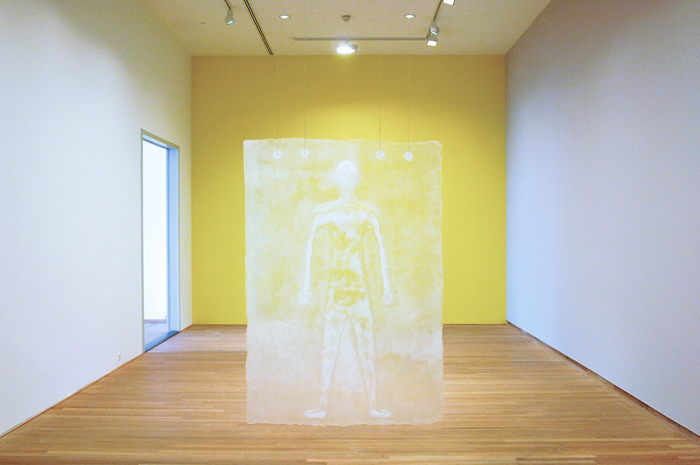 Rodrigo Hernández, What is the moon?, 2014, installation, Bonnefantenmuseum, Maastricht

Images courtesy of the artist.