From tracing the importance of political affection in Latinx’s Trap as song of survival, poetic theorist Ren (Rachel) Ellis Neyra presents two poems about the fugitivity of the migrant body. 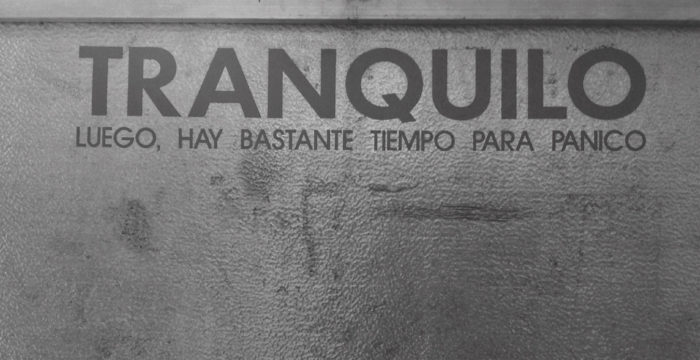 Latinx Trap tracks elegize across high-hats, dembow, 808s and heart- break. Trap sings explicit sex with love’s encountered and lost objects for listeners whose everyday lives are legally vulnerable and abject. Ain’t none of us sovereign; and ain’t no kumbayá to sing on this massive scale, targeted social death shit. But blingy bois and fly womyn moan mourning for what’s been lost, so as not to keep losing what has been.

To claim a loss and how it’s undone you means you don’t have to un-become you, you who live in relation to damage. You don’t have to assimilate out of your history, your languages, and your symptoms in order to do being. IOW, I listen to Latinx Trap’s poetics of low affects, the ordinariness of depression, and dark desires philosophically.

As Rican Traperx Bad Bunny’s tracks get more pop-py (selling choruses for fans to get hooked on singing back—¡chambea! ¡jala!), I drift back and listen on repeat to “Me Mata,” “Diles,” “Pa’ti,” and “Soy Peor,” where his sound enacts another order of papi. Not punishing papi of an impossibly ponte duro manhood, but of multi-colored stripes: hear the skirts in his skrrrts. And not skirts just as a metonym for one- dimensional jevas, but what’s in and under this other #latingang softer masculine formation. Note, this is not me saying something about Bad Bunny’s sexual identity. This is me saying: his sky-ripping, visceral gut-blow vocals that swarm a track; his ludic, Rican slang-slinging Spanish; his post-Drake and Caribbeanized orientation toward fílins; his sound’s reminders of the laments of 1970s salsa’s “Triste y Vacía,” “Periódico de Ayer,” and “Que Lío,” as well as his lyrics’ swerve from blaming womyn for encounters with his own feelings—all of this registers as a swerve of brown queer futurity to me. RIP to an impossibly duro masculinity that wants to control the story, the scene of possibility. RIP progress narratives. RIP developmental economic theories. Que vivan Dominican-Trinidadian-cum-Bronx Cardi B’s alignments with Tupac in “Best Life” and Selena in “Motorsport”—genderblurs, feminine growls. Que viva Bad Bunny’s lyrical subject in “Soy Peor” who refuses to ‘get better.’ 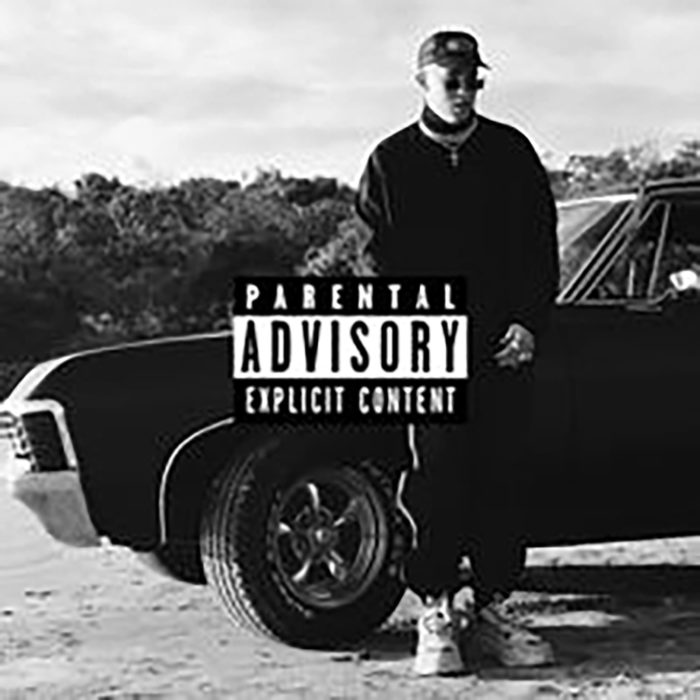 My sensorium reckons with “Soy Peor” as a politically vital feeling of the here and now. Not only does the track not try to make it better, but also it—heartbreak, loss, feeling fucked-up, or lingering in feeling fucked-up—landscapes the entire track around the pleasures of getting worse. Living worse. The usage of the verb ser is intense: “soy peor por ti,” AKA: suspend attachments to quick repair, perhaps, even, to reparations. If before “yo era un hijo de puta, ahora soy peor” por los traps del estado. And now what? Linger with darkness and see what our sensoria can do with recognizing feeling worse. The Count of Monte Cristo learned to see in the dark while he was imprisoned. Nat Turner hallucinated angel-battles of slave uprising from the plantation’s night. If we want to exit the false promise traps of neo-liberalism’s nation-shaped arcs of mejoramiento, reforme, and progreso, ponte Trap, ponte sucix, ponte peor. “Salí jodio la última vez / que en alguien yo confié” is not just the lament of a heartbroken lover, but of the bad and irreparably frustrated citizen-subjects torn up by NAFTA, by the Jones Act, by Arizona SB-1070, by forced displacements, and constitutive vulnerability—which is to say, living simultaneously in hiding and exposed. Made worse by the neo-liberal state’s perverse structures of representation of something like freedom—as if.

Interpersonal, explicit pleasures do not fix the state’s sadistic, bad-daddy, and betraying ass. But negotiating safe sexual encounters that risk what we don’t know before we act, between variable, brown, indigenous, and black subjects whose desires the state does everything not to serve, and living to sing about them, stages alternate scenes of resistance and vital possibility. We all may relate to the phrase, I don’t wanna go to the revolution if I can’t dance. Trap would agree. And it would swerve: I wanna dance and fuck on a dembow beat like accelerated plate tectonic shifts, into and after the end of worlds in states of dynastic decay. 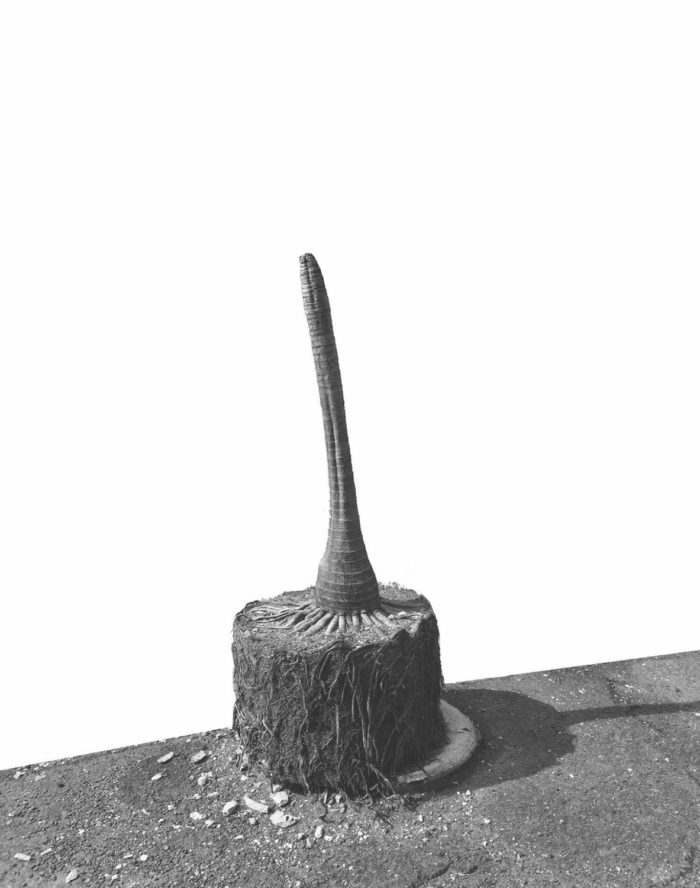 Deep in Trap tracks, I hear migrant fugitivity. I hear generations of displacements that aren’t lunging to concoct a political identity, but are singing some other sad song while tryna get laid. I hear them as un-fascist ballads in their insistence on feeling with loss and not turning away from pleasure even as we mourn. Thinking about feeling with Trap, my two poems below orbit emotively around migrant fugitivity. They mourn people, im|migrants, who I do not know, but have encountered through an aesthetic object and a story that made a news cycle in Long Island, New York.

The poem Una incógnita X, named after Che Guevara’s theories of the unspeakable, the variable in history, in wars between the poor and rich, is for lxs “2 o 3 muertit[x]s de Altepepa,” Mexico whom the 78-year-old woman Delfina Maruri Miranda invokes in Chantal Akerman’s film, From the other side (2003). Maruri Miranda tells the story of her son’s desires for reforme and mejoramiento for his pueblo that lead to his migration north and ends in his death forced by displacement. Her melancholia is backed by a green wall and threshold to a hallway where a young female child streaks across the frame, at one point; the child is not edited out. Life presents itself in various forms in a scene devoted to framing both life and death, and questioning the camera’s, television’s, media’s, and art’s roles in relation thereto. The old woman’s melancholia disperses into an attachment to the losses of her neighbors in Altepepa. The first poem, below, emerges from an interstitial sense of tenderness in loss. Akerman’s film situates Bach and the heart-wrench of Cello extra-diegetically behind select scenes set in the homes and fields of the Mexican subjects of her film-essay-elegy for the Mexican border’s crossers and the lost crossers’ mourners. I hear this unfathomably ordinary violence of forced displacement in Trap, in Kanye’s Yeezus, and in Dante’s Purgatorio, too. 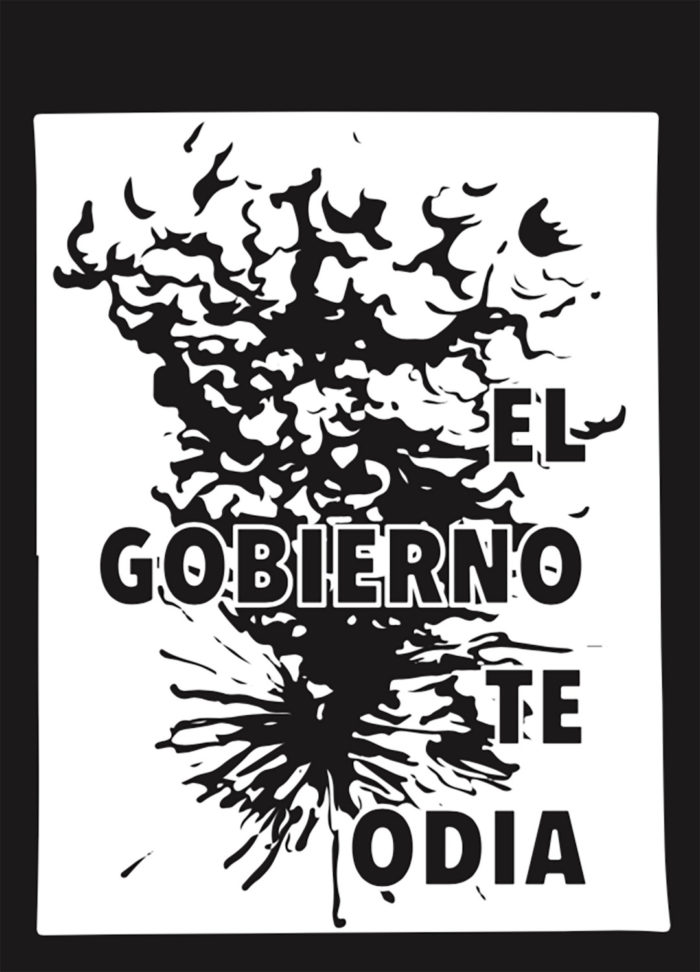 The second poem, “Aequa- tor Re-mapped II,” is for Marcelo Lucero, of Ecuador, who was attacked in 2008 by a mixed-race group of young men on Long Island, New York, where I lived during graduate school. A white-identifying man, Jeffrey Conroy, stabbed Lucero in the chest while a group of seven men attacked Lucero for “looking Mexican.” This was a common white supremacist practice of teenagers and young men in Long Island, to go “beaner jumping,” who align with the police by racially profiling subjects who “look illegal,” and jump them, beat them up, and, in the case of Lucero, murdered him. In the testimony to police, Conroy (who stabbed Lucero) said that what really made the group of “beaner jumpers” angry is that Lucero fought back. He ripped his belt from his waist and tried to defend himself from seven attackers. The poem fantasizes about Lucero fighting back. Below the poem, I offer the picture that Conroy drew for police of the crime scene, which I see as a legal as well as an aesthetic object. I position its (anti-)esthetic in profound contrast with several digital drawings from the imaginary of the Puerto Rican artist, archivist, and collaborator of performance and dance, Arnaldo Rodríguez Bagué. Alongside the poems is a series of images that Bagué designed during and after Hurricane María. They are improvised visuals that poeticize the discourses of geology and climate change from below the Atlantic Ocean. They think from below; they imagine other geological contours beside the chains of slaves and maroons that the Martiniquan poet-philosopher, Édouard Glissant theorizes connect one island to the other amidst the disconnections that comprise the Antilles.

Around these poems, I hear Bad Bunny’s haunting wooooo, ooooo that precedes the lyrics of “Soy Peor,” not necessarily as diegetic or extra-diegetic music, but as an ad lib, a cry that ruptures fabulation, when displacement, as we know, requires narrative, poetic, and aesthetic forms in tactics of survival. 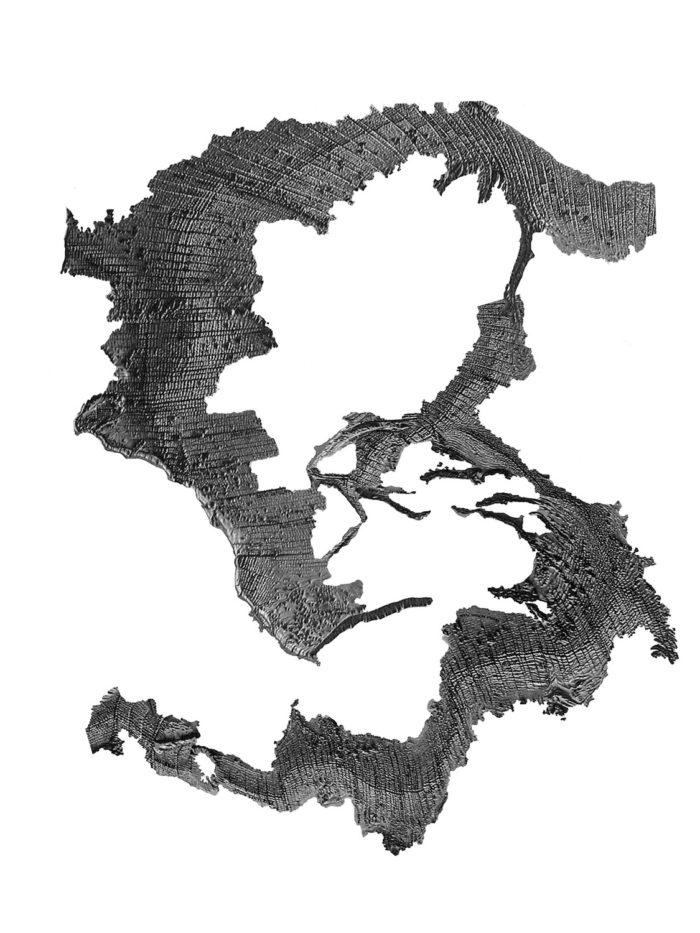 I
Sandy boots trod golden poppies under
foot. White hoodoos stalk due north. Badlands sprawl
northeast: don’t trifle with the coordinates of
hospitality. Across Sonoyta, not yet

in Yuma, nowhere near La Paz,
the one she loved breathed fever through cracked lips.
And the world fell silent under the sudden
shade of a lonely desert cloud. He remembered

his mother’s casa’s green walls, then fell.
They fell. Not dead as in altogether gone. The dead
do not stay dead. But salieron jodios before
they’d even started out. She’s lapped their ages

I’m getting my scream on. Enter the kingdom,
but watch who you bring home. Heaven relieved
them a fate hollowed out by coyotes, sent down a
chariot barreling to beat sixty. Redeemed, Phaethon

took a second chance at the reins, cut the angle
just right, swang low for their corpses lifted high
by the raised arms of the Graces and Our
Lady, who’d gone out to bathe by dawn’s light.

II
Unknown is exactly how much it would
have mattered if they’d been strapped with wings,
their by-any-means—white, feathered, Arch-X variables
not instead of but in addition to feet, plenty water,

and shelter—wooshing whirlwind benedictions
on the OG illegals of Arizona’s embittered earth: settlers.
To cross strange whiteness as luminous shadow-beasts.
For now they are delivered from the Law, that being
dead wherein they were held. 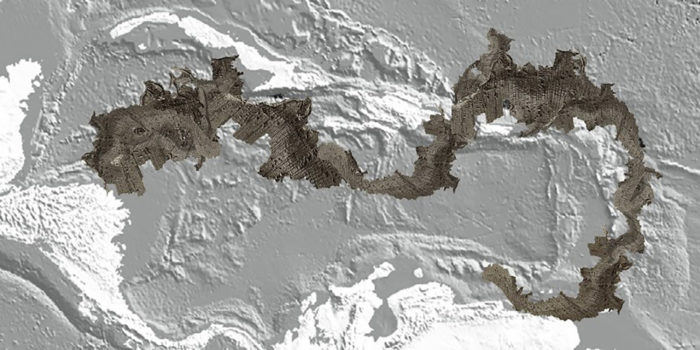 Whip lashed at the circling mob of beaner jumpers.
Rifling off years and injuries as it slapped the air
Like a crazed Third-World Jeopardy contestant.
Peeling back time
Suddenly it was like 1984, 1898, 1848, 1534
And the chronic   rough rides    strategized ritual market disasters     military base after
>Military base    after military invasion    desplazamientos    coups d’etat
Panamá as maritime real estate    Guantánamo as capital of
underdevelopment
Juárez as cemetery   Chiquita Banana   Bretton Woods   Tricky Dick   The Treaty of
Operation Wetback Bootstrap never happened.

What is, Never happened?
But it did all happen.

As the seven pressed,
Said, Try and get past us,
He remembered a refrain
Learned from a
Puerto Rican neighbor:
Ameríca, Ameríca, God shed
His grace
On thee? ¡¿Qué quééé?!
Ahora soy peor, soy peor por ti.
He thought, There but
For the grace of God
Go I, then cried,
Sweet Graces,
There are three.
Flexing his knuckles in his belt,
Said to the seven, Compassus.

Re-mapped,
El norte was not
The center of the world
But sublimated into the
Puerto Rican Trench.

*
X marks the spot where
Jeffrey Conroy stabbed
Lucero to death.
“Got stabbed by me,”
Conroy wrote on the attack map
Sketched for police.
Like death was
His gift to give.

Lucero’s belt was inadmissible
As evidence that
The world had shifted
Beneath their feet. 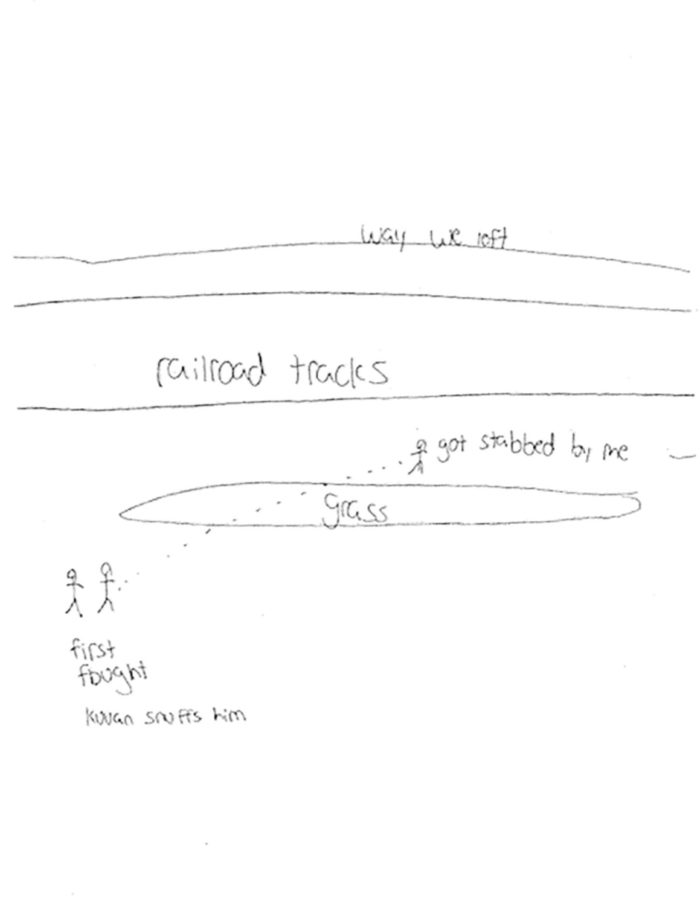