Kiki Mazzucchelli analyzes the use of fantasy and fiction in the Guatemalan-born artist’s practice, as tools to evoke and heal the turbulent memories of the Guatemalan Civil War. 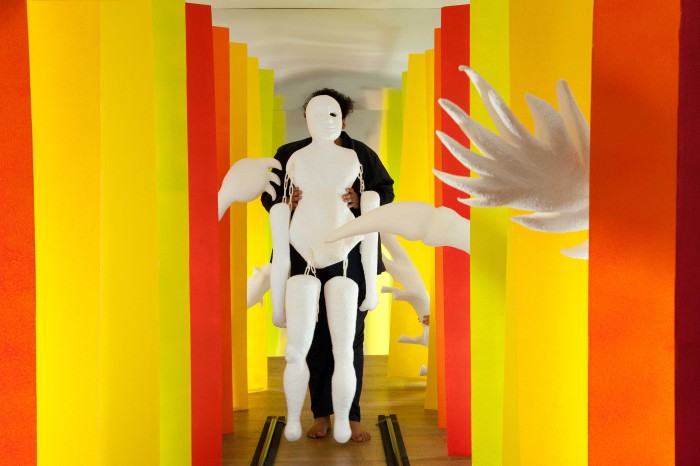 The film opens with a short corridor flanked by a bright orange and yellow sequence of vertical panels on both sides. From behind, elongated forms shaped like a spoon, an asparagus sprig, or a crab’s claw quickly pop out wavering up and down, as the camera travels forward, stopping before reaching the back wall. The artist enters the scene wearing dark blue pajamas and holding a white dummy whose limbs, attached to the body by chains, softly dangle as he walks towards the now retreating camera and eventually steps out of the frame. As the swaying props disappear after lingering for a few seconds, five children emerge from behind the panels carrying small cartoonish sculptures of animals carved in polystyrene with blobby shapes in the center that seem to represent their innards, and are painted in soft pastel colours. They attentively follow the artist’s instructions, clearly audible as if in a rehearsal; moving to the middle of the hallway and holding their props in front of them for a few seconds, counting to three, then hiding behind the opposite side, counting to three again. The voice then commands, “destroy!” and the smiling kids, clearly having a ball, tear apart the flimsy set and start smashing the objects. As they leave, the doll and the artist appear once more at the back of the frame standing behind the wreckage. Suddenly it’s dark, and a flickering electric-blue UV light intermittently shines upon the mannequin as it moves again towards the camera like a character from a ghost train. 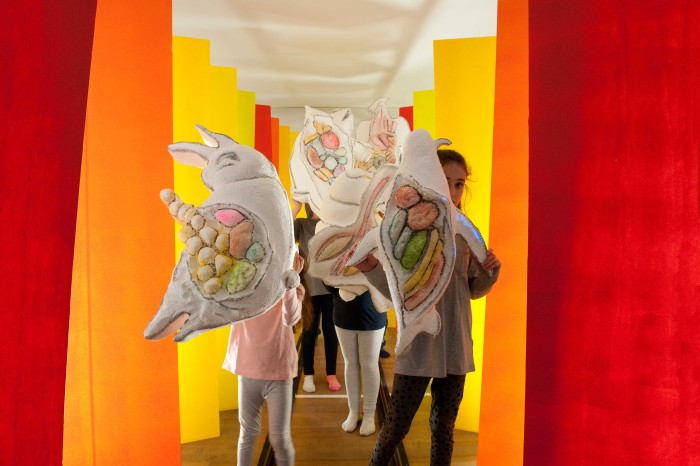 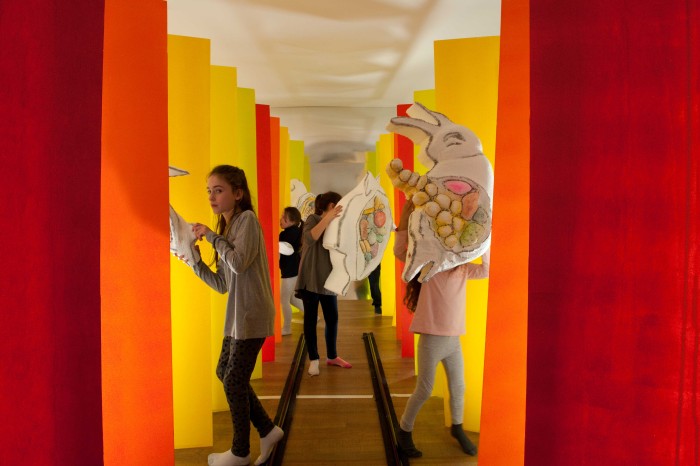 Illusion of Matter (2015), which was commissioned for the Tate Modern’s Performance Room, is like several other works by Naufus Ramírez-Figueroa in that it is informed by his early childhood memories of the Guatemalan Civil War (1960-96). Born in Guatemala City, in 1978, the artist fled the country in the mid-1980s at the age of six, shortly after his uncle, a 19-year old student activist, was assassinated. He first moved to Mexico along with his family, before settling in Canada as a refugee, where he completed a degree in fine arts. During the 45 years of conflict between a succession of repressive US-backed dictatorships and leftist rebel groups supported by ethnic Mayan indigenous groups and Ladino peasants, it is estimated that around 200,000 civilians were killed, tortured, or “disappeared” in what the UN Commission for Historical Clarification has deemed a state-led genocide. 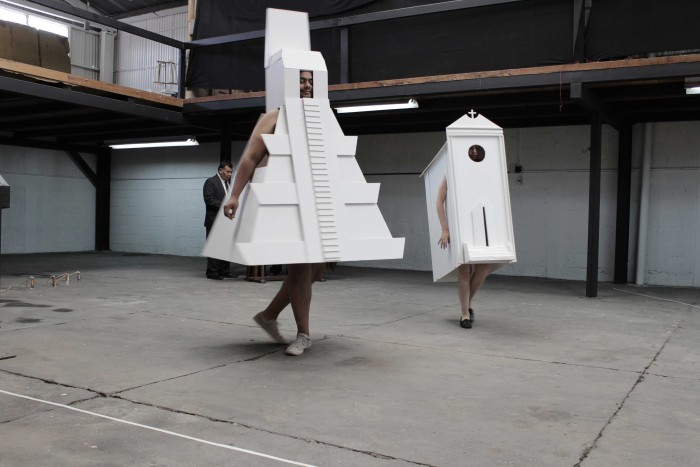 Although hauntingly present in Ramírez-Figueroa’s practice, this traumatic history is often evoked through the creation of a fictional, almost dreamlike, universe of images and situations that depart radically from an archival or documentary approach. In a recent interview, the artist recollected the day that he was informed of his uncle’s death [1] when he woke up in tears without yet knowing what happened, while somehow already knowing what was going on. Perhaps children of such a young age still don’t have the language to process their experience of the horrors of war and their memories remain as imprinted abstract sensations that can only be fully comprehended later, when we are able to put them into a wider context. Indeed, works like Illusion of Matter seem to capture exactly these types of imprecise yet deeply affecting memories, almost as re-enactments of the simultaneously candy-coloured and terrifying sensations experienced by the artist’s childhood self, from which he retains an underlying sense of playfulness. Even without being aware of this personal history or that the Tate work was performed on the personally significant anniversary of his uncle’s death, a detail that he purposefully kept unmentioned in the project’s press materials, one can clearly grasp the mixture of sweetness and darkness conveyed through the colourful set, the cartoonish polystyrene props and the spectral presence of the dummy. The non-narrative sequence of events that unfolds before the camera is at once absurd and funny, but ultimately leaves the viewer with the nightmarish image of a glowing skeleton-like figure that advances towards the camera at the end of the performance. 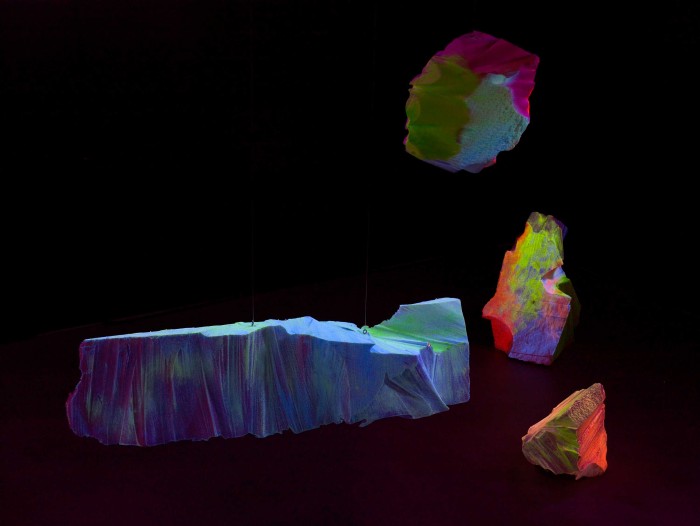 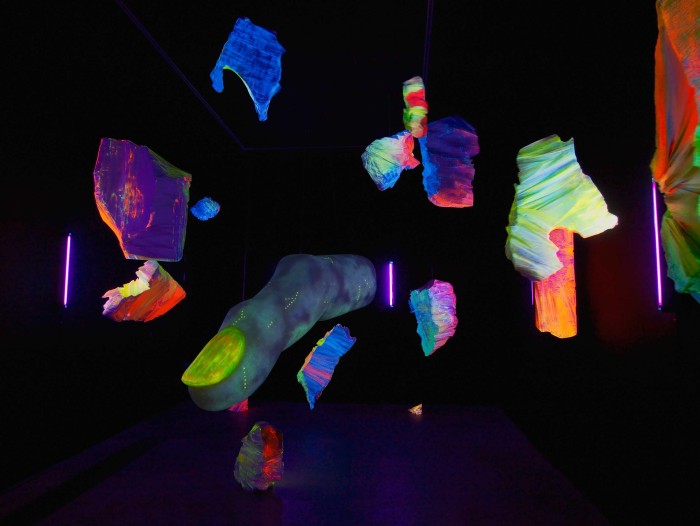 In the mid-1970s, Ramírez-Figueroa’s uncles were involved with experimental theatre in Guatemala, but increasing censorship in the following decade meant that actors had to pursue work in more palatable productions, such as children’s plays. Being an avid theatregoer, the artist remembers seeing his uncles performing in several of these plays. He also remembers hearing the words Corazón del Espantapájaros (Scarecrow’s Heart) regularly at home, not really knowing what they referred to but at the same time creating a sort of Wizard of Oz-like picture in his imagination. Some four years ago, the house where he had been living with his uncle in Vancouver burned down, and whilst drowning his sorrows in an alcohol-fuelled conversation with his nephew, the former experimental actor started to talk about Corazón in more detail. Written by Guatemalan dramatist Hugo Carillo in 1962, Corazón del Espantapájaros was loosely adapted as a piece of political resistance and performed in the mid-1970s by students of the Universidad Popular. His uncle also played a minor role in the production. The play caused such a stir among the largely upper-class audience, among which, inevitably, were government representatives, in that it deals with the persecution of political dissidents and portrays authority figures wearing clown make-up. Subsequently, it became the focus of severe censorship. Many actors received death threats, the theatre was shut down for a whole year and Carillo, whose original script hadn’t even been used, was forced into exile. 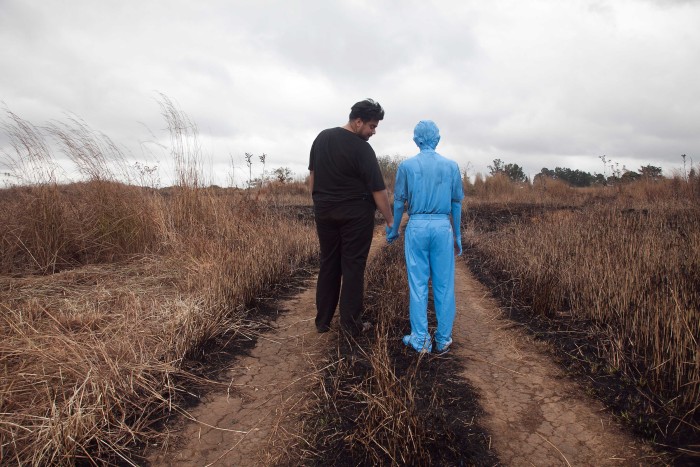 Suddenly, those mysterious words that had become imprinted in Ramírez-Figueroa’s mind started to gain a new meaning, one that connected his own early experiences with the wider political context of his home country. In a series of 2015 black and white aquatints that borrow the play’s title, the artist attempted to reconstruct some of scenes based on his uncle’s account of events taking place in 1975, since no photographic documentation could be found. These small, delicately rendered works are exemplary of his ability to encapsulate tenderness and terror in a single image. In one of them, a pair of scarecrows smiles hauntingly, their upper bodies emerge from what seems to be a field, or maybe a fire, executed in swift brushstrokes in several shades of grey that create a seemingly decorative texture. A flock of hummingbirds hover over their heads and it’s hard to tell if their presence is supposed to represent a benign omen or a Hitchcockian menace. A more openly eerie scene depicts a child hanging upside down from an ankle, hands tied behind the back, while a smiling man stretches an arm to lightly touch his chin as if to check for signs of life. The image, however, is ambiguous enough to suggest that the gesture can be interpreted as comforting, that the character’s grin is empathic rather than malicious. 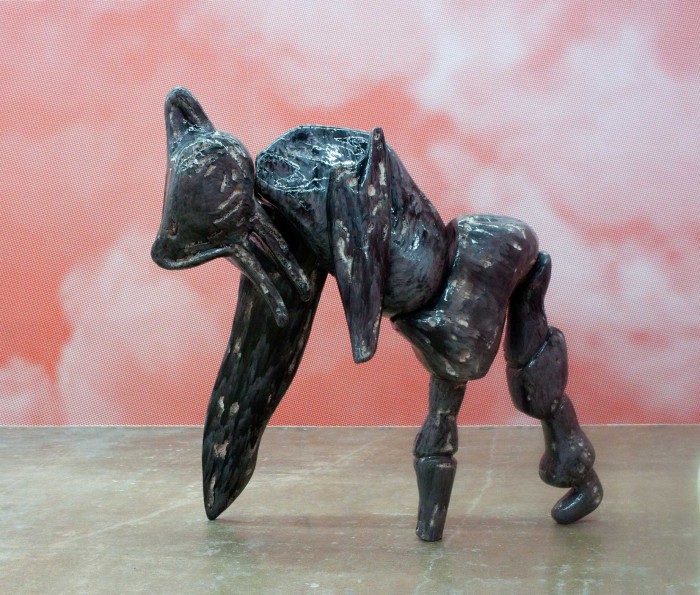 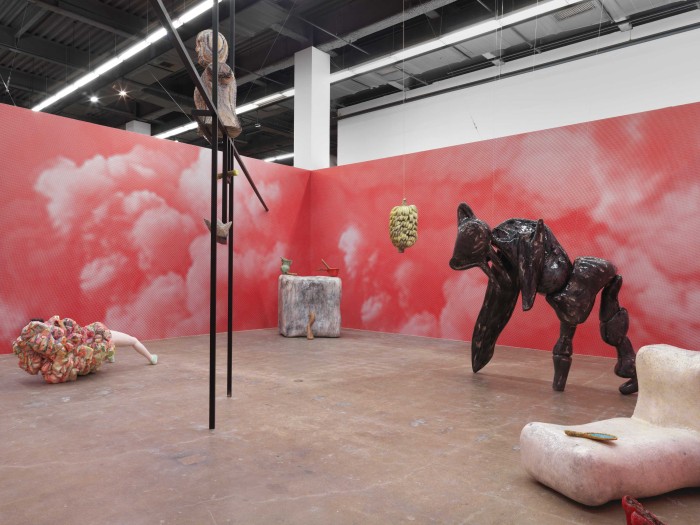 Ramírez-Figueroa has twice lost his frame of reference. First as a child in exile who left his country behind and recently when all his belongings, including several artworks and related documentation, were burned down in his uncle’s house fire. It is therefore understandable that many of his projects revolve around attempts to fill the gaps between enduring yet incomplete memories and forgotten histories. A case in point is Props for Eréndira (2014), a sculptural commission presented at the 10th Gwangju Biennial that was inspired by the homonymous teenage character from the Gabriel García Márquez novel, The Incredible and Sad Tale of Innocent Eréndira and her Soulless Grandmother (1972), who is forced into prostitution by her grandmother to repay her debts after accidentally setting her grandmother’s house on fire. Carved in polystyrene and painted in transparent washes of resin, this group of works included larger pieces such as a hanging banana branch, a rock-like volume from which sprouted a woman’s bare legs wearing light green shoes, a monstrous animal figure alongside reproductions of small personal items like a handheld mirror, a paper boat, and a pair of red high-heels scattered around the room. The material quality and treatment of these objects gives them an imperfect look, as if they are in a partial state of decomposition like the random belongings salvaged from a house fire. Once again, the connection with the artist’s personal history is explicit, but this seems to be only the point of departure in his works. 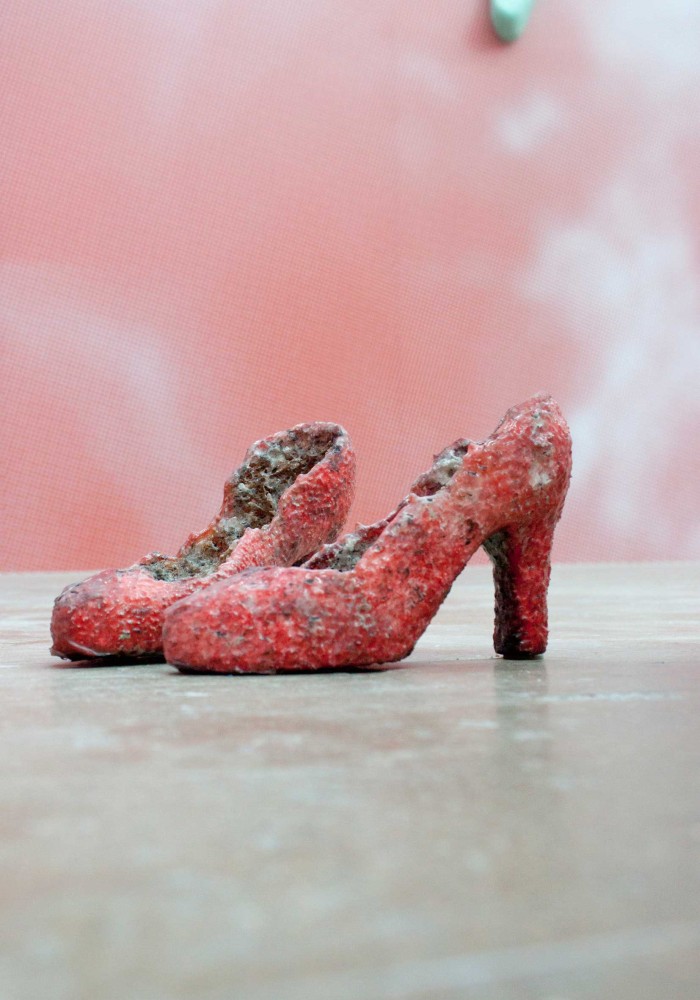 Ramírez-Figueroa is above all a masterful metteur-en-scène who gives form to the traumatic echoes of a lost past by creating striking images that simultaneously evoke an irreconcilable range of disparate feelings that speak as much of a violent past as of the turbulent present, although always with a dose of humour. Having been directly affected by the Guatemalan Civil War, the artist understands how much we are shaped by the inevitable intersection between the personal and the political. As the growing legitimisation of hate discourses, boosted last year by events such as Brexit and the election of Trump, threatens to be soon translated into increasingly divisive and possibly openly belligerent policies, the lives of millions of people across the globe are expected to be permanently marked by unpleasant memories. In their own bittersweet manner, Ramírez-Figueroa’s works are powerful reminders of the importance of the survival of lost images as weapons against a societal forgetfulness that may lead us to repeat the disasters of the past. 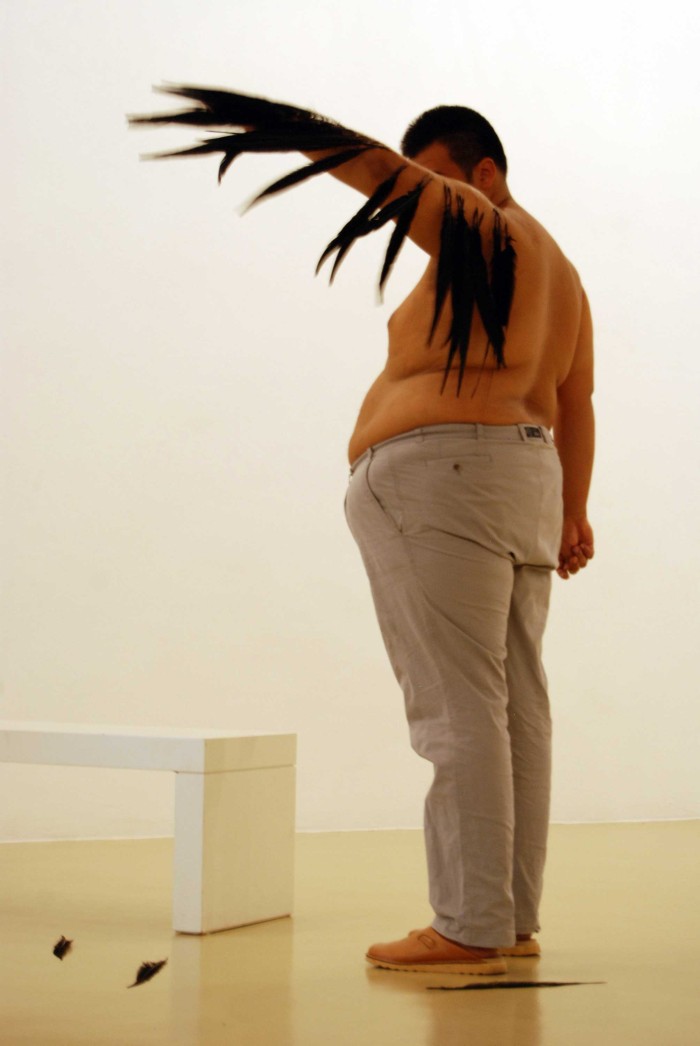