Beyond being a documentary media, photography can also be a sculptural and architectural field, as well as a space to reflect about painting. Departing from Fabiola Menchelli’s work, this text engages with the manifold relations between photography and sculpture, painting and architecture. 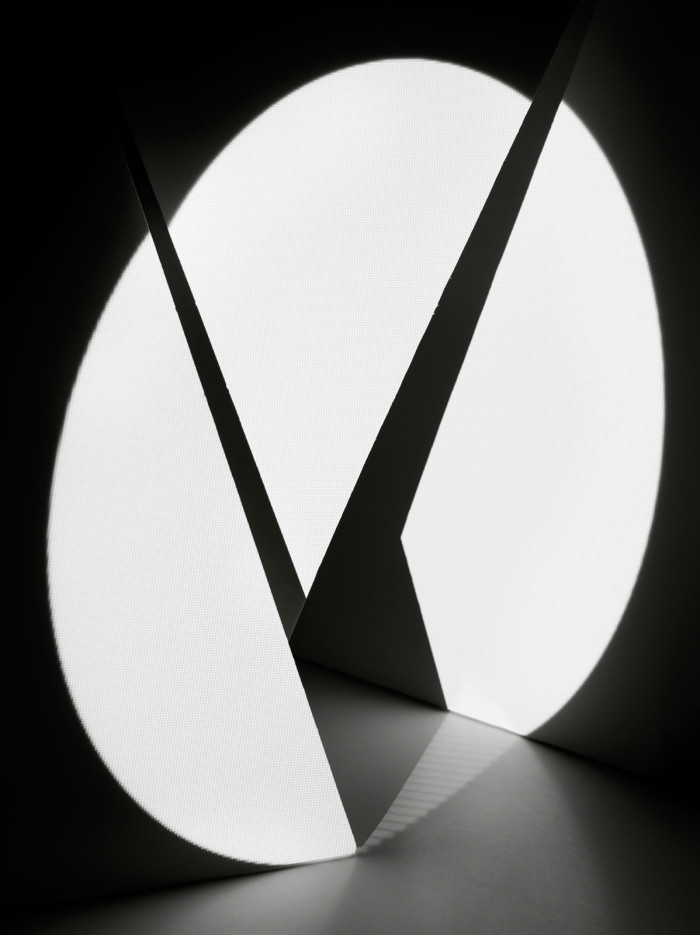 A ceaseless consideration of the photographic is one of the characteristics of the work of Fabiola Menchelli (b. 1983, Mexico City). She explores the relationship of photography to other media, such as painting, sculpture or architecture, and her practice defines itself in these interdisciplinary spaces.

In Constructions, a series produced in 2012 and 2013, Menchelli created a series of structures from cardboard and paper, onto which she projected a light that had been previously designed on a computer. The resulting series consisted of abstract compositions in which the play of light and shadow create different depths, at the same time revealing –and, on occasion, imparting– tactile qualities onto the materials.

The fragile and ephemeral structures she creates in the studio almost function like stage sets without a real support holding them, and are meant to be seen from one single angle. In this way, the light confers volume and depth on the structures, while at the same time giving rise to certain theatricality stemming from the play of shadows of the chiaroscuro.

Light is the central figure in these photographs. These are inscribed in a tradition initiated in the first decades of the 20th century by photographers like Otto Steinert or László Moholy-Nagy, who created light drawings in their images. It was Moholy-Nagy who took his interest in this element furthest, with works such as the kinetic sculpture Licht-Raum-Modulator (Light-Space-Modulator), or his series of still images created over two decades. In a similar manner, the photographs of Menchelli’s Constructions series take real objects to create non-figurative images, in which light has nonetheless taken on a corporeal quality.

As she concluded the Constructions series, Menchelli began a series of photos using the large format Polaroid camera, which allows for 20” x 24” images. This technology led her to work in an inverse manner from the previous series, as the Polaroid negative has very low sensitivity and thus one cannot obtain much depth before the image goes out of focus. 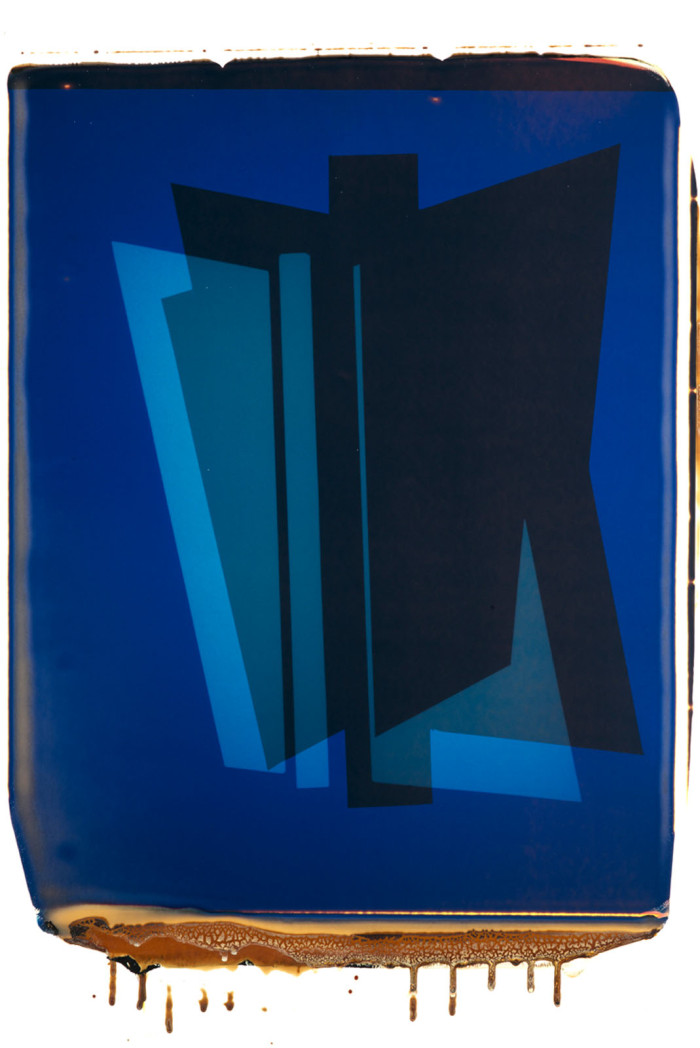 Faced with the impossibility of creating compositions with various depths within the studio – as she had been doing before – the artist decided to generate the depth inside the camera by way of multiple exposures. She captured her first image by using a totally flat paper mask illuminated from behind. Then, changing the mask and the color filter, she captured another one on the same plate. This system enabled her to generate an apparent depth in the images, similar to the one obtained in processes such as silkscreen.

The Polaroid series establishes a dialogue that comes closer to painting, whereas Constructions‘ approach and intention relate more to sculpture. Inspired by Josef Albers’ book Interaction of Color, the artist reflects on the oppositions existing between the color theories employed in these media. If in painting we may speak of a subtractive theory where the sum of all colors equals a dark tone, the color theory employed in photography goes back to Isaac Newton’s findings, stating that color is found in light and that the sum of all colors is white. This notwithstanding, Albers’ observations may be applied to both media.

The Polaroids constitute a series of abstract images; nonetheless, if in Constructions each composition was different, in this case many of the images repeat the same geometrical composition, changing only the use of colors and the relationships between them.

In the Polaroid series there is also an attempt to emphasize the chemical processes that are involved in photography. By not clearing the excess of the chemicals used in the printing process, the artist tries to make tangible and visible what happens inside a Polaroid camera. At the same time, it is a nod to the ‘dripping’ technique that has been employed in painting since the 1940s.

The fact that Polaroid photos are one-of-a-kind distances this series from the traditional notion of photography as a medium that can be infinitely reproduced and brings it closer to painting as a medium to produce unique pieces.

If the notion of the reproducibility of the photograph is what marked its difference vis-à-vis painting from the beginning, the possibility of duplicating images linked photographic techniques to other media such as architecture. Until the 1950s, photography formed part of the development of modern architecture, and it was used for procedures such as the creation of blueprints, so called for the blue color of the images used to generate copies of architectural plans. This photographic technique does not require a camera, as the printing is achieved by way of the action of UV rays on paper prepared with a solution of ferric ammonium citrate and potassium ferrocyanide. 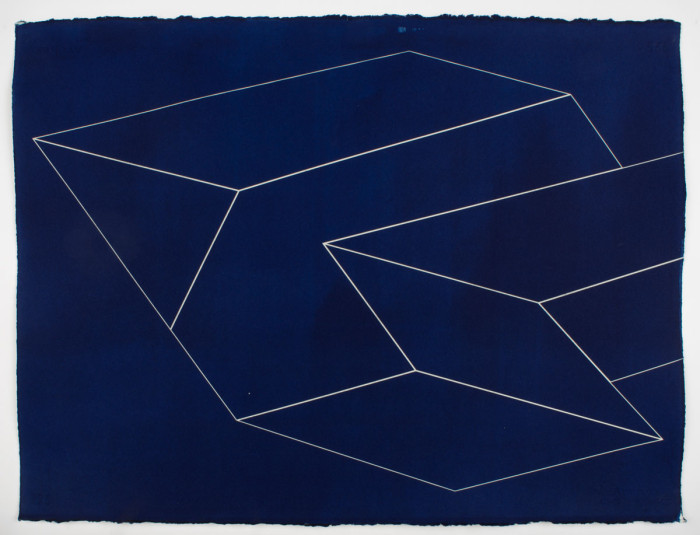 The relationship between the use of this photographic technique and architecture led the artist to think about these two media beyond the documentary relation. Menchelli produced a series where she starts out by imagining the architectural plane as a moment prior to the materialization of architecture – a reflection on the actions required before building. She considers the blueprint as a flexible space in which everything can be modified. All this led her to create what are much more than geometrical compositions; the images recreate possible architectures.

In this series she goes back to the imaging technique used in the Polaroid series based on paper masks superimposed on the printing paper. Here the depth of the image depends on the different intensities of blue obtained with different lengths of exposure to solar rays: the tones range from very faint to highly intense within the same piece thanks to the paper masks and acetate. Once again, light plays a key role, as it is the element that allows the image to emerge from the paper, while generating its spatiality.

Light and time are essential elements in the photographic process, and Menchelli makes them conscious in her work, in the production process as much as in the final images. In different ways, Menchelli’s work approaches flexible architectural constructions, which arise in the field of abstraction and can only be materialized through photography.

The premises of Menchelli’s work stem from photography itself, distancing themselves from the documentary conception of this medium and reflecting on questions that could be considered technical, such as the relationship between light and time, or the chemical processes that lie behind it. In her interest in the photographic, the artist also conceives of each place she works in as if it were a camera. If for Constructions the artist thought of the studio as if she was working inside a camera, in the blueprints series it is the space of the rooftop where her camera operates.

However, beyond a reflection on photographic language and the boundaries of the medium, we can perceive Menchelli’s interest in creating her own reality. Starting from concrete elements such as paper, card, acetate and even cement, she creates abstract compositions that function as fictitious architectures that exist only in photography. The photographic image is the reality where these structures inhabit. In this sense, perhaps Menchelli’s work has a closer relationship to theatre than other art forms: her images are stage designs for a fiction fabricated from aspects of reality.

Photos are courtesy of the artist and Yautepec, Mexico City.

In the midst of a siesta Gabriel Chaile and Duen Sacchi talk about the histories of fragility, the genealogies of forms and the possibility of inventing new meanings that mobilize symbolic and material transformations, appealing to the political commitment of the artists.

No one knows what a body that can't can do

From the wounds that mark the body, artist Elian Chali shares a network of possibilities regarding political spaces and aesthetic agency that make the flesh’s vulnerability vibrate.