Exploring the Antillean Subject: A look into the National Exhibition #7 in the National Gallery of the Bahamas examines the curatorial model of this biennial exhibition in Nassau, highlighting contemporary Caribbean artistic strategies and the influence that the writings of Martinican thinker Édouard Glissant have in the region. 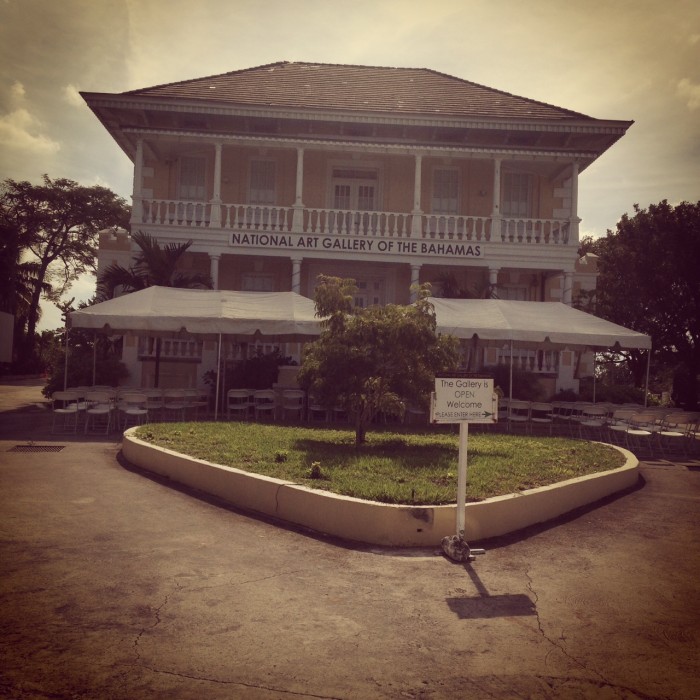 The National Gallery of The Bahamas.

In 1984, the Havana Biennial established a model for contemporary art biennials in the Caribbean, proclaiming itself as an exhibition of and for the Third World. The Havana Biennial addressed an international economic reality, and at the regional level it promoted cultural bridges for exchange across the many diverse islands that composed the Caribbean. With a similar impulse of speaking about economics and social realities, Antillean: an Ecology (2014-2015)  is the seventh iteration of a biennial program at the National Gallery of the Bahamas (NAGB) in Nassau, curated by Holly Bynoe and Michael Edwards. Continuing on an earlier history of approaching politics and art in the region, Antillean: an Ecology attempts to evaluate the cultural mélange embodied by the Antillean subject in terms of race and class, specifically in the Bahamas. This exhibition looks inward by focusing on Bahamian contemporary art to address a post-colonial context as an unfinished project that continues to determine the complexities of Caribbean life.

Located in the historic Villa Doyle, the NAGB is an elegant museum in what was a private residence built in the 1860s (1). Its facade embodies the accomplishments of colonial architecture in Nassau, while it also encloses the National Collection of Bahamian Art. In 2003, the NAGB initiated a biannual exhibition program as an opportunity to deal with themes that relate to the community known as the National Exhibition. Under the guidance of the institution’s Director Amanda Coulson, the National Exhibition features Bahamian artists and encourages the production of contemporary art. With 53 visual and literary participants, Antillean: an Ecology includes paintings, videos, installations, performances, and photos, showcasing the works of local artists, as well as others from Bahamian descent living in diaspora. Challenging ideas of nationhood, Antillean was the first time that this biennial included artists who were not born in the Bahamas, but have been living there for a significant amount of time. Conceptually, Antillean also takes into consideration the writings of Martinican writer Édouard Glissant and other Caribbean thinkers. Bynoe and Edwards put out a national call for works, requesting artists to send submissions inspired by Glissant’s concept of a rhizomatic identity, an approach to understanding Caribbean identity as a “multiplicity of roots that leap to the encounter of others (2).” Artists were asked to sail away from a rigid sense of identity in favor for conception of  “a Caribbean” –  a subject with multiple origins and whose identity is in constant flux. 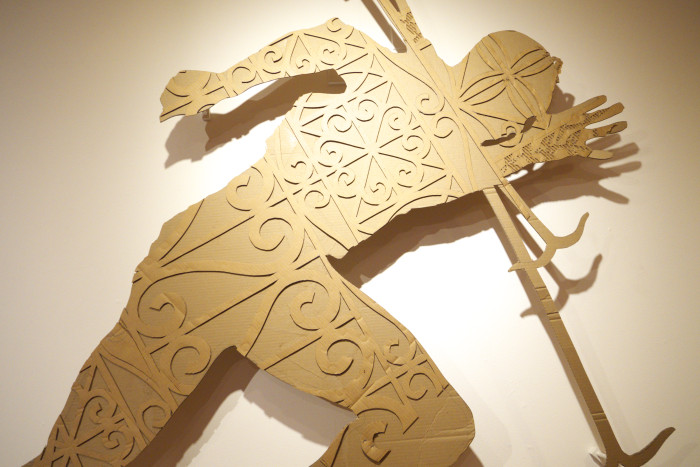 Several works in the show address the complex negotiations in which race is constructed and asserted in the Bahamas. In Higher Goals (2014), John Beadle used corrugated cardboard to create a series of male figures inspired by the metaphor of “Afro-athletes” such as Michael Jordan and Pelé. Embracing images of popular culture, Beadle’s athletes are chained to the symbols of sports, as they appear in motion tied to a basketball ball or a soccer ball against the gallery wall. Cardboard is commonly used in Nassau to make the celebratory costumes of Junkanoo, a traditional local celebration comparable to Carnivàle in Latin American countries (specify? Cada carnaval es distinto…). Beadle borrows from the performative aesthetic of Junkanoo to reflect upon how identity is performed and constructed in sports entertainment, focusing on the black male as a vehicle for over the top gymnastics and physical endurance that enables economic gains and plays a significant role in the public sphere. Arnold Joseph Kemp’s Untitled (2014) confronts the viewer with the artist’s personal collection of books about Black Art, African History, and Caribbean thought. Viewers can browse to use this collection and engage with scholarship about black experience and history in contemporary culture. Kemp’s approach attempts to create connections between the experience of identity in the Caribbean and the United States, striving to fight against the insularity that reigns in the Bahamas. Kareem Mortimer’s video work, The Naked Truth (2014) deals with the construction of race specific to the Bahamian context. This work shows a series of individuals being painted black or white. While one sees a black woman being painted white, one can hear a conversation of a white woman talking about her experience as a white Bahamian. Mortimer inverts the image to show the same white woman being painted black, while the black woman talks about her experiences with race. Using the charged trope of painting bodies, Mortimer creates a poignant visual contrast that speaks to ideas of representation and identity, illuminating the ecology of the cultural consciousness in this country. 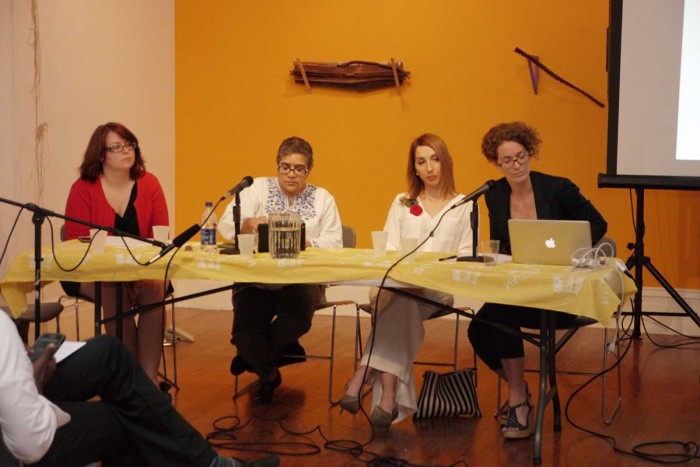 As part of Antillean, Edwards and Bynoe developed an educational program, a series of panels throughout the six-month course of the exhibition, where topics of blackness, white privilege, and local Haitian discrimination were discussed with artists, educators, and other members of the community. One topic constantly revisited in these sessions was the status of Haitians in the Bahamas, a minority group aggressively discriminated against in the country. Haitians have a history of migration to the Bahamas and tend to work low-income jobs. In a panel, Dr. Craig Smith from the University of the Bahamas addressed the issue to elucidate the Haitian as the “Unspeakable Blackness in the Bahamian Imagination (3)”. First, Smith considered how the Bahamas became independent in the 1970s and how this emancipatory movement developed in relation to Black Power Movements in the United States and the Caribbean. This movement also insisted that slavery was almost nonexistent in the Bahamas, which is an idea that some contest. Smith then reinterprets Haitian discrimination as the result of Bahamians being confronted with the “darker” side of the Caribbean experience, taking up the story of slavery and struggle. Smith’s analysis illuminates a peculiar phenomenon when speaking about the Caribbean postcolonial and fragmented condition. Undoubtedly, there is need for more transnational exchanges among the islands that encourages a deeper understanding of how we look and encounter one another across this geographical and political imaginary. 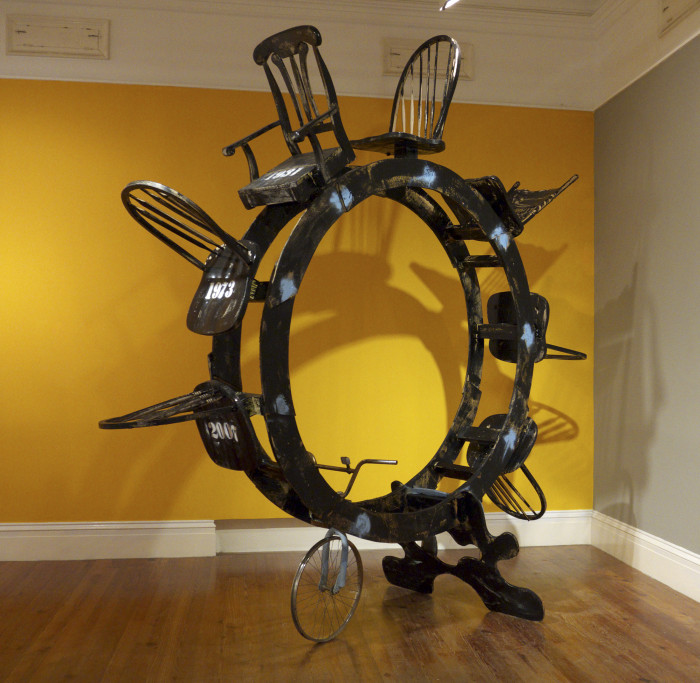 Antillean also showcases compelling works inspired by the complexities of the contemporary Bahamian context. John Cox, a leading voice in the contemporary art scene, created Go ask your dad (2014), a large-scale sculpture composed of multiple wooden chairs, bicycle parts, and plywood arranged in a circular fashion that resembles a ferris wheel. This work explores ideas of balance by gathering different objects connected by the sphere’s geometrical form. Other works such as The Other (2014) by Giovanna Swaby are composed of a three panel construction of canvas, which show portraits of the artists through the use of fabric and thread. This work is inspired by Swaby’s recent move to British Columbia, where she is pursuing a degree at Emily Carr University. When she moved to Vancouver, Swaby experienced cultural displacement as she now became part of a minority group. In The Other, Swaby builds on this personal experience, presenting herself by simply contouring her physical appearance, utilizing thread against the white canvas. Swaby also used different colored fabrics, alluding to the parts that composed her rhizomatic identity. 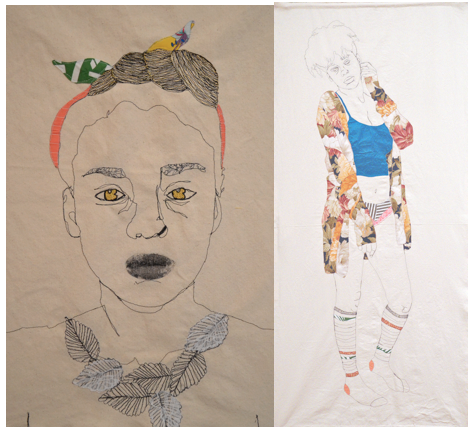 Giovanna Swaby, The Other, 2014. Thread and fabric on canvas. 36 x 84 inches each. Courtesy of the artist, Holly Bynoe, and Michael Edwards.

Presenting an overview on Bahamian production, Antillean: an Ecology follows the tradition of previous biennial models in the Caribbean interested in addressing the relationship between art and politics. In this case, Bynoe and Edwards used the writings of Édouard Glissant as a conceptual framework to guide their journey into the uncomfortable conversation of race and politics. Certainly, the exhibition confirms the need to speak about this dynamic in the Caribbean on regional terms.

(1) The location of the National Gallery of the Bahamas (NAGB) embodies the complexities of the social dynamics in Nassau. This museum is located on top of a hill, and at the bottom of this hill is the port where vacation cruises arrive with tourists. There is also a boulevard with luxury stores in this area. On the other side of the museum’s hill, there is an area called “Over the Hill,” known by locals as the inner city or low-income neighborhood. The NAGB sits between these two worlds.

(3) From an upcoming essay in the exhibition’s catalogue.