Can we build something out of nothing?

An account of the mission of The New Centre for Research & Practice and its intellectual enquiry towards the transdisciplinarity of philosophy, arts and sciences. 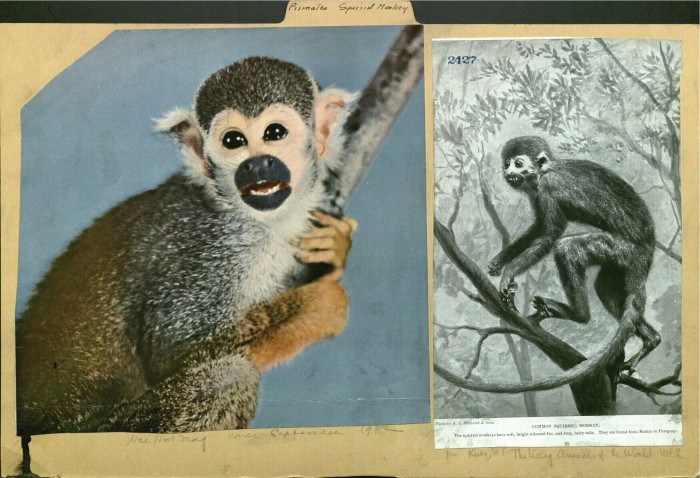 1. Early on in my graduate school research, I started to predict how hard it would be for me to exclusively work as a curator with artists and contemporary art once school concluded. Perhaps this was the reason I proposed to work with the archives of The Museum of Natural History Museum (AMNH) as both research and exhibition material for my thesis exhibition and major paper, rather than working with Iranian contemporary artists as I had promised to the selection committee and the University of British Columbia. Of course, that was before I discovered others such as Suhail Malik who were working at the same time on developing a rigorous critique of contemporary art, and in many ways challenging the research done by people like Peter Osborne on the philosophical basis and shortcomings of what we call contemporary art. 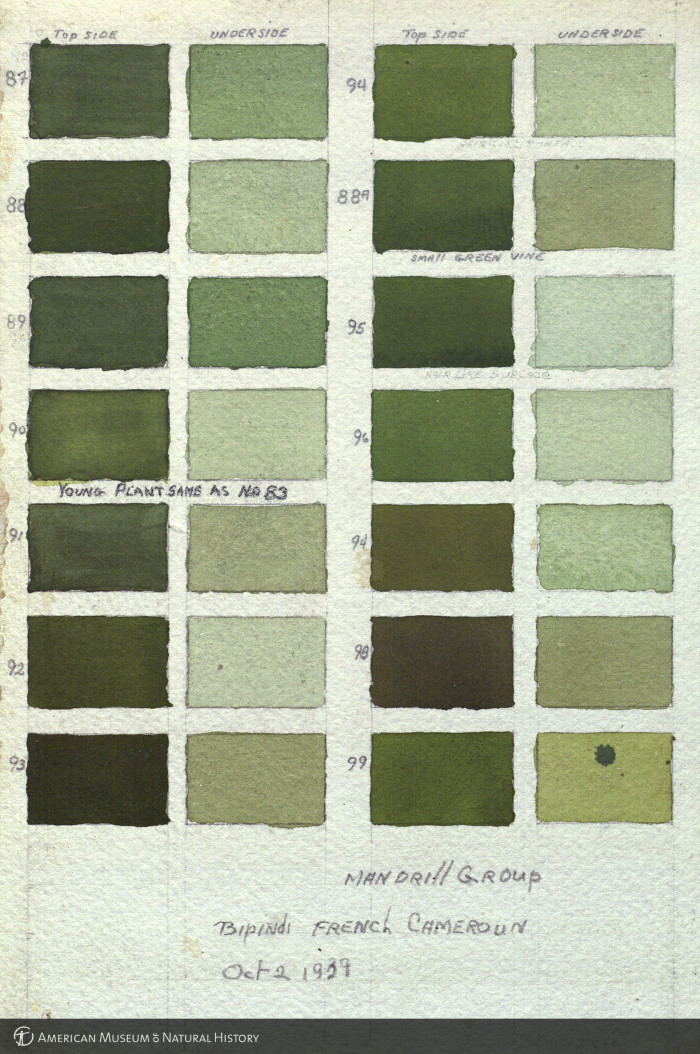 2. Working with AMNH archives provided me with a space in which I was able to focus on a far larger concept of practice we call knowledge production, rather than a smaller sliver of it we call art. This interest, which in the case of my graduate work, was totally entangled with excavating a particular prehistory for cybernetic interfaces in the context of the museums of science anthropology and natural history displays directed me towards two important questions which to this date constitute the core of my practice as a curator: 1. What are the impacts of telecomputation — the synthesis of computation and telecommunication — on planetary configurations of human subjectivity, our global contemporary worldview, and the earth system? 2. If and how these new modes of navigating the history of bio-techno-genesis, or the inseparable and codependent evolution of life and technology on earth, can be redirected from their current state of malaise and towards emancipatory purposes?

3. Not only was I lucky enough to begin researching these questions right before many other artists and curators showed interest in them. But also, that I was able to enter these debates from a more productive angle which neither embraced wholeheartedly the present state of technology nor rejected it completely. From my locality of the small Vancouver art world which showed no interest beyond Walter Benjamin and the Frankfurt School in regards to the question of technology, I was able to utilize the internet and social media in order to find interesting ideas advanced by scholars and artists with whom I could find things in common. In other words, telecomputation and its offerings from the get go were both the material substrate/condition of possibility for my research and its subject, hence the title of this text. This is how I learned to expect from myself and those around me the capability of making something out of nothing.

4. Making ambitious exhibitions with significant artists and thinkers that are otherwise financed with small budgets is like making something from nearly nothing. My exhibition Encycaonospace Iranica at Vancouver’s Access Gallery in 2013, which was conceptualized around Reza Negarestani’s reconfiguration of the relationship between rationality and computation in the context of modern epistemology was such an endeavor. In addition to the Iranian philosopher (who participated with his first U.S. public talk and presented two related drawings in the winter of 2012 at Miguel Abreu Gallery), it included works by a plethora of Iranian artists such as Abbas Akhavan, Tala Madani, Sohrab Kasha, and Gelare Khoshgozaran. The outcome was more like a practical workshop on philosophy and art rather than a purely visual exhibition of art. An amazing outcome from the exhibition was the start of my collaborations with the young Colombian filmmaker/artist Manuel Correa who became interested in the exhibition and the ideas presented, and went on to make #artoffline, a documentary about the problematic intersection between contemporary art and the internet featuring thought-provoking interviews with thinkers, scholars, curators, and contemporary artists — another something almost from nothing. The film was featured this year both at the Oslo Sculpture Biennial and the Bergen Film Festival.

5. My next project, the Incredible Machines, held at Simon Fraser University’s Downtown Vancouver campus in 2014 featured Suhail Malik, Reza Negarestani, and Alexander R. Galloway as keynote speakers. The project brought together a large group of artists and thinkers to discuss technology and its impact on the world. Facilitated and broadcast live over the recently upgraded Google Hangout technology, once again I tried to fully utilize networked computers and the social media as a platform for probing their ramification for the contemporary culture and beyond. What I learned from my first experiment with live casting my curated educational programming was that there would always be a sacrifice to be made either in favor of the real physical location where the actual event was held versus its online substitution. The success of what I programmed had a lot to do with the diversity (both quantitative and qualitative) that was represented at the conference. Many different people in the form of presenters and respondents had the opportunity to address the audience in relation to the many themes of the conference. While the project was seen as a total success by those who participated or followed online, the people who were present in the local venue were left dizzied and confused at times. At the same time, it was hard to catch everything, compared to those at home who could always rewind and watch the proceeding from the immediately available footage recorded on Google. This is when almost nothing starts to become even more consequential than the materially something. 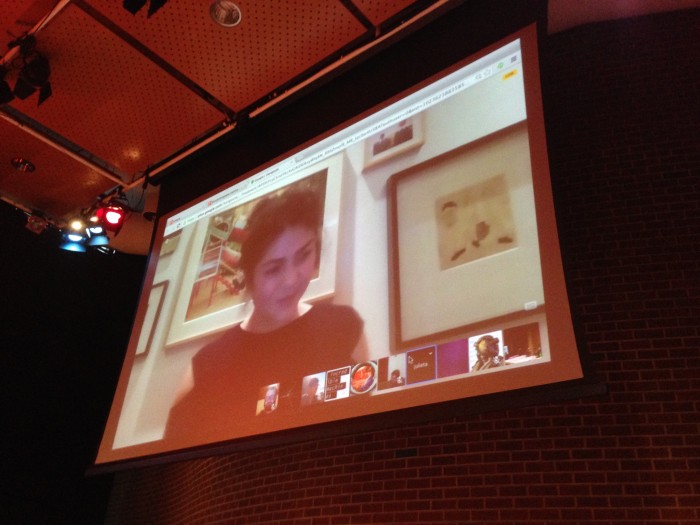 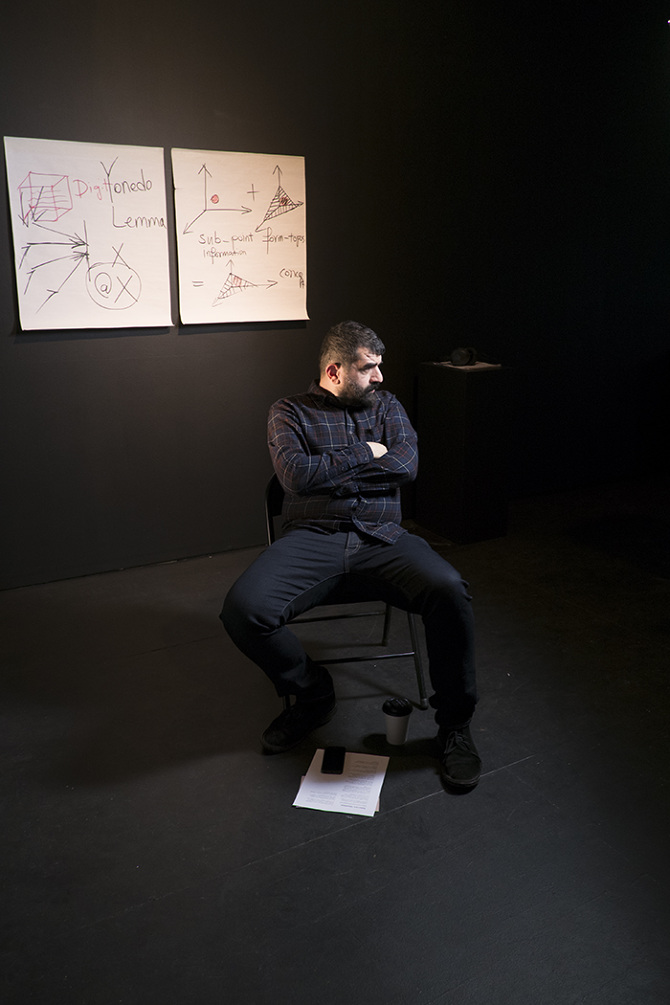 6. The success of the conference’s model and the opportunity I had of working with Jason Adams, a political theorist, and Tony Yanick, a philosophy student (PhD, University of Glasgow) with a background in computer programming (two talented, smart, and politically motivated people outside of the art world) on the project made it natural for us try to give a more permanent shape and structure to our achievements. We also felt that there was a truly global demand for a more regular kind of curating and programming of knowledge which was not available on a regular basis through the usual academic channels. Yes, the art world sporadically worked with interesting people, but these venues were not fully accessible online and knowledge in these settings was usually directed only in one direction — from the speaker to the audience. We began to think about the possibility of organizing graduate seminars that were not that far from their academic counterparts. We aimed to create a space in which the professors and students met to share their latest research with the hopes of creating collective knowledge on a regular basis and based on our previous experiences. Additionally, we felt that by patching together consumer level technologies with very minimum programming expertise we could potentially create an online research institute worthy of the name.

7. I co-founded The New Centre for Research & Practice together with my colleagues Jason Adams and Tony Yanick, first and foremost due to our common interest in philosophy and theory, in particular their contemporary and emerging forms. Although we didn’t all come from the same philosophical background, we nevertheless shared the desire for new intellectual spaces and new forms of research and development. The broader impetus, of course, was the sidelining of theory in academia due to the restructuring of higher education around neoliberal presuppositions. But it was also clear that the most advanced forms of theorizing were coming not from any one institution, but from the interstices between them that had been created by new technological and economic conditions. Beyond this, the new technological conditions which were giving rise to new modes of thinking that we were interested in also played a central role in the conception of the institutional form of the New Centre. They provided a rationale for The New Centre to exist as a primarily online institution, rather than trying to pay homage to the traditional brick-and-mortar format (which would have been financially impossible anyway). Thus, ‘the new’ became a central thematic for us, both in terms of content and in terms of form. The New Centre initially focused on online seminars. These were taught face-to-face via Google Hangouts, and Google Classroom – a lightweight, sleek alternative to Blackboard. So, for instance, in our Xenofeminism seminar, we had Lucca Fraser from Halifax, Helen Hester from London, and Amy Ireland from Sydney, all teaching under the collective nom de plume Laboria Cuboniks. Despite the instructors and students coming in from far-flung locations around the world, the form of the seminar was comparable in many of its features to that which might be expected at a small-scale liberal arts college dedicated to small classes and rich interaction between students and professors. 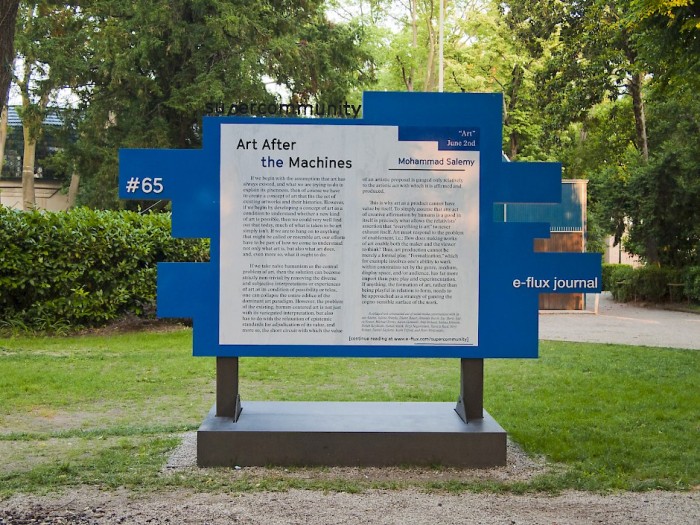 8. We explicitly state in our mission that we are not a university or college, that we do not offer degrees now, nor will we in the future. We also do not use the language of classes and faculty, but we speak of seminars and instructors. This is because we seek to function as a platform that can operate more dynamically inside, between, and outside traditional academic institutions. The network-based medium we are utilizing becomes especially important here, because we try to turn otherwise rather isolated experiences in a particular field (or, from the perspective of an individual student or professor, isolated experiences at far-flung brick-and-mortar institutional sites) into a constructivist ecology of research and practice. By connecting those experiences spatially, we also accelerate them temporally, as more people are able to get up to speed with what is currently happening in the world of theory, and are thus able to contribute to those developments with greater intensity. A great example of our collaborative work with other institutions was the organization of responses to the e-flux Supercommunity project for this year’s 56th Venice Biennale, which took more than three months to plan and execute. This project allowed us to pair individuals with thinkers and scholars from our community and selected by e-flux for their special journal. These back and forth conversations were featured on a daily basis on e-flux’s online platforms, generating conversations which reverberated out from their original context into social media. We are not interested in the point of view that argues only for para-academic institutions while trashing traditional institutions. Our logic, instead, is that of the ampersand — & —.

Ways of doing: actions from TEOR/éTica

Looking back, artist Pedro Marerro identifies milestones in art history and pop culture that contributed to the negotiation of his identity as a male individual with motor disabilities in the face of stereotyped and almost nonexistent representation of “other” corporalities.