How can artists offer solutions for addressing collective trauma? On the tenth anniversary of Hurricane Katrina and the federal levee failure that devastated New Orleans, Cameron Shaw talks with artist and educator Saul Robbins about his “How Can I Help?” project and “dedicated listening” as a tool for healing. 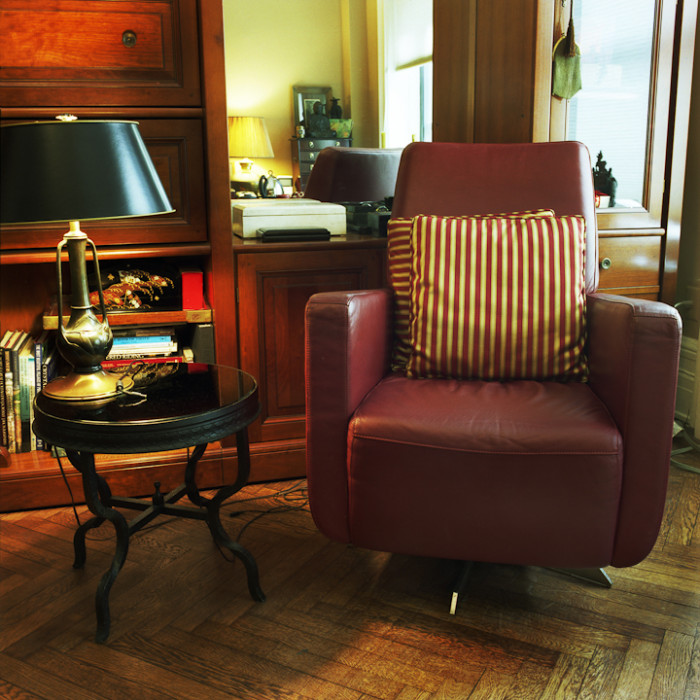 I met Saul Robbins in May 2014 when he was visiting New Orleans with his wife. We had coffee one morning and then met up again the next day over beers. I found it uncommonly easy to talk with him. His manner is a mix of affable and concerned, and when you speak, you can both see and feel that he is listening. I was not surprised to learn over the course of our conversation that Robbins is engaged in an ongoing listening project, which he calls “How Can I Help? – An Artful Dialogue.” On two occasions in New York City, where Robbins lives, he has set up a temporary office where he invites strangers to sit and talk with him about anything they would like for free. The project grew out of his practice of photographing psychotherapists’ offices in Manhattan, and he has hung these photographs on the walls both times he has set up his own temporary office.

Though the conditions are distinct, Robbins’ earnest belief in the transformative power of listening resonated with many conversations I was having in New Orleans with artists and community organizers about collective trauma in the wake of Hurricane Katrina, the federal levee failures, and the tremendous change that ensued. Robbins and I began talking about how his framework -to create a free, safe space for listening in an unexpected place-could offer an opportunity to bring together practitioners who use varied tools for healing to further conversations about the availability and access to mental health and wellness services for all people in the city. Robbins and Pelican Bomb, the contemporary arts organization where I serve as Executive Director, are now in the earliest stages of research of how to realize such a project. On Robbins’ most recent visit to New Orleans, we sat down to talk about the project’s past, knowing its future remains a work in progress.

CS: You began photographing inside psychotherapists’ offices in 2004. How did you become interested in these otherwise private spaces?

SR: I became interested in this specific interior environment while “in treatment” with a psychotherapist on the Upper West Side of Manhattan in New York City. Over time, I began to question things about this man and the role he was playing in helping me work through challenges in my life and relationships. While I found some of the work we did together helpful, over time his responses to my problems seemed to be more about him and his life choices than about my desire for greater autonomy and self-assurance. I became fascinated by how his office surroundings and the particular chair he sat in reflected interesting and humorous details about him.

CS: What were some of those details?

SR: The room was plain and unattractive with wall-to-wall carpeting, old posters advertising museum exhibitions, and a kitschy table lamp that looked like a plant from a Dr. Seuss book. There were flowers in his office that he never took care of. During one visit, when I asked why he didn’t throw out the dead flowers, he replied, rather glibly, that they belonged to the woman he shared the office with–who I think was his wife–and that they weren’t his responsibility. I found that comment revealing. As I began to examine this man with my own naive version of a personality assessment, I thought about how well his personality matched the chair and décor. What would that chair look like without him in it? What would speaking to the empty chair feel like? Did I need this space to talk freely or did I need him as the listener? So, without explaining myself fully, I asked about photographing the office and he agreed. 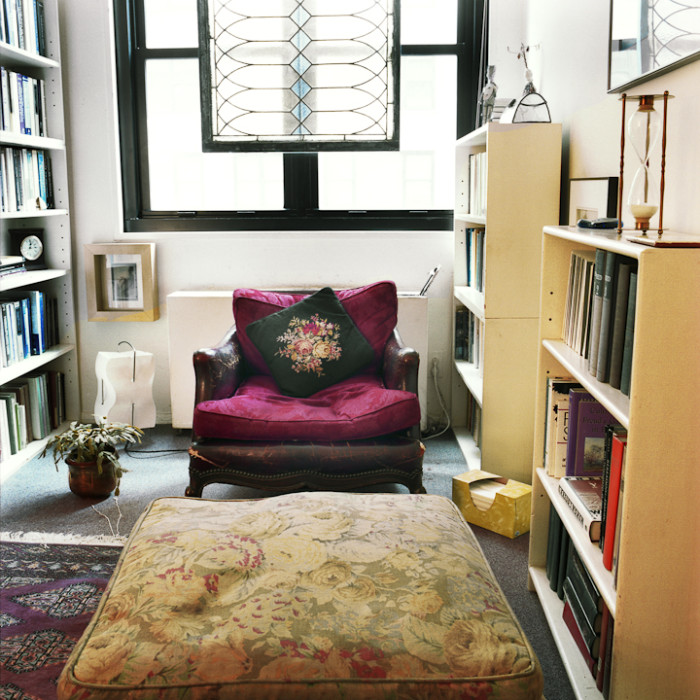 CS: It sounds like the project began with a negative experience. How then did the idea of photographing chairs transform into you taking on the role of a therapist in “How Can I Help? – An Artful Dialogue?”

SR: Throughout the last decade, my work became more rooted in personal experiences, especially those related to loss and unity, with “negative experiences” providing the genesis for new ways to see, think, and respond creatively. Many viewers of my photographs projected their own histories and expectations of psychotherapy onto the chairs with comments such as, “that’s just like my therapist’s office” or “that’s so Upper East Side.” This was my hope, but I began to wonder how I could take this work further.

Personally, I have found it hard to sustain meaningful social interactions and long-term friendships in New York. Unfortunately, the relationships I was having with therapists didn’t fulfill this need or answer my questions about building more enduring friendships. I think about how many people live alone in the modern world, without a steady relationship and the wonderful banality that comes from living day-to-day with someone. And I often wonder how my life and the lives of others would be affected if we made more time to stop, talk, and listen to each other–not just about problems but because we want to connect with, and hear about life itself.

As I was thinking about how to further this work, I was also teaching photography multiple days a week and noticing that many of the interactions I was having with my students, in and out of the classroom, were so intimate, honest, and emotional. The subjects they were bringing to the classroom through their images were literally and metaphorically reflective of their own existential searches and desire for greater self-awareness and connection. The empty chair brought me to one stage in my work and personal development, a very introspective one, but the desire to connect more fully motivated the next stage. 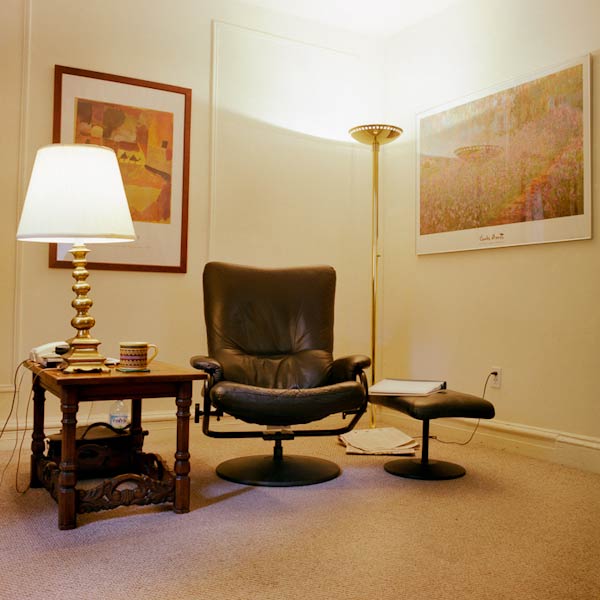 CS: In “How Can I Help?” anyone can come in off the street and reserve time to speak with you one-on-one and in complete confidence for free. How do you approach an individual session?

SR: There’s a lot of logistical stuff that happens before I can begin talking with a visitor. First, I ask everyone to read and sign a release form that states very clearly that our meetings are one time only and 15 minutes long. It’s important that people understand that I am an artist and that I am neither trained nor licensed in any way as a psychotherapy professional. I also want them to know that if something difficult or challenging should arise while we are speaking, I can refer them to professional services in their area. I take very seriously what we are about to create together, but I don’t want to lead people on in any way about who I am or what I am doing with my artwork.

When we’re ready to begin, I like to ask, “How Can I Help?” or “What’s going on?”. I want to learn where people are coming from without pretense or assumption. As they start speaking, I listen carefully and objectively, asking questions when necessary so I can keep up with them and their train of thought. When I speak, I hope to offer something valuable and substantive to help my visitors gain a new perspective on what’s going on in their lives.

CS: What sort of effect does this process seem to have on those with whom you’ve met?

SR: One of the professionals that I have consulted with about my desires and intentions with this project has said that the average number of sessions people need to make some sort of change is one. One. Because it seems that the moment we decide to seek help, even from some guy in a shipping container at a photography festival, something positive can happen that allows us to see things in new ways, to see that some sort of change is possible. Whether or not that change can be sustained is up to the visitor. And I know from my own life experience that it takes a lot more than initiating something once to make change–to get out of a bad relationship, to end addictive behavior, or to create more personally satisfying outcomes for our lives.
This project is ultimately about meeting and speaking with people in ways that allow us to be more honest, more real, more thoughtful, and more responsible about how change might come about. We all have experiences of meeting a stranger with whom we connect suddenly–on public transport, at the gym or park, waiting in line somewhere, talking at a club or bar, or at a religious service. Some of these meetings have been extremely profound for me.

CS: How have people responded to your time together?

SR: I have encountered very few critics of “my practice,” and the therapists I know who hold professionalism in high esteem have been supportive of my pop-up office idea.

The response has been extremely positive both times I set up the office. I have had a few visitors who seemed to see our interactions as entertainment. Even with those visitors, I simply ask, “What’s going on? What’s on your mind?”. By taking that direct approach, the discussions move away from confrontation or silliness. As I maintain this focus with the project, there is less room for anything but an earnest meeting between two people.

CS: How did you go from performing this task on your own to working with others?

SR: I have always performed “How Can I Help?” with other artists. I’ve invited specific people to participate with me who share similar values about human interaction. Each of us has the office for a specific amount of time, say two to four hours, and is then relieved by another colleague.

CS: You are exploring how the framework of “How Can I Help?” can be applied and expanded in New Orleans, creating a temporary space where visitors can engage in other activities beyond the brief one-on-one sessions for talking and listening. How are you thinking you will approach adapting the project in a new city with a new set of conditions?

SR: I am equally excited and unsure what to expect in New Orleans. It will be different from how I have worked until now, meaning exclusively with artists. I’m looking to connect with licensed psychotherapists and other professionals working with diverse healing modalities, such as dance and movement therapy, peer counseling, writing, meditation, and music. New Orleans is a complex and demanding place, and there will be many new challenges, but I am here to listen and to learn from local experts. I hope that working together can yield something greater than a one-time event.

Our world is vanishing (A phenomenology of disaster)