The historical relation between Brazil and the artistic movements derived from live arts has evolved considerably from it’s more “centralized” beginnings in the 60s to it’s current practice which spreads throughout the entire country. Despite it’s inevitable change at the hands of time, the one thing that remains unchanged is the use of body language as a way of protesting the sociopolitical context of the country which has given birth to many of today’s most prominent voices in performative arts. One cannot speak of the Brazilian performative art scene without mentioning VERBO, the country’s leading performance arts festival which concluded its 15th edition this past July.

Beginning in São Paulo on July 9th and concluding in São Luís, Maranhão on July 18th, this year’s edition was the first to be presented in two different cities, a dialog between territories and perspectives brought together by the festival’s curators Marcos Gallon and Samantha Moreira. Ranging from a simple gesture with meaningful connotations, such as Lia Chaia’s Troca De Sorrisos in which the artist handed out printed smiles for the audience to wear, to more viscerally poetic works, such as Lucimélia Romão’s MIL LITROS DE PRETO: A MARÉ ESTÁ CHEIA in which the artist overfilled a pool with countless liters of blood-like liquid while sounds of gunshots mixed with testimonies related to recent fatalities of black individuals under the State’s oppression blasted through the speakers, the 15th edition of VERBO stood out for summoning an absent body or a somewhat missing nature through various perspectives which collide with the country’s tumultuous past and it’s uncertain present.

As a narrative exercise of the living body in action that presents itself in front of others, we invite artists D.C., Tieta Macau, Lucimélia Romão, Lia Chaia, Rafa Esparza and Elilson—who were part of this edition of VERBO—to a cross-writing that brings together the performances of each one of them under the common thread of the presence/absence of several identities or “bodies” which manifest themselves through a single individual who reenacts the essence of their nature and seeks to free it’s attachment to a contradicting society such as Brazil’s. 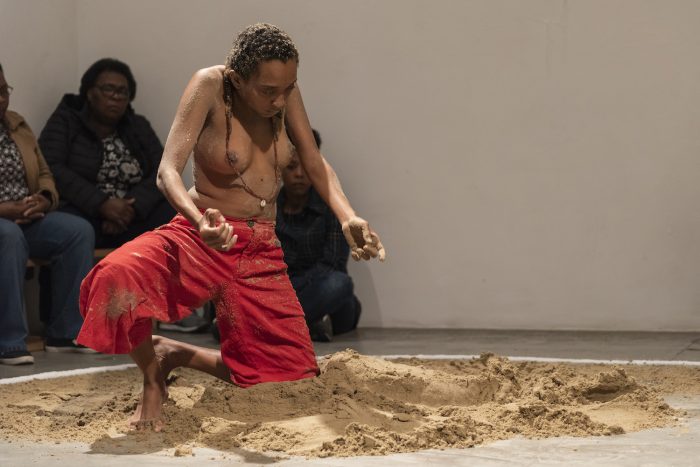 D.C. about Ancés by Tieta Macau

DE/COLO/NIZED:
Liberation process, to deny that which transforms the body into an object.
The act or effect of decolonizing.

DES/OPOSITION/NEGATION:
For Fanon, decolonization is the colonized subject’s capacity or process to say no, a negation that transforms the subject into a political one. This way, the colonized body is no longer an object but, instead, it converts in a subject, owner of its history.

The simplicity; rough, impolite, natural; without education. This is the process of decolonization, of returning to the origin, of being natural. Of returning to that simplicity which is not domesticated, or that does not let itself be suppressed.

One of the Eurocentric ideas was that of domination through the domestication of the body, mind, and spirit. Thus, decolonization is that which says no.

TIETA, impolite, insults the owner of her history, which is not whiten. 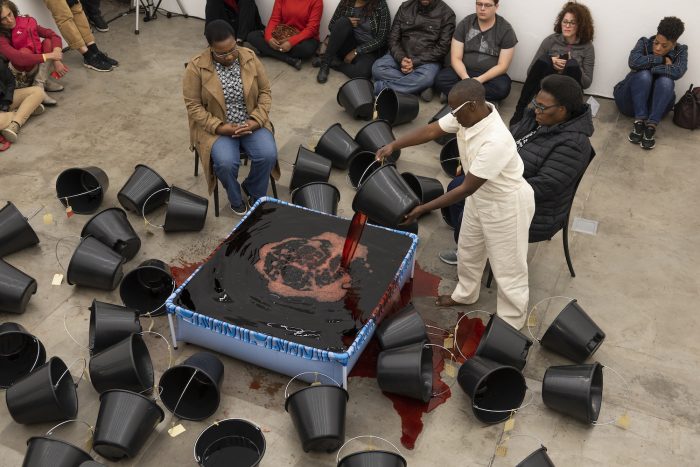 A thousand litters of an overflowing tide that sluices from the damp eyes of mothers, blood drains from the walls filled with white narratives. Lucimélia, black; her mother and her aunt, black; black are the women that blossom. With each buzzer, with each drop of the seven litters of thick, red liquid, we are dragged into the naturalness of BLACK genocide and, as Abdias and Negro Bispo suggest, regardless of the regime, the “CLEAR” intention was to expropriate us, of taking what is ours. To even rip off of the black body the experience of death as an ancestral vehicle. Litters that sprout out of those that are left and those that leave, those whom wash with pain and run in prayer to Aruanda, so that she can carry her own. That is the only certainty that we can have. Accusation. The tide is full, it soon progresses. 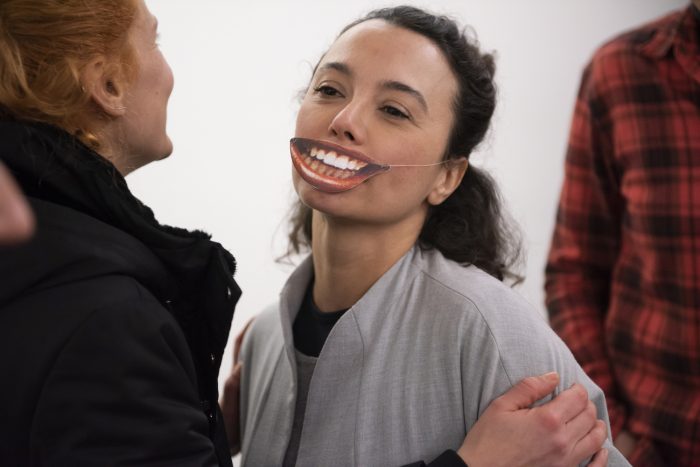 Lia and her smiles were spread out. Mini-masks of smiles were given to all the people that were present. A simple action of great effect. In just a few moments the atmosphere was transformed, contaminated with smiles and even laughter. The smiles, which varied from the natural to the unnatural, allowed for closeness and affection between the passers-by. To smile is a human necessity, a movement that carries great significance within itself. A manifesto for better days. The comfort that the artist offers us travels against the path that follows Brazil today. 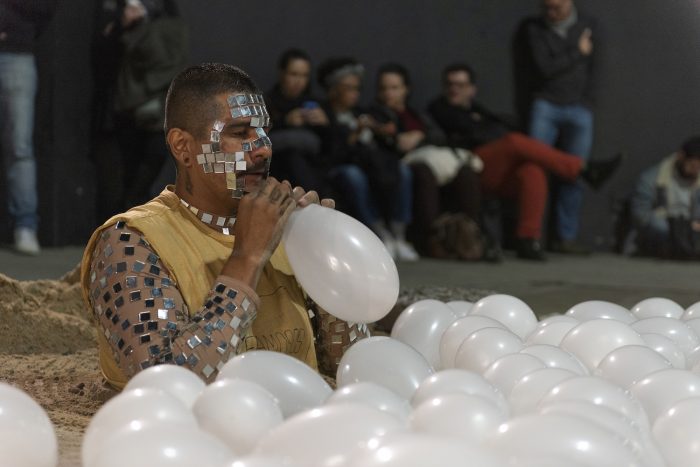 Lia Chaia about no vine a morir by Rafa Esparza

In no vine a morir [I didn’t come here to die], Rafa Esparza, with his body covered in small mirrors, has walked from the city center of São Paulo to the patio of Galeria Vermelho. His body reflects the light of the city. Outside of the gallery, his movements take him to a previously opened hole in the concrete floor. His feet sink towards the center of the earth. His legs act as roots. Without sinking his torso, the artist inflates dozens of white balloons until exhaustion. The air extends his lungs and the artist detaches himself from the earth. He breathes, lives and resists. 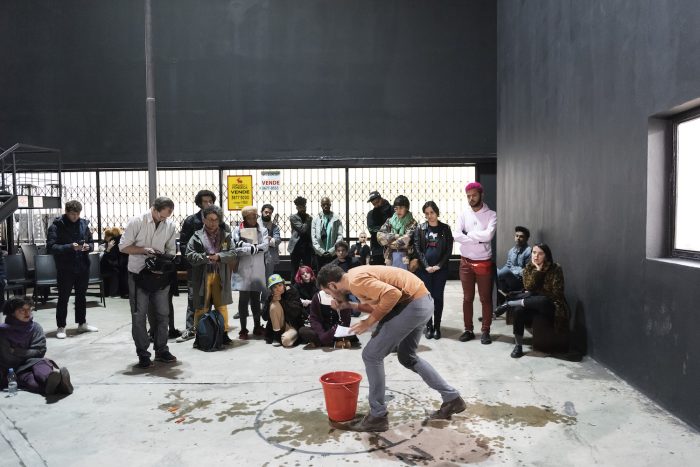 I made my way to the bar to grab a drink while I waited for the performance to begin. In the middle of the driveway stood a tall slender man holding at his side a red bucket. There was people walking about. Through the shuffling of their moving bodies I saw someone pour water from their container into the red bucket while they greeted each other. I’d soon learn that the man holding the red bucket was Elilson, the performer that people began to gather around as they poured out of the gallery to witness his performance titled Gota: exposição oral 20 [Drop: oral exhibition 20]. The performance progressed through a reading of Elilson’s text, a collection of accounts of homophobic events ranging in violent expressions, intermittently punctuated with Elilson taking a step backwards with the bucket, placing it in front of him before he’d reach in with his hand and drink a fistful of water from it. People’s expressions clued me in as to what the text was conveying through the emotive affect of his writing. At moments people would smile, giggle, frown, grunt, or hum in agreement; attentive at all times the audience was huddled closely around him with the majority of them sitting on the floor creating a tight oval around Elilson. At the end of his reading, he grabbed the bucket, lifted it up to his lips and took a long gulp; he slowly brought it down to the ground and tipped it letting the water spill out towards the crowd. Quickly people stood up to avoid being touched by the rapidly expanding leak. And just like that the intimacy that gathered around his reading was ruptured with the very material that drew everyone’s attentive spirit towards Elilson.

Gota: exposição oral 20 is one of Elilson’s most recent iterations of the work that he’s been building which first began years ago. The power in his work is an important aspect that materializes away from the space where the reading occurs, in local streets and sidewalks where Elilson spends the day collecting water from strangers; the water that he then consumes as part of his performance. This ritual seemingly simple is loaded with meanings and connotations that implicate society’s humanity. In big metropolitan cities where panhandling is as common as the skyscrapers that abound in the density of their landscapes, how often are you asked for spare change? How often do you spare it? And how often are you asked for food? Water? These questions remain dialectically conversive with what Elilson offers up in his writing. An unlikely exchange that harnesses people’s generosity from one place and into a cleansing ritual of sorts in another. Elilson’s drinking is an act of healing, a bathing, a rinsing of an interiority, a mouth doing the labor of speaking the truths of homophobia in a political climate where trans* and queer bodies are made even more vulnerable through the hate mongering rhetoric of self-proclaimed homophobic president Jair Bolsonaro. [1] Fear of escalated hate crimes since he’s been elected permeate amongst marginalized communities, and rightfully so. Dubbed the Trump of the Tropics, Bolsonaro has also advocated for police to kill criminals more freely. Elilson’s use of water initiated as a public demand for accountability in the school he taught at where a homophobic graffiti Viado bom é viado morto (A good fagot is a dead faggot) appeared one day on campus. He took to school grounds and asked students for water that he collected and used to scrub the graffiti off the wall. His quiet yet subversive request for water from strangers amasses power and weight as his bucket fills up and is transformed through his public testaments, through his queer body, into a substance, a material inextricable from it’s origins-potentially homophobic, hateful, potentially a threat to Elilson himself that provides hydration and soothing when spoken truths that are hard to swallow are made visible. However herein also lies the challenge of accountability; it is a task we must all participate in, in witnessing the ugliest and horrid realities that we all as humans have the potential to enact and become.

Elilson calls on the resilient labor of transformation and the labor it takes to maintain change a constant force; for even while we hold water collected in the spirit of generosity, it is precarious and can easily spill and be wielded to break the work of building a space, a community, a world through compassion, attentive seeing, and deep listening. 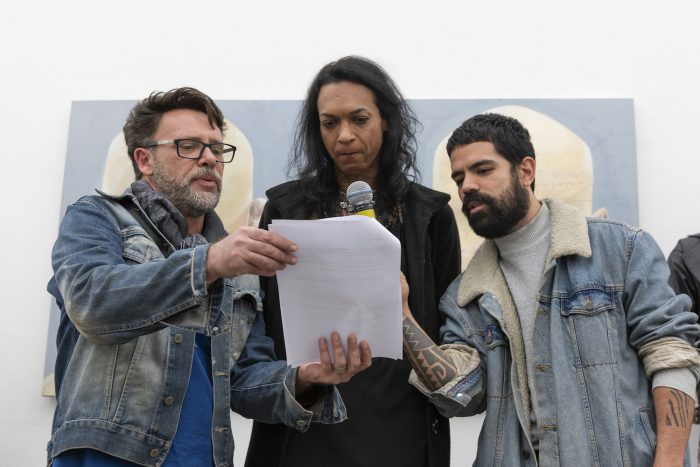 In Confessionário, D.C. shared a text with the testimonies of 50 of the 230 white, middle-class guys that had sex with Bianca, their transvestite heteronym. The story demonstrates the extermination policies of the Brazilian government that legitimize the forced heteronormativity in which LGBT peoples are killed daily.

For the reading, they summoned women, blacks and LGBT peoples, bodies that are vulnerable to the violence of a white cis-hetero-patriarchal State. Completing the chorus that verbalized the voice of that who kills, a shift on the idea of dissonance: two heterosexual cis men, for just a moment, become the minority. Behind their heads, two paintings that represent the minds of the narrators offset many of those who came to see the performance: a normalized and unscathed mass before the violence that kills those who assume life as an expression of multiplicity.

[1] Bolsonaro has advocated for parents to beat the gay out of their children, and in an interview in 2013 stated: “Yes, I’m homophobic—and very proud of it.”