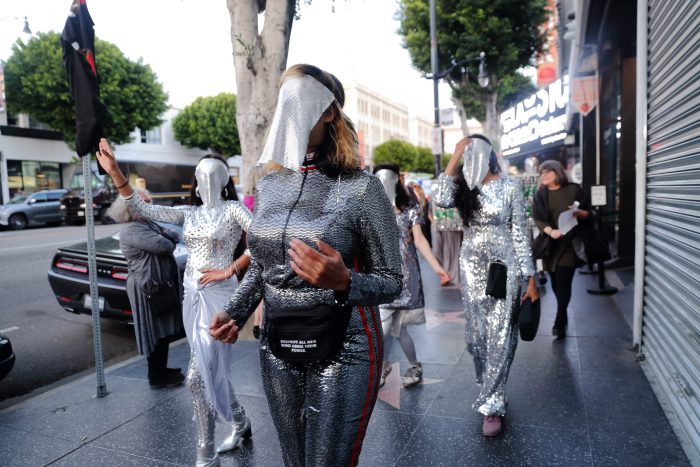 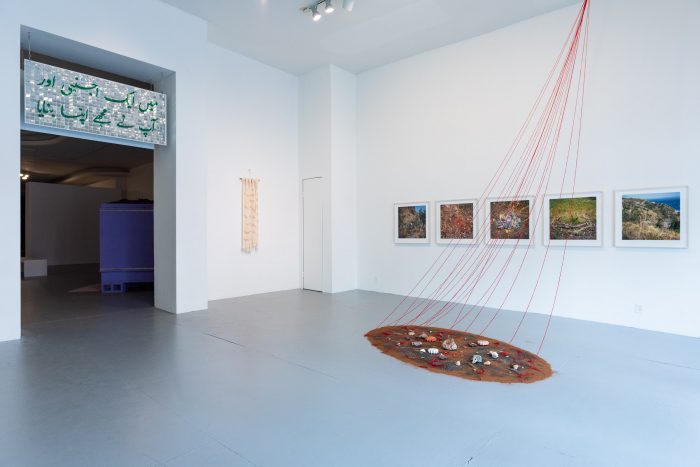 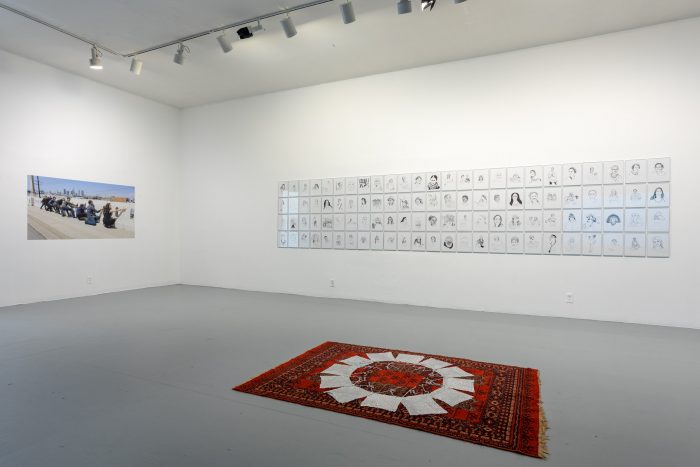 A Quipu or Khipu is a device made of dyed, knotted threads—an ancient Inka, multisensory, extinct language, quipus are the vanished narratives of resistance that this exhibition and public programming. Unraveling Collective Forms knots together artistic reflections centered around collectivity, autonomy, and group manifestations that crack systems.

Artist Cecilia Vicuña defines a quipu as “a poem in space, a way to remember, involving the body and the cosmos at once.” The artists featured are tracing—from their own geographies and contexts—discursive paths that connect with collective forms of resistance. La mirada (the gaze) is directed toward indigenous groups, specifically their ancestral and present knowledge and comprehension of their worlds. Their living luchas (struggles)—and their group organization—that shape and confront capitalist machines are the spirit that accompanies this exhibition.

Chanccani Quipu by Cecilia Vicuña, is a point of departure where the Andean universe and Western world clash with one another. Mercedes Dorame ties this land—the one inhabited ancestrally by indigenous groups—with spatial projections of reimagined Tongva ceremonial heritage. At the far end of the gallery, Pulso (2016) by Tania Candiani resonates with pre-Hispanic drums from the guts of Mexico City, its metro system. Carolina Caycedo shares My female lineage of environmental resistance (2018–2019), a collection of portraits of 100 eco activist women that make visible their bold dangerous work. Sky Hopinka situates us in Seminole land in Florida, at the historical moment of forced cultural assimilation and the escape of Chieftain Coacoochee from prison. A tapestry, Punks en contra del Sistema (2016) portrays a hyperlocal underground scene in the 1990s in Guadalajara, revealing fierce organization that evolved into anarchist and feminist projects. The Haitian revolution and the Black Panthers social movements are strings that Jeannette Ehrles cross-references and elevates in visual forms. The 6th Expanse (2016), a photo by Harry Gamboa Jr. features a moment of resistance, literally holding the now demolished 6th Street Bridge in Boyle Heights, ground zero of anti-gentrification. Mónica Rodríguez and Jorge González have created a collaborative space to experiment with processes of learning and exchanging knowledge via popular weaving traditions from Puerto Rico and anarcho-feminist Luisa Capetillo’s readings. Demian DinéYazhi’ threads intergenerational indigenous knowledge with radical queer feminist identity. Kim Zumpfe has built a space of pause that allows us to disconnect from the outside rhythms of the crumbling world. In a first gathering at LACE, Tanya Aguiñiga invited women to explore tactile transmissions while knotting and dipping cord into black dye, resulting in a work-in-progress that will culminate in a celebratory event. Arshia Fatima Haq’s artifacts from Ajnabi Milan (Strangers’ Union) a procession of SWANA (South West Asian & North African) diaspora led by Fanaa on Hollywood Blvd, shimmers into the gallery with a message of alienation and inclusivity.

Unraveling Collective Forms and the programming open quipu/quipu abierto looks to create a space to gather, remember, learn, and connect with the audience in a common thread. It is an invitation to interlace our own narratives in a khipu, to become talking knots. It is a way of both stringing together, and unraveling possibilities to reimagine ourselves.

For the closing of Unraveling Collective Forms, LACE will present An Infected Sunset, an ekphrastic long-form prose poem first conceived in August 2016 in the wake of the Orlando nightclub shooting, police killings of unarmed Black men, and in the midst of the Standing Rock #NoDAPL Resistance. During the writing of the poem the settler colonial nation-state elected the 45th president of this colonized country, which revealed a sudden revival of extreme white supremacist nationalism. As the social and political landscape evolved, the LIBERATED POEM emerged as an offering to Indigenous communities and landscapes striving for a decolonial and sovereign future emancipated from white supremacist capitalist hetero-patriarchal settler colonial trauma drama. This performance poem is a reflection on queer sex, survival/death politics, indigenous identity, settler and heteronormative romanticism, environmental injustice, and the importance of honoring community.