Dear readers, colleagues and friends, The possibility of Terremoto closing makes me very sad and produces in me a sense of vertigo. In the two years that I have been working as editor of the magazine, Terremoto reveals as a field of potatoes: a decentralized net that makes the geopoetics of America, this invented continent, […] 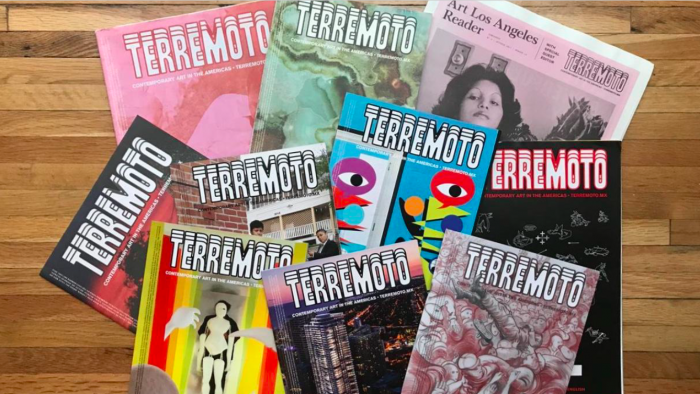 The possibility of Terremoto closing makes me very sad and produces in me a sense of vertigo. In the two years that I have been working as editor of the magazine, Terremoto reveals as a field of potatoes: a decentralized net that makes the geopoetics of America, this invented continent, flow. In this territory, despite the differences, we inhabit a contradiction: we are, but we have never stopped finding ourselves. A human condition that intensifies due to sociopolitical and cultural circumstances. In this continuous search, Terremoto has allowed the recognition of what is shared and what is alien to us among those who inhabit the artistic field.

Both inside Terremoto, with its incredible team, and outside of it, I have met fantastic people who have often transformed my own assumed certainties pushing me to keep questioning, so that the abundance of reflections can be revealed as a potency resource before the disruptive power of capitalist mediocrity. Since having the privilege of editing, I’ve been trying to aim for the common by continuing to invite people whom we deeply respect and admire. One only needs to see the indexes that have been built since Dorothée Dupuis and Natalia Valencia inaugurated this editorial project, which continues with the tradition of Latin American magazines through friendship, solidarity and respect based on the recognition of the experience of artists, curators, philosophers, poets, historians, writers, collectives, independent spaces, institutions, bookstores and publishers. Colleagues and friends. Thus, we have managed to publish around 180 essays and conversations with more than 300 collaborators that have gradually formed a sample of critical reflection in the region, necessary visibility in light of the fascisms that arises and that underestimates critical thinking.

In the last year, Terremoto has grown, either to expand our chances of fundraising—providing editorial services through Temblores Publicaciones, for example—or to continue with our mission of dissemination—as is the case of the exhibition program La Postal, focused on research around archives. As a still very young non-profit printed magazine, bilingual and free of charge and distribution, Terremoto is a force before the uncertainty and anxiety of seeing how the world becomes something that does not feel safe. Like fellow platforms such as La Tempestad or GasTV in Mexico, Artishock in Chile, Errata and Esfera Pública in Colombia or New City in Brazil, Arts.Black, Carla and Hyperallergic in the USA, Terremoto, as a magazine that feeds of a cultural ecosystem, allows us to share thoughts and experiences of the artistic practice, a common body of information that allows for debates and dialogue, through affinities and discrepancies, as possible ways to weave vital companionship. It is in recognition that complicities are drawn.

Today, the panorama for Terremoto is grim. We are a team of seven people with a fixed salary who work daily to maintain quality content and keep the magazine afloat, not only in its communication but also in its free distribution throughout the Americas. We operate under a logic of mixed financing: advertising sales, subscriptions, grants support, and philanthropy. Since the end of last year, money is not flowing as expected: advertising sales are low even though our prices remain super affordable; our board of patrons is still not strong enough (however, we are eternally grateful to all the people and institutions that believe in the project and have supported us so far). This, coupled with the uncertainty of the new Mexican government and the confusing geopolitics of the region, has us hanging by a thread. It is then necessary to rethink strategies and expand our network of contacts and accomplices to find the model that allows us sustainability.

In spite of, our program of exhibitions of La Postal will continue thanks to the support of Albertine de Galbert and Artesur, and Issue 15 about performance and co-edited with Lorena Tabares will be completed for we were awarded the Fundación Jumex grant to pay our collaborators. However, for us to print is vital because it is the magazine that passes from hand to hand that reinforces the network of the community that supports us, likewise, printed word counterweights the social media’s control and their fragmented communication.

That is why when analyzing possible strategies to adapt in the face of this emergency; the most viable option is to ask for the support of our readers, either by subscribing to get the 3 issues we print annually or supporting a fundraising campaign that will be launched soon to finance the printing of our next issue; something that bothers us since, as Dorothée reflects, this only feeds the idea of crisis as being the usual state of our cultural and artistic practice.

The current art and culture media crisis is not limited to Terremoto, in Mexico, La Tempestad, GasTV, and Paso de Gato are also in a complex situation. The question returns, how are we going to build other possible economies for our sector? It is also important to mention that, within Terremoto, we are in the process of consolidating a foundation, the Asociación Panamericana de Apoyo a las Artes A.C., which is being formed through reflections that seek to rethink the foundation model as a horizontal and communitarian one, to meet the needs and interests of the cultural and artistic communities as a necessary third space that is a counterweight to the public and the private. Recognizing the support you have given us and in the near future, we want this association to be a platform that allows us to give back to strengthen our community.

Let’s open conversations. Here I’ll be and we’ll be.