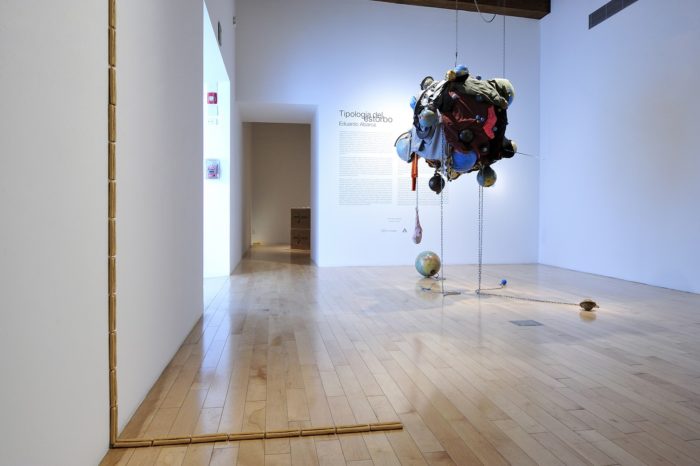 As art historian Daniel Montero has shown in his excellent study on Mexican contemporary art in the 1990s, El cubo de Rubik, Eduardo Abaroa figures among the most important artists that drove that time, as an early member of the group represented at Mexico City’s famed kurimanzutto Gallery that also included Gabriel Orozco, Abraham Cruzvillegas and Gabriel Kuri. That said, he has traced out a career quite different from theirs. The art market’s dogged speculation had stayed clear of Abaroa, as if his artworks couldn’t belong, retain value or were impossible to own completely. His work “displeases” and “scolds,” like children’s scribbles that can’t be taken down from the refrigerator, out of politeness, yet that reveal our worst aspects as tyrannical parents.

In recent years at the institutional level, Abaroa has not enjoyed as many opportunities in Mexico as he has abroad. What’s behind this? Maybe it has to do with the fact Abaroa spends a lot of his time as an instructor at “La Esmeralda”—the national university’s art school—where he has worked for years. Maybe it’s because he lived in Los Angeles for a decade and fell in with other Latino pariah artists such as Mexican Rubén Ortiz Torres, who ruled over the now defunct “neo-Mexican” aesthetic trend in parts of Mexico far from its capital city and subsequent, centralizing dynamics. Or could it be that Abaroa’s work too transparently criticizes art systems, institutions of cultural production and power-legitimizing agencies, especially in the US-Mexico context? Positing the artist as an ambiguous figure at once engaged and cynical, he assembles speculative scenarios that pique the radical imagination, suggesting a way of getting over history’s failures and correcting the abuses of today’s globalized world. 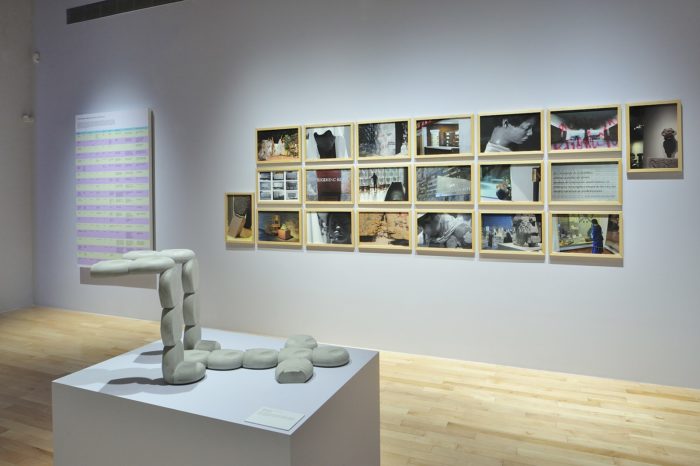 To do as much, the artist uses modest, precarious resources in most of his productions; even the most highly produced pieces seem on the verge of collapsing; they do not fit into the post-minimal aesthetic concept to which some in his generation succumbed (i.e., accepting a certain professionalism that implied watering down ideals as well as a break from the true motivation behind making art). Technical virtuosity in any case seems not to interest Abaroa. His work is based on language, structures, symbols and the ready-made’s intrinsic force. He seems inimical to the notion of style; for him, forms are symptoms that are emphasized through collage or repetition. He does not seek to beautify reality but rather to order it according to typologies that defy the logic aesthetics establishes. The artworks intentionally mix various layers of meaning to confuse audiences and unveil hidden aspects via a certain chaos—as literally happens in 19 preposiciones (1993) a sculptural representation through the objectual that features every preposition in the Spanish language, a work of art whose intentions are violently visual and cryptic.

The work asserts itself as the outcome of a practice of sculpture (escultura in Spanish)—and I use that word deliberately. Possible accusations of “incoherence” in Abaroa’s works—in comparison to many other artists concerned with framing appearances and meaning according to narrow, aesthetic terms in their own—has to do with a different methodology that he uses to arrive at formal coherence. Approaching the artist’s work means attempting to decipher a familiar language through some other, colloquial idiom. It seeks to step away from representational doxas; it rejects style to search for a just representation of things. Was that not one of Realism’s historical proposals? In the age of social media and its power for emphasizing our realities’ both aspirational and darker sides, is there still any such thing as an objective, consensual representation of the real? 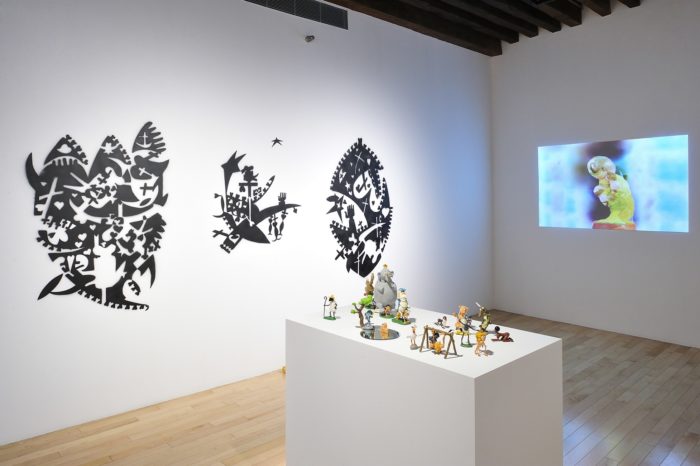 Abaroa is a professional artist who has made a place for distraction and coincidence as the driving forces behind his work. What their resolution leaves incomplete is compensated for at another center of interest, another theory, another idea, another text, another artwork. It is important to understand Abaroa’s work as a totality—as a sort of total art—while accepting its incompleteness, its insistence on working through fragments, incomprehension and stammering. They are fragmented works for an age of failure in broken histories, discontinuous destinations, conflict, pain and lack of memory.

The first part of the show, entitled Tipología del Estorbo (“Disturbance Typology”), curated by Daniel Garza Usabiaga at the Museo Amparo in Puebla, Mexico, gathers several pieces from the late 1990s until the early 2000s. It can be observed these pieces still hold onto some influences surrounding the post-minimalist aesthetic and references to the ready-made, characteristics that helped drive the success of Mexican art in those days. These bodies of work also maliciously reference Neo-Mexicanism’s clownish, baroque register, such as in pieces made in collaboration with Rubén Ortiz Torres. Additionally, videos of plastic figurines reciting phrases from Kant (Crítica del juicio (versión en video), 2002), or just rotating to background music and light-play (Bodhisatva, 2002) are thoroughly unpredictable. A colored micro-sculpture series (Nacimiento al revés (trastornos evolutivos de la sensibilidad), 1999) also form a bestiary comparable to Fischli & Weiss’s at once uncanny and accursed earthenware figurines.

A lexicon of borders moves through all the work like an unceasing question whose appearance has been dissimulated, showing up clearly in artworks like Bisutería, varios kilómetros (versión de pared) (1991). This border is above all cultural and social, introducing the artist’s interest in indigenous issues and symbols of colonial power that are in fact one of the show’s unifying axes. 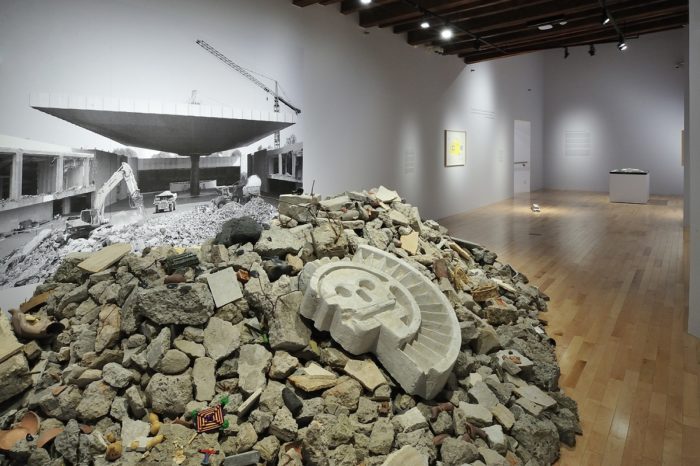 The second part of the show is the mega-installation entitled Destrucción total del Museo de Antropología (2012-to date), assembled on one side with sculpture complemented by drawings and explanatory texts on the piece and its context. In the artwork, Abaroa points to Mexico’s celebrated national anthropological museum’s destruction as the sine qua non condition that reconciling the nation’s Native American identity requires. The main sculpture consists of a one-to-one-scale reproduction of fictitious museum rubble; a broken off part of the so-called Aztec Calendar Stone—the museum’s most famous treasure—can be spotted. Texts reveal anecdotes about indigenous art looting, such as was the case with the sculpture known as the Monolito de Tláloc, which was stolen from the town where it had originated and, legend has it, brought on torrential rainfall the day in 1964 it was moved to the museum. Elsewhere, the installation’s graphic works focus on something more concrete: the museum’s true, piece-by-piece destruction in engineering terms. By means of this architectural fiction, each layer of demolition metaphorically un-makes the historical constructions Mexican society erected to support racist, classist and sexist logics.

This has to do with the fact that Abaroa does not believe in a reconciled Mexican identity like the one many members of his generation retailed abroad, related to an exoticizing fiction having to do with a poetic, pacifying, post-Octavio-Paz, pre-NAFTA nationalism. Or indeed it suggests joint struggle/discussion modalities for and on behalf of the “people,” in all their divergence, conversations that have to be taken up from a number of angles at the same time the struggle continues among that discussion’s participants.

In the next gallery, the assembled pieces reaffirm the artist’s plastic language, now more aimed at history, anthropology and narrative-appropriation than in the first ready-made artworks that referenced the everyday register. Drawings and photography are refreshingly integrated into the works’ documentary aspect as is the case with Inserción arqueológica (2012), a series of photographs taken in the archaeological museum that humorously underline the accidentally comic life of cultural institutions, and that serve as a transition to the last galleries presenting some of the artist’s recent audio-visual projects. 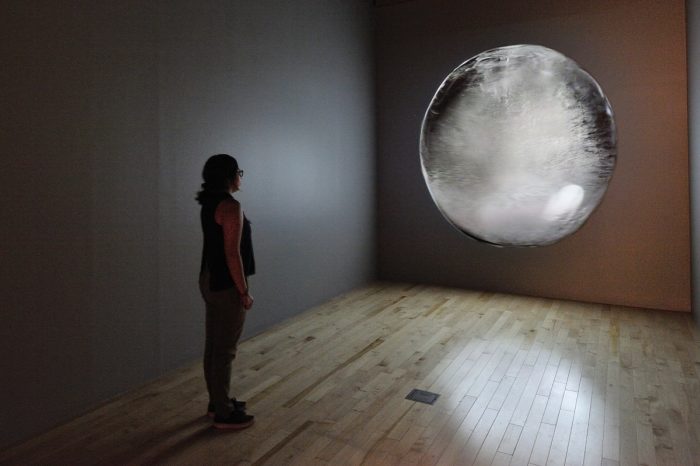 He closes the show not with any culmination of questions and anecdotes, but with artworks affirming visual research on the image in movement in today’s post-TV network, post-YouTube and pro-virtual-reality times, the artist’s latest avenue of inquiry. Thus Abaroa interrupts any chance of the exhibition ending with a moral discussion as the previous galleries might have suggested. La Gran Catástrofe del Oxígeno is a 2015 work produced for an exhibition at the Casa del Lago exhibition space in Mexico City. It speaks of climate change and conspiracy theories on the landscape and introduces a more mystic side to Abaroa’s work. Here the artist does not eschew the minute investigations that built the success of works such as Destrucción total del Museo de Antropología, research that through the fabrication of aesthetic objects expands his search for an effect that borders on the sensational, able to physically resonate within audiences’ perceptions of reality and reaffirm art as an indispensable mediator between us and how we construct our perceptions of the world.

The final gallery therefore resembles a medieval crypt. Several videos project us into La caverna del diablo (2017), a cave in Mexico State where the devil is said to dwell. Here Abaroa makes direct reference to Plato’s Cave, a metaphor that is reinforced by the presence of a video portraying basic mathematical signs superimposed over images of the cave. In fact, the devil lives in a lot of places in Mexico State, not just in the namesake cave, but in all the crimes—particularly gender-related offenses—that leave this state, home to 17 million and the nation’s second most dangerous, far from the city-center’s relative safety and rampaging gentrification. Nevertheless, the cave appears as a possible spiritual refuge, a space that is a special site in indigenous culture, as it was for the 60s- and 70s-era hippie world: a place where peaceful coexistence was possible between worlds and cosmogonies (or at least that’s what we’d like to think), free from disturbance.