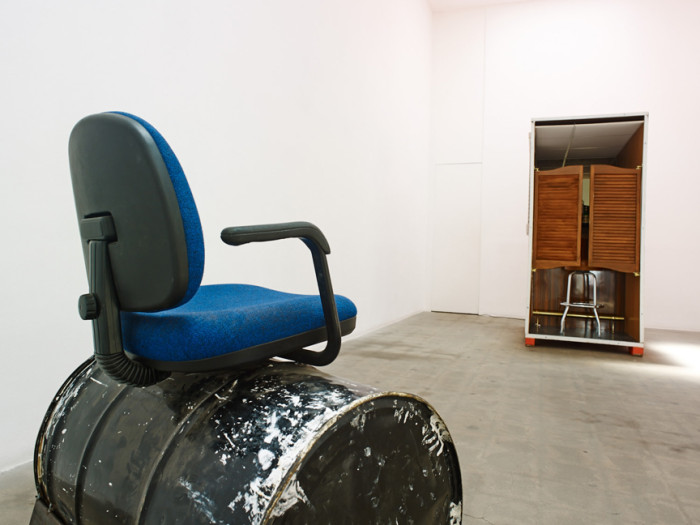 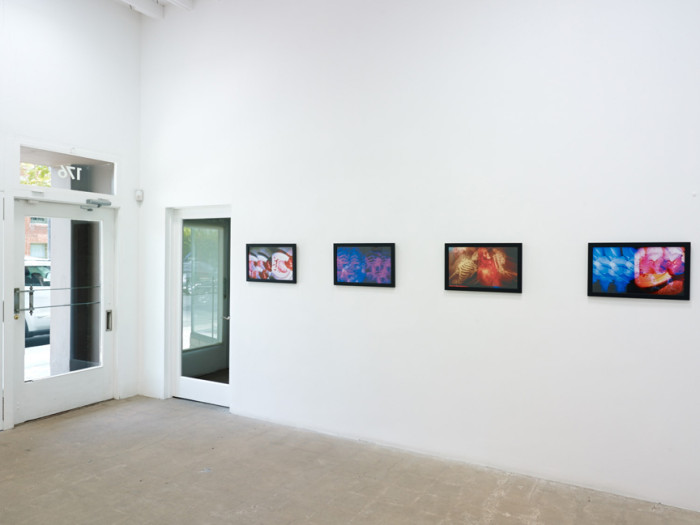 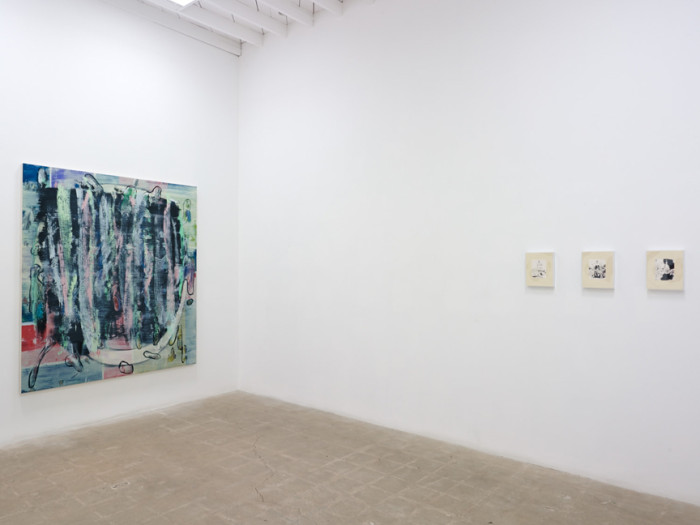 Richard Telles presents a group exhibition whose title refers to David Ohle’s science fictional novel The Motorman (1972). In it, the protagonist Moldenke navigates a world similar to our own, but with stark physical differences.

The exhibition features a sculpture in the form of a compacted, functional bar by Alex Hubbard; lurid photographs by Mathieu Malouf stemming from a nascent film script about two males and their drunken, ill-fated departure from a gay bar; a suite of drawings on hotel stationary by Emily Sundblad—related to Reena Spaulings’ translation of Pierre Klossowski’s book “Living Currency”; a painting by Jon Pestoni; and a rocking chair entitled “Leisure” —fashioned with an office seat and oil drum—by Oscar Tuazon.

These works could be considered “structural moans”, being unfamiliar, yet uncomfortably real.

Alex Hubbard has exhibited widely. His most recent solo exhibitions were held at Standard, Oslo, Norway; and Maccarone Gallery, New York in 2013. He was the subject of a project solo exhibition at the Hammer Museum, Los Angeles in 2012. Group shows include the Whitney Biennial at the Whitney Museum of American Art, New York, and Greater New York, at the Museum of Modern Art in New York, in 2010. Hubbard lives and works in Los Angeles.

Mathieu Malouf has had solo exhibitions at Real Fine Arts, Brooklyn in 2011 and 2013. He also has been featured in group shows at Ludlow 38, New York, Greene Naftali, New York, and Michael Benevento, Los Angeles, in 2013. Malouf lives and works in New York.

Emily Sundblad’s recent solo exhibitions were featured at House of Gaga, Mexico City in 2014, and at Algus Greenspon, New York in 2013; the same year she also took part in a two-person exhibition with Margaret Lee at Off Vendome, Düsseldorf. Sundblad was included in the Whitney Biennial at the Whitney Museum of American Art, New York in 2014. She is the founder and director of Reena Spaulings Fine Art, New York, and a member of the band Tvillingarna and A Night of Country with Richard Maxwell. Sundblad lives and works in New York.

Oscar Tuazon has exhibited widely. His most recent solo exhibitions were held at Dependence Gallery, Brussels, and at the Museum Boijmans Van Beuningen, Rotterdam in 2013. Tuazon’s recent group exhibitions include the Whitney Biennial at the Whitney Museum of American Art, and the Rubell Family Collection in 2012; he also took part in exhibitions at the Museum of Contemporary Art, Chicago, and the 54th Biennial, Venice Italy in 2011. Tuazon lives and works in Los Angeles.