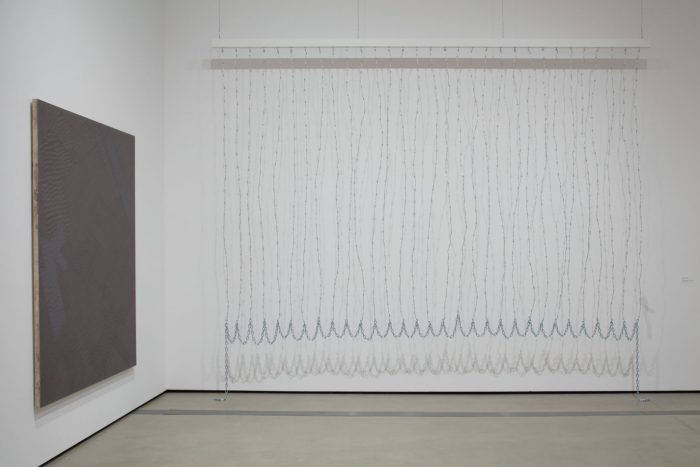 Something predictable happens when white institutions exhibit Black artworks. It doesn’t matter what the artist’s original intentions were or what statements the work speaks on its own. Somehow both artist and work become simplified of their emotions and reality. This expectation of erasure is not surprising, it’s the conscious affect of the Western institution built upon white supremacy, and thus, antiBlackness. The emotions that developed these artworks and artists views are acknowledged, but rarely fully welcomed and included in the gallery spaces. The art industry, in general, would love to and benefits from distancing themselves from rage.

Originally, I had no interest in paying The Broad $20 USD to view the Los Angeles iteration of Soul of a Nation (having kicked off at The Tate Modern in London) for this very reason. For a while, I’ve held an aversion towards the museum and this exhibits arrival had made no change. The summer of 2019 has seen Los Angeles institutes host numerous exhibits—mostly for free—centering Black artists from all generations. Be it the Charles White retrospective at LACMA (or either of its two sibling exhibits: Plumb Line at the California African American Museum and Charles White & His Students at the Charles White Elementary School in McArthur Park); the Ernie Barnes retrospective at CAAM, Art + Practice’s film retrospective Time is Running Out of Time: Experimental Film and Video from the L.A. Rebellion and Today; David Hammons Hauser & Wirth retrospective; or Nina Chanel Abney’s curated group show Punch at Jeffrey Deitch, LA. Even MOCA’s permanent collection exhibit, The Foundation of the Museum, is packed with exceptional work from artists who identify as Black showcasing productive ways to not only depict Blackness and Black people but the oppressions we experience. So there was no part of me that felt like I was missing anything by skipping The Broad’s offering, or to expect that the Black voice of radicalism would actually be given center focus as promoted.

I was not shocked to be receiving reviews from peers speaking of visceral responses to the work and having been left feeling affirmed from experiencing certain artists. Nor was I opposed to the artists exhibited, but specifically didn’t trust the museum to serve them nor the Black people whose labor inspired this artwork through the justice they demand and deserve. When contemporary art spaces focus on art that functions as activism, we, as viewers, aren’t given testimony from the people who are being represented by said work, if even the artists direct voice. Most responses to the exhibit had nothing to do with the activism of Black people, but specifically a Black audience being joyous to have been given access to these glorious artworks. The lack of rage over the inaccessibility of the work lead me to question what relationships my peers had with the mentioned emotion, but also what frame of mind they entered the show with. The roster of exhibited artists exceeds 60 plus and apparently, there were conscious choices to highlight work from women artists and typically overshadowed members from historical collectives (not coincidentally also women artists). I was told to keep an eye out for pieces from David Hammons, Senga Nengudi and Noah Purifoy, and I did. I was curious to see which works from Elizabeth Catlett, Faith Ringgold and Betye Saar were available, as well as Melvin Edwards. Some had plentiful offerings and other singular works shoved into the mix. But still, the feeling of being in the presence of the works was powerfully overwhelming at times. 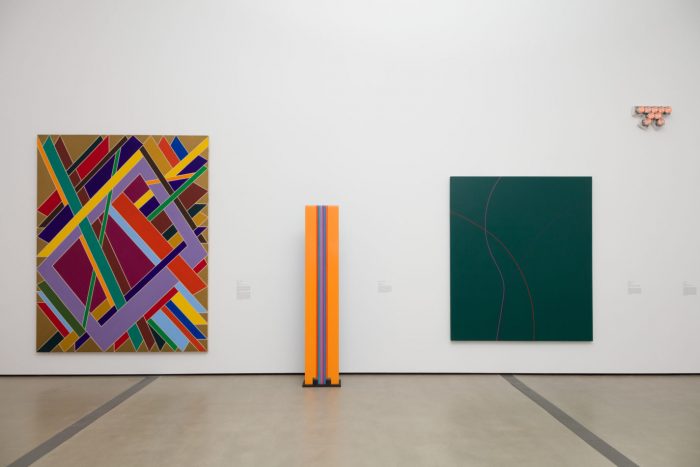 Personally, I find it insulting that we all feel so comfortable referring to “the Civil Rights era” as such. It implies a time, but the implication is a deeper one which situates “time” as something that was and is over. But further referring to “the Civil Rights era” implies that rage is an inappropriate emotion to display. When in reality the fight for Civil Rights is a constant that continues to this very day, fueled by the rage of the oppressed. I was hoping this would be a sentiment expressed within the exhibit but my hopes weren’t seen to. Though there are wall texts throughout that acknowledge “unrest” and “conflict”, the actual dialogue and voices of activism were relegated to the sidelines; to be exact, outside of the exhibit beside the restrooms. Four small screens housing short audio clips from Angela Davis, Stokely Carmichael, Martin Luther King Jr., and Malcom X were literally detached from the exhibit set off at a distance from any wall texts or exhibit signage. It was obvious why the videos were present, but it was not clear on why they were physically separated from the showcase, instead of intertwined throughout the viewing experience. Would it be ridiculous of me to assume it’s because the institution has no interest in actual radical thinking that utilizes rage instead of succumbing to it? Because that’s the rage that connects dots and makes demands, instead of being thankful for commonplace access. This situation laid out clearly how the actuality of activism and radical politics would be dealt with therein. Though there was a vitrine that focused on community murals and a number of editions of the Black Panthers newspaper, showcasing Emory Douglas’ work, it didn’t feel as if the humanity to it all mattered. The aesthetic was prioritized and put foremost which is the most disappointing approach one could take to this work and its creators, especially that of Douglas. This made me wonder if the mentioning of these people were not out of interest and necessity but of unavoidable circumstance or fetish. Never have I seen an institution include the printed text of these newspapers alongside Emory’s prints. Only have I experienced curators narrowing his and the Panthers labor down to aesthetic imagery.

What initial disappointments I let go of in good faith or understanding were not rewarded. The layout of the overall exhibit was unfortunate. Each gallery, awkwardly jam-packed, laid out with poor narrative and little space to navigate viewing these outstanding pieces. Many times it didn’t feel as if the work was overwhelming me, but that I was being overwhelmed with frustration attempting to view certain pieces, moving through the white bodies that expected me to gladly discuss the art with them. If the galleries install wasn’t ridiculously claustrophobic then it was the viewpoint of the curator that was greeting us with limitations or questionable liberties. The Black Portraiture gallery is a prime example. Consisting of nine portraits, the bulk of which were by Barkley Hendricks, the first painting in line is of Faith Ringgold by Alice Neel. The presence of a white persons in a “civil rights” exhibit boasting 60 plus Black artists was jarring and beyond me (upon circling back through the exhibit I realized there were other non-Black artists present by way of their proximity to a Black person, as well as noticing the wall text avoiding this, but the catalogue introduction not). Already feeling short-changed by the relegation of Black voices and radicalism to the sidelines it was insulting to read that Neel’s inclusion was literally on the back of Ringgold and other Black people. Claiming to center Black artists who’ve lacked wider recognition and then including the work of a white artist, even if just a single work, solely on allyship is insulting. There were Black women included in the exhibit who only had a single work present, yet were used as imagery for the promotion of the exhibit. Though Betye Saar had her own gallery and other work in the Assemblage section, most of the female artists were represented in the melee by a single work. For example, Elizabeth Catlett and Senga Nengudi both were utilized prominently in promotional material for Soul of a Nation, yet besides that promoted piece no other work from them was featured. So it does burn to be faced with a portrait by a white artist under the claim that she was a good ally and friend to Black people when these very people’s work has been simplified of dialogue. Even more so when that space could’ve been used to either create breathing space for present work or to display another work from underrepresented Black artists further developing a dialogue further away from the white gaze. 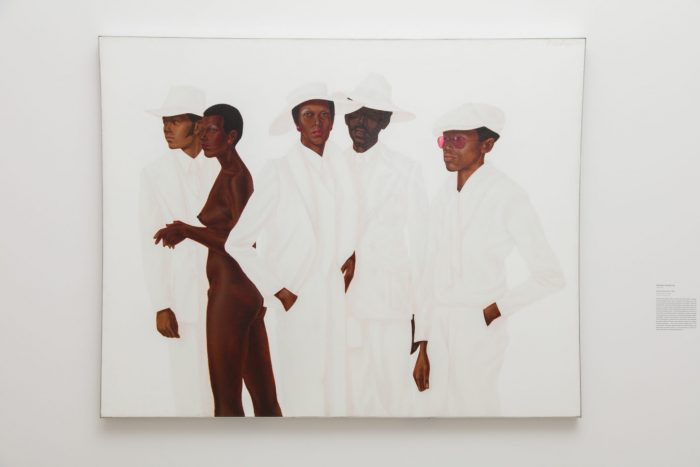 There were works that touched me dearly, such as Beauford Delaney’s portrait of James Baldwin (1971), Betye Saar’s Rainbow Mojo and Eye (both dated 1972), Melvin Edwards works inspired by the continued atrocity of lynching, the documentation of Lorraine O’Gradys protest performance Art is… (1983), which could and should have held its own room alone. The sole work by Elizabeth Catlett, Black Unity (1968), was breathtaking and one of the few to directly discuss Black Love or companionship, which was interesting to take in alongside Bob Thompson’s portrait of LeRoi Jones and his white family before he left them behind for a Black wife and new name. There was a possibility of conversation, but I felt as if that wasn’t the point. The goal was to relate Black art to existing movements, even though many of these movements were based on Blackness. The goal felt focused on fitting within the white gaze instead of highlighting that this work was produced to destroy it.

I recently heard Elizabeth Alexander speak about her husband, painter Ficre Ghebreyesus. During the Q&A she mentioned that museums are “meant to share, not hoard.” I can’t help walk away from Soul of a Nation thinking about that statement with an added approach: museums should also connect dots of truth. Maybe this exhibit isn’t a reflection of institutional hoarding, specifically the hoarding of contemporary Black culture, but maybe a cultural dumping and refusal to connect the past to present. So much work shown at once, removed from the influence of its conception, is bound to feel as such. After the first wave of elation passes and you find yourself engulfed by the objects, you desire something more tangible in a sense. Simply being amongst the art isn’t enough at some points. There’s a reason this work exists and you want all of it, not just the shells. But this is partly what the exhibit exudes: a cultural dumping of artifacts void of proper reflection of a people and our determination. This desired tangibility exists within Black people and it would’ve been glorious to see it fully celebrated amongst the install.

The strength of the art in Soul of a Nation shines through the awkwardness of the curation. That is the testament to this work and its artists. That through the inherent antiBlack bureaucracy of the museum institution and the lack of uninhibited dialogue the emotional statements carry through. It just wasn’t consistently seen too and supported as it should’ve been. It may seem pessimistic to acknowledge the strength of the artworks at hand while not focusing on them, but I feel that it extends the disservice done to the labor of these Black artists and activists to ignore the obvious missteps and insults enacted by this dumping of their life’s work. The work within Soul of a Nation represents a mighty people, but the exhibit itself is awkward and treats the artists in a suffocating manner. Almost as if the politics are secondary and the imagery the foremost important. But this is the typical approach to viewing Black life.