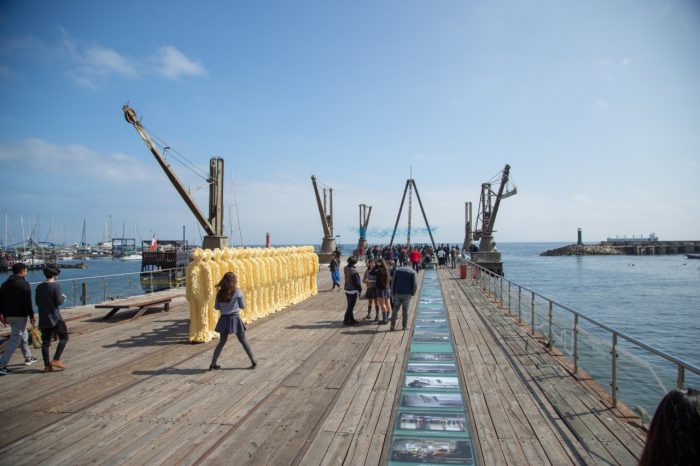 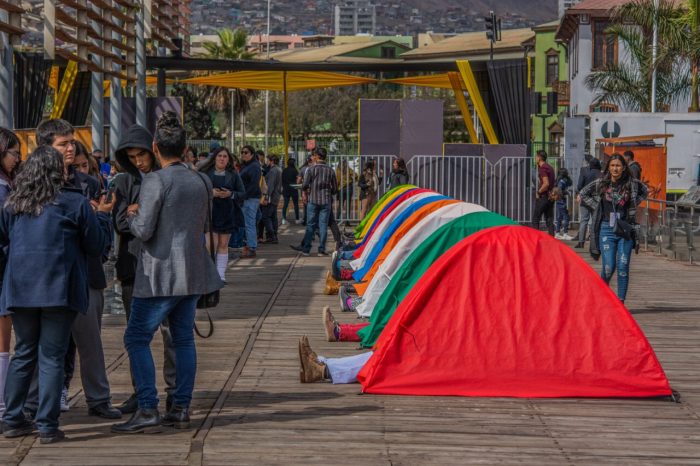 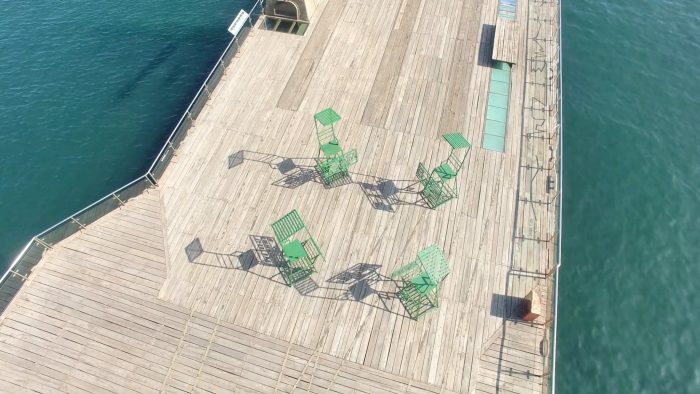 In exhibition until September 5th are the works of artists selected from among 226 proposals in 32 countries from North and South America, Africa, Europe and Asia, all winners in the international call from the SACO8 Contemporary Art Festival. The open-call invited artists from all around the world to prepare projects reflecting upon destiny as well as the Melbourne Clark pier in Antofagasta, a city situated in the driest place on earth, the Atacama desert.

“Despite the unconformity and the roughness of the winning proposals, their unquestionable beauty brings us hope in the face of destiny. There is no beauty without wisdom, and it is there that we find refuge when faced with the threat of apocalypse. We hope these seven works can illuminate with ideas a variety of piers, paths and walkways”, stressed the festival director, Dagmara Wyskiel.

The most awaited exhibition of the festival is composed of seven site specific artworks made exclusively for this pier, a historic and public place which is annually converted into a stage for contemporary art.

Self Monument / Contrail by Yuga Hatta (Japan), a work of sculpture that experiments with the contrail as the base for self-portrait, traces of the human figure, its identity in time and its concern with taking concrete shape in a changing environment.

Endless by Anna Uścińska de Rojas (Poland), an installation with the appearance of mine tailings, blurring one of the sides of the pier to create an environment in which it is possible to be submerged, and that reflects the light, the sky and the water, attempting to capture the essence of the problem: destiny.

The other side of the continent by Patricia Teles (Brazil), logbook of the artist’s journey by land from Rio de Janeiro to her destination: Antofagasta. With translucent vinyl stickers she delivers a “travel story” of 66 hours, from the Atlantic to the Pacific.

Fate (in blue) by Stephanie Williams (Costa Rica), a work inspired by the explorations of the 19th century. An installation made with cyanometers—instruments for measuring the blueness of the sky and the sea—that attempt to reinvent geographies and elucidate the fate of a new route.

Topography of an uncertain future by Guillermo Anselmo Vezzosi (Argentina), a subtle topography floating above the pier, meant to mark the difference between the current sea level and its estimated expansion in the next few thousand years, bringing spectators on a conceptual, apocalyptic journey beneath the sea.

Any Where by Marcos Temoche (Venezuela), a piece that deals with the feeling of uncertainty, alluding to exile and migration. Camping tents with the colors of the Latinoamerican flags arranged in a straight line, inside each tent a dressed mannequin with half of its body outside the tent, facing destiny as if it were a constant trip.

Compound circle by Juan Carlos Guerrerosantos (Mexico), this work is made of referee chairs, facing each other, inviting the spectators to climb up and interact among themselves, while keeping an eye on the prospects and passers-by from above. A circular fiction that allows the contemplation of oneself and the others, observing how numbers change just like we do.

This exhibition is part of the “museum without a museum” circuit of the Contemporary Art Festival. Begun in 2012 as a self-management initiative in the north of Chile, a region lacking in museums and educational institutionality for the visual arts, the festival activates annually exhibition and educational programmes which foster connection with the territory.