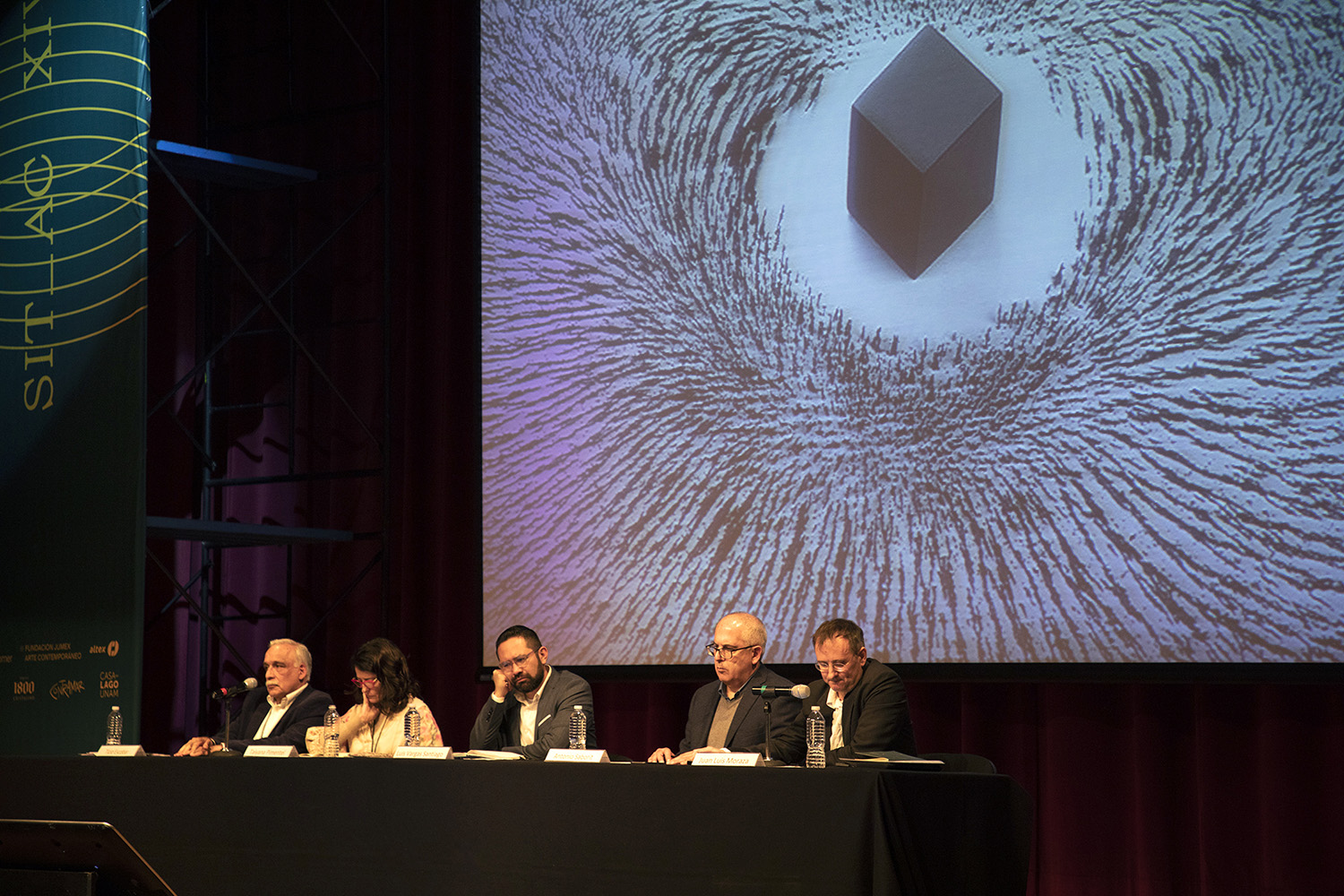 Talk about what? A cultivation of questions derived from the SITAC XIV

The XIV edition of the Simposio Internacional de Teoría sobre Arte Contemporáneo (SITAC) was held from January 17 to 19 of the current year. It was based in the Museo Nacional de Antropología e Historia of Mexico City under the title What Do We Talk About When We Talk About Art. Discourses of Art, Discourses of the World. Despite not having question marks, a question vibrates in that title. In the text in which João Fernandes (director of this edition) presents his statement as convener, as well as in the introduction and conclusions of the event, participants and assistants were invited to keep the question open. To use it as an excuse to come together, think, elaborate, re-think and re-elaborate as much as necessary around the issue of the specificity of art.

The participants that undertake that excuse, in the discussions or in the audience, as observers or readers, we generate a series of scenes and conversations of which surely we have taken air or shed some light on some of the ideas that link each one of us to art. Air that refreshes or ravages. The light that lightens or almost burns.

The second part of the title, although shadowed, seems also powerful to me. The audience, the dynamics and the format of the symposium were an indicator of what are the discourses of art and from which of the discourses of the world they were articulated through the various voices of those involved. I do not speak of voices as subjective opinions, but of tones, volumes, and velocities. The conversations with colleagues or not colleagues around the event are, both, discourses of art and discourses of the world; they are the variables from which the lecturers read the texts that they have prepared and they are the rumors that are heard while nobody is speaking into a microphone.

Here I seek to extend the game convened by the event in its fragile pretense of invoking the most fundamental of art. On the one hand, I enlist a series of questions that I formulated around each one of the parts of the program and that I consider an echo to the initial question, intimately linked to the words and images that the speakers used. These questions are not so much an argument but a kind of consultation document that I can return to when I feel I have answers or that it is convenient to unfold new questions; in fact, many of my questions can be followed by one more: Why? I maintain the program’s schedule to avoid involuntary moments of emphasis.

On the other hand, I suggest cultivating your own questions. To those who attended, to revisit the seen or the written. To those who did not attend, to review the archive, the video available on the YouTube channel of the Patronato de Arte Contemporáneo to see or write around the subject. To all, I suggest circulating your own questions, the others’, to undo them, reformulate them and, above all, to let them resonate.

By the way, to the Patronato de Arte Contemporáneo (PAC), I recognize and greatly appreciate the organization and realization of the event, because, besides involving a lot of work, it is sustained by a cultural justification that remains extremely vague. 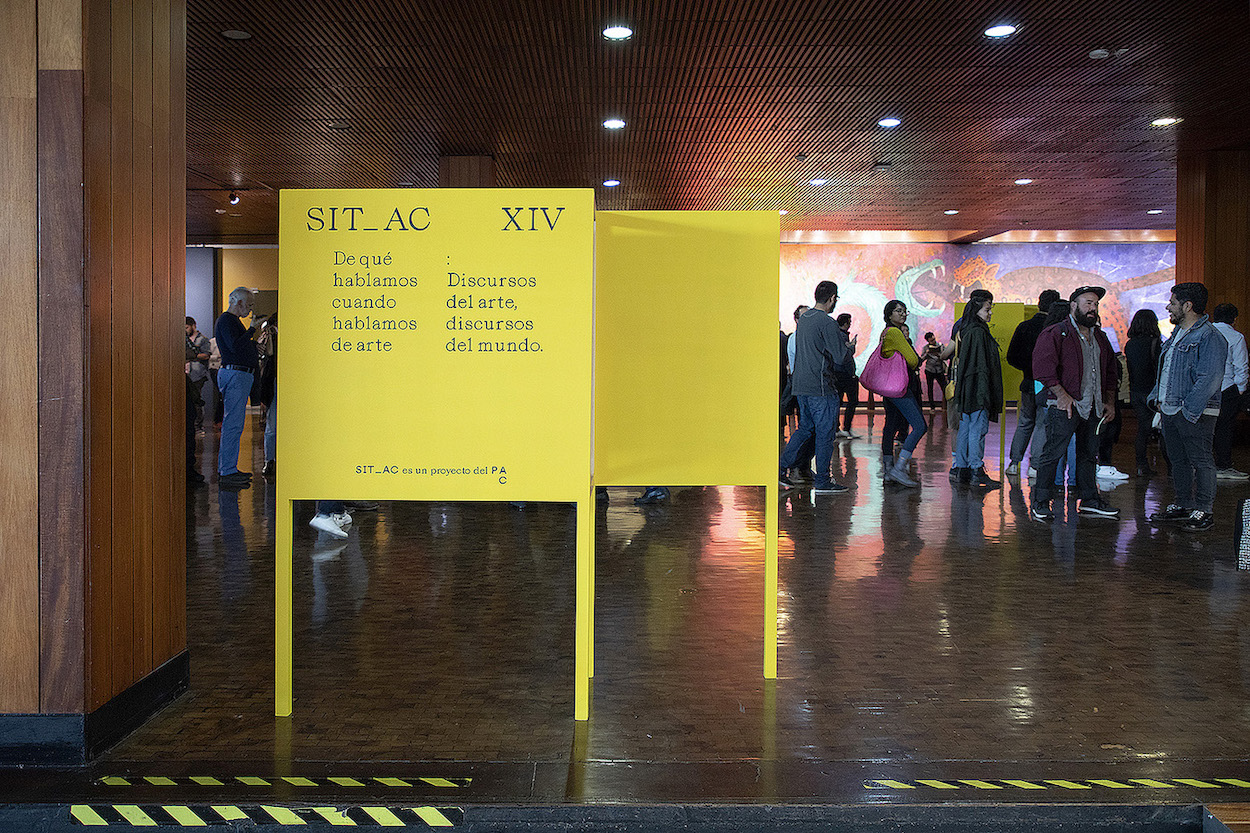 Introduction and conclusions by João Fernandes

What do I think about the title of this edition? How does the venue affect an art event? What would the other attendees be watching in the video of the fly that inaugurated the program [1]? What are we talking about when we talk about neoliberal economics in art? What kind of presence does a work of art have now? Is there a crisis of critical discourses? What critical discourses do I know? What makes them critical? Could my interpretation of art go beyond my education? Can a work of art question an ideological circuit? What contaminates a work of art? Is it possible to be together and do nothing? What is singular and specific is free or radical? Can art be non-intentional? Is art history a fiction or a model of use? Does a collaboration necessarily have to be read as a gesture of resistance?

Disclaimer: Osbourne warned that from his lecture we could not extract fully explanatory concepts.

Can something non-historical exist? What is taught in art schools? Do they teach objects to be ontologically constituted in art schools? Is art a historical-ontological concept? Is art a transdisciplinary concept? Is art a critical concept? Is the art multiplicity? What articulates art? To constitute is to co-produce? How to negotiate between multiplicity and its unity? In what does judging consist? Is it the same to judge that to value? Does contemporaneity imply a state of crisis? What is the post-capitalist imagery of which we participate? Can art claim its social independence? Does art resist being functional? Is art dysfunctional? Does art have its own rules? Is the experience of art, art? Is art experienced in images? What is the relationship between art and philosophy? 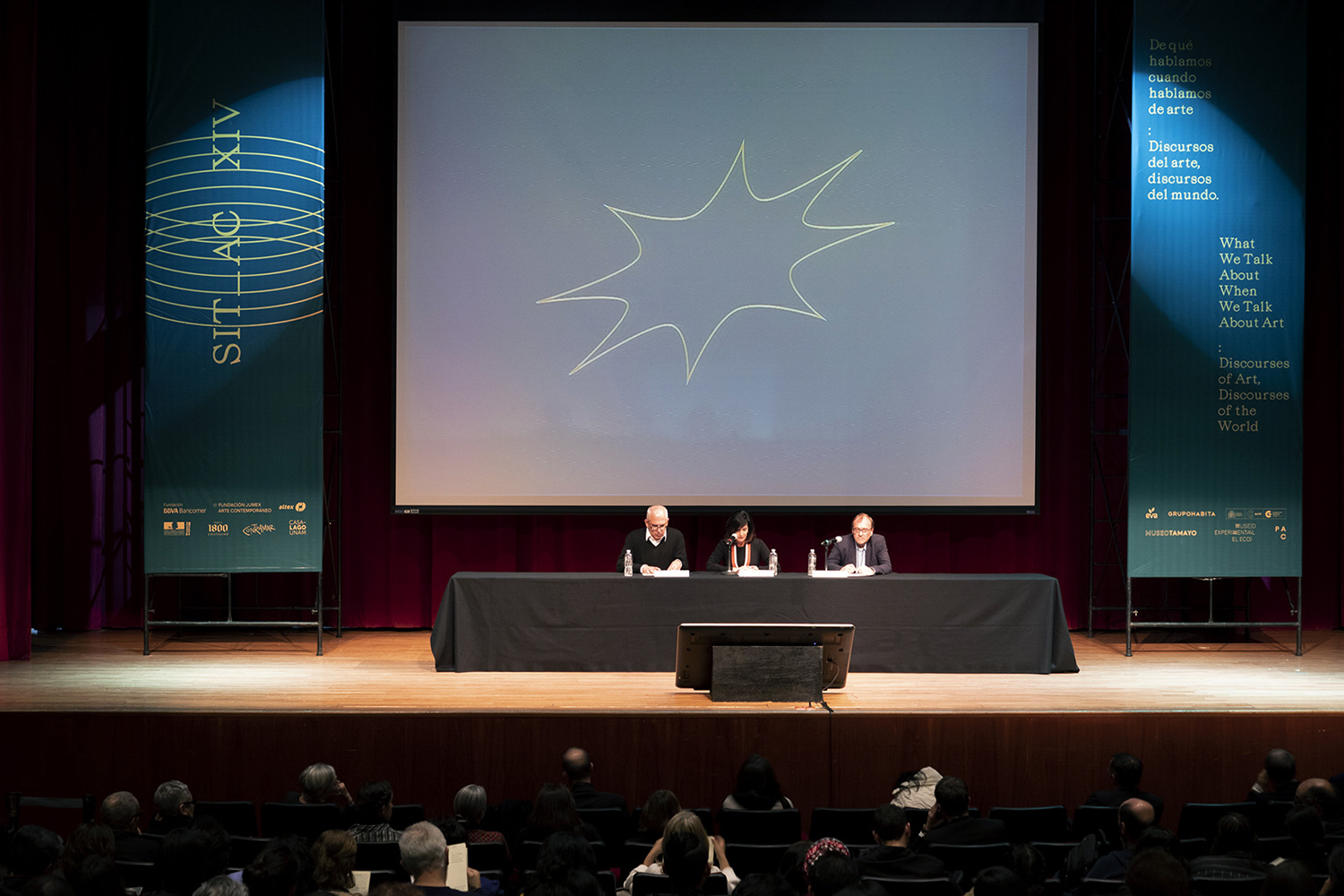 Is a criticism a critique of reality or only of a discourse? What possibilities of art can be broadened? What distinguishes critical theory from philosophy? What distinguishes art criticism from other writings about art? To ask about something specific is to look for an exit? Is the critic a strategist? What objects of my research am I unfolding and which I am advocating? Does the artistic find more fertile ground outside the art world? To thematize an issue is to make it public? Is the art world governed solely by discursive principles? What is gained by announcing that we can no longer speak of art in general? In the search for the specificity of art, do we look for something very big or very small? What does an artist write? To talk about art, is it possible to have a permanent moral disclaimer? Does the artist legitimize the critic or is it the other way around?

How do we update works that were important in the past for this present? How does the aesthetic form of an artwork coexist with its social form? Was Walter Benjamin’s critical work a bomb? Is the inorganic, glamorous? Are you betting on the question about art whether or not it belongs to a circle? How is art placed in front of the gaze? Are the senses circulating freely or are they imprisoned in significations? Does negativity cloud or complicate? Is art a lousy political promoter? Is art the herald of an impossible message? Has art questioned all limits? Is art, then, an intention that overflows? Is art a frontman? Does art expand the real? Is art barely verifiable? What has happened to modern discourse? Has the transition been transformed into tradition? What is reprehensible by the media is more memorable? Culture and social anesthesia are synonymous? Does absolute realism create indiscernible blindness? Is art a system of affectations? Is art a machine of symbolic propositions? Is art a hypothetical? Is there visual abuse? Can an artistic institution fall apart? Can an exhibition model be critical? Can you complain? Can a work of art anesthetize us? What art do I contemplate, what art do I study and what art do I disown? Can a museum be an archive? Can a museum be assumed as a temple? Is the museum a meeting point? Does a museum purify? Is visiting a museum necessary? Is a museum born modern? Can you revoke the title of art to some pieces?

Has compatibility replaced the specificity? Is the language going on vacation? Does art have something in common or do their similarities overlap? Is there any non-ontological specificity? Is there an economy of care? What mundane events seem magical? Subverting is performing? How does a social transformation begin in the first place? Was Kant the engineer behind the master code of modernity? What has no purpose is empty? Can art renounce its specificity? Is a user a political or aesthetic subject? Is it the aesthetic function of art that makes art? Is talking about art a conceptual unity? Whose sound is the wind? Of the branch or of the wind? 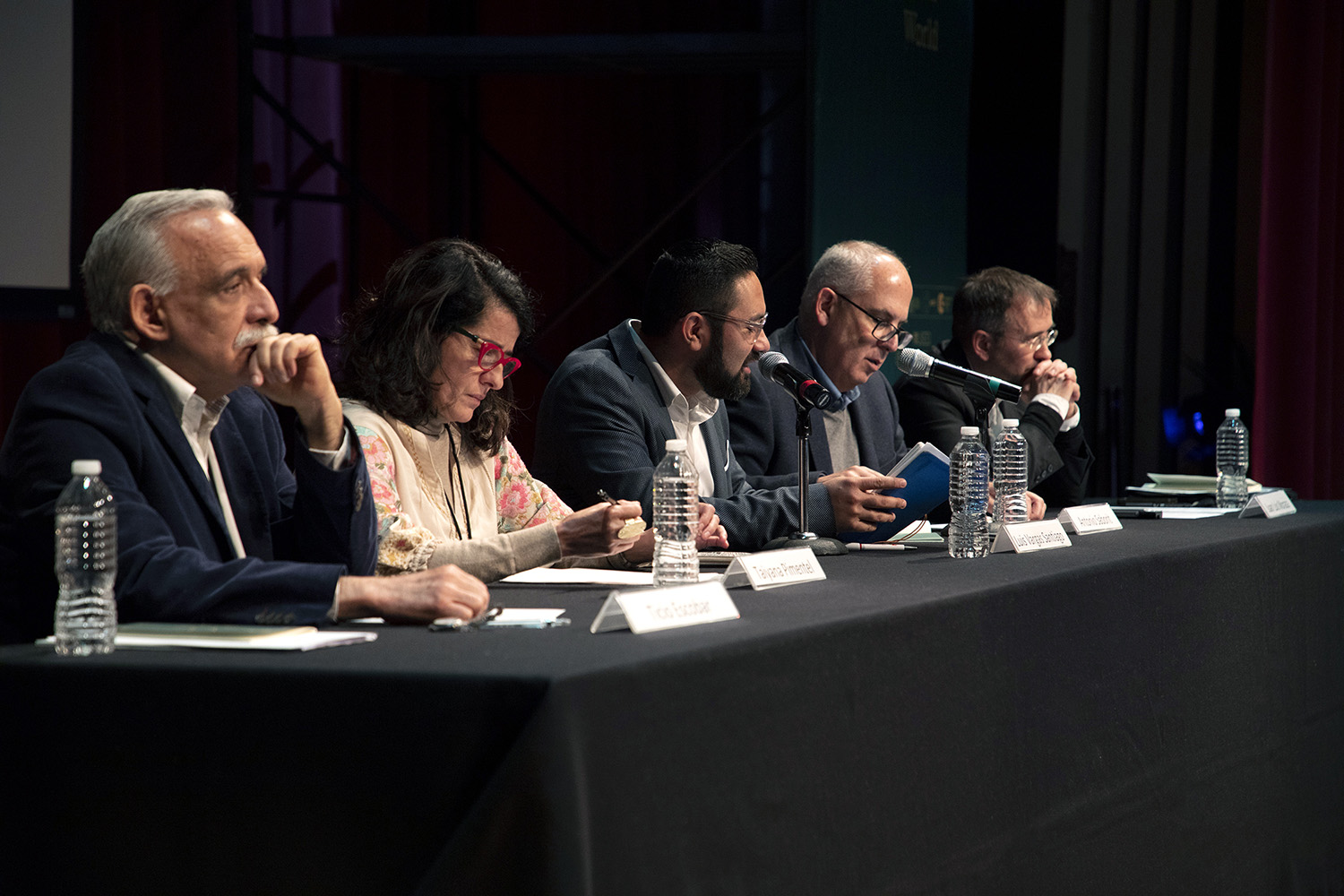 Is all art a form of literature or a form of anthropology? Mariana Botey, Dora García and Tom McCarthy participated. Esteban King moderated

Is art its shadow? Is anthropology also fiction? Who are the agents of an official story? Which art is popular? Is popular art important? Is popular art powerful? What has happened in the relationship between art and crafts? What elements are constitutive of the narrative of the historical vanguards? What schizophrenic turns are there in art? Which schizophrenics do I defend at all costs? Do artists know what art is? Is it worthwhile to find out if something is art or not? Can a work of art meet demands? Does the intellectual have obligations or responsibilities? Does the work of art unite things? Is all art poetry? Is poetry surprising? Does falsehood surprise? Do we do contemporary anthropology or anthropology of the contemporary? Who pursues the evidence? Does politics have its own plasticity? A writer who creates content, creates the world or creates the real?

Do I recognize the difference between my experience with art and that of others? Are there many contemporaneities? Are there other times apart from the time of modernity? To which father figure do we play to confess those who work in art? When have we been careless in our works in art? How much do we work in art? What should I see in the historically relevant pieces? What is for me the real space, where things happen? Nowadays, what does it mean to subvert? Is seeing the world through a screen an illness? Who are the audiences of art? Is the audience a problem of the institutions? Is a topic popular because of its content or its consumption? Is the tradition of bad taste a tradition built from power? Does the relevance of the murals change after the revolution? Can the idea of art and culture still be changed as industries? How does art regulate a body? How is the circulation of the arts of the body being thematized? Does the image of a performance have something to tell me? Can a concept be resignified if I apply it to my body? What does it mean to inhabit the word? Which signs are more accessible to the body?

I look forward to the next SITAC.