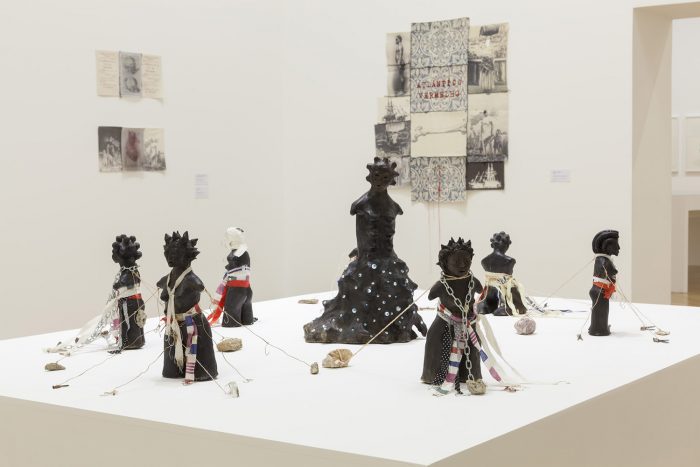 Given the extraordinary and consistent artistic production of Rosana Paulino, now on display at the Pinacoteca del Estado de Sāo Paulo, it seems reasonable to question why it took so long to be able to enjoy a monographic exhibition of the artist in a grand Brazilian institution. The exhibiton, extensive, goes through her work of the nineties—when the artist produced drawings that were rarely exhibited—until her most recent series, made in 2018, based on different techniques of image reproduction. The curatorship of Valéria Piccoli and Pedro Nery refutes chronological schemes in favor of a thematic arrangement, highlighting the diverse unfolding of Paulino’s research. It is a gift for the city, as were other exhibitions held in 2018 [1], a year that the artist described as “the 1922 week of Afro-Brazilian art”, referencing the background of the Brazilian modernist movement and the substantial number of exhibitions dedicated to black artists.

If at the beginning of the 20th century, Brazilian art was exhibited accompanied by what Gayatri Spivak classified as “epistemic violence” [2]—transforming the black population into a spectator of something that was and was not its own existence—gradually, feminisms, black activism, dissident identities, indigenous cultures, sexualities, and singular and plural genders, enter, with denunciating force, the institutional circuits, now crossed by the struggle of subalternized groups that have long questioned the prevalence of hegemonic perspectives in the history of art, challenging visual conventions and the qualification and valorization patterns for artists. For this reason, the production of Rosana Paulino acquires importance, since the artist deals with discussions of gender and race, simultaneously, in a careful artistic endevour that does not distinguish form of content. In the different supports and languages—from engravings and transfers, to drawings, sculptures and installations—, it is possible to observe the perennial relationship of the artist with the processes of classification, mapping and interpretation, even referring to a kind of cartography of black bodies—especially of women—, opposing projects of scientific rationalism when registering complex subjectivities. Her persistence in exhibiting such images seems to reveal to the public the ideological rules under which the production operates, circulation and reception of art, in a complex network of various power interactions operated through visual culture. 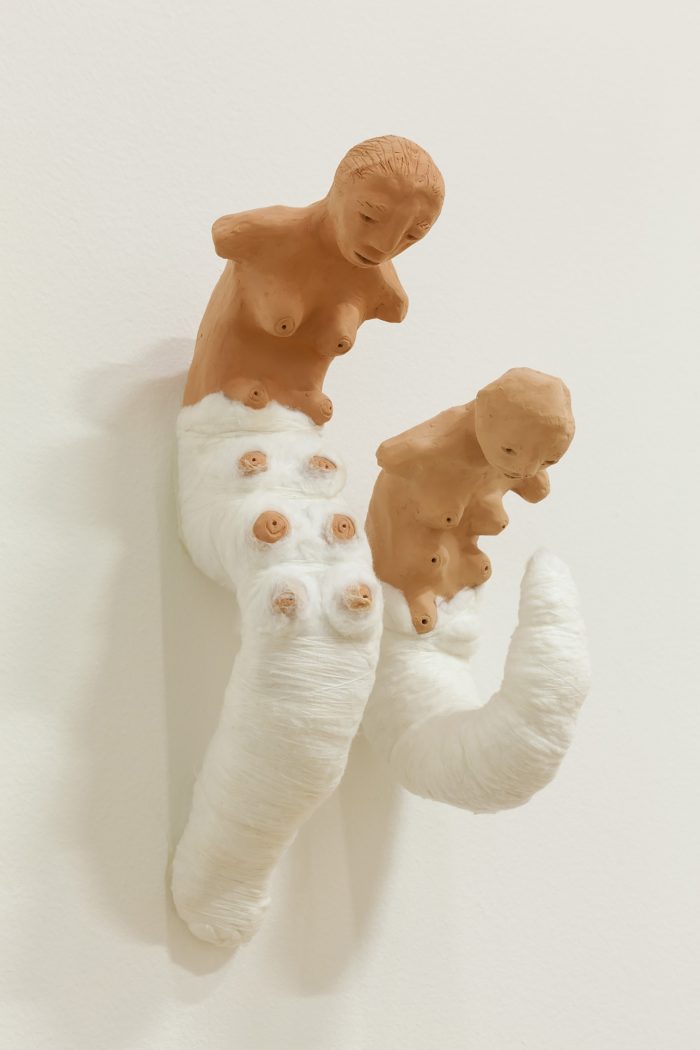 For this reason, it is important to print the genealogy of the artist in the history of art, giving the exhibiton’s first room a strong personal dimension. In the work Parede da memória (1994-2015)—donated to the collection of the Pinacoteca in the context of the exhibition Territórios: Artistas Afrodescendentes no Acervo da Pinacoteca [3]—, there is a large series of patuás [4] reproducing images of Rosana Paulino’s family, as amulets to be carried in the body and at the service of memory, assuming a broad and self-determined notion of individuality. Next to this work is the series Bastidores, which reproduces images of women having parts of their cheeks—throat, mouth and eyes—sutured: a violent image of castration and silencing. While the first inscribes presence, the second reveals processes of physical and psychic destitution.

Such oppositions continue during different moments of the show, although the other two rooms effusively resume the relationship of Paulino’s production with topics linked to biologizing processes. In principle, the relationship with the universe of animal taxonomy feeds her drawing exercises, as is the case with the Estudo de peixe, Estudo de lizard and Estudo de morcego (all from 1993). At the same time, it divides the space with the installation Tecelãs (2003) as if leaning over the animal world would lead to the understanding of the powerful processes of transformation of the silk wrappers into butterflies, a metaphor for the transmutation of an exposed female subjectivity. 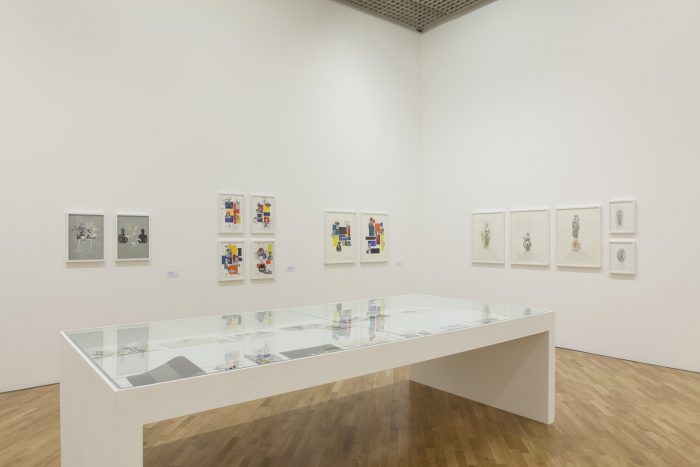 Consecutively, the biological knowledge as an instrument for the subalternization of non-European populations becomes explicit to be able to denaturalize it. In História Natural?, for example, pages of books reproduce panels of Portuguese tiles that serve as a backdrop, first the shaded outline totally depersonalizes a black woman, and then, marking the boundaries between images by a red line, the same feminine figure is presented in its entirety when unveiling the transparency that conceals it and that contains the most classic reference to the slave trade of the image of slave ships used by Thomas Clarkson [5] in his abolitionist campaigns. The page is the same, but the superposition between them, a reference to the interlaced stories, reveals hidden narratives that affirms the need to understand the unnaturalness of those colonial facts.

Not by accident, the series A geometria à brasileira chega ao paraíso tropical (2018) provocatively announces the association between primary colors—which fill basic geometric forms—, and the iconography of scientific racism indicating the possibility of criticizing formalism. The work takes up, in a circumstantial way, the already present theme in the 1990s’ drawings of the artist, reaffirming the inseparability of form and content.

The exhibition Rosana Paulino: a costura da memória closes with an print of the series Assentamento in relation to the adjacent exhibition Trabalho de artista: imagem e autoimagem (1826-1929), suggesting a reflection on the representation and inscription of stories that are eclipsed and misdirected today in Brazilian society. In this way, art is corroborated as an important discursive and iconographic vector, also capable of resisting the prevalence of hegemonic readings. 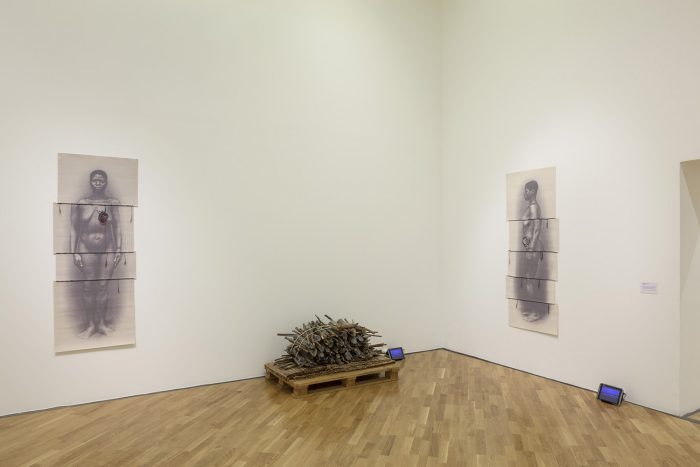 By mapping the constitution of complex subjectivities in relation to a scientific rationalism, the artist rejects, both, the simplistic presumption that we are imprisoned in the past, and the suggestion that history is all we make of it. “The constitution of societies is entangled to dimensions of power; however, the power itself is not so transparent as to make its understanding superfluous. The last seal of power may be its invisibility, but the obstacle to be transposed is the exposure of its roots.” [6]

To the attentive eyes, the criticism presented by the works of the artist points out ways to assume how the construction of the differences resulted in the production of inequalities. Subverting from inside the white cube, Rosana Paulino makes explicit the dimensions of authority connected to it. Is it her determination to deal with issues that are so costly and, at the same time, so neglected by Brazilian art and society the reason for our long wait?

[1] The Museum of Art of São Paulo Assis Chateaubriand (MASP) held a series of exhibitions and public programs titled Afro-Atlantic Histories, with a homonymous exhibition, as well as monographic exhibitions of María Auxiliadora, Aleijadinho, Emanoel Araújo, Melvin Edwards, Rubén Valentín, Sonia Gomes, Lucia Laguna, Pedro Figari. The SESC Ribeirão Preto gave place to Pretatitud – Emergencia, Insurgencia, Afirmación and the occupation program of Itaú Cultural was dedicated to the trajectory of Ilê Aiyê, among others. There is also a greater participation of black artists in collective exhibitions and, although in smaller numbers, also as curators.

[3] The exhibition, with the curatorship of Tadeu Chiarelli, took place between December 2015 and June 2016 at the Pinacoteca del Estado de São Paulo.

[4] In the Candomblé culture, the patuá is a consecrated object that contains within itself the axé, the magical force of the Orixá, of the saint or light guide, to whom the object is consecrated.

[5] Thomas Clarkson (1760-1846) was an English abolitionist who led the campaign against the slave trade in England in the early nineteenth century.