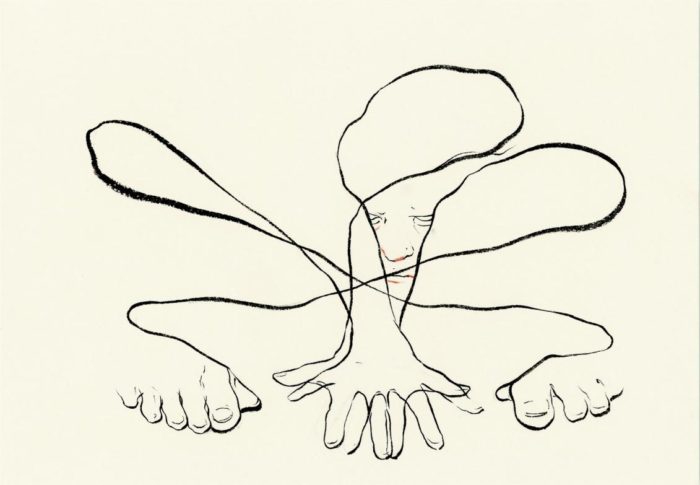 As a modern society, we’re moving little by little yet ever-more rapidly toward an unavoidable crisis stemming from a semio-capitalist system that alienates us all. According to Franco Bifo Berardi [1], semio-capitalism is an articulation of overproduction through psycho-cognitive stimuli that saturate all the media through which we relate to one another and our environment. These stimuli mediate and limit contact between bodies as well as interaction among people. The anxiety that stimulus-saturation brings on is a constant sensation all of us in the modern city and its infrastructures share. In that context, the exhibition entitled Escultura impermanente (Impermanent Sculpture), by Rita Ponce de León and staged at Proyecto AMIL in Lima, presents itself as a space for exploring the de-territorialization of the body in light of the need for a renewal and consensus that is unattached to semio-capitalism.

The show’s title alludes to the body’s continuous transformation and the incessant adaptability to which it is subject in an environment of immediacy and under pressure from modern structures. It also frames the show’s central elements: body and space, understanding sculpture as the evocation of a line that, through movement, can create a three-dimensional relationship between artworks and audiences that activates body-related reflections, both physical and virtual. 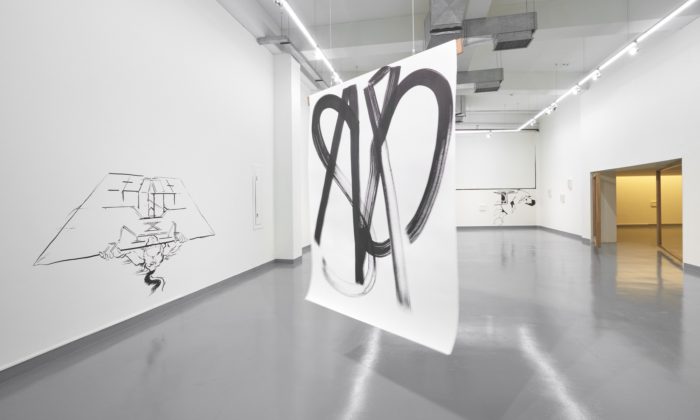 At the entry to the exhibition space, the work on paper entitled SÍ-NO, el camino a casa está lleno de caminos a casa (2017) hangs from the ceiling as it receives visitors. This subtle welcome, an abstraction of words for “yes” and “no,” announces that the space spectators will soon enter was designed to remind us that home transcends materiality and is part of life’s journey. The simple piece manages to define the exhibition’s pace vis-à-vis the pause that underlies deciding yes or no. Here anxiety becomes a personal, introspective breather.

Conformed by murals, drawings, a sculpture and an installation, the exhibition is divided into two galleries; light is a prominent museographic element throughout the show. In the first space, artworks are presented beneath white fluorescent lighting that plunges us into the chill of semio-capitalism’s hyper-technological postmodernity as the sole force for experiencing the world. Tensions between environment and body begin to be identified.

This space’s murals portray bodies constrained by the rigidities of modern forms, where angles and straight lines subdue, oppress and distort the body. Small, abstract drawings—of flawless form and composition—illustrate the body’s natural resistance to those forces. In these first drawings, Ponce de León transmits the start of a corporeal process of transcendence through liberation and relaxation. As in Japanese Butoh dance [2] (a recurring reference in the artist’s work found throughout the exhibition), bodies in her drawings are subject to continual transformation and limit-exploration, as well as what these encompass, when it comes to preconceived ideas that organize the body in relation to its surroundings. The need for close contact inside and out of bodily limits begins to create a way forward. 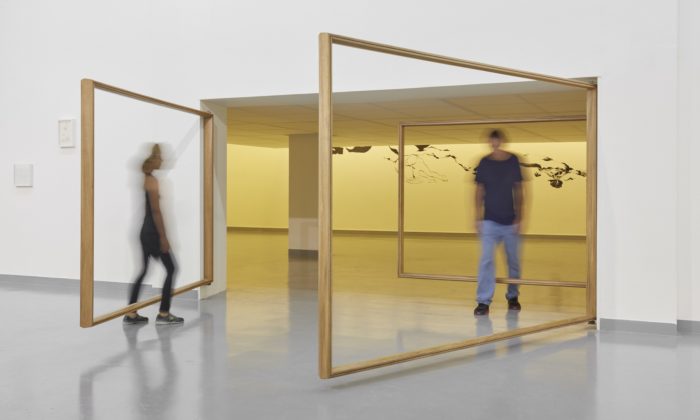 That notion migrates from paper to space beginning with the work entitled ¿Cómo desaparecer una puerta? (2017), a sculpture formed by three moveable wooden frames that suggest the movements of opening and shutting a door. The sculpture impinges on the entryway between the two galleries and obliges visitors to explore body movements in relation to the sculpture as a means of breaking with the rigidity of its rectangular form and the limits it imposes. The piece places human posture, splayed across the forms that oppress it, into crisis, in order to (re)-take control of an interrupted trajectory.

The second gallery’s warm, tenuous light greets visitors and encloses them within a space whose height has been reduced. The curatorial text points out the gallery “represents darkness and all those forms of ‘living’ we don’t know”; movements are interrupted and other, indeterminate ways of understanding the space emerge. This idea, though also found in the drawings’ amorphous character and in relation to Butoh dance technique, however, does not completely manage, in museographic terms, to transgress in such a way as to achieve a reflexive echo of the white cube’s rigid limits and characteristics as presented in the first gallery. If our intimate spaces’ darkness confronts us with ourselves, could this have been an excellent opportunity to explore the possibilities of constructing a much more visceral space alongside the artworks? The poiesis behind Ponce de León’s work possesses a capacity for recuperating the human friction from which the contemporary art realm has slowly retreated, to become just another image in semio-capitalism’s cognitive stew. 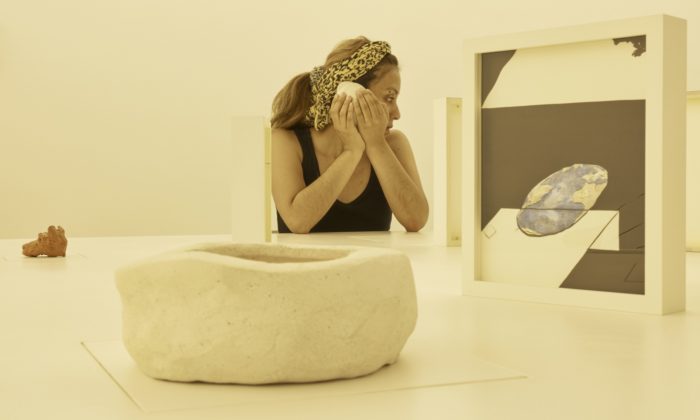 The second gallery’s murals portray the figure of the body as it makes and undoes itself; the artist asks us to confront the difficulty that lies behind attempts to break with the system’s paradigms. The body detaches from itself and falls into madness. One of the murals along the longest wall portrays the construction of a horizon from an inverted perspective. Next to this mural stands the installation entitled Reúne vida, mientras cuelgues de este tierra (2017). It invites visitors to sit at a table and interact, through touch, with small clay and ceramic pieces on a surface that keeps the pieces warm. They are complemented by drawings that seek to portray the incommensurate. These last establish a sensorial relationship that—in dialogue with the upside-down horizon mural—close the show by discovering a transition in the symbolism of the horizon as well as the micro- and macro-cosmos, that restores a feeling of closeness within and without corporeal limits and conceptions.

It’s difficult to not consider the exhibition’s empathic capacity linked with feminist thought. In the Latin American context, remains more crucial than ever to project the body as a first political territory from which to fight the imposition and oppression of conservative and moral ideologies and discourses, which have oust the individual capacity to take decisions on the same. To recognize the work of Ponce de León from a feminist gaze enables us to recognize our own body in order to emancipate it from the patriarchal norms and limits that semio-capitalism’s modern and technological outlook imposes to justify the oppression, exploitation and devaluation of the human being.

In Escultura impermanente, Rita Ponce de León forces us to abandon our bodies to then—based on abstraction and the aesthetic—re-think and question routes for negotiating and defining the relationship between the functional and the phenomenological, the physical, the technological and the sentient body.

Diego del Valle Ríos is an independent curator that lives and works in Mexico City. He is currently Managing Editor for Terremoto.

[1] Franco ‘Bifo’ Berardi. (2011). After the Future. Edinburgh, Oakland, Baltimore: AK Press.
[2] Dance techniques created by Kazuo Ohno and Tatsumi Hijikata in the postwar context of Japan in the 1950s.