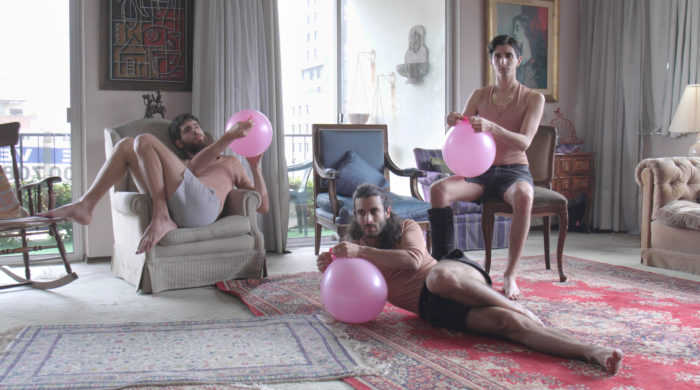 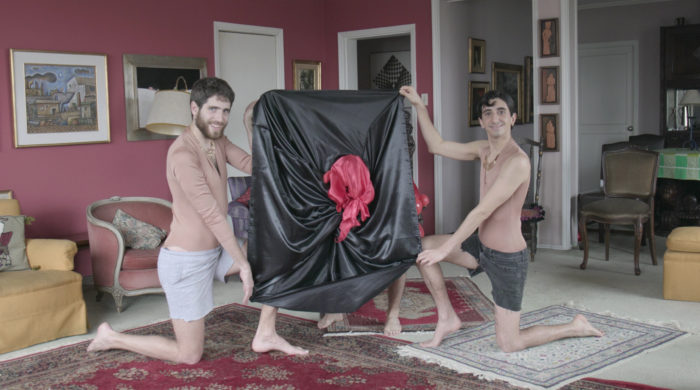 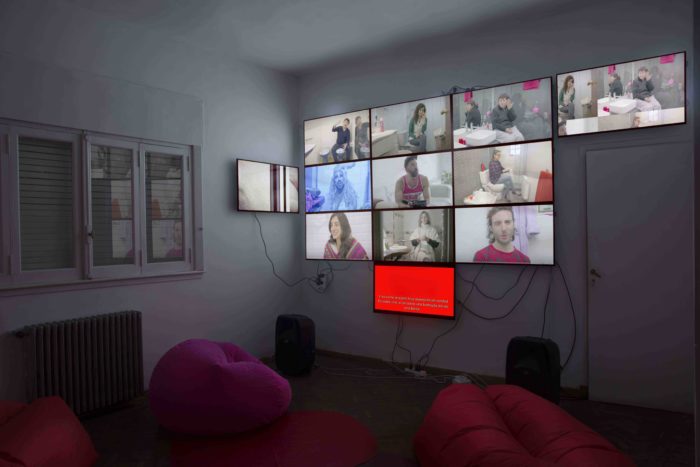 2014 was the year ass came back into style. On August 18 and 19, respectively, the music videos for Taylor Swift’s “Shake It Off” and Nicki Minaj’s “Anaconda” were released. In Swift’s, she participates in a number of dance montages, each stereotypically representing a particular genre of dance. Bar exercising ballerinas, a “Swan Lake”-style montage, and modern dance are contrasted with break dancing sequences and a line up of video vixens, wearing denim short shorts and oversized gold hoops (the last of which we also see in Minaj’s video, albeit better versions). Even though Swift dances awkwardly among all of the groups, she slugs a ghetto blaster with the break dancers, and even more egregiously, stares directly into the crotch of a black woman twerking above her.

“Anaconda” features Minaj, and her ass, front and center, with dance moves and outfits that shamelessly show off her posterior, surrounded by beautiful women doing and wearing the same. The track heavily samples from Sir Mix-a-Lot’s “Baby Got Back” from 1992, which lauds women with “healthy butts,” and scorns emaciated rock video girls and the exercise-crazed. Minaj’s appropriation of the lyrics come from a place of female empowerment: The ass is not to be conquered by men, but is a feature women should embrace about themselves, to be used as a mechanism for self-preservation. Women are in control, accumulating capital because of their assets.

The contrasting styles of these two videos and their lyrics launched a flurry of tweets and think pieces, mostly centered around the ass. Was Taylor’s video racist? (Yes.) Was Nicki’s too salacious? (No.) Reporters commenting on Swift’s video often saw no problem with her “innocently” ogling at a black woman’s gesticulating thighs, while condemnations of Minaj’s power track took on the same tone as clichéd anecdotes about women leeching off sugar daddies or stripping their way through med school. (If a culture reinforces the notion that women are valuable insomuch as their physical appearance, what options do we feel are available to us?)

Minaj’s reclamation of the ass, her ass, is a boldfaced affront at this very logic. Sure, a large ass may be desirable because it indicates sexual prowess, but its cultural history is specific to bodies that are Other. Minaj flips her potential objectification into a position of power. In our macho-capitalist, racially inscribed culture, why should Minaj be censured for asserting herself as the sole proprietor of her body?

Like many trends that originate from within black American culture, a fat ass was initially condemned by whites, only to be appropriated with full force. Flash forward from the iconic opening lines of “Baby Got Back”—“Oh my god, Becky, look at her butt. It is so BIG.”—to when Amy Schumer appeared on Conan, touting a photo of herself wearing an ass suit in her dressing room, referencing Minaj’s video, and declaring 2015 the year of the ass. Although she first mocks her fetishtic pseudo-appearance, this then gives her permission to celebrate her curves.

By now, we’ve fully embraced the ass. Squats, in all of their varieties (sumo squat, squat jack, squat jump, split squat, plié squat, squat with chest press, squat with mini band, and so on), are the exercise of choice; clothing lines, from denim to fitness apparel, are releasing body-con- touring bottoms; and the name Kardashian is essentially synonymous with ass, even though the veracity of their appearances are regularly contested in tabloids or subject to episodes of Keeping up with the Kardashians (the most well-known being from Season 6, in which Kim has her butt X-rayed by her plastic surgeon to prove that it’s “real.”). Our ass obsessed culture, especially of late, is the entry point into Básica TV’s newest video, Hemorroids: The Movie (2018), the preeminent work in their solo exhibition Rectum at UV Estudios in Buenos Aires. In their longest, most prodigious work to-date—totaling over forty minutes, spanning fifteen screens, and accompanied by an installation—the Uruguayan-born art collective first questions our cultural preoccupation with butts, but more than this, asks why this is as far as we go. Katie Couric famously aired her colonoscopy on national television in 2000, but the colon was never sexy. Asses are undeniably so, and as such, are inherently linked to capital, and ultimately power. Why else would we see an onslaught of products and trends come to prominence during the same period as the rise of the ass? Juice cleanses, Activia, colonics, anal bleaching, tapeworm diets, and coffee enemas are just a few of the recent fads that oddly allude to inner workings of a sexualized exterior, but never go further. Basica goes deeper, though, making hemorr- hoids the focal point of their film. This asks us, as viewers, to come face-to-face (literally) with the highly taboo topic, urging us to question our discomfort with it. (A quick search for “hemorrhoids” on YouTube, the content sharing platform known for its tutorials and how-to videos for nearly everything, yields strikingly few results, underscoring how unmentionable hemorrhoids are among us.)

Hemorrhoids combines aesthetic tropes from documentaries, art films, reality television, commercials, and music videos, seamlessly, yet overwhelmingly, weaving a multi-layered, multi-channeled narrative about inhibition, privacy, corporeality, and sexuality. The majority of the footage comprises interviews with subjects—most of which are shot from within their private bathrooms—including, the artist and feminist activist, Pau Delgado; the President of Proctologist Society of Argentina; an alternative medicine doctor who, as a survivor of colon cancer, specializes in treating hemorrhoids; a drag queen; a physician of internal medicine who works at a public hospital in Montevideo; Google Home, a “smart speaker and home assistant”; the artist Guillermo Iuso, whose piece Mi hemorroides cumple 7 años (2003) was censored from the MALBA (later in the film, we meet the collector, Gustavo Bruzzone, who owns the piece); a friend of the group who has personally suffered from hemorrhoids; and another friend with depressive psychosis, the treatment for which causes her to have hemorrhoids.

Heavily edited segments from these interviews introduce the film. Absurd, overly dramatic, out-of-context phrases, reminiscent of the opening sequences from an episode of Bad Girls Club, blare across nine screens, sometimes with interviewees words overpowering others. At no point can we tell what the film is even about; the word “hemorrhoid” is never mentioned. Such stylistic musings drawn from pop culture are Basica’s forte. Cutting to the title sequence of the film, the interior of a bathroom (their bathroom, as I have come to learn living at UV Estudios!) is highly glamorized. A toilet wand rotates in slow motion, like a car on display in a dealership. Spurting water from the bidet is transformed into an elegant fountain. Flushing, from the perspective of a GoPro mounted on the interior of the toilet, dramatizes the extraordinarily banal act. Hemorrhoids: The Movie unabashedly announces itself across the screen, with the emphatic impact of a tent-pole movie, like Alien or Transformers.

Through the unfolding series of interviews, we discover that hemorrhoids are incredibly common. Fifty to sixty percent of people havebeen affected by them—the inexact number of which only further substantiates their stigma. Meanwhile, heart attacks are half ascommon, yet are easily discussed among friends or at dinner parties. Even in the private space of a doctor’s office, patients have a hard time expressing what is causing them pain. The psychian of internal medicine, for instance, describes how patients in the ER avoid using words like anus or hemorrhoid when relaying their symptoms to her.

Since its founding in 2015, Básica TV’s video work and performances have addressed queer culture, alongside the aesthetics of commercial content online and constructed or scripted stories of reality television and social media. Rectum encompasses all such dimensions of their work, and queer politics is only facet of Hemorrhoids’s complex narrative. The cultural taboo of hemorrhoids enables introspec- tion into ideas of personal space and privacy in an era of obsessive (inter)mediation. Just as we enter into private bathrooms for the interviews, we find ourselves in Gustavo Bruzzone’s home, where he shows the group Guillermo Iuso’s infamous piece, as well as the entirety of his extensive art collection. As they are guided through the space, Basica comes to observes a considerable amount of his works resemble an anus (cue music in the style of the TLC’s My Strange Addiction). A mini feature within Hemorrhoids, entitled Hombres Heterosexuales, invites the viewer into the bachelor pads of single, heterosexual men. Like an episode of Room Raiders gone terribly wrong, the subjects show us relatively unadorned interiors, porn, action figure collections, guitars, and drum sets—what Básica described to me as “interior decorating for straight guys.” (“We always wanted to see that.”)

None of these impositions are meant to subjugate the participants to mockery. Instead, Básica attempts to break down cultural barriers across a wide spectrum of people, often putting themselves in the place of their subjects so that they are just as vulnerable. We catch glimpses of them looking at art in the collector’s house, reflected in mirrors of a local gym, and participating in a therapeutic music session with the alternative medicine doctor. The ass itself is a universalizing force in the film: Everyone has one—male, female, trans, straight, queer, black, or white.

This thinking relates to Paul B. Preciado’s Terror Anal y Manifestoes Recientes (la isla de la luna, 2013), in which he rewrites the history of sexuality through a queer perspective, with the anus at its center. The anus, Preciado argues, is a post-identity organ. It is not related to any one gender, nor any kind of person. Penetration is an act of empowerment from which one can derive sexual pleasure, again, irrespective of gender. While Freud and Lacan’s obsession with the anus renders a developing child powerless, subject to their external forces, Preciado writes that the genderlessness of the anus is what makes it a site of agency. This opens up a hole that was previously closed, relegated to its physiological function (not unlike the vagina or uterus, while the penis is clearly sexualized). For as legitimizing as gestures like Minaj’s are, and should be commended rather than condemned, such tactics cannot go far enough. People of all kinds will continue to be objectified or ridiculed for their appearances in a lose-lose cycle of oppression. Only by going further can we begin to imagine alternatives notwithstanding gender, race, and sexuality.

In the closing sequence of Hemorrhoids, the three members of Básica are adorned in “bodycon” toilet paper mini dresses à la Hervé Léger. Each dances to pulsing electronic music in the doorway of a bathroom stall—a mise-en-scène not unlike Chicago’s “Cell Block Tango”—with wisps of toilet paper blowing like strands of flowing hair and fabric. What if the hemorrhoid is just another accessory? What if it’s this year’s hottest trend?

The Bridges Make the Place