To Paint From What is Given: Beatriz Gonzalez's Obsession with Images

The present and painful thing about González’s work is that we would like her to show us the past, when in fact she reveals a present that has not completely taken charge of the social trauma that we are going through as Colombians.

Today more than ever, we live in a visually oversaturated society. Images circulate vacantly through multiple portable electronic devices, the social networks that activate them, and the mass media that feeds them. In a world confined by the pandemic, this information overload seems to detract from the ability and perhaps even the interest to pause and reflect on what forms our views and the relationships we build through it. In contrast to the context of hyperconsumption, the exhibition Beatriz González: una retrospectiva manages to discover the artist’s obsession with images and her incredible capacity to translate them according to their potency as cultural indicators. In the flow of its circulation, it manages to reduce the speed with which images are trivialized in order to reconfigure our perception and discourage us from the effects of their permanent consumption.

Curated by Mari Carmen Ramírez and Tobias Ostrander at the Museo de Arte Miguel Urrutia-MAMU in Bogotá, the exhibition was quite comforting to me. Not only because producing an exhibition project of this magnitude during COVID times is undoubtedly a challenge for any institution—something that as visitors we sometimes forget—but also because it implies a gesture of will and resistance to the “new normality” on the part of the public, although this is ultimately imperative: schedule the appointment and arrive at the indicated time (spontaneity is thrown out the window), go through the exhibition with a precise time limit (often under the pressure of a reminder on the limited time available to finish seeing the exhibition, something that annoyed me several times) and, of course, to comply with the bio-security protocols: stand in line respecting social distancing, go through the register and check your temperature, apply the gel on your hands, confirm your data, and, for these days in Bogotá, add the rainy weather. Although I am tormented by the feeling that we live in a world that is even more regulated than before, it was worthwhile to visit the two rooms dedicated to the Colombian artist’s trajectory where critical sense and dissidence are present in the works gathered in the exhibition. Although the museum has a very well designed virtual tour, resources that institutions have resorted to on account of the pandemic, in my opinion, nothing beats a physical visit.

The exhibition is arranged chronologically and offers the possibility of beholding works—even for a specialized public—that one rarely has the opportunity to see together. From her years as a student in the sixties, where we find an interesting selection of her early pieces, to what has been produced in recent years, covering six decades of her career. Although not the first retrospective made to the Bumanguese artist, it’s the most comprehensive that has been made until now and, furthermore, we have the opportunity to see it in the country.[1] 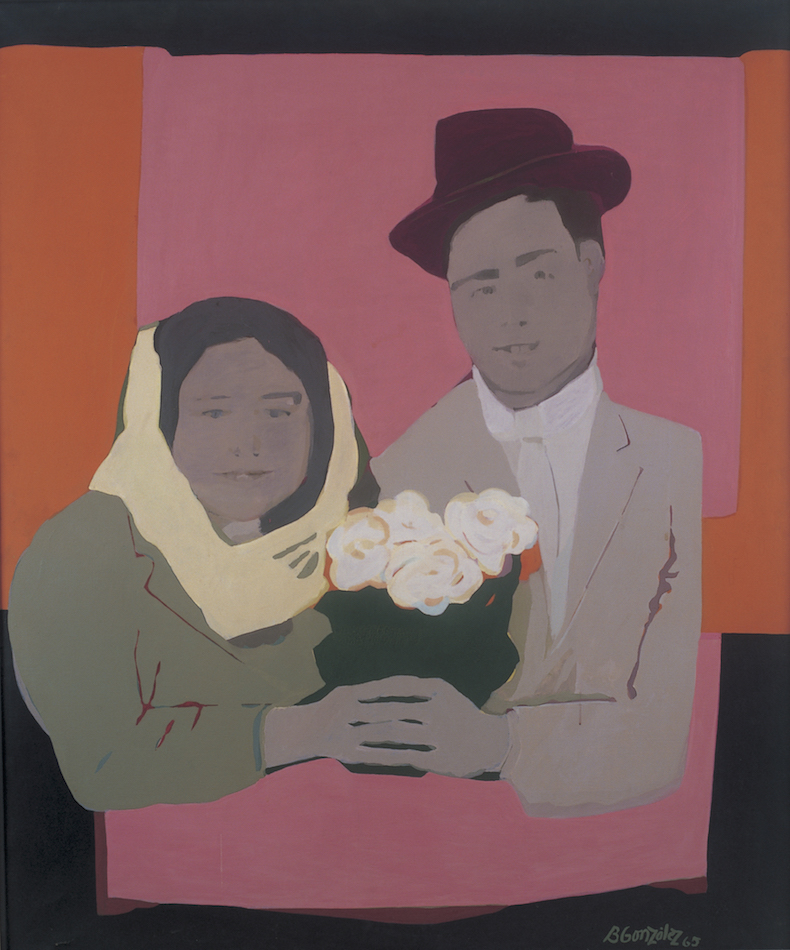 In the exhibition we find all the work that would be expected from a retrospective exhibition of the Master. From Vermeeriana I (1964), an exercise of an abstract nature where she emulates an image of Vermeer, a moment in which she discovers that copying is liberating and where her query for images appears; to Los suicidas del Sisga I (1965) one of her most referenced works that indicate the point of inflection in the tour of the exhibition where the visual collecting and the archive are developed, a starting point from which the value of images as a record of culture or history reigns.

Continuing with the seventies, where she creates her famous furniture pieces, we find a reflection on the social construction of taste. By taking references from popular culture and inserting them in objects, she establishes relationships of meaning between an image and the support which could take different forms, be it a bed, a table, a nightstand, a drum, a plate, a metal tray, a dresser, among many others. Her production in the eighties reveals the moment when her gaze becomes more critical and through which she produces works with biting humor that translates in the photographs of powerful figures within Colombian politics. Stripping them of the grandiloquence that reproduces them in the media, her painting reveals the vanity they hide and the implicit artificiality of their representation. On the other hand, in the work done from the nineties onwards—a particularly bloody decade in Colombian history—we recognize a darker palette that relegates comedy.

In the maelstrom of images of violence that have desensitized Colombian society in the last three decades, González has been able to choose some of them and give them back to us in the form of shameful icons that point out the extent to which we have degraded ourselves as a society.

The important thing about the revision of González’s trajectory, beyond the well-deserved recognition of her work and placing it into context, is that it brings us back to the questions and strategies that run through it, which are still valid. Her research on the social construction of taste and the consumption of cultural goods leads us to reflect on the way we participate in the production of information through social networks and the implications these practices have on the construction of relationships and imaginaries. Likewise, the exercise of undressing the images of power invites us to become aware of the discursive dispute that they liberate, not only from those instances but from our everyday life and the way we participate in the artificiality of representation. The hyper-circulation of images and the way we shape perceptions about reality are key issues for the understanding of contemporary society. Even more so at a time when the struggle against post-truth demands critical thinking capable of revealing the fictionality of many of the contents we see and which operate to serve petty interests. Perhaps that is one of the most powerful characteristics of González’s work, the invitation to look at reality with suspicion in order to see what underlies the information we consume and how it determines the stories we build as a country. 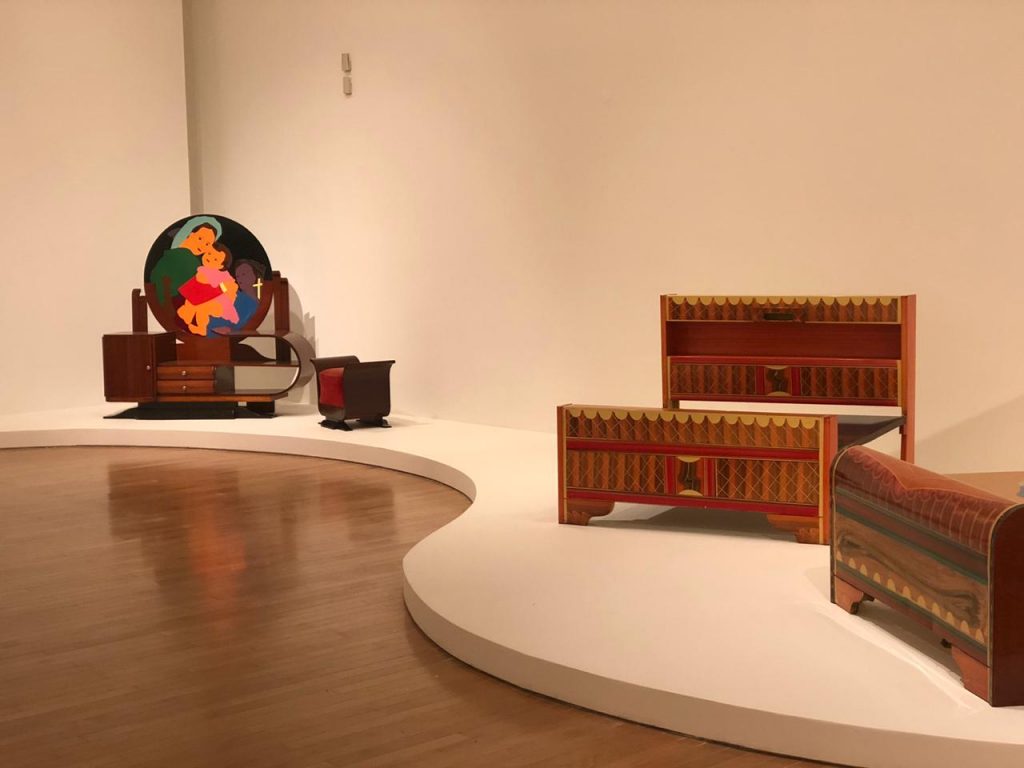 For an artist with her interests, it has been impossible to ignore the images that result from the theater that is Colombia’s political history, in which, many times horror has erased any trace of comedy. Looking at reality with suspicion leads her to confront us with the most regrettable events in Colombian history. The socio-cultural background from which she creates has always been present in her work, implying that part of her production has focused on violence. Autorretrato desnuda llorando (1997) was a piece that called my attention. In it, the artist portrays herself with her hands in her face, showing us a fragile and exposed body. This work reveals a trait that runs through her work, empathy with the pain that has been left in the wake of the conflict in Colombia. A violence that has been repeated over the years, hence the overwhelming nature of several of the works that can be seen in the exhibition, which reminds us of the magnitude and systematic nature of horror. The present and painful thing about González’s work is that we would like her to show us the past, when in fact she reveals a present that has not completely taken charge of the social trauma that we are going through as Colombians.

Walking through the exhibition, we understand the way González reacts to the images that reality produces by inertia. Appropriating them was a profoundly contemporary gesture for an artist who never gave up painting. With her keen intuition to navigate what is given, I accentuate her circumstances—her printed surface or the imaginary of which they give an account—to take a position that reaffirms her place of enunciation as a painter who produces her work from a country limited by the fiction of underdevelopment. Her obsession with images is even more evident in the room that displays her archive and establishes a dialogue with the spaces dedicated to the retrospective.

Located in El Parqueadero–MAMU’s artistic project lab, the curatorship of the archive was carried out by Natalia Gutiérrez Montes and José Ruíz Díaz. This complementary exhibition adds interest to the visit as it confirms her facet as a collector of images. Its archival drive is very clear. Having the possibility to see her documentary collection composed of personal photographs, press clippings, plans with assembly instructions, event letters, exhibition catalogs, postcards, and a variety of documentation, adds layers to the interesting character that constitutes González, who in addition to being a painter was also an art historian, critic, and curator. It also points out the importance that the archive has taken within contemporary art, placing it as an autonomous field of research.

Beatriz González: una retrospectiva allows us to appreciate the way in which the artist’s work matured through the years, fulfilling the purpose of a show of this nature, allowing us, as spectators, to put into perspective the depth and breadth of her artistic production. And above all, to understand the way in which she transformed images into a visual and real archive, which reveals to us the ambivalence of them, its fictionality through the reproduction of the reproduction or in her words, to paint from what is given.