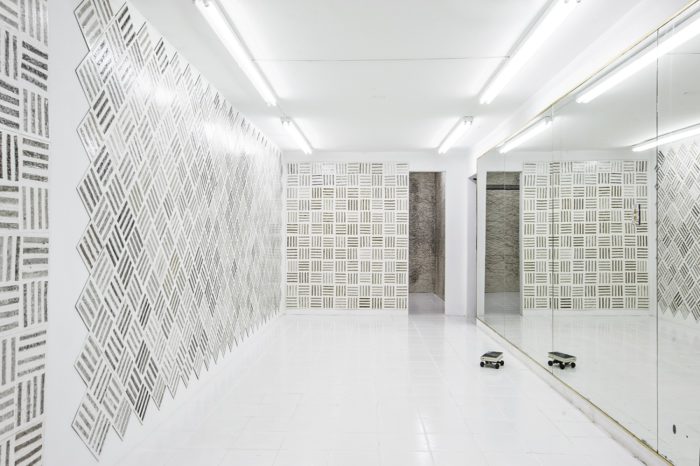 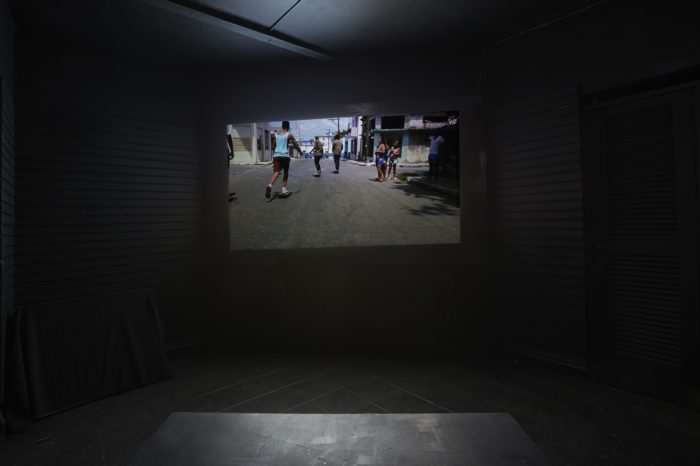 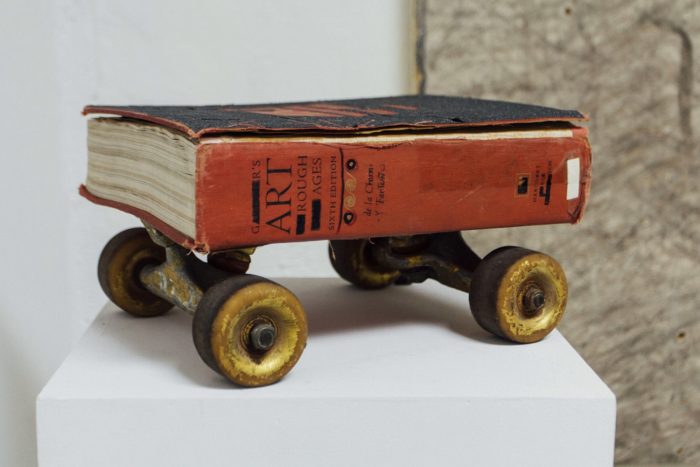 One Thousand Four Hundred and Seventy-one Rides continues Chemi Rosado-Seijo’s long-term engagement with skateboarding. For the exhibition Rosado-Seijo creates an immersive installation of urban geometric mappings evoking minimalist canons. Each panel is composed by affixing adhesive to the wheels of his skateboard, tracing his rides, and mounting the strips of tape containing smudges and detritus from the streets onto the panels in geometric arrangements. The exhibition, accompanied by a selection of earlier works from the ongoing skateboarding series History on Wheels, includes a video filmed in Cuba during his participation in the 2015 Havana Biennial. The work depicts Rosado-Seijo navigating the streets of Havana’s barrios for seven days from the lowered perspective of the skateboard, the sound of the wheels roaring against the cement.

Chemi began skateboarding as a teen and upon entering art school he quickly drew parallels between what he was learning in art history courses and his skateboarding practice, an investigation that developed into the oeuvre, which continues today. Earlier works included a series of skate ramps painted white, their surface becoming flat paintings exposing the scratches made through its use, evoking the techniques of the Abstract Expressionism. Rosado-Seijo went on to create a series of sculptures from books relating to art theory and history, then mounting used skateboard wheels to the back covers echoing a theoretical and visual analogy between art, knowledge and skateboarding’s history.

In 2005, for a project with Art in General, Rosado-Seijo mapped Manhattan from the perspective of a skateboarder, re-drawing the city in terms of its skating sites. In 2006, together with Roberto ‘Boly’ Cortes, he inaugurated La Perla’s Bowl, a permanent sculpture built with residents of San Juan’s La Perla community that functions as both a skateboarding ramp and a pool, the early models of which are on view for the first time at Embajada. Most recently, in the summer of 2016, Rosado-Seijo installed the largest skate-ramp he has built to date at the Museum of Contemporary Art and Design in Costa Rica (MADC) for the exhibition Number 03-16 (A.FANAL) as part of the History on Wheels series. At a total of 16 meters long, 8.50 wide and 3 meters at its highest point, it was encouraged to be utilized by the public and later installed in a nearby park to further expand the sculpture’s use by the community. With a focus on community engagement, Chemi Rosado-Seijo’s interdisciplinary projects link architecture to the surrounding urban landscape, bridging work with social action, and reunite art with its history.