These exhibitions provide different answers on how to reconvert spaces as territories made of tensions. Discovering the social sense of a space enables us to ask ourselves how to access it, and which are the material conditions for these spaces to exist. 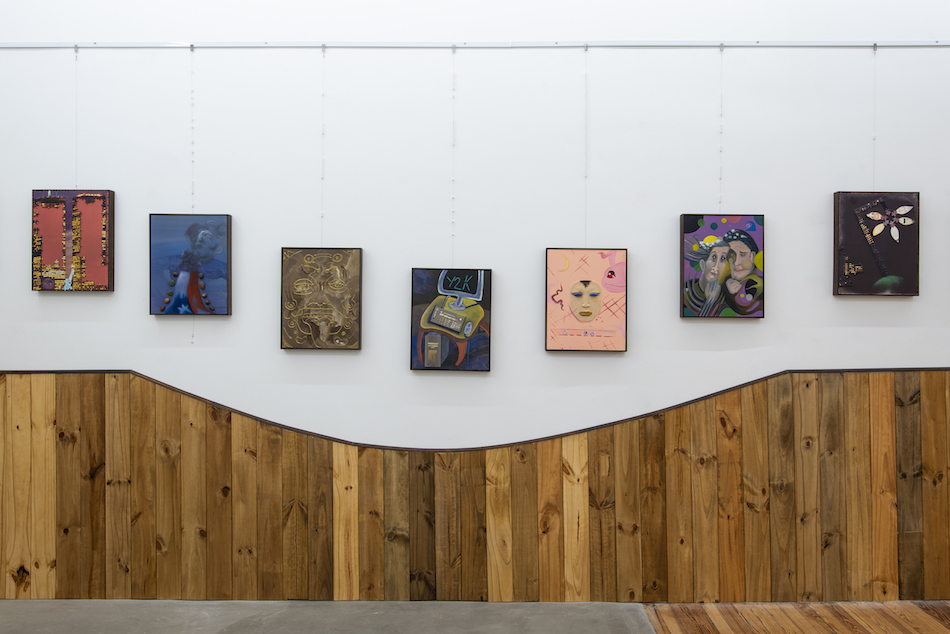 If crisis is an opportunity, no doubt this year encapsulated the need to imagine new configurations. Among the many and diverse proposals that came to light, on the last week of November Panorama took place, an initiative of the Cámara Argentina de Galerías de Arte and arteBA. The attempt was to account for what was happening in the artistic field throughout the country, grouping together the projects that had been selected for the fair in March, which could not happen. A program was then set up with the 52 galleries represented by Meridiano and the spaces gathered by regional associations such as Junta (Red Bonaerense), FARO (Asociación Civil de Galerías de Arte de Córdoba) and GIRO (Circuito de Galerías de Arte Rosario). In total, more than 130 spaces and 600 artists–an abundance in this federal, insane tour! And although its main objective was to promote sales, above all, Panorama was the inaugural gesture of a desire to achieve a horizontal dialogue between different organizers, spaces and artists from all over the country. There was much needed transversality; the tension between Buenos Aires and other provinces relaxed. The country did not feel so unreachable. Thanks to the territorial references of the different regions, a network was built to cancel out isolations, which existed in all shapes and sizes long before COVID. Unlike the artistic mega events of the past, of white fairs with homogenizing stands next to each other, the impossibility of flocking to the big capitals laid the ground for a situated event. It let each space be seen from its own place, its own context, uniting them all thanks to the digital realm that goes beyond time and place.

To add adrenaline and confusion to the event, in the middle of gallery week, something very unexpected happened. Diego died: Argentina’s most important popular idol. A few blocks from the wake in Plaza de Mayo, you could find La casa de la cultura, Toto Dirty’s exhibition at Isla Flotante gallery. But in times of uncertainty and freelance work, who wants a cultural center? That name, perhaps obsolete, invites you to what was and is, for many young artists, a refuge in a beach town. A place in which you can develop an imaginary that’s not necessarily tied to the winds of the season, to the tourist life that, come January, takes with it everything it comes across. In the design of the exhibition, the wooden planks mark a horizon, the same one that separates the dunes from the sky and feet, the feet in the sand. Fractures, stones, puzzles, gold and cans of tuna, among other elements, create collage-paintings that are hung up by tassels, encouraging the reconversion of boredom, exploring the relationships between memories and images that the artist constellates, in order to recognize a common imaginary. A very quarantiney gesture of bringing what is not present. 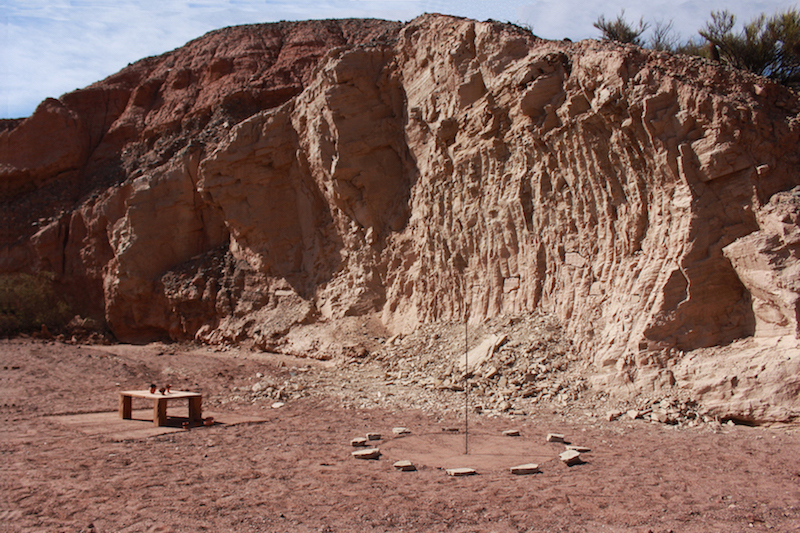 One could say that Ángeles Rodríguez and Florencia Sadir make an opposite move. Instead of taking the beach to the gallery, they mounted their works in between the mountains. A link on Google Maps shows a red dot far from the city. Geografías de la Imaginación is located near San Carlos, Salta. Through the video posted on YouTube, you can see a clock made on the floor with the shadow of a fine and tall iron as a needle and the numbers carved in stones. We can also see a table with red earthenware pots and pipes that match the environment captured on video. And net bags containing dry beans on the rocky walls. From afar, the great stones make all that is present blur, become invisible. The video’s sound is a frequency rarely heard in the city, a sound frequency that is imposed by stones, wind and water, leaving no room for words. 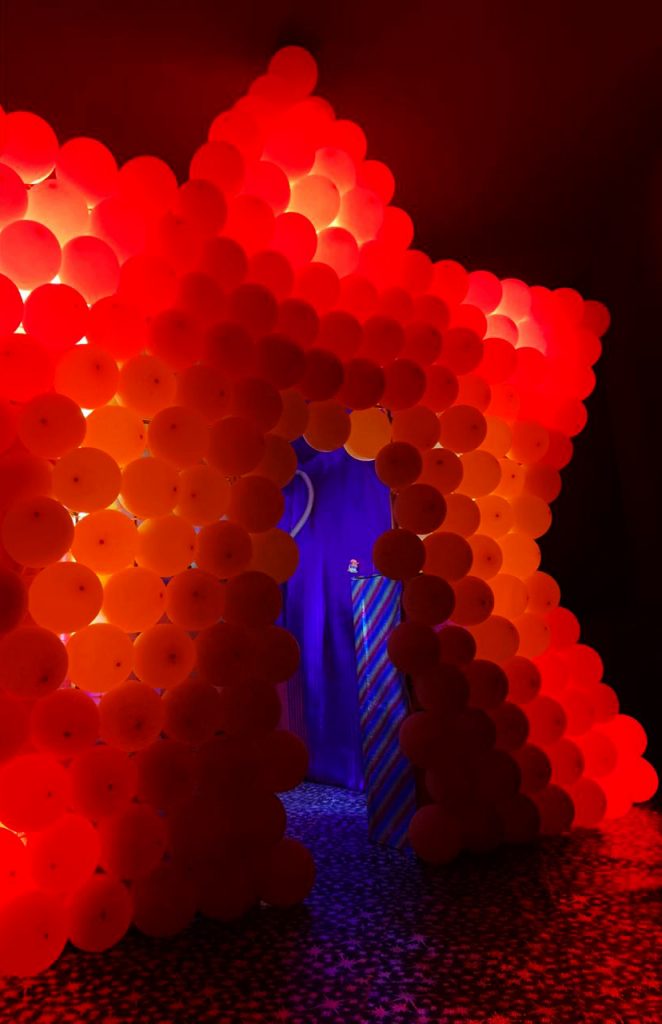 In an obviously opposite space in the Montserrat neighborhood, on the local landmark Avenida de Mayo, stands the Barolo Palace. A historical neo-Romantic and Gothic Revival building that is lost in a neighborhood of offices and historical centers. In one of its last floors you can find CPU, a space managed by the curators Boris MHL, Mano Leyrado and Paola Mattos that stands out for materializing theoretical discussions on curatorial practices. This is where artist Mia Superstar builds a spectacular world of balloons, cold porcelain and red light called Superinflation.[1] Sculptures and drawings in which Mia is always the protagonist; as in “The myth of the star”, an island-work executed with a tenderness that is already her trademark. The exhibition proposes, without challenging words, a rebellion against the logic of the spaces of white walls and the usual neatness of the galleries not in a literal way, but from a sensitive one. In CPU, Mia builds from your needs and without speculation: a monumental light and colorful display. The curatorial text was printed on balloons and can be read once they are inflated, hilarious. Something similar occurs in Ojo de cabra presented by Nina Kovensky in El gran Vidrio in the province of Córdoba. A story about the various experiences we have in front of mirrors. There are hands holding mirrors, hands holding cell phones, mirrors with unfinished drawings, mirrors that simulate surveillance cameras and different sound-luminescent systems that make up an ecosystem with a life of its own. Through the mirrors we can see a reflection of our face, of our life, but what of the life of mirrors? What is left in the mirror when movement passes? Are there mirrors beyond the light? A video made by the Sirenas Errantes in which they read the novel Aguas Vivas by Clarice Lispector says: “mirror, that crystallized void that has within it space to always continue forward.”[2] The answer resonates in an end-of-party scene where lights, like mechanical birds, keep turning to meet at a point that represents just that, an upcoming encounter. 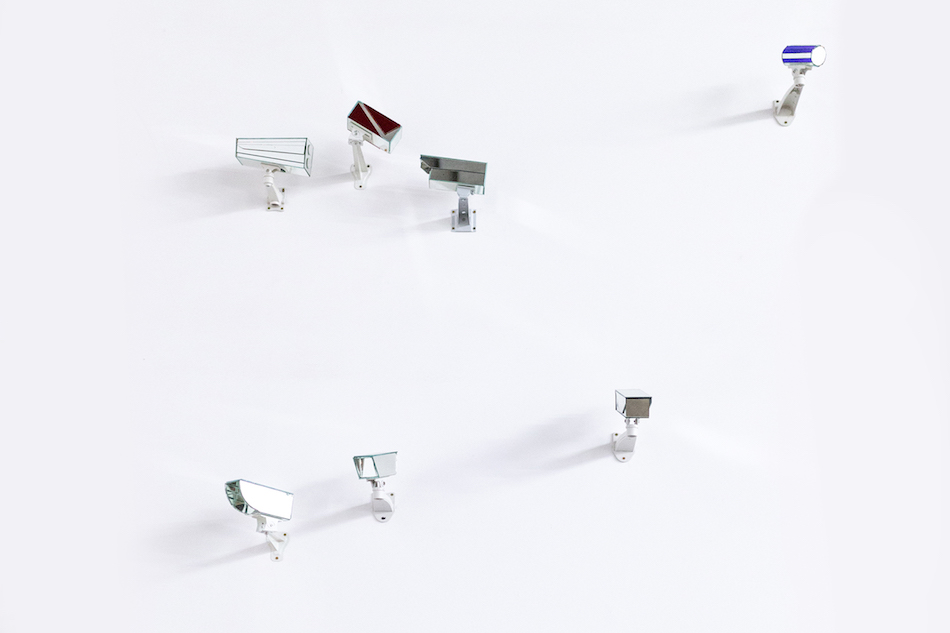 These four exhibitions provide different answers on how to reconvert spaces as territories made of tensions. Discovering the social sense of a space enables us to ask ourselves how to access it, and which are the material conditions for these spaces to exist. 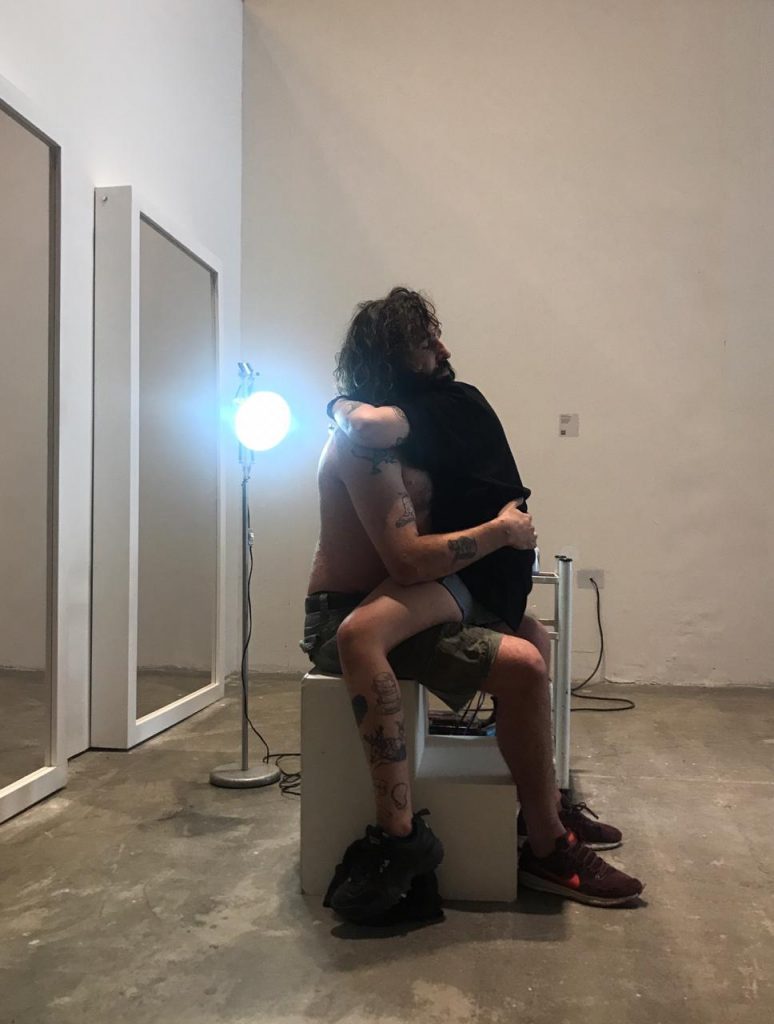 An amorphous effervescence is experienced in the neighborhood of La Boca, unexpected for many. In one day, you can visit Proa, Munar, Boca de Fuego, Barro, La Verdi, Sendrós and Constitución, all located just a couple of blocks away from each other. If you embark on this adventure your brain will probably explode into a thousand pieces. La Boca is a neighborhood that finds itself in the middle of art and gentrification; all intentions excepted, it is the eccentric activity that gets promoted. One gesture among many was the reading made by Entre Ríos-born Marce Estebecorena in Munar, a gesture that goes beyond the temple of art, beyond thinking of art as a solely economic instance. A voice that revolves around black tacos and a light blue carnival thong spits out Gualicho, a reading that tenses the muscles from the interior of the Paraná River, which has been on fire for months. A gesture that makes those who visit, those who take walks, uncomfortable, because taking walks is also a privilege. A gesture that does not deny the body but makes the body the very territory of the poetic encounter. And if it’s about understanding poetry through the skin, Carrie Becardino’s intervention Los murciélagos lucen mejor cuando la noche es rara about Lolo and Lauti’s Autorretrato at Barro Gallery raises questions on how to accompany pain. The mantra exclaimed by the tattoo needle mesmerized those who attended. Carrie sat on her partner Gonzalo Duro and hugged him, tattooing “I’m right side up, you’re upside down” on his back through the bizarre mirrors. You could feel the pain just by looking at it.

From different latitudes, the aforementioned projects modulate distinctive territories and tensions. What would happen if we were to mix more among ourselves? Something wild would be to literalize the movement. To travel, to camp, to share, to make fires, to host and to be hosted. How does this incentive manifest itself when talks no longer happen on Z**m? Is federalization a patch, or is it here to stay?