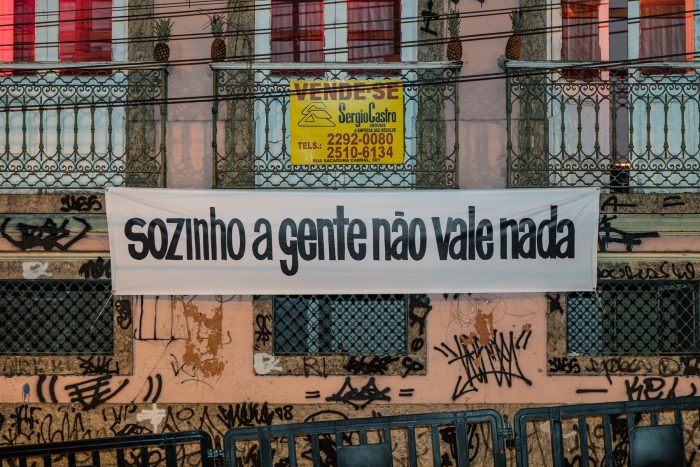 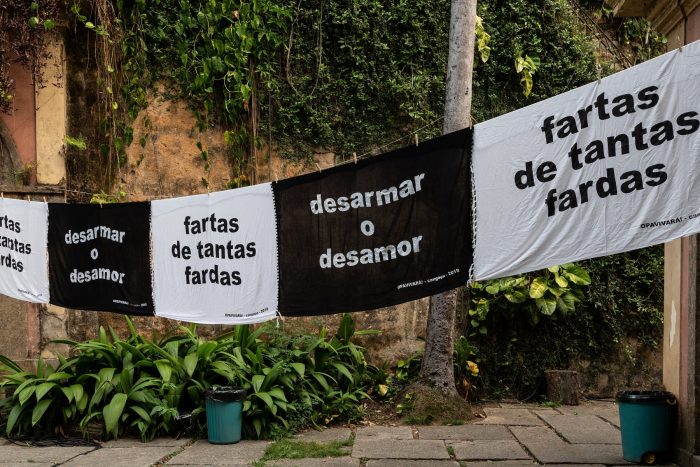 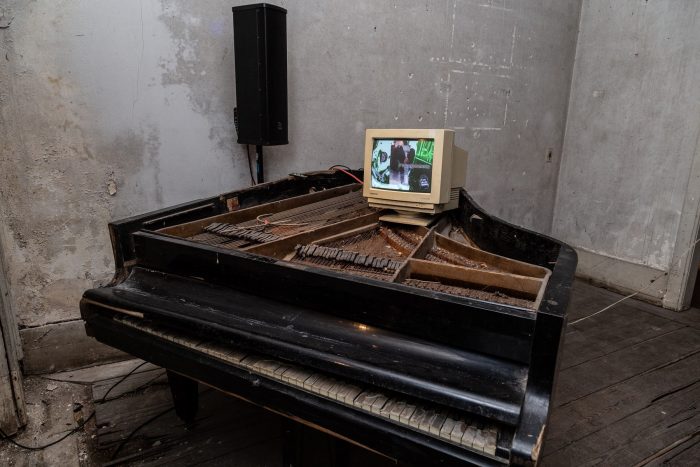 We’re all over a territory in dispute

Starting from the principle of an adinkra (vocabulary of symbols of the Akan people of the present region of Ghana) called Sankofa, this Manjar returns to the past to re-signify the present and build the future.

Yesterday, Solar’s activities began on December 8, 2015. Since then, 35 exhibitions were held with the collaboration of more than 160 artists, curators, researchers and educators from 16 countries and 18 Brazilian states. This house creates us and we also create it. Manjar is an exhibition built to cause our good meeting, the recognition of our partners and the remembrance of our values and causes. Confronting limits, we can braid collectively, with disputes and collaborations, new forms of existence, new ways of being in the world.

Today, SOLAR faces a critical and important moment: the house that houses us has been put up for sale. In recent years we have seen the ground open under our feet, we have seen the non-negotiable being negotiated: we have seen the spread of indifference towards the defense of humanist values, culture, climate and democracy. It is not surprising that at this moment we are facing yet another struggle for freedom. If you are here, you are part of this struggle to create together a place of art, exchange and creation, committed to a liberating education. Your friendship, collaboration and commitment, affectionately constituted over the last 4 years, are our greatest asset!

Now, we are facing this possibility for the future. We have works by 22 artists and collectives to integrate and celebrate this meeting of art and freedom. Yesterday, Today, Now presents in pairs eleven works already presented at the Solar curated by Bernardo Mosqueira and invited alongside eleven unseen works.

Here we summon the strength of contradiction, of the opposites that walk together, of duality, diversity and multiplicity so that we can extrapolate timelines, goals and schedules, to experience what has already been and what is to come. The need for struggle and political implication is presented in the works of Opavivará!, Traplev, Lenora de Barros, Moises Patrício, Anna Costa e Silva, Marcela Cantuária and Edgar. From the future, which allows us to look at the past with the interest of those who dig time.

From a meeting of desires and echoes the collective 01.01 offers us a Caruru for the Ibejis (twin entities of the Nagô people). Ibeji shows us that all things, in all circumstances, have two sides. Because they are children, they are connected to everything that begins and sprouts: the source of a river, the birth of human beings, the germination of plants. The fruits we harvest are alive in the works of Enrica Bernardelli and Erika Verzutti. The child is the beginning of everything. Many of the works presented here were elaborated with or by the children, among them Rivane Neuenschwander, Prili, Tiago Sant’ana, Denilson Baniwa and Mariana Guimarães. We walk together to a new beginning, a new stage and evoke these forces to teach, to bring the energy of creation and the opposites. The day has come to blossom and for this there is no better way than that of joy. Our desire to inhabit freedom is strengthened with the works of AVAF, Mariana de Matos and Marcos Chaves.