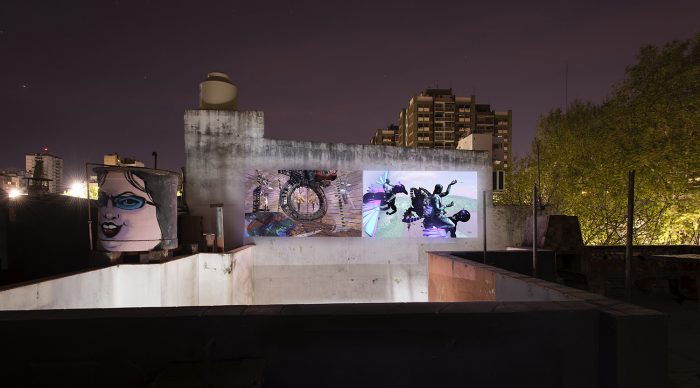 Camp Fires is one of those exhibitions that, literally, cannot be experienced without a map. In the domestic space of UV, which tends to turn towards the intimate, 16 video works from different parts of the globe are piled up, occupying every last corner. Gender Conscious Free Nail Art Tutorial, by Emilio Bianchic, hovers over the bathroom mirror on the second floor, inviting a strabismic contemplation, divided between the reflection itself and the artist’s tribute to makeup. American Reflexxx, by Signe Pierce and Alli Coates, hides in a tiny room that enhances the feeling of suffocation created by the work: a home video that follows the geographical and post-situational dérive of a non-gender character without a face, through the commercial area of an anonymous city in the USA. And thus follows, on the stairs, going through the stair breaks and even on the terrace, from where it is projected on a remote wall, the crossing of virtual imagination and videogames proposed by Jacolby Satterwhite.

Latin American history authorizes us, when it does not encourage us, to exercise suspicion against everything that is presented as “global”, one that at times borders on paranoia. A paranoia justified by the painful succession of colored lenses, pulverized dreams and various forms of fraud and violence familiar to this geography. It’s not surprising that caution abounds when traveling through an exhibition such as Camp Fires, a compendium that brings together works produced in such distant places, and contexts as diverse as Mexico, Uruguay, China, USA and Kuwait. How can they even coexist in the same place, the suspicious spectator wonders, the parody of certain Islamic traditions proposed by Fatima Al Qadiri and the revaluation of a pre-colonial Mexican mascot courtesy of Javier Ocampo, with the hedonistic burst in Fire Island that documents, or imposts, the House of Ladosha? The most politicized decree without major procedures that this meeting can only take place under the regime imposed by the imperial eye, more penetrating and fearsome than Sauron’s eye of fire. 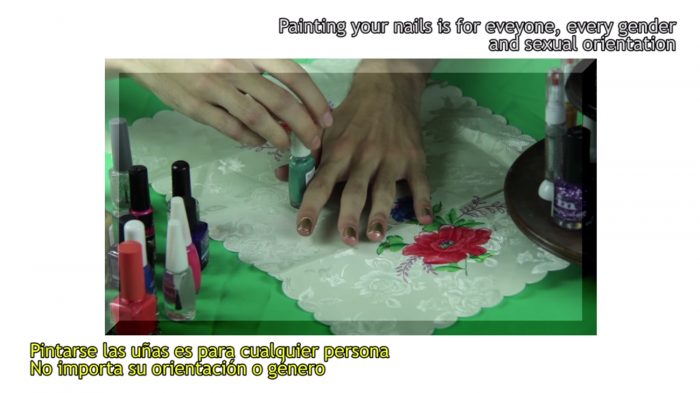 That these works are only possible due to the effective existence of an empire is something that is beyond doubt. What, with candor, we call “globalization” has provided these artists with the bare elements to produce their works: video cameras or mobile phones produced by international corporations, of course, but also the inclusion, sought or not, in the “contemporary art” system, which has a whole series of norms and protocols that allow for creation, and above all, the reading of these works. There is another global element without which this exhibition would not be possible: the experience, and the sensitivity, which the curators call queer, and which, as these works confirm, have long since surpassed the confines of their cradle in the metropolises of the white North to spread across territories of different colors, not always modern and not always urban. We know: queer —and the multiple voices and dissidences that it encapsulates—is one of the linguas francas of this battered empire, but no less effective for it, that begins after the end of the Second World War.

It has been discussed to exhaustion in activist, academic and artistic circles whether this term—and the political and theoretical perspective that it founded—can be used in other contexts without bending over the colonial offensive of which, whether they want it or not, all products that reach us from the USA participate. The benefit of the doubt arises from the detour that the term takes from its origin: queer, and everything that it encapsulates, was redefined in the North in the late 1980s as an expression of a dissidence; furthermore, it is subversion and militant political opposition. Similar to the dissident ancestry the term camp has, which knew how to name the capacity of different persecuted and silenced communities to play with the dominant and exclusive cultural codes, to re-signify them, and thus, make them function as weapons in the struggle for survival. This is the meaning that Kerry Doran, Violeta Mansilla, and Simon Wursten Marín rescue for their global mapping, reminding us that the history of colonial rule is also the history of the multiple forms of dissidence with respect to the moral and aesthetic norms imposed, and that the international expansion of capital has been answered at different times with a strengthening of internationalism, notorious in the Communist International. Thus, Doran, Mansilla, and Wursten Marín could say, paraphrasing Marx, that the queer spectrum travels the world. Or, better yet, that it sets it on fire, as the title of the exhibition suggests, that it shakes camp’s drowsiness—in the year of its institutionalization in the MET and its peak in mass-circulation—to open it to new uses, new intonations, new secret codes. 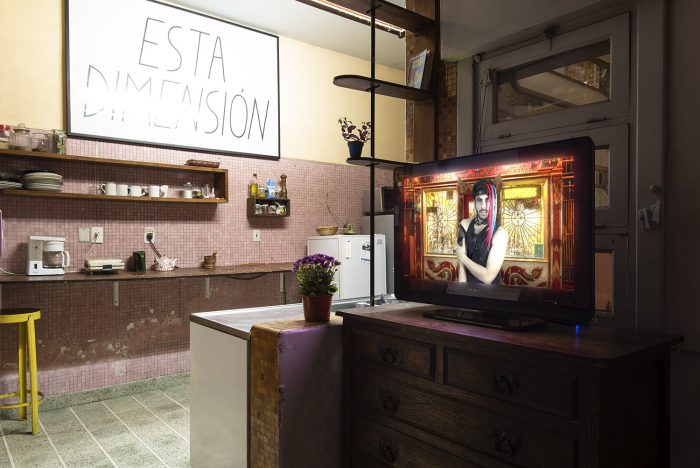 The camp fire, the fire, as a meeting place and a space to strengthen ties, is the ideal place to produce this displacement. And this exhibition wants to be a fire in at least two ways. On one hand, it wants to function as a meeting point for names, trajectories, cultures, languages and diverse genres. A space of cohabitation, sometimes forced, of artists and works that in many cases their faces have not been seen. And like every collective exhibition, Camp Fires proposes an art of combination and stakes all on the sparks that this chaotic and friendly coexistence can produce. We are then faced with an “open” exhibition, whose definitive figure depends largely on alchemical processes—of attraction and rejection—difficult to predict. And it is noteworthy that the curators want to take this opening and this indeterminacy to its final consequences, radicalizing the declaration at this conventional level—institutionalized until nothing is felt anymore—that it corresponds to the spectator “to close the meaning of the work”. Camp Fires does not imagine an audience dedicated to contemplation more or less crazy, more or less informed, more or less diverted. Rather, it proposes modes of movement through space and modes of use of works that necessarily produce, and will produce, an alteration of their coordinates. And it aims to challenge, and convene, a series of specific audiences through a program that aims to fulfill the promise of meeting and strengthening ties that we associate with a fire, and encourage the heat of the show to spill into academics echoes, artistic reverberations or activism networks. A week after the opening, for example, Emilio Bianchic gave a nail sculpture workshop with the participation of activists from the Trans Memory Archive. Crossing the screen that contained it, momentarily renouncing its work statute, Bianchic’s tutorial was emancipated to transform itself into knowing how to share with one of the most marginalized communities of Argentine society. And excuse for a long conversation about a local history of resistance and struggles that trans activists strive to ignite. 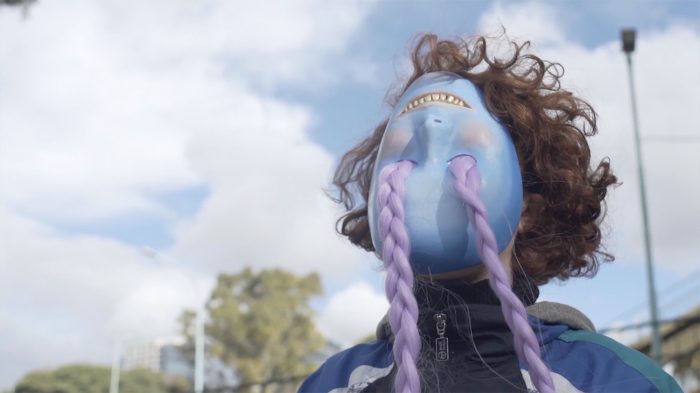 Camp Fires is thus inscribed in a venerable tradition. Practically extinguished from contemporary life, the fire has a very long and dispersed history, which in the West we associate with moments of communion with friends and with nature, but also with those illustrious ancestors that made the fire the circulation point of knowledge and the takeoff platform for all conspiracies: the witches. Without a doubt, this exhibition is an internationalist coven, a meeting of sorceresses and magicians from different latitudes, speakers of different languages and different cultures, all utilizing a connection with the body that tests Spinoza’s question for its limits and its power. Does anyone know what a body can do? The artists gathered in this exhibition seem to obsessively seek answers to that question, making their bodies not so much a standard of more or less stable identities (according to the logic of representation) but laboratories in which the scope of the human is cooked and the possibility that this evolutionary (?) milestone be overcome (according to the above-mentioned logic of experimentation). The human becomes thus an element to mix and match, a subordinate principle that adds to the queer reprogramming scene, as evidenced in the animal choreographic athletics of Young Boy Dancing Group, in the digital survival that SOPHIE gives its face, in the cosmetological synthesis of the woman designed by Jes Fan and in the ritual training that Florencia Rodríguez Giles illustrates, to name just a of the works. The beings that inhabit these and other interventions live suspended in a limbo in which the new does not finish being born because the old does not finish dying. Being the old and the new stress points in that long-time arc that we call humanity.

Yes. The evidence found in caves in South Africa indicates that the first fires were made by our ancestors Australopithecus robustus and Homo erectus approximately 1.6 million years ago. The appeal to camp fire, then, beyond the clever of the pun, seeks to question that which extends as an igneous thread from what was not yet an us to what, as this exhibition states, no longer is.