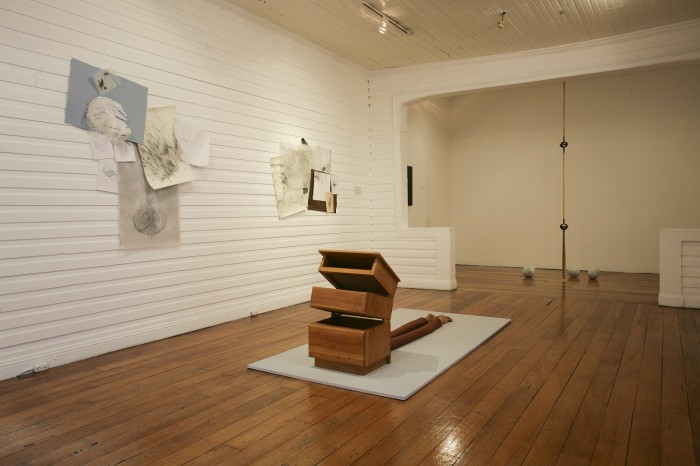 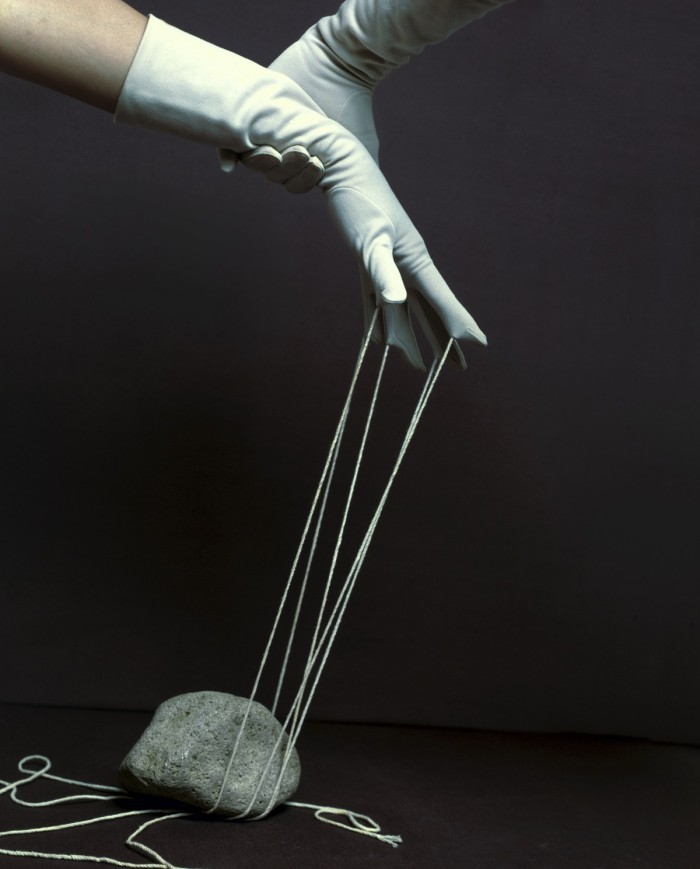 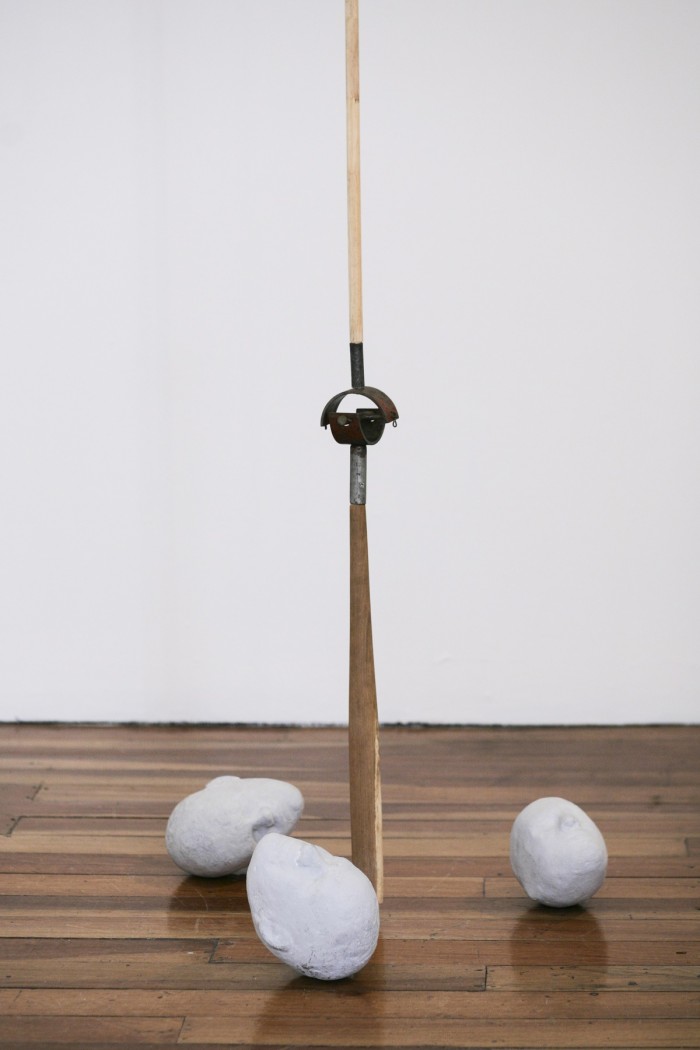 This exhibition is an abbreviated revision of three decades of work by educator and artist Patricia Belli (Managua, 1964), considered one of Nicaragua’s contemporary art’s precursors. To revisit the different aspects of her work is to enter a dialogue with a challenging and enigmatic language that has known how to explore the material’s memory, as well as its symbolic and cultural meanings, in order to translate intimate and social concerns. Belli’s need to reflect her context’s issues, as well as her conviction to art as a tool for larger transformations, have modeled her committed position, which does not end with her artistic production, but extends itself to the opening of spaces for research, exchange and collective learning.

This double dimension, as artist and educator, has defined her work for the last decade and a half. Belli is probably the most important figure in the critical renegotiation process of the artistic education in Central America. She has trained hundreds of young creators, from all of the region’s countries, in the alternative educational programs that she has lead in Managua, since 2001. Under the premise that teaching art is “fomenting the learning of a subversive occupation,” and the workshops and residence programs – such as EspIRA (Espacio para la Investigación y Reflexión Artística), TAJo (Taller de Arte Joven) or RAPACES (Residencia Académica para Artistas Centroamericanos Emergentes) – she has pushed new generations of artists beyond their limits. [1]4 In that sense, her artistic work and her pedagogical practice share the desire to conceive art as the place from where to bite reality, through the act of exposing oneself.

Belli approaches things attempting to identify a shared condition of vulnerability, as if recognizing that powerful forms of resisting the world’s violence are hidden within the ephemeral and the delicate. At the time of creating, her search for an epidermal seduction within the materials seems to be her compass. Belli examines them and employs them, in such manner that it is possible to perceive the texture of these elements (recycled fabrics, torn clothes, small pieces of furniture or thorns) as a testing field of pleasant, painful or erotic sensations. It is not fortuitous either that in her work from the nineties the “tactile” has a principal role. The artist bets on “an art that helps (us) get out of isolation,” which is also an open question about how art can confront a world that constructs selfish spaces of a profound individuality. [2] 5

It is revealing to see the recurrent way in which different images of fragmented and dislocated bodies have appeared in her work since the beginning. Representations of cut extremities, in works like Pies (Feet, 1986), Trampas (Traps, 1997) or Confundida (Confused, 2000), or the representation of bone structures or exposed organic systems, in works like La columna rota (The broken spine, 1996), Vejez (Old Age, 1997) or Objeto (Object, 2000), explore the implications of inhabiting a body, and the angst, shame and inadequateness that this entails at different points in life. It seems like Belli creates to be able to bring all her parts together. Her work is clearly conscious of what it means to live in a woman’s body in a patriarchal and sexist society. Some works allude to moments of affliction and extreme suffering, such as Sacos vacíos (Empty sacks, 1997), which presents the multiplied image of flat stomachs, from where a number of threads unwind in the likes of lost umbilical cords. The work, produced after a miscarriage, shows the body as a fragile container, in which a battle between living and dying coexists.

In this exploration of corporality and strange organisms, Belli also evokes the fact of having been born without hair follicles, which for her has meant living forever without hair on her head. [3] 6 The representation of a bald head is a disturbing and subversive image to the Western hegemonic norm, which regards a woman’s long hair as a form of verifying what a healthy, desirable, female, heterosexual body should be. That physical condition has allowed Belli to establish a highly critical relationship with socially assigned identity marks, which she ridicules and satirizes. The artist utilizes those signs of sickness and androgyny in the video Pelo (Hair, 2001), in which she invites us to be a voyeur in a game in which Belli and a wig defy and theatricalize her own gender and sexual identity.

Another important part of Belli’s work explores feelings of instability, commotion or lack of control. In several works, the artist embraces uncertainty as a way of contesting the fiction of human beings’ total control of what surrounds us, as well as evoking the unpredictable forces of nature and its ability to modify, in a profound manner, life’s own landscapes. The video Sísifa (2015) presents a distressing landscape of two fingers walking on a tightrope while holding a stone. In the collages Terremoto (Earthquake, 2014) or Huracán (Hurricane, 2014) Belli constructs seismic representations of reality, through the accumulation of small drawings and objects that translate the experience of imbalance. For the artist, this last series of works related to natural disasters and catastrophes, also allude to the body as a stage for disaster.

In more recent installation, Belli constructs dynamic sculptures through a game with weights and balances. In Porfiadas (Stubborn, 2015), three reproductions of a human head placed on the ground await for the pendulous movement of a baseball bat to be activated by the visitors. When thrusted, the bat begins to move from one side to the other, hitting each one of the heads over and over again. They move slightly, returning to the same place, exposed, once again, to the bat. Belli forces us to witness an act that evokes the never ending spectacle of violence, pointing out, once again, how dynamics of aggression are part of the processes of identity construction.

In Belli’s works there is an affirmative, yet disenchanted, dimension. Affirmative in the sense of proposing works that aim to reconnect us with our own fragility, in order to interpret the world from there. But also, disenchanted because of the way of placing us constantly in the social stage of brutality and terror, in which we coexist. Belli invents objects that make a strange mixture of happiness and disillusion, joy and complaint, collide, sharing the certainty that the most important task of living, is redefining our way of being in this world.

[3] It is a genetic alteration called congenital alopecia.

Through this section, monthly, we invite agents of the artistic system to share a selection of images related to their practice or current interests. Images are published daily in the header of our website and shared through our Instagram profile. At the end of the month, the complete selection of images is published together with a text that contextualizes them. Here is the selection of September 2021.