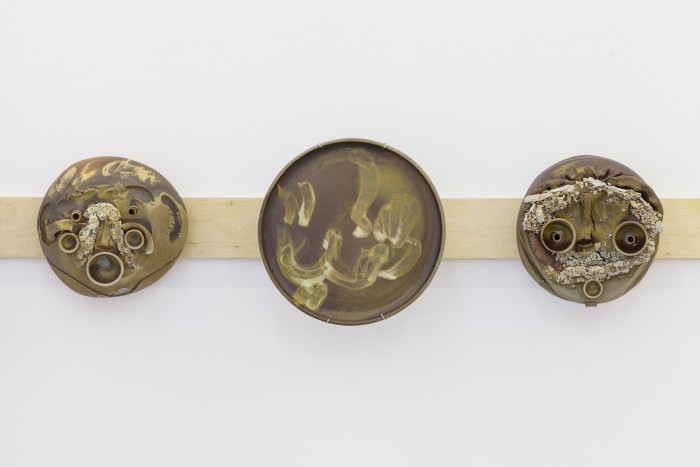 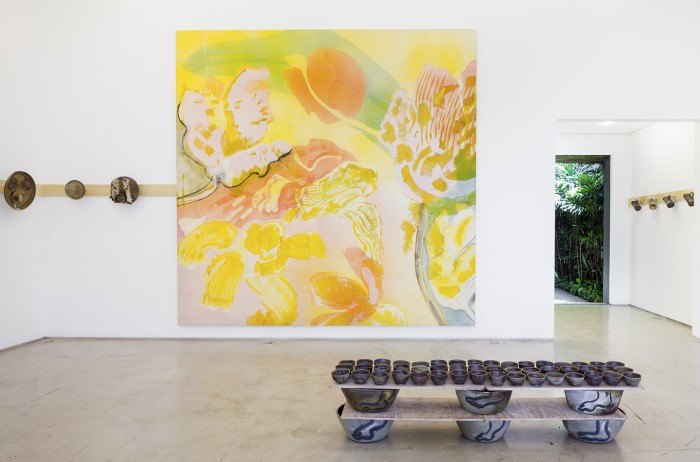 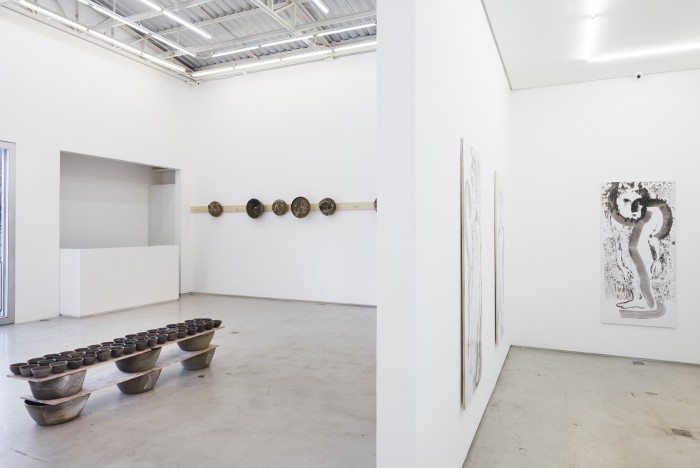 It’s been a while since Matthew Lutz-Kinoy last danced with fire. From the time when my thinking about his work began, this thought was tied to an idea of bodies, basically what makes and breaks them. In this exchange, I went as far as to objectify his artistic processes into a pinned down, marbled shelter, to think of his artist’s identity and his work as an object. Like an anatomy, multiple parts, moving, eating, talking, shifting around and on top of other structures, circling around, like the flight of a bird or butterfly perhaps, like winding crash barriers to our perceptiveness; this work stands as an invitation to a wide range of senses. My eyes touch on these things and some touch in return; at any rate, these wild flowers sprawl and wither away. It seems fair, to equally consider colors, shapes and the possibility of scent, growth and passing, to consider size. Today we call this process an experience. Everything is an experience and maybe it ends with that. But let’s return to the beginnings.

It’s been awhile since Matthew Lutz-Kinoy danced with fire —on May 1st, 2013 at 6:30pm, at OUTPOST Studios in Norwich, he originally presented Fire Sale, a medley of his most popular dance performances set to a live soundtrack by SOPHIE. He danced exhaustively around a flaming crate until it burned down, when a series of figurative ceramic reliefs were taken from the ashes. The dance itself was as an index of previous works and, at the same time, this index was objectified and transferred onto hardened objects, emancipated in its own right. Mainly at play was an interrogation of the inherently problematic idea of performance documentation, sitting somewhere between the anxiety that is the prerequisite for any document and the experience of the actual work. The artist’s preliminary interest to talk about biography, storytelling and inscribing narratives onto objects, to examine whether there’s an inherent social aspect to these privately made things —by declaring them as social because they develop a collective story around themselves—, came with the acknowledgement that developing a biography and personality is an implied part of this process. Bodies emerging.

In November 2016, Matthew Lutz-Kinoy began working with Silmara Watari, who mastered pottery in Mashiko, Japan, producing a large set of new ceramics (around 150 pieces) in an anagama kiln somewhere in the outskirts of Campinas, Brazil. Like Matthew Lutz-Kinoy’s principal interest in the liberties of the space where performance happens and how to deal with its afterlife, these ceramic works underwent different stages of (un)controllability in a process that mirrors the aforementioned ideas. The firing itself becomes a space of the unknown, where the burning of large amounts of wood not only hardens the ceramics but produces a pile of ash, which melts with the ceramic surfaces, adding color and texture. The shape of the kiln easily reads as an anthropomorphic figure, an incalescent body of bricks cooking silently amidst a bunch of pale Brazilian greens, flushing out spiders, scorpions and big toads. The narrative of the vessel, as it is built in relation to the human body, remains to be one of the most insisting recurrences in Matthew Lutz-Kinoy’s practice. In this case, it occurs as the kiln spins out of a central force, and its ceramics get vertically pulled into being, a motion that is mirrored and mimicked throughout this exhibition. In this way, the artist emphasizes the idea of a narrative, which acts as an index, testing its symbolic value. The firing lasts around five days.

Once enough ash has developed and the heat plateaus around 1250° Celsius, the fire travels through the kiln-body, spraying out of the chimney, touching everything inside. The ash gets stirred by wiggling a stick or shovel, performing a type of fire dance, which creates turbulence through which the ash adheres on the glowing ceramics. The ash flakes ride the hot air like birds or a butterfly perhaps. This extends the ideas of performance, movement and indexing, beyond the placing of the clay into the kiln, in a transfer of movements of the body and the fire, even through the firing process. In the end, everything needs to cool down.

In the exhibition, the two oversized floral paintings, behave like portals, painting as space, established on large amounts of canvas, interacting with the ceramics’ human forms and scroll shaped drawings. The latter act as narrative devices in lieu of language, as a schematic of the exhibition’s structure, an explanation perhaps. In general, Matthew Lutz-Kinoy exhibitions are realized as a sculptural space, which is demarcated by the different physical forms and media (ceramics, painting, drawing), emphasizing how space is expressed through duration.

I read these different elements and their formation with a simultaneous disregard and appreciation of their utility. This comes from the double sided situation that the rooms, housing these objects, delineate as much the space of their meaning, as these objects —through their supposed or negated function— designate the identity of these rooms, labeling them viceversa. This deliberate relationship invites function where there is supposedly none, and, at the same time, fetishizes the bare idea of functionality to a point of celebrated futility.

The human body remains to be the most prominent figure, either through depiction or as a scale for dimension, these limbs carry this narrative and disperse it. This body remains a projection of a vessel, merging with inanimate objects, a dismembered and fragmented figure, scattered. This idea, a collection of ceramics as an index of human form, calls to mind an ancient tomb where the brain, lung and liver, all the different parts, are kept in separate vessels, a distributed body.