“The exhibition is an open, urgent, and ongoing dialogue that echoes local claims and those of individuals, communities, and neighboring nations in the face of the climate crisis, the food crisis, the loss of knowledge, the destruction of ecosystems and species, and the continuation of colonial relations, among others.” 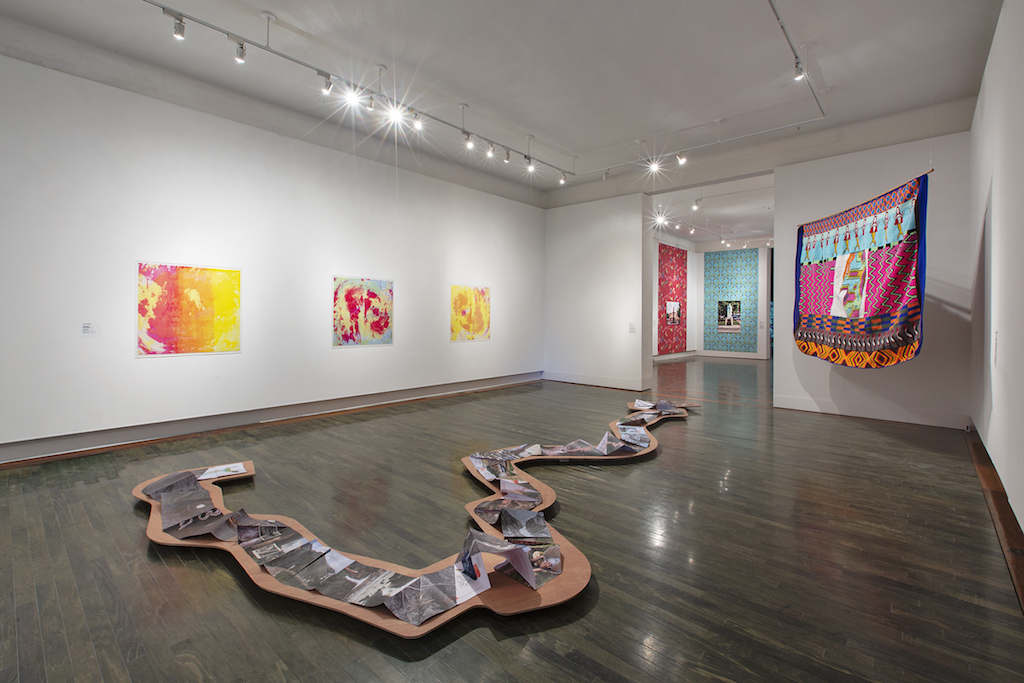 When I was a child, my grandfather taught me there is a knowledge based on observation and attention to nature. Thus, I learned that the appearance of winged ants shortly after the sunset, the increase in the intensity of the frogs’ croaking, the chirping of crickets, and even the cows grouping together and throwing themselves to cover the dry grass, are signs that anticipate rain. It is the same as the swallows fluttering in circles or the female yagrumo showing the luminous side of its leaves. I was born in the Caribbean, so I also learned that mango and avocado trees are hurricane indicators that almost never fail when they are full of fruit.

It was until I visited El momento del yagrumo, the exhibition presented by el Museo de Arte Contemporáneo de Puerto Rico, curated by Marina Reyes Franco, then I understood this knowledge was part of something bigger I had not related. With a brilliant museographic montage and works by 19 artists and collectives from the Caribbean and the Americas, the exhibition “examines three central topics: the rights of nature, the claims of sovereignty and resistance, and the recovery of knowledge through artisanal practices incorporated into contemporary art.”

In the curatorial text, Reyes Franco details that El momento del yagrumo “refers to the present, to the time after the passing of a devastating storm in which the strongest trees of the tropical forest fall and then the yagrumo can germinate”. Later on, she states that besides being a post-hurricane metaphor, the title “also points to the urgency of deeper changes in our relationship with nature.” However, more than the title, it is the exhibition itself, within the group of works presented and its network of approaches to the present time as a moment which points to that conjunctural urgency. 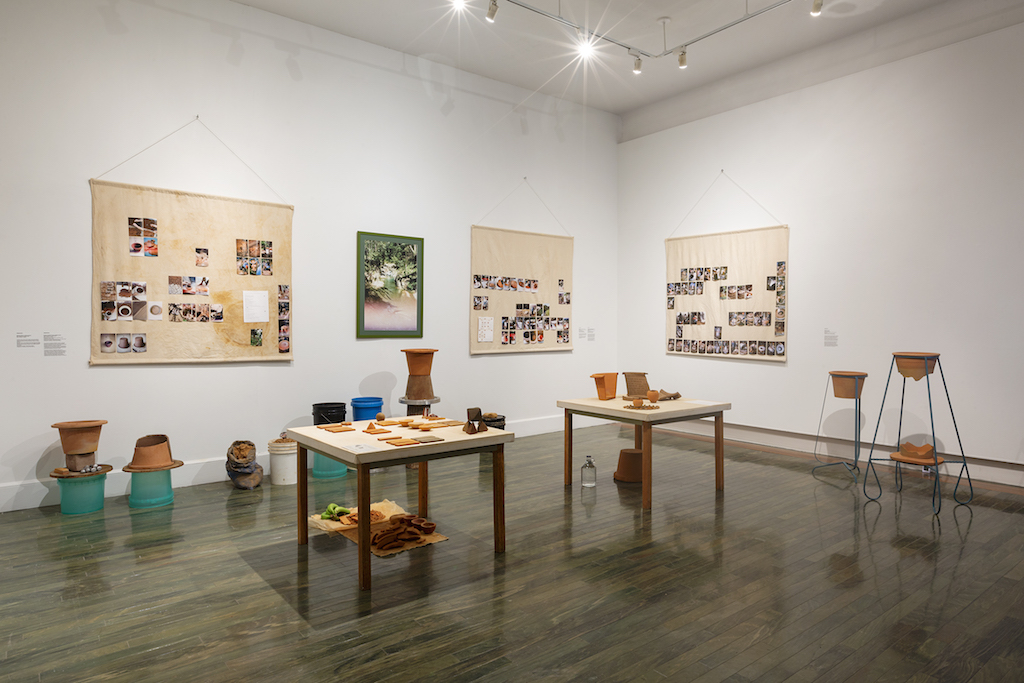 It is 2021 and Puerto Rico is still living in the aftermath of Hurricanes Irma and Maria. After their passage in 2017, the cyclones plunged the country into a humanitarian emergency that highlighted the weakness of its government institutions and infrastructure, its reality as a colony of the United States, and the scale of its economic and social crisis which began in the first decade of the 2000s. The traces of the onslaught and the subsequent period marked by a massive exodus and by the country’s recovery development—more interested in the visitor’s economy than in sustainability and in the non-dependence or environmental awareness—are visible in its landscape and, in a generalized way, in their daily life.

Hence, the exhibition is also an open, urgent, and ongoing dialogue that echoes local claims and those of individuals, communities, and neighboring nations in the face of the climate crisis, the food crisis, the loss of knowledge, the destruction of ecosystems and species, and the continuation of colonial relations, among others.

From the entrance of the exhibition; the silkscreen prints belonging to the series Doppler Landscapes (2109) by Guillermo Rodríguez, the installation Serpent River Book & Serpent Table (2017) by Carolina Caycedo, and el tejido a mano Silat (2020) by the Thañí group, invite us to reflect on the element of water with representations based on meteorology, hydrography, mythology, and craftsmanship. Later, this invitation is also extended by Guiddo Yanitto with his video Hacer agua (2012) and Amara Abdal with Proyecto Tierrafiltra, a living workshop that seeks to create a water filter with Puerto Rican resources and land. Both address concerns about the attainment of the element, or the making of it; ominous symbols of a future of scarcity.

In fact, water and electric power are resources constantly absent in Puerto Rico in the post-hurricane period. Regarding water, we can say; its lack and even the filter that Abdal seeks, speak of a country that has not known how to take advantage of the sea surrounding it to achieve a desalination infrastructure that achieves drinkability. Likewise, the lack of energy is evidence that in the country, as in many others in the region, there have been no solid public policies focused on taking advantage of the sea, the hydrography, the air, or the sun for the generation of energy that benefits the population and in repudiation of the dependence on fossil fuels. 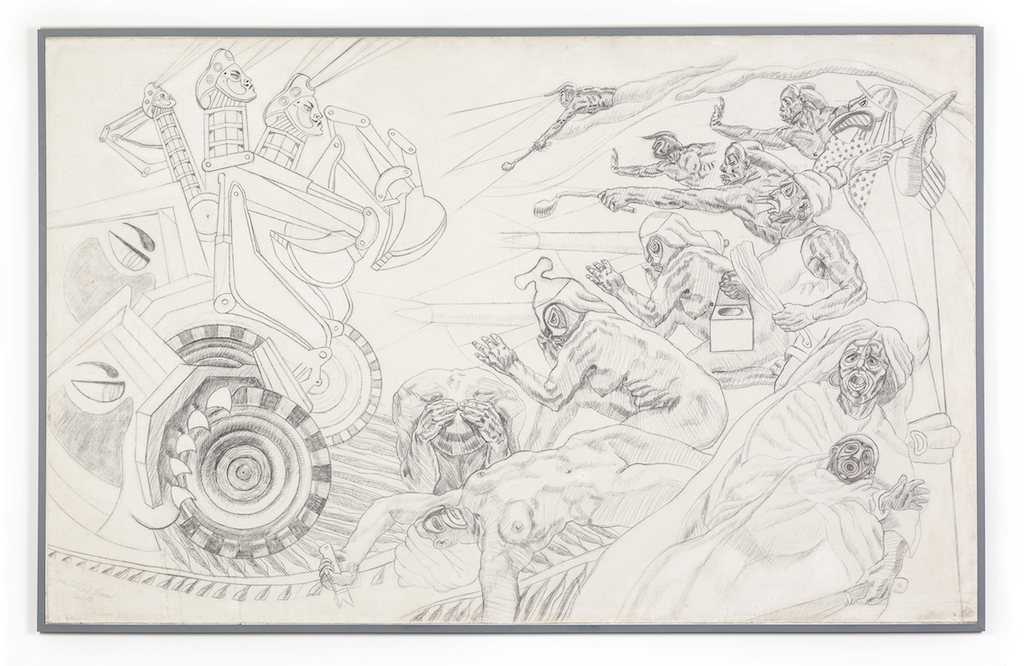 Nevertheless, it is necessary to clarify that in this post-hurricane Puerto Rico, or at the time of the yagrumo, important self-managed, individual, collective, and community projects have germinated, which continue to position themselves, exploring and educating about sustainable practices and solidarity with the environment even from the point of view of art.

A look at this type of management—urgently needed all over the planet in the face of the violence from the State and capitalism, as well as that already present in climate crisis—is achieved in the exhibition with the inclusion of the installation La Agroteca by El Departamento de la Comida, as well as in the powerful videos Selva Jurídica (2014) by Ursula Biemann and Paulo Taváres, and El gran silencio (2014) by Allora & Calzadilla. There is also much of this in the imposing drawing 1980: Batalla en torno al cuerpo de la gran Vejiganta: Tocones (2010) by Daniel Lind Ramos in which a collision between an ancestral community resists the machines of progress is glimpsed.[1]

Later, the digital prints on photographic paper in Diccionario de objetos olvidados (2016) by Marilyn Boror Bor, invite us to reflect on the loss of communities and knowledge including language. In the same way, Natalia Ortega Gamez addresses power relations, of the punished and the punisher, and aggressions in the Caribbean with her sculpture Disciplina (2021).

It is pleasing to say that the questioning and counterproposals from the creative and artistic production to the forms of development and evolution of the present, without ignoring the imaginaries of the future, are a constant giving pulse to the exhibition.

And this is also its achievement in and from a country in bankruptcy, almost privatized, full of ruins, and vulnerable to climate change; a country where museums, knowledge-generating institutions that must be in tune with the realities of the places where they exist, have been timid in participating, joining or making visible the community and collective struggles with all their nuances and the role of the artists in them.

Along the same line, the ceramic pieces of Alice Chéverez and Evarista “Varín” Chéverez, from Taller Cabachuelas in Morovis, a municipality located in the central zone of Puerto Rico, highlight the importance of relearning, practicing, and teaching techniques as a method against disappearance, advances, erasures, and collapses. Mother and daughter bring back the aesthetics, knowledge, and processes of indigenous West Indian pottery by condensing years of researching reference images and archaeological finds.

In addition, the watercolor trays made with local clay by Karla Claudio Betancourt titled Madre de cinco sangres (2021) and the installation Tratado de muchas cuevas (2018-2019) by Javier Orfón evidence the importance of mother-daughter entrepreneurship and the transfer of knowledge to new generations of artists. 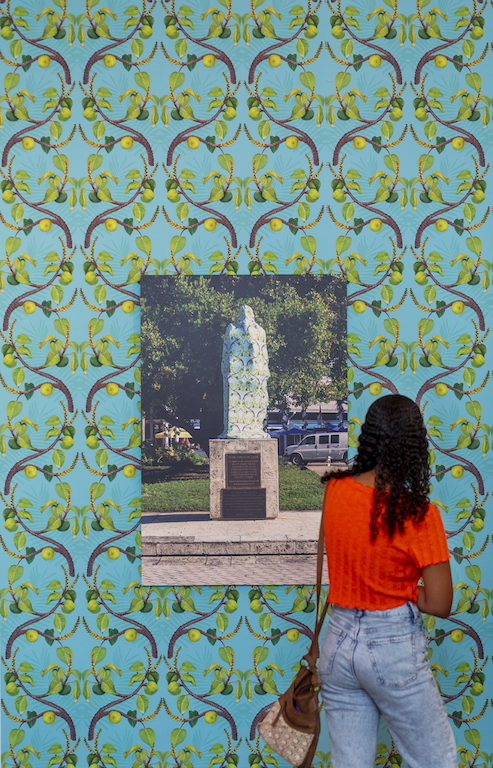 Not far from this, surprisingly inside one of the rooms of the exhibition, a huge Cayuco (2019) is presented. This is the result of the research and dissemination project Canoas, cayucos y balsas undertaken by Engel Leonardo on Antillean navigation and the knowledge derived from it regarding the indigenous people and descendants of the region.

Finally, looking at decolonization, emancipation, and freedom as the hopeful path that the exhibition places before the eyes of its visitors, I must mention the tropical prints and photographs of Joiri Minaya’s in the series Encumbramientos (2019-2021), and Femme Minotaur (2021) by Cristina Tufiño.

As an action and response to the colonial and patriarchal past exalted in monuments still standing, Minaya—using ethnobotany and redefining them—covers them with floral-printed fabrics used by native, Black, and Afro-Caribbean people for healing, casting out evil spirits and protection. The yagrumo, also known by metathesis as grayumo, appears in them. Tufiño’s sculpture of a minotaur with feminine forms—as reflected in the title, sitting on a piece of a pigmented oak trunk that fell during Hurricane Maria—is a sort of monument-homage to her grandmother, family, and matriarchal power. It is striking that the sculpture made of bare clay seems at times to be observing and at others, it seems only to remain serenely in the present moment, perhaps growing or germinating like a yagrumo on something high up that also collapsed.

And then, my grandfather’s reminder: “Everything will change, so it’s important to be in tune with the earth.”