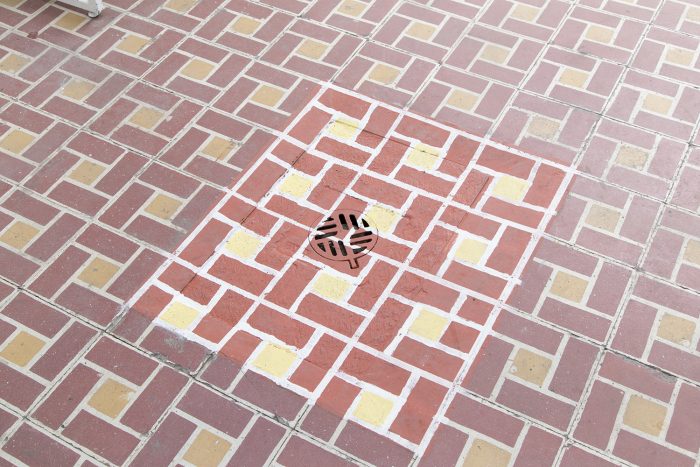 Some time ago I began to suspect the immutability of the oh-so famous institutionalized “white cube”. I suspect its hygienic illumination, the distance that prevails in its social dynamics, the numb language that sustains it. Too predictable. Too stable. And although the purity and sterilization created by modernity have undoubtedly been contaminated by dissident and risky proposals, it has made the frivolous pretense of certainty its most enduring essence, which in turn is complicit with the consumerism of a hyper-accelerated spectacle society. Disturb it is the necessary fertile constant.

According to Professor Stavros Stavrides, spaces are a fundamental power for the projection of other possible social worlds. Being these spaces inhabited through the disposition of objects and subjects, shared worlds are shaped through the social interactions that they arouse. As an echo of the decolonial call of causing total collapse as the only way to re-invent ourselves, Stavrides points out to the need to (re)create the spaces starting by destroying them. In this way, we can find the power that lies in effecting (performing) social relationships as that ability that allows us to create our own history as human beings. Following Virno and Benjamin—and without realizing it also following the Aymara knowledge about time—, Stavrides proposes to fracture the Western linearity of History so that the potentialities of the unrealized past, those that failed to manifest themselves, those that allow us to re-think what is necessary and urgent to change to dismantle the instrumentalization of spaces by capitalism. How do we re-experience spaces in a present-future that promises their end as we know them? Is there a way to inaugurate other sensitivities that allow us to prepare ourselves for this imminent transformation of spaces and their effect on social relations? 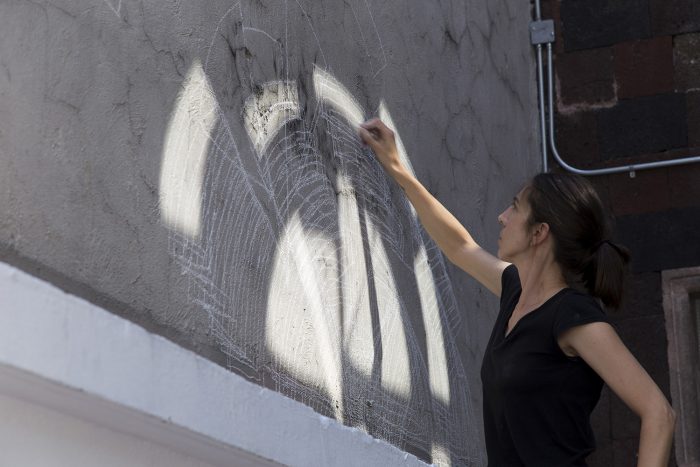 ESPAC, in Mexico City, is one of the many exhibition spaces that inhabit architectures that were originally thought of as homes. Located in a mostly residential area, the daily life that flows through and around the perimeter of this house encourages the re-signification of the “white cube” from the artistic and museographic. Faced with the urgent question of how to re-signify the encounters that arise in an artistic system that exceeds itself, the ESPAC team, Ana Bidart and Armando Rosales collaborated in Distancia doble to explore the exhibition space from an artistic sensibility that subverts the inhabiting of the house as a potential way to open reflections on the inhabiting and the common. In dialogue with works by Roberto Matta, Enrique Guzmán, Wilfredo Lam, José Clemente Orozco, and Carlos Mérida, who are part of the ESPAC collection, the artists burst the abstraction that characterizes them to establish spatial and conceptual relationships from their own explorations and artistic and personal reflections. These works represent unstable bodies in a constant flow that confuse, dislocate and stress the typified figures of the physical, both in its material and anatomical aspect. Created throughout the 20th century, that one century that inaugurates existential crises, this set of works is relocated to the present as an urgent reminder about the potential of reimagination as a way of freedom. As one of the set points of our social relations in the art system, can the exhibition space trigger a re-configuration and re-signification of our inhabiting as an “artistic community”?

By means of subtle gestures, Ana Bidart urges us to recognize the vitality that runs through the house that evolved into an exhibition space. Her works are the documentation of a space in movement in relation to the environment and the body that inhabits it, be it the human body or the body of artistic works. Ana integrates into the exhibition the temporal and meteorological dimension when tracing the path of sunlight on the wall of the exterior patio of the house (Velocímetro, 2019) and when placing a sheet of paper in one of the corners of a high wall of the inner courtyard, same that is made present through its shadow and sound when blowing in the air and giving it movement (Hoja de sala, 2019). Light and wind are present through a poetics of contemplation to recognize that everything realized by the human being is an extension of nature that inevitably affects it and that consequently corresponds to us.

In the interior of the space, Ana demonstrates the transformation of that same space that resulted from the physical work of the exhibition’s installation. Materials such as paint or tape are mimicked with the ground and the corners of the architecture to be part of the history of ESPAC through the traces of past exhibitions that our attention does not take into account. The accidental and fortuitous appear here as a small revolt of the senses of a gaze accustomed to going through an exhibition always facing a disposition of objects that are hardly distant from the standardization of museographic designs that organize them. The disorientation of the gaze as a metaphor to imagine other ways of subverting the spatial. 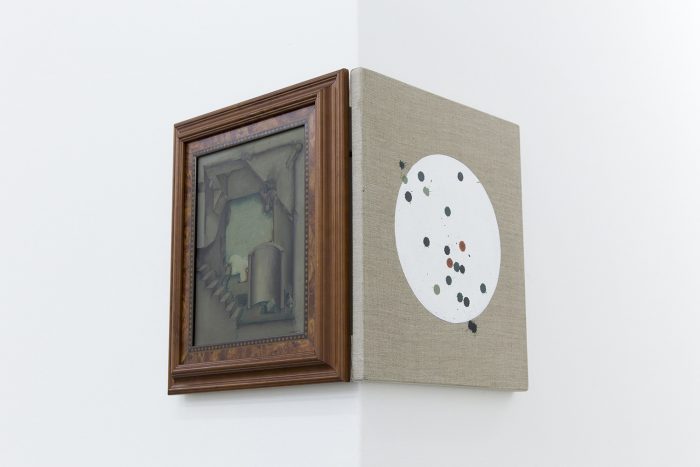 The experimentation of other ways of living together is only possible when vulnerability is its starting point. The hegemony of the sociopolitical and cultural system that organizes and manages our reality imposes distance and insensibility through violence and fear to annul all power of communality, of “making life from the common” in the words of the Mixe thinker, Floriberto Díaz. To recognize physical, emotional or spiritual wounds is to recognize the possibility of healing. Is the exhibition space a space that allows for shared vulnerability? Armando Rosales diffuses the interior and exterior by perforating the architecture of the ESPAC house over and over again, crossing the boundaries with thick knotted ropes that allegorically unite what has been naturalized as opposites (Flujo 2, 2019). By making the stability of the “white cube” vulnerable, Armando reminds us that the work of art is reciprocal to the world and that it’s not only contained by the space that exhibits it. Likewise, he recalls that in exposing our artistic and intellectual work, we expose ourselves by diluting the margins between the labor and the personal (public and private), invariably linked aspects affecting each other. Recognizing that an exhibition space presents us with vulnerability, that is, thoughts and feelings of the artists through the work—although it has its own autonomy once it is created and presented—is a possible path to re-signifying the multiplicity of contexts that we share through art and the social relationships that take place in them. In what way can we sharpen the intrinsic forces of the exhibition space so that they affect the policies that organize us as an “artistic community”?

One of the richest collective habits that art allows is the proximity that the spatio-temporal encounter of bodies arouses through objects, actions, and ideas that crystallize our socialization. However, at present, this proximity is almost entirely mediated by eventualities triggered by consumption and spectacle logics, same that dilute the power that lies at the confluence. From a reflective awareness about how we affect from the body and how other bodies affect us, both artists trace relational tensions. 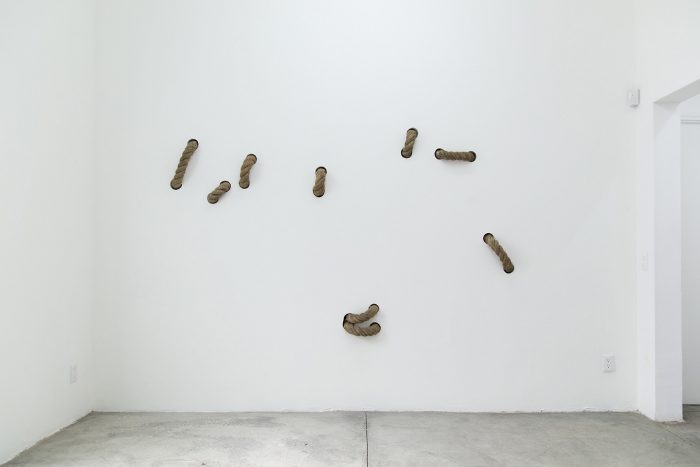 Bidart, through the series of paintings titled Tiro al blanco, provides a new body to some of the works exhibited from the collection. It seems to depart from an important observation: why is the masculine sensibility the one that inhabits the exhibition space? Ana makes a subversive reflection of the color palette and composition in the works of Matta, Mérida, and Guzmán through a still gesture of dripping that dismantles the masculine myth of modernity in art. Sensibility as a continuous subversion.

On his part, Armando intervenes in the pre-established order of the exhibition space and its exhibition protocols with the intention of re-signifying the context: it reveals the interior coating of drywall when discovering a window that has been hidden (Doceavo uso de lo ajeno: la vía, 2019), and in turn manipulates the automatic artificial lighting system to darken the room every certain period of time. Contrasts are revealed while the gaze becomes accustomed to the darkness. In this way, the artist interrupts with the experience and affects the perception and appreciation of the works by disorienting the public’s gaze.

Every unfolding and organization of artistic work and discourse involves the body and, therefore, the policies that affect it. To put in tension the common habit through reimagination, is here a proposal of continuous experimentation that will be carried out in ESPAC from now on or an isolated exercise that runs the risk of being reduced to the anecdotal? Personally, the act of this aesthetic politic of disorganization and destruction of spatial certainties in the field of the institutionalized white cube is rich and substantial. We now have to replicate this destabilization of certainties assumed to open spaces of poetry where body, object, and space are revealed in their multiplicity.