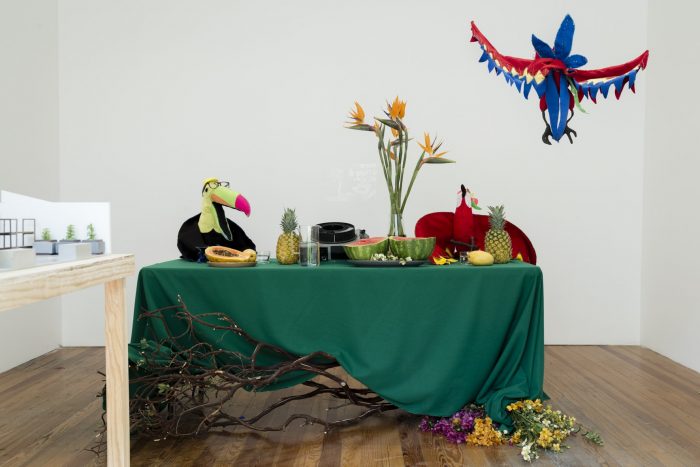 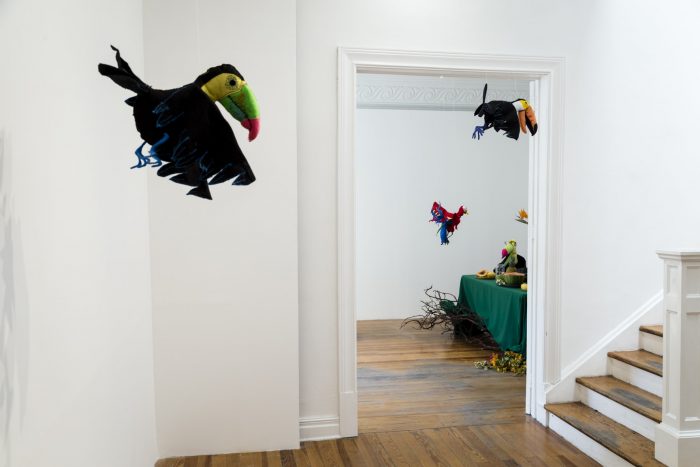 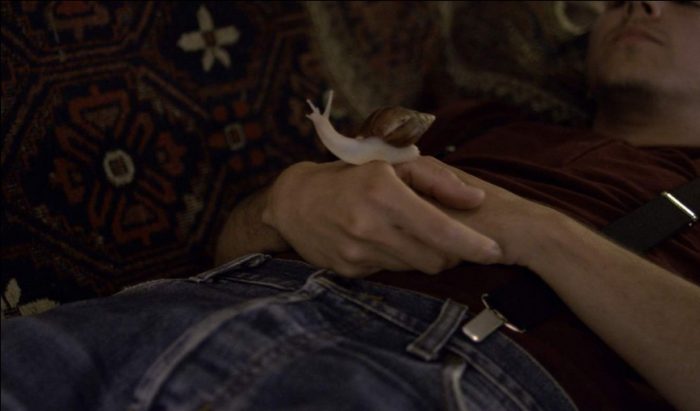 “Doireann O’Malley’s Prototypes are a trilogy that explores gender and its manifestations in a post-speculative mind/body assemblage of scenes, set within the modernist Interbau housing development in the Hansaviertel area of Berlin. In the films, the viewer is guided sonically and visually through various dream- and land-scapes, observing psychoanalytic references to both shamanistic pasts and speculative futures that evoke alternate modes of existence. We meet the protagonists who interact with undefined technologies and it appears ambiguous as to whether they are rendering themselves in a virtual world, a potential future, or creating their present. In fact, throughout Prototypes there is little to distinguish between ‘the symbolic, the imaginary, and the real’.*

Wendy Cabrera Rubio and Josué Mejía present a multimedia installation titled Apocalipto. In it, a robot toucan and a macaw hold a discussion about Mexican identity through some of architect Pedro Ramírez Vázquez’s work and projects, related to the representation of the Mexican nation in the mid 20th century. Their conversation revisits problematic aspects of representation in the Anthropology Museum and of indigenous people. Not only confusing aspects about Mexican historical identity are key to the project, but also the values of replica in regards to scaled versions of modern Mexico for exportation, to know how to create the fiction of the indigenous world and at the same time synthetize live cultural systems are questions brought up through case studies such as the theme park Xcaret, in which 1:1 replicas of the Mayan world take part in the intention to demonstrate to the world the rich and complex cultural heritage of Mexico—a state strategy of appropriation of the Pre-Colombian arts.

Josué Mejía was born in 1993 in Mexico City, where he currently lives and works. He graduated in Visual Arts & Design at Universidad Nacional Autónoma de México. He is currently enrolled in the Educational Program of SOMA. (2018). He has participated in the Young Creators Program of FONCA (2017-2018) in the category of Alternative Media. In addition to his artistic work, he was part of Galería Autónoma FAD and he is currently a collaborator in the Laboratorio de Instrumentación Espacial LINX in the Nuclear Sciences Institute at the National University of Mexico. His work has been presented in the Guanajuto International Film Festival (2016), in the short documentary selection and in independent spaces such as NIXON, Mexico, (2017), Bikini Wax EPS with HG build fighters 1/144, Mexico (2017), and el Colegio Nacional en Libertad por el Sabor, México (2017).

Doireann O’Malley lives and works in Berlin, Germany. Prototypes was the winner of The Berlin Art Prize (2018) and has been exhibited in The Hugh Lane Gallery, Dublin (2018); the Edith Russ Haus für Medienkunst, Oldenburg; Bobs Pogo Bar at KW; Spektrum, Berlin; Mumok, Vienna; Rencontres Internationales, Paris. Doireann is currently participating on The Berlin Program for Artists, and is a recipient of the Berlin Senat Stipendium with upcoming shows in Göteborg Biennial (2019). A publication based on Doireann O’Malley’s multi-screen film installation Prototypes was recently published, produced by Dublin City Gallery, The Hugh Lane, co-published by Sternberg Press and The Edith-Russ-Haus für Medienkunst, with essays by Lou Drago, Caspar Heinemann and Joel Kuennen (2018). Some of her works can be found at collections such as: Office of Public Works, Ireland, Bank of Ireland, Limerick City Gallery, Ireland, University of Ulster, North Ireland. O’Malley’s work references scientific and medical investigations into the human psyche that address wider philosophical concerns relating to biology, gender embodiment, sexuality, utopianism and biomolecular advancement in human evolution.

*O’Malley’s text is a condensed excerpt from the essay “Queering Boundaries” by Lou Drago, in Prototypes, Sternberg Press and The Edith Russ Haus for Media Art, and the Hugh Lane Gallery, 2019.

**The exhibition was made possible thanks to the generosity of Culture Ireland.