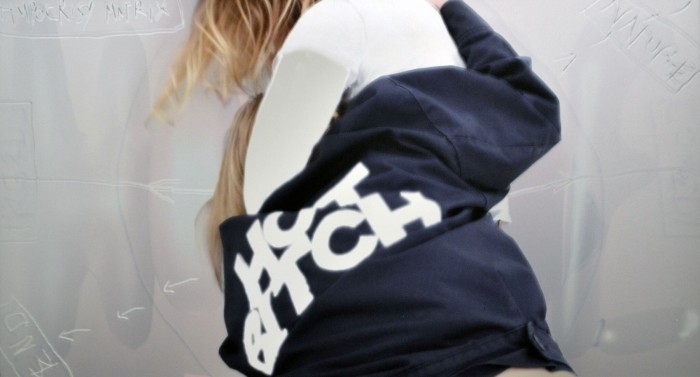 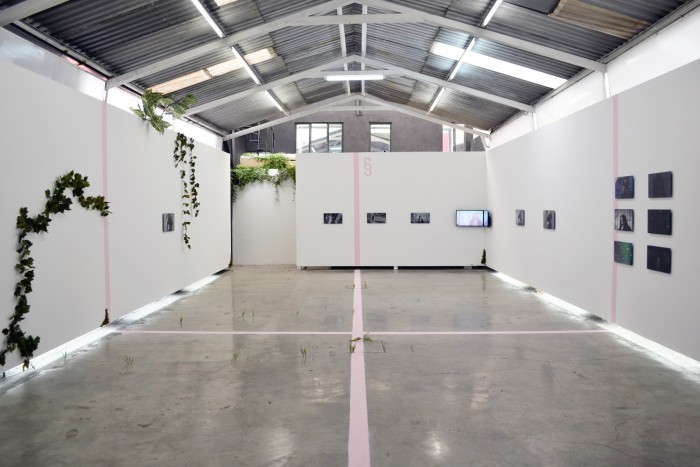 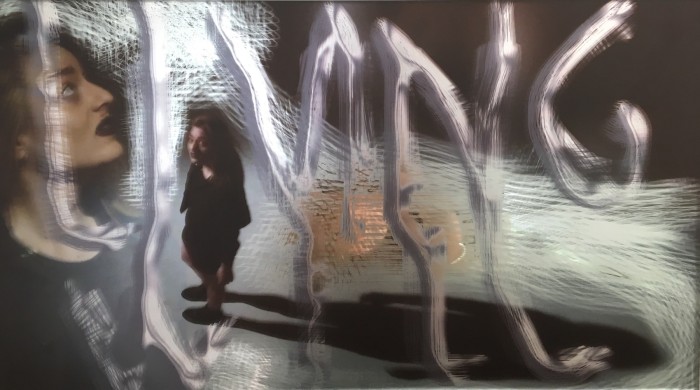 In Discovery, her first solo exhibition, Casey Jane Ellison is both brand and politician, reality TV star and inspirational cultural icon. Installed in The Hypocrisy Matrix, a three-dimensional graph designed by the artist, Discovery charts Ellison as she fluctuates between clarity and solipsism, between criticality and delusion, as she attempts to grasp at her position in a foreign context —a comically flawed emissary of US cultural hegemony. Each of the works sits along an X-axis labeled “Guilt and Innocence”, a Y-axis labeled “Comedy and Tragedy”, and a Z-axis extending from “Nature” to “End”. Here, Ellison’s work moves away from parody towards a more earnest exploration of her social, cultural, and political entanglements as an artist, a woman, and an American.

Working in Mexico City, the artist’s terrain of inquiry is broader than ever before. She asks, how do we, as individuals, contend with the failures of capitalism on a personal level and on a global scale? How can she confront her own complicity in an imperialist scheme? Is there anything she can do or say to help you to understand her? Indeed, the exhibition’s title, Discovery, evokes colonial narratives as well as the language of self-reflection. The sobering implications of the artist’s pursuit are evident in her repeated attempts to grasp at a coherent explanation.

The formal language Ellison employs in Discovery functions both as a vehicle for communicating the artist’s vulnerability and sense of disillusionment, as well as a means of implicating the viewer in the very process of self-reflection she models. Like the cries and complaints of children, the mantras of dissatisfaction that comprise the Babies series register the artist’s despair at a global political predicament, as well as her yearning for the renunciation of responsibility —a plea for acquittal. It is to this appeal for care that the bejeweled slogan of the Hot Bitch campaign offers itself. At the (0,0,0) point of the graph —the place of purity in a space where nothing is neutral—, Ellison posits “Hot Bitch,” a fragmented expression of self-affirmation structured as an advertisement. The Hot Bitch images, like the jacket itself, employ the reductive language of mainstream culture to support intimate encounters between bodies that challenge normative, binary constructs of gender and sexuality. Printing her cross-examination of vanity on mirrors, Ellison extends her solipsistic inquiry to the viewer. The viewer who catches sight of their own face in the Hot Bitch jackets or in the Babies pleas is invited —or rather, incorporated— into Ellison’s conflation of self-obsession with self-improvement. Underlying this all is the recognition of the absurdity of this enterprise; we have no other recourse but our selves, and yet what means do we have to move forward. Ultimately she is trapped and we are trapped with her, an image in a mirror.

Ellison accesses these uncomfortable truths by offering up her subjectivity and her practice as objects for scrutiny with humor and wit. She succeeds in turning the viewer’s attention towards a theme little explored in art history: the artist’s own engagement and complicity with systems of structural violence. Ellison uses the vulgarity of commodity and selfie culture as a resource for personal discovery, transforming the hypocrisy and embarrassment the work embodies into a form of communion, a therapeutic means of connection. Maybe it’s not a path to redemption, but can this language help us figure out how to be?

Casey Jane Ellison’s Discovery is the first show of an ongoing exhibition program at Anonymous Gallery in Mexico City in which artists are invited for a two-month period of research and production. The program’s goal is to facilitate alternative forms of intercultural dialogue between the United States and Mexico. Artists in residence are encouraged to engage with the community, source materials, design supplementary programming, and develop a body of work. Each artist will also produce a limited edition and a small publication in conjunction with the gallery.