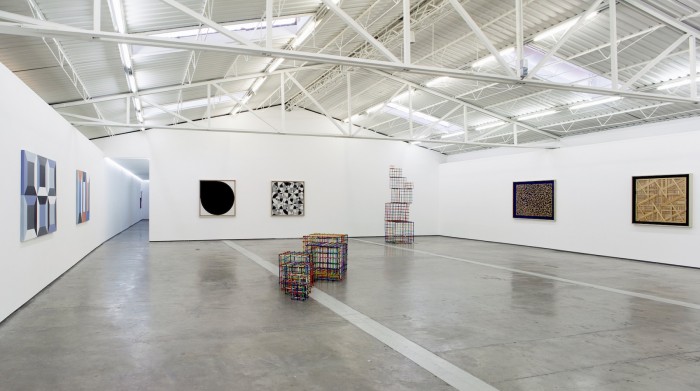 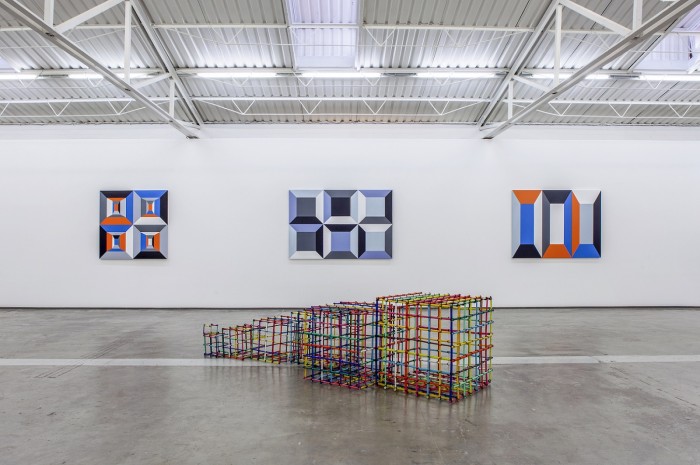 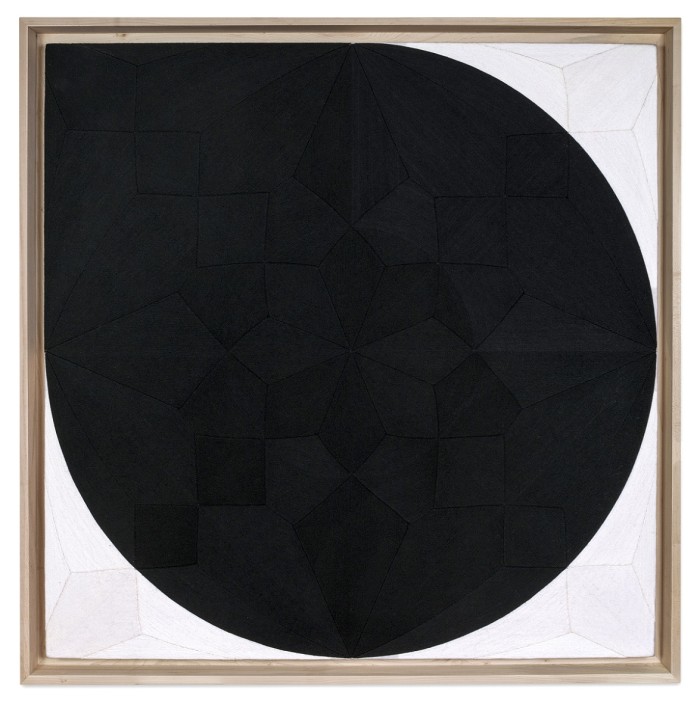 More than a small retrospective, this new exhibition by Eduardo Terrazas offers itself as a tentative to encompass the wide register of techniques and mediums that the artist has been exploring since the very beginning of his career. However, it can also be seen as an exposition that seeks to recapitulate the long trajectory of Terrazas as a visual tist, given that the earliest piece in the show dates back to 1970 —or, at least this is the year of the drawing, which gives the shape to a painting on view at the exhibit: a scheme of contrasting colors that welcomes the spectator at the end of the gallery’s staircase and that reminds us of the discussions that took place, at that time, over the interaction of line and color. Also from the 1970s is the series of photographs displayed in the back room of the gallery. This means that, on top of the variety of processes and techniques, the show embraces more than forty years of plastic experimentation.

Since the 1960s, Eduardo Terrazas has complemented his architectonic practice with a two-dimensional investigation —running parallel to the design and construction of buildings— which, without a doubt, feeds on his understanding of what it implies to work with volumes and physical structures and not only approach those matters with theoretical assumptions on paper. Hence much of his work as an artist —which, in fact, uses as starting point the pages of a notebook— has an openly constructivist air that, occasionally, can surpass the surface and extend into space. This is exemplified in an extensive mural, displayed in the gallery’s patio, assembling a series of wooden blocks, inked with aniline, like some board games such as Jenga. This piece, 14.23 (2014), is accompanied by three additional works from the series Everyday Museum, where the image is constructed according to a logic of progressive cancelation of empty space that is being filled with elements taken from the everyday, such as wooden rulers, toys, dusters or fibers used to wash. Thus, the organization of found material becomes the crucial part of a process that determines the final form: an abstract way of observing and commenting the mundane.

Something rather similar occurs with the body of work made with wool yarn on wooden board from the series Possibilities of a Structure, of which four are on view in this show. As the title might allude, these pieces of notable investigatory nature, present each a new possibility for a determined structure. Possibilities of a Structure elaborates variations of geometric configurations, which Terrazas had outlined in the 1970s and that defined his artistic practice from the very beginning, essentially, as an ars combinatoria that seeks to exhaust the almost endless variations that can result from one basic figure. From the combination of elementary shapes, such as circles, squares, lines and curves, the artist creates a complex visual experience that emerges through the possible permutations of the system, which the artist calls game. And this playful and almost scientific mechanism is tightly intertwined with the technique used to create those pieces.

For Terrazas, the reconciliation that can be established with manual work, or better the notion of craft, with its paused temporality and its thoroughness, is essential part of his practice as a visual artist. And it is precisely this artisanal character that distinguishes these objects —elaborated following the ancient Huichol weaving technique— in which its patterns are developed slowly by placing thread by thread on a Campeche wax covered surface. From the distance these tableaus can appear to be oil paintings, yet as we get closer, the lines from the weaves betray the uniformity and reveal a wavy and changing topography. The furry texture, the intense and vivid colors of the yarn contrast completely with the common concept of an art that is governed by a geometric principle, which also contributes to the sensation that what we see is a mandala. And, indeed, they somewhat resemble Buddhist circles, for they are representations where the cosmos appears in the shape of a circle inscribed inside a square formation.

The set of works presented in this exhibition allow the spectator to observe the different variations based on one and the same scheme. From one permutation to another the trace of the basic drawing remains visible, yet the configuration and order of certain elements shifts, and so does the use of colors, at times radically, to the point where they would appear to derive from different patterns. However, the transformation not only takes place within the overall appearance, but also inside each given structure: there are infinite mutations that emerge, even given a monochromatic color range. And this is not necessarily the result of Terrazas’ occasional use of different tones of one color, grey for instance, but rather of the thread’s texture that reflects the light in different shades, thus progressing from dark to bright. This, in the artist’s words, «generates an interesting quality, as the texture affects the general configuration of the image, which therefore appears in different shades while actually being the same red or blue.» This transforms the pieces into fields of an extremely changing nature, and it’s precisely this effect that provokes a rather long-lasting process of contemplation.

The series of acrylic paintings entitled Windows derive from a series of drawings that Terrazas executed in 1982, where he not only sketched their patterns and shapes but also the colors which thirty years later would be materialized. These images, which have a far more graphic and slick finish than the wool yarns, give the illusion of depth and delve into an isometric reflection, which offers the exploration of different possibilities of one and the same geometric idea: perspective.

There are two further bodies of work that complement the rather known plastic meditations by Terrazas in this exhibition. The first one, Cubes, comprises sculptural compositions combining a series of cross-linked cubic trusses made from tree branches inked with lively colors. Here, once again reappears the spirit of repetition: a scheme is developed, following a predetermined idea. Here, the basic configuration and the common denominator amongst the pieces is the cube, from which different structures are created, based on the grid that is produced when following a progressive growth principle.

And although it would seem that the sequence of photographs on view at the back room derive from an entirely different investigation, as they appear to have no relation to geometry, yet, in fact, they embrace the same serial spirit that dominates the rest of his work. These are a series of photographs that Eduardo Terrazas took in the 1970s while on strolls through downtown Mexico City, capturing the variety of curious shop window compositions. Be it underwear, mirrors, silverware, laces, or rasps, the salesmen staged arrangements that resemble the ones Terrazas created in Everyday Museum, where the repetition of a one and the same element is the constant. These photographs have not been shown to the public in a long time, making this an unsurpassable opportunity to approach another facet of Terrazas’ artistic investigation, where the changing nature of objects occupies the center of his aesthetic concerns.