The working group Maleza crítica reflects on the “biocultural” perspective under which the project Chapultepec: Naturaleza y Cultura is articulated to reveal its instrumentalization to the detriment of the environment and the struggles in defense of the territory existing throughout the basin of the Valley of Mexico. 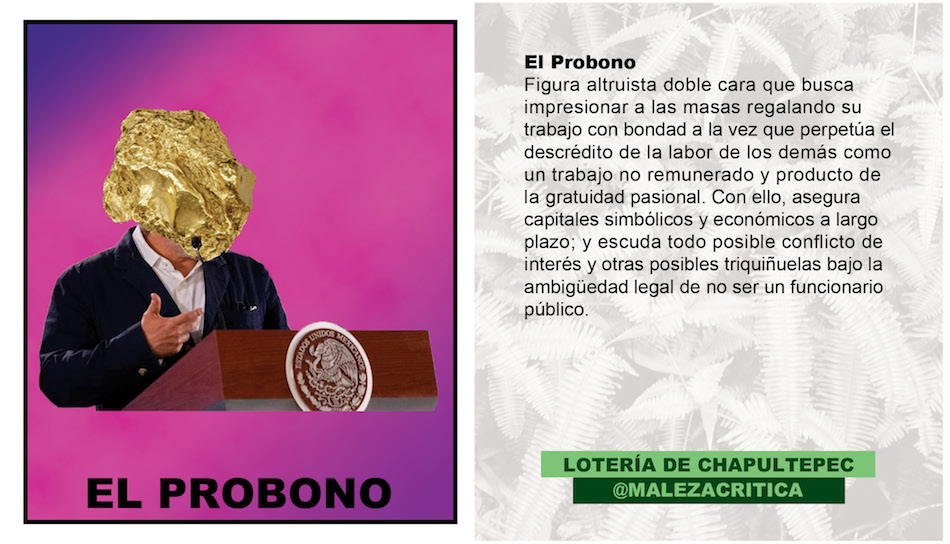 The word’s flower will not wilt.[1]

Over years of colonialism, we have observed the ravaging of communities in the name of domesticating nature and civilization throughout the entire American continent. In this territory occupied by so-called Mexico, said ravaging has been realized in part through the concession of spaces to public-private interests, camouflaging dispossession under the designation of “green spaces,” “ecological parks,” and “cultural projects.”

Chapultepec Forest is one of those coveted spaces—alongside Peñón de los Baños, the Estrella mount, and Guadalupe volcano—found in the midst of the valley that is now called Mexico City. This is where we weeds live amongst ahuehuetes, pines, zanates, and cacomixtles; we seek light through cracks in the sidewalk. Trampled and twisted, we evade being domesticated by the wishes for modernity and progress of a few who ignore the possibility of that which is different.

For a while now, every six revolutions around the Sun, governors build megaprojects to crown their term: be they airports, vehicular bridges, or suburban trains. Many are articulated through the appropriation of territories, resources, and the imposition of models to the detriment of community life, human and non-human. They misdirect funding, found institutions, generate infrastructure, and build angular rocks in order to perpetuate the power of the Nation-State and its affiliates. 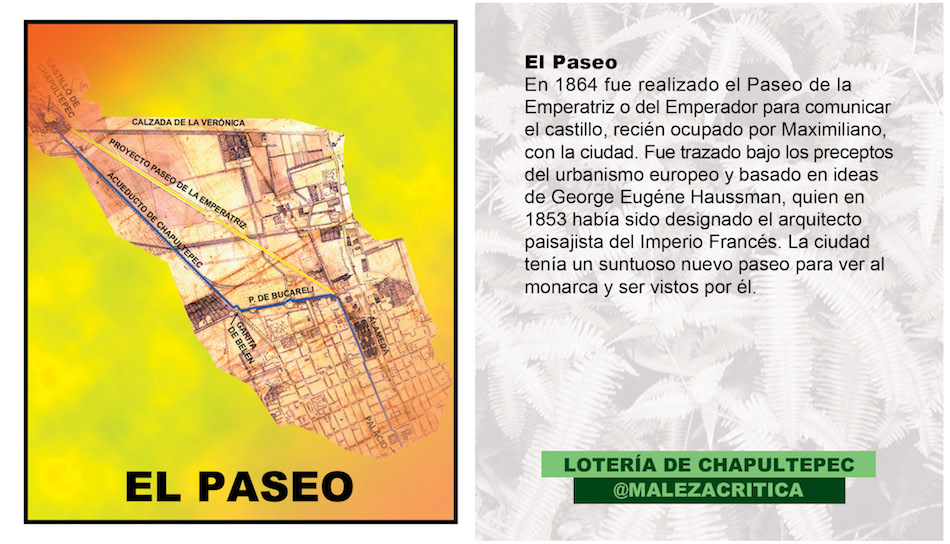 One of these megaprojects is currently underway in our forest. The power’s envious longing for the ahuehuete’s longevity is nothing new. Conquistadors, emperors, architects, and investors have traversed through this forest’s undergrowth. Up until recently, presidents and their families lived in this very forest, before the current citizen president named Andrés Manuel López Obraror broke with this tradition, appealing to decentralization and redistribution. And so, he decreed the transformation of the official presidential residence of Los Pinos into a public cultural center. Nonetheless, with this began the plan to convert the forest itself into infrastructure embedded in an ideological machinery that would allow another powerful man with the title of artist, called Gabriel Orozco, to walk through these geographies to reinforce the nationalist framework, and in turn, deliver them to real estate speculations and selfish personal interests.

The figure of the artist once again comes between state power and territorial conflict in Mexico City. When Orozco placed his sculpture Matrix Móvil in the megaproject Vasconcelos Library—(failled) cultural insignia of Vicente Fox’s panista administration (2000–2006)—he became the State’s official artist. Back then, he functioned as part of an apparatus of high-culture, legitimizing a Mexican State that on May 3, 2006, through force, murder, and sexual aggression, deprived farmers and peasants from their lands at San Salvador Atenco, at the basin of Lake Texcoco, with the pretense of building Mexico City’s New International Airport (NAICM, for its acronym in Spanish), the very project that was cancelled on January 3, 2019 after the beginning of the current administration.

Today, as conceptual director of the megaproject Chapultepec: Naturaleza y Cultura, Orozco functions once again as a figure who legitimizes the government in turn as well as ensuring different types of capital in his favor and those close to him. To this end, the Secretariat of Culture, under the direction of Alejandra Frausto, has allowed the allocation of one-quarter of the 2021 federal cultural budget to this very megaproject, articulated under a supposed biocultural lens. The use of this important concept for the defense of indigenous peoples is curious, as it accounts for the complex system of reciprocity and balance between them and the environment in the sense of nature-culture-territory complementarity. If we consider the latent land struggles in the Basin of Mexico, we will come across one that is particularly important for (biocultural) urbanizing projects in natural spaces: the struggle for territorial autonomy in the Lake Texcoco basin carried out by the Front of Peoples in Defense of the Land of San Salvador Atenco, which opposes the Lake Texcoco Ecological Park project. 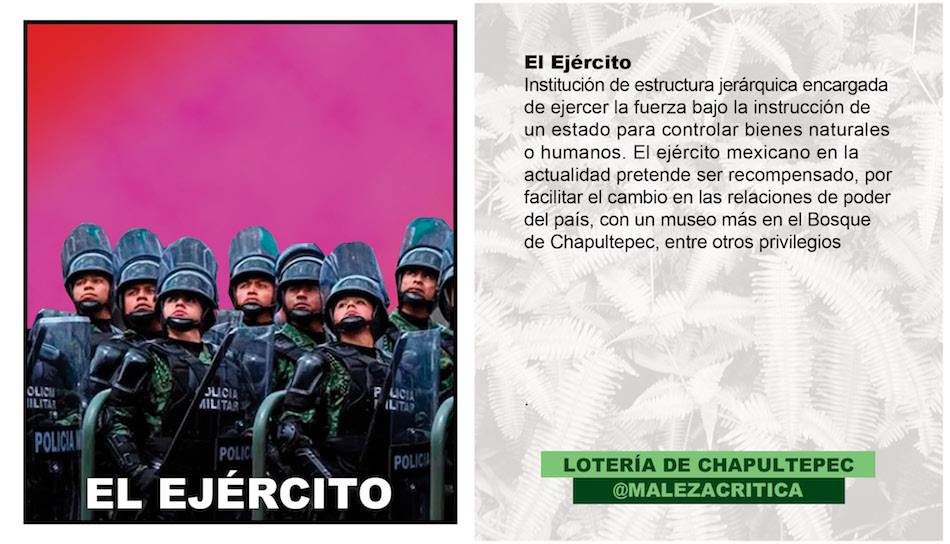 Because of this, we believe that Chapultepec: Naturaleza y Cultura is an experiment arising from the public-private sphere that seeks to deactivate the biocultural sensibility linked to land struggles with the end goal of instrumentalizing said concept in benefit the capitalist logic of AMLO’s administration.

For instance, this megaproject alarmingly allocates funding from the Secretariat of Culture’s budget without a plan for environmental management.[2] The Master Plan, currently shown by the artist and the Secretariat of Culture in the Los Pinos Cultural Center, proposes an apparent quest for sustainability, when in reality it would create a circuit to fast-track real estate development. They are undertaking ecocide through this public budget allocation, adding concrete, entertainment, and cultural animation under the guise of environmentalist discourse: populist eco-whitewashing. Biocultural premises, be they ecological parks or cultural projects, are nowadays in the Basin of Mexico one of the main ways of state domination over natural zones and the lifeforms that inhabit them: flora, fauna, natives. Specifications, lotification, registration.

This is evident since the initial articulation of permaculture as Chapultepec Project’s guiding principle, an antiquated and depoliticized mode of thought, easily manipulated in the interest of “green capitalism” as it overlooks the latent intersectionalities with sociocultural conflicts tied to land defense. From these precepts, we trace a megaproject that denies the importance of communal, horizontal processes detached from coloniality’s modernizing spirit, conceiving the biocultural as a simple encounter between the traditional and stagnant museistic spaces with “green spaces,” instead of a symbiotic interaction that facilitates regeneration, sustainability, and the reproduction of life. 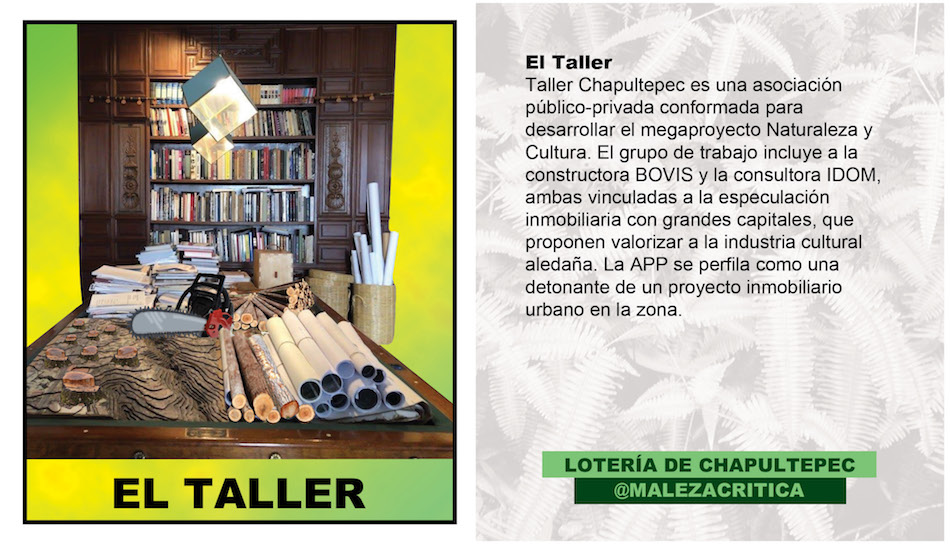 To accomplish said eco-whitewashing, Orozco, an artist represented by kurimanzutto gallery, has created a working group named Taller Chapultepec [Chapultepec Workshop]. Agents linked to real estate development and their collaborators are part of this group, aiming for Chapultepec to be a part of a cultural circuit that orbits around a Pavilion of Contemporary Art, where the artist seeks to exhibit his work and that of artists of his generation, as pointed out by Pablo Gaytán, expert in urban studies.

If the biocultural that goes beyond the logic of the State has the potential to articulate ethics of the commons—through building an understanding of what it implies to share a territory and the ecosystem that sustains it when facing a present conditioned by the climate crisis—the official cultural policies underscore the individualist sensibility that accompanies the sector’s instability. This seems to be the scheme that the Secretariat of Culture follows when, surrounded by an economic crisis due to the current pandemic, it ignores the demands made by art and cultural workers throughout the country for basic labor rights. In their place, the institution states that it accomplishes social justice through this project; when in reality, during work meetings, it strikes down on cultural workers’ collective organizing. For these reasons, the Secretariat of Culture and Gabriel Orozco become representative of nepotism, corruption, two-faced discourse, abuse of power, and demonstrate a lack of social compromise and solidarity with cultural workers in Mexico and the inhabitants of the Forest. 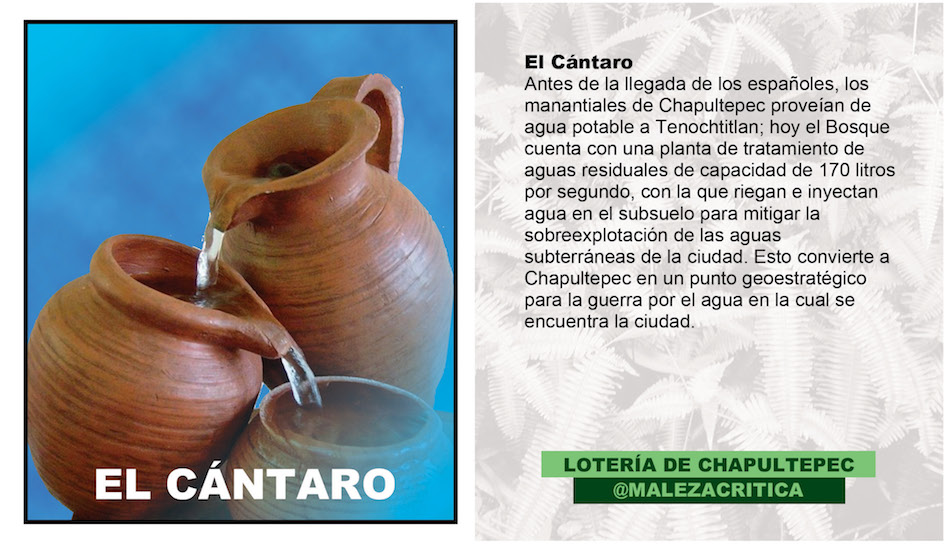 Now that high culture paints green the metropolitan circulation of capital, from the city that concentrates the country’s extractivist centralism, we denounce the project Chapultepec: Naturaleza y Cultura as it legitimizes the territorial and administrative violence that the Mexican State exerts under the fallacy of social justice.

How many artists are needed for the territorial reorganization of the Mexican state? How many pavilions to give social security to cultural workers? How many groups of officials to defuse civil organization efforts? The participation in the mirage of democratic dialogue will continue? But even more importantly, is there an ethical shudder when witnessing the abuses of power that are exercised against the struggles for the territories of the basin of Mexico?

May the collective power of creation and cooperation not die.