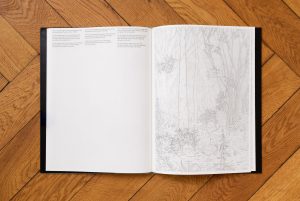 Iván Gallegos, a blacksmith with whom I worked many years ago in Cuenca, Ecuador once told me that when tools are worn out, one must cut off the damaged part of the edge in order to give it a new finish using emery. If the residues are made red-hot then cooled down in a glass of water, Iván explained, one can drink the history and strength of the tool, and utilize it as a remedy against any ill.

This practice had been widespread in the 16th and 17th centuries, mainly in Spain. At the time, this was generically called “tomar el acero” (drinking the steel), whether or not steel was the actual metal involved. Ingesting this remedy, or going directly to the countryside to drink from a natural spring of ferrous water, was recommended to counter the harmful effects of another peculiar practice: that of nibbling on búcaros.

It was believed that ingesting these clay pots had beautifying effects such as weight loss and skin brightening—at the time, this was a signifier of class by distinguishing from people who worked under the sun, or who possessed non-European features. Society from the period was quick to eroticize both practices, assigning double meaning to “tomar y pasear el acero” (drinking and strolling the steel), insinuating that these walks in the woods to look for a spring were also an opportunity to engage in brief sexual encounters. 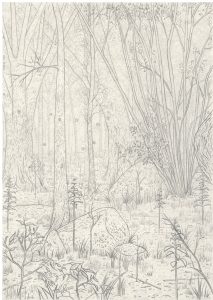 6
Large rock in the shape of a mountain with a pointed peak. It has the width of D3. The base is in the center of D3. The left side curves upward to the point located a little below and to the right of the center of C3. The right side slopes down to the right. It is a dark rock, you can only see one side. In front of it are a lot of small plants

7
Very slim pine tree. A mid-sized tree that grows just to the left, behind 6. The base is in the top third section of D2, almost at the center, a little to the right. It grows straight with a slight inclination to the left. Just as it crosses the horizontal B-C it slopes a little to the right and straightens again at the horizontal A-B. Its base has a diameter of about 20 cm and gets gradually thin- ner. It has small branches with almost imperceptible pine needles all along the stems and some thicker ones in the top part of B2.

9
The second biggest tree. The base is hidden behind 6. The right side coincides with the top of 6, the left side precisely with the vertical 2-3. The tree splits into two parts in the top section of C3. The left trunk grows in a slight slope towards A2, and has a thick branch at the center of B2, which grows towards the top part of A1. The right trunk grows fairly straight, with a thickness of about one quarter of the square, sloping to the left as it crosses the horizontal A-B. In the top part one can see some pine needles. The bark is rough and peeling off in places but it is less pronounced than that of 8. 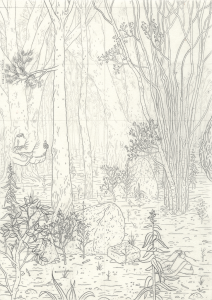 13:49 They sit down on the grass, gray sweatshirt rests their back on black jacket’s left side, the two embrace.

14:00 Black jacket lies on the back. Gray sweatshirt lies on top of them, legs slightly spread open. Hands on the butt. 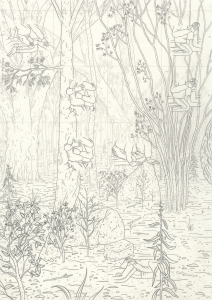 14:44 Still in the same position, they hold hands.

14:51 Gray sweatshirt is still on top of black jacket, they both place their hands on the grass and kiss. 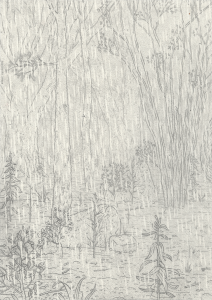