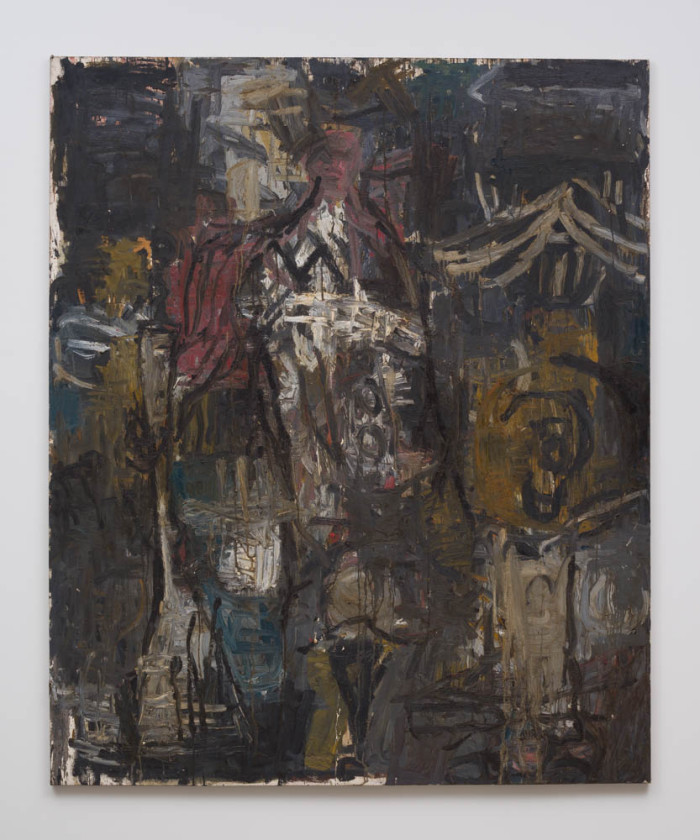 Pivô launches its new programme Fora da Caixa (‘Outside the Box’) with the group show Casa 7 no Pivô (‘Casa 7 at Pivô’). Eduardo Ortega’s curatorship focuses on the production of artists Paulo Monteiro, Nuno Ramos, Fábio Miguez, Carlito Carvalhosa and Rodrigo Andrade, from 1984 to 1985. The group turned house number 7 on a mews in Pinheiros, São Paulo, into a shared studio. The studio itself and the close interaction between the artists formed the basis for the creation of the collective Casa 7 (house number 7, in Portuguese). The exhibition covers the group’s high point in terms of recognition, during the final two years in which the artists shared the same working space.

The collective is still highly relevant in the Brazilian art scene. In the 1980s, its main proposition was the reaffirmation of painting. The young artists went through a process of public exercise as the works were simultaneously produced and exhibited; bravely opting to take the risk of showing both hits and misses. The paintings exposed their processes; the signs of making were printed on the final result. These artists were interested in an impulsive and cathartic form of painting, in opposition to the discursive art in vogue nowadays. The act of making came before the conceptualisation of the artwork. They were strongly influenced by German Neo-Expressionism as well as by North American painter Philip Guston.

A common ground marked the artists’ pieces, even though they were individually signed. The extent of this fusion encompasses not only the choice of techniques but also the exercise of a certain plastic language: in 1984, they all worked with enamel paint on craft paper, subsequently progressing onto oil on canvas the following year. One could say this was due to the affordability and accessibility of the materials at the time, but it was undeniably an intentional common decision. The exhibition at Pivô showcases two works (enamel paint on craft paper and oil on canvas) by each one of the five members.

Exhibiting the production of Casa 7 gains even more relevance when we consider the issue of authorship that is so recurring in contemporary practice.

Finally, it is worth highlighting the way Casa 7 claimed the reaffirmation of plaster painting, even under the pressure of a national artistic context that was heading in a different direction. These young artists were not proposing to unfold the Brazilian Constructivist project or responding to the tradition of Concrete or Neo-Concrete Art. They were not about maintaining mainstream conceptual and political practices but presenting an independent dimension and their own poetics.

As well as lodging the collective, Casa 7 also acted as a fertile meeting point for a whole generation of writers, filmmakers, musicians and other artists. It was one of the most important and prolific cultural hubs in the city of São Paulo in the 1980s, and its influence can still be felt today.

Casa 7
Casa 7 came into being in 1982, when a group of school friends decided to adopt an empty house owned by one of the member’s mothers as a studio. This was house number 7 in a mews on Cristiano Viana Street, in the neighbourhood of Pinheiros, in São Paulo. The original members were Rodrigo Andrade, Paulo Monteiro, Carlito Carvalhosa, Fábio Miguez and Antonio Malta, who left in 1983, when Nuno Ramos joined the group. From 1982 to 1985, the artists exhibited as a group at Paço das Artes, Museu de Arte Contemporânea da USP, Centro Cultural São Paulo, Galeria Subdistrito, Museu de Arte Moderna do Rio de Janeiro and the 18ª Bienal Internacional de São Paulo.

About Fora da Caixa
Fora da Caixa (‘Outside the Box’) programme revisits works and art projects that were exhibited in the past and are currently stored in public or private collections. The idea is to examine the artistic production of the last 50 years and reflect on its influence today by promoting possible interactions with the panorama of recent contemporary production.

For each edition, a different curator is invited to take charge of the research and exhibition of the historic pieces at Pivô. The programme enables these artworks to make contact again with viewers, who revisit them in a new context or experience them for the first time. Their exhibition alongside the most recent contemporary production at Pivô naturally results in intergenerational connections and we hope that any friction or synergies ultimately open up possibilities for research and critical thought.

About Pivô
Pivô, founded in 2012, is a non-profit cultural association that acts as a platform for artistic experimentation by artists, curators, theorists, students and everyone interested in developing research processes in this field. Located at Copan building and with an area of 3.500m2, the space proposes critical questioning within the visual arts, architecture, urbanism and other cultural areas, making a space available for exhibitions, investigations and exchange of artistic proposals in national and international realm. Its program is broad and contemplates shows, artistic residencies, interventions, courses, debates and lectures. In two years time the institution realized almost 30 projects, hosting more than 200 artists from 15 different countries, and also received 30 thousand visitors since its opening day.