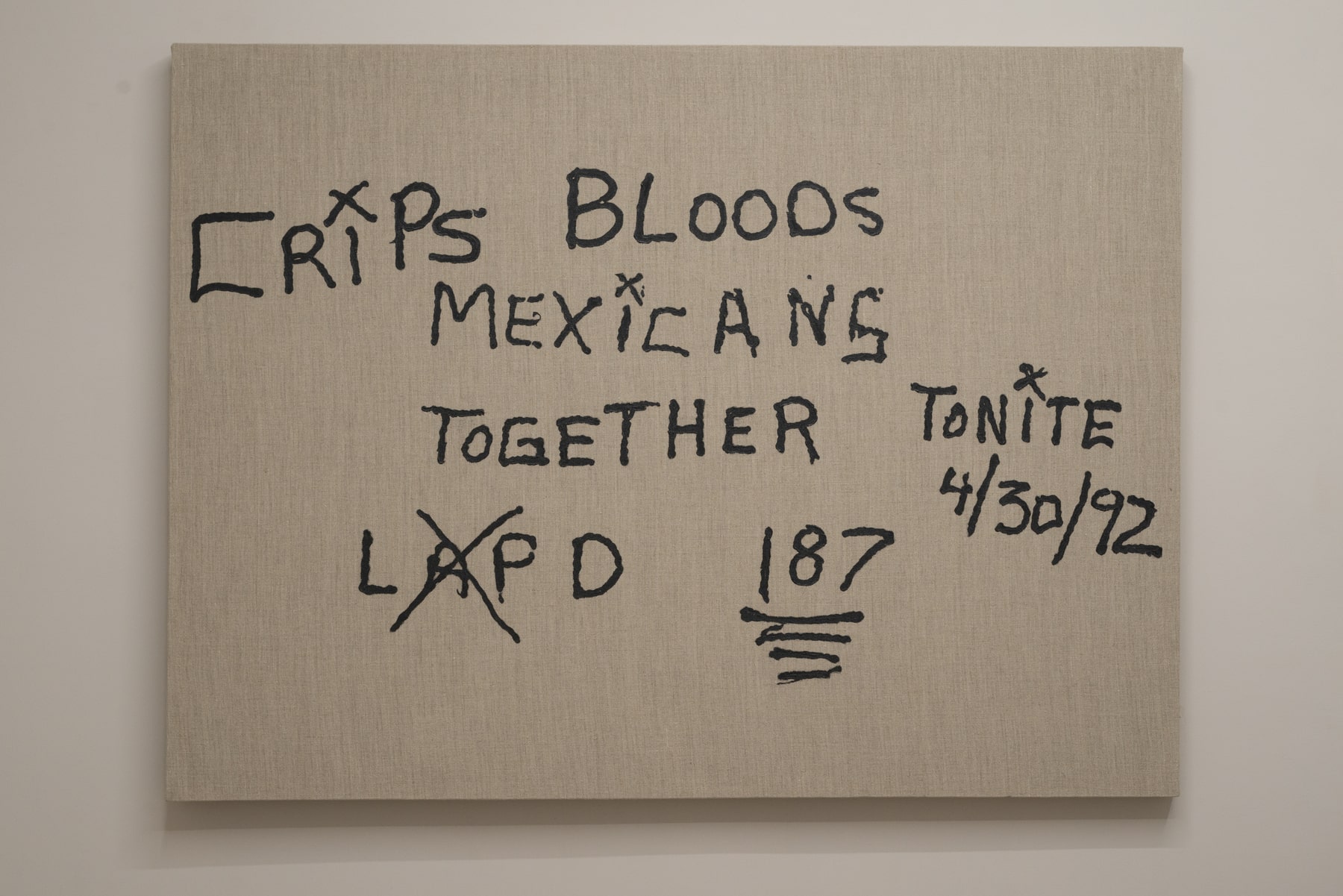 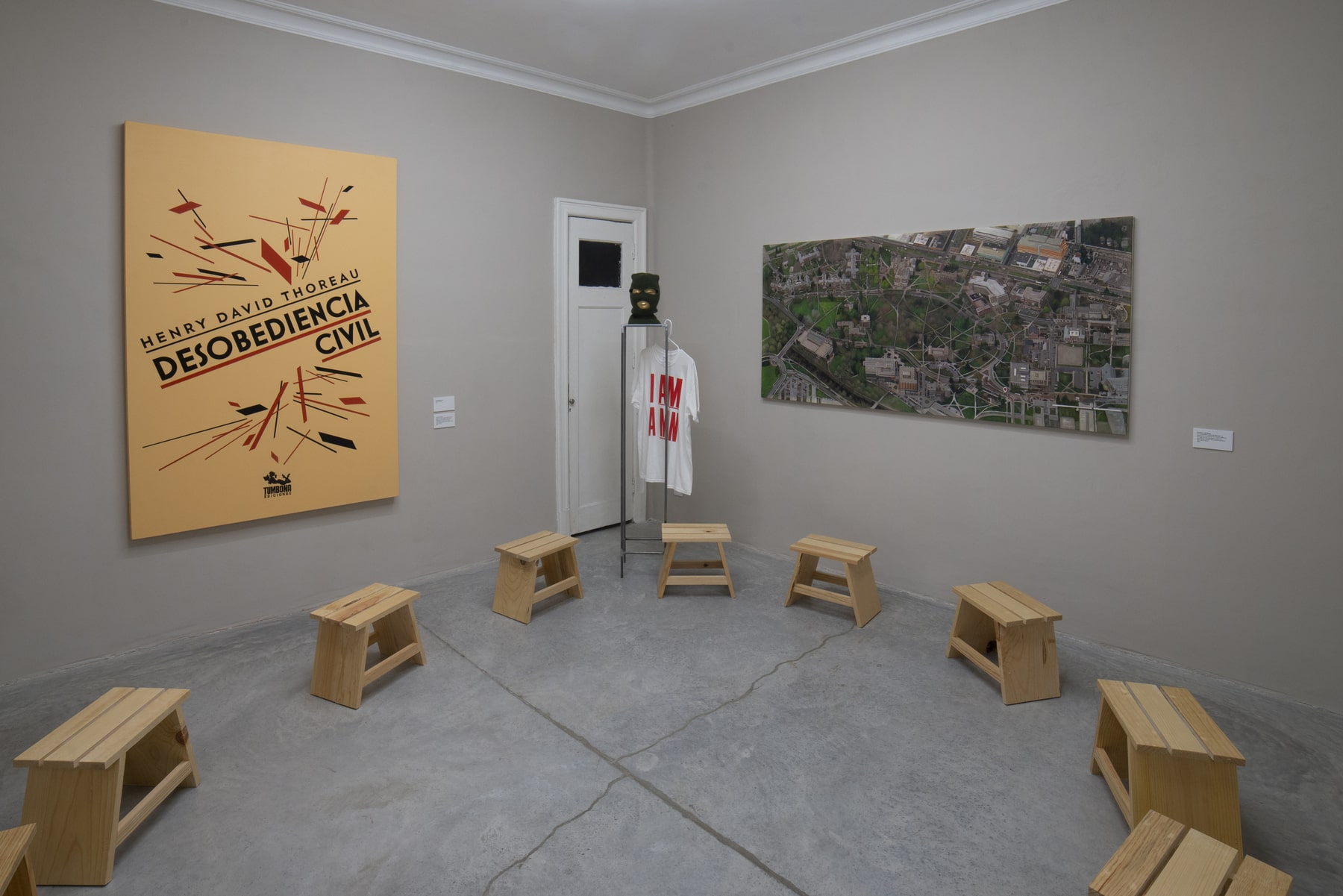 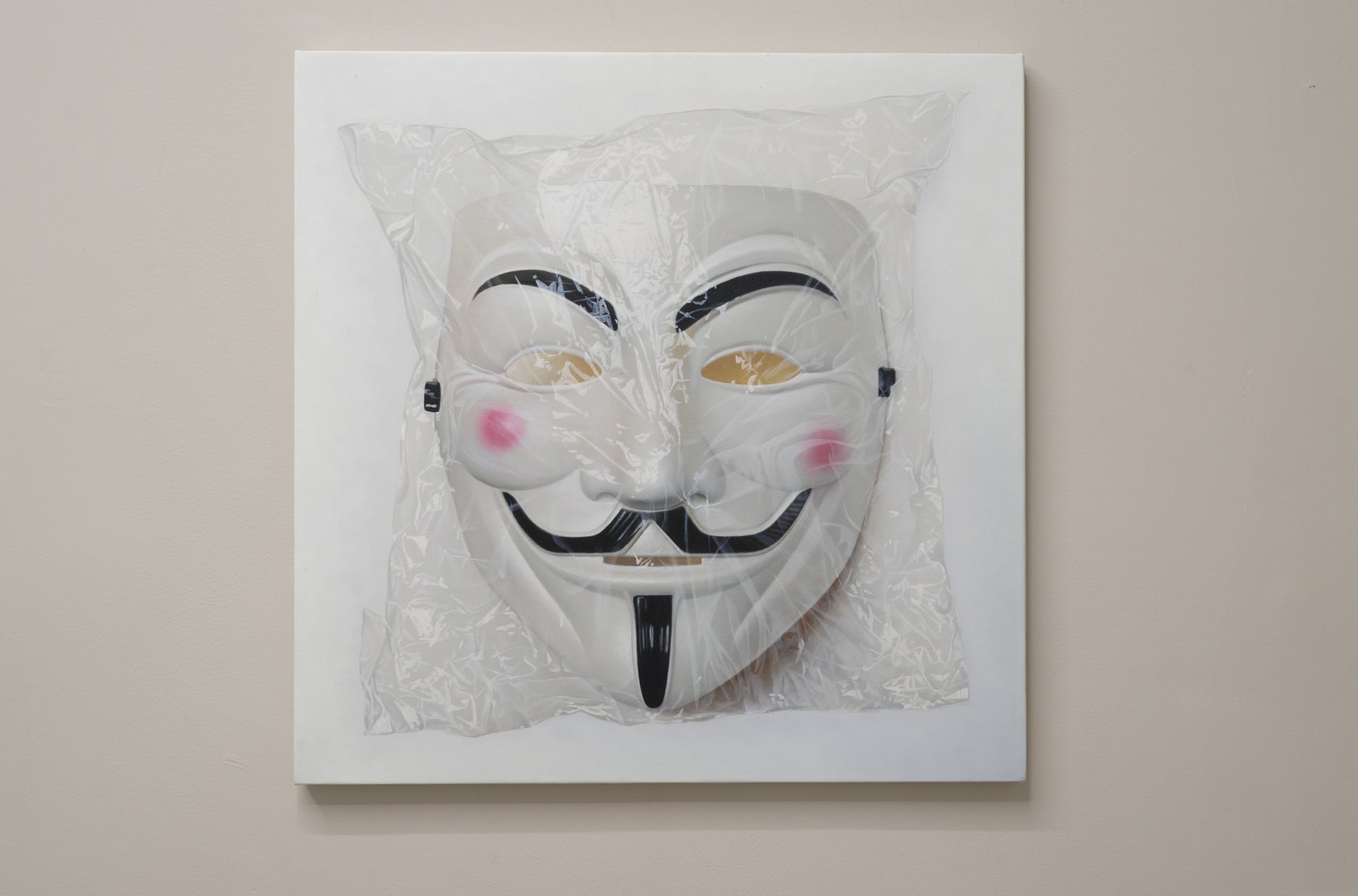 Daniela Elbahara celebrates the 1st anniversary of the gallery, Jim Ricks’ 1st solo show in the space (and his 1st ‘painting show’) as well as the 1st exhibition of 2020.

It is important to say that this ongoing series of work is a search for the democratic impulse rather than something complete or conclusive. The name of the show comes from the protest chant popularized in the anti World Trade Organization protests in Seattle in 1999. With this title, Ricks hopes to highlight the threshold between revolutionary fervor and mob rule; between high aspirations for humanity and mass-produced platitudes.

In This is What Democracy Looks Like, the Bay Area artist defines democracy as something “between the absolutely brutal and the absurdly banal”. Actually, all his work is derived from years of research, but also from chance encounters on the street or directly from the news and Amazon. The editorial process is one of careful selection and blatant appropriation. By selecting objects from the real world there is a certain unquestionability to them. They exist independently, like citations in a thesis or secondary sources on Wikipedia. Ricks actively seeks to collapse time and space by the careful selection of examples from different time periods, thus resisting the urge to make ‘current events’ work all too often misunderstood and accepted as political art, often highlighting disparity within the same culture and place.

Moreover, let us remind you that democracy comes from the combination of the Greek words demos and kratos… ‘District rule’ or ‘the rule of common people’, or even ‘strength of common people’. Today most people equate the word with Bourgeois Democracy or the chance to vote for professional politicians in a parliamentary system every few years.  Ricks’ definition refers to the organic formulations of people—something he believes is 100% instinctually natural and human—to create order and structure. Ricks posits that class-less self-organisation is innately human. Today this normally occurs outside of official systems of control. But he also looks to universalize concepts of equality to compliment the overtly political trajectory of the show.  Thus, democracy is revealed as something powerfully innate, but also popular, common, and universal in character. From independent political self-organization to market detritus of the international pop quotidian.

Ricks’ first ‘painting show’ is not purely painting and it’s not painting in the traditional sense. The artist fabricates the paintings like screen prints and frames source information like photographs—much like the Duchampian sense of making ‘selections’. This of course reflects his education, and equally his background as a graffiti artist, coming through numerous examples of graffiti directly included, but likewise through the prevalence of text in the show and a general ‘street’ sensibility. He strives for the gesamtkunstwerk (a work of art that makes use of all or many art forms), as a sort of art-historical game that includes bronze sculptural works, printmaking, murals, found objects, sound, and relational pieces.

Jim Ricks is a conceptual artist and received his education in equal parts: Montessori, Activist, Jesuit, 90’s Graffiti, Art School, and Artist-run. From San Francisco, he is naturalized Irish after arriving there for an MFA more than a 12 years ago. He currently lives in Mexico City.

Ricks’ has multiple practices. Ricks problematizes preconceptions about identity and value with a clever Marxist epistemology. His work is research driven, publicly engaged, and site specific. He believes creolization is beautiful and actively seeks out examples of the everyday. Projects include a Bouncy megalithic tomb, a global search for the Truth, drone-powered war rugs made in Afghanistan, a gable-end mural in Derry, Synchromaterialism, Art Fair interventions, creator of the Centro de Ontología Nacional (National Ontology Center) in Mexico City, the Museo Ambulante Sebastian, and a giant baseball in Cuba to collect autographs of the local residents.

"The Body Says, I Am a Fiesta: The Figure in Latin American Art" at Norton Museum of Art, Florida