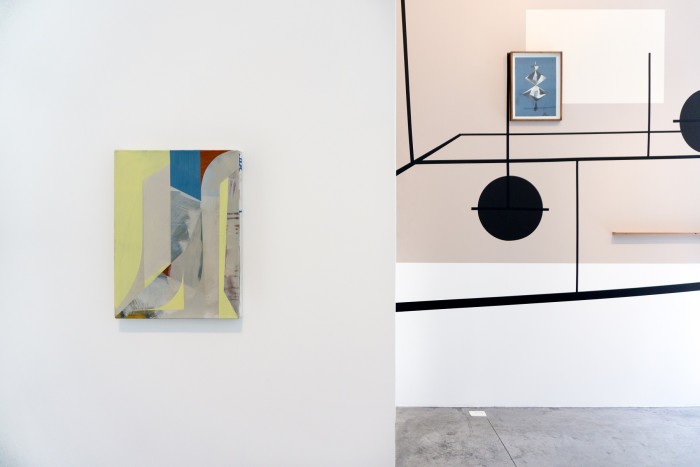 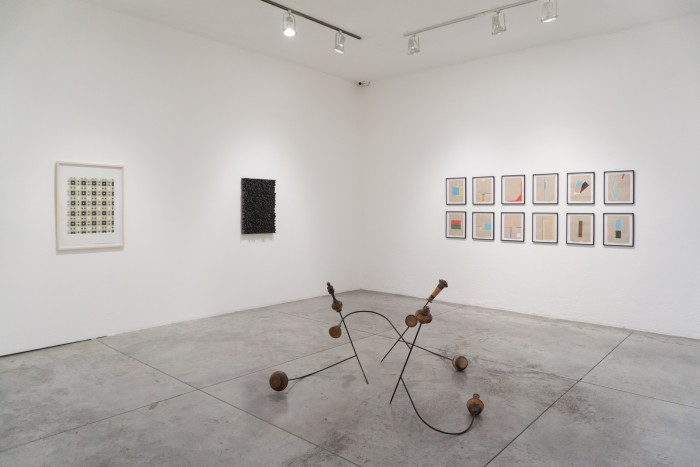 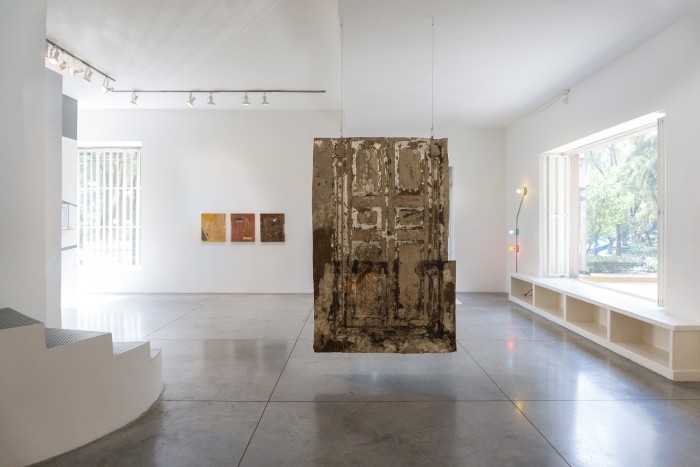 Abstraction 2 aims to capture the current state of contemporary abstraction, highlighting the differences and similarities displayed in the artistic practice of fifteen national and international artists.

Asger Dybvad Larsen – Denmark
Larsen works mainly on the physicality of the painting and the transformation of traditional painting materials. His works are both painterly and highly tactile and are identified most clearly in their dialectical conversation with the medium’s traditions and its classical structure.

Dannielle Tegeder – USA
For the past fifteen years, Tegeder has worked around abstraction. While her core work are paintings and drawings, she recently began to venture in large-scale installation, sculptural objects, video, sound, and animation.

Emilio Chapela – Mexico
He has an academic background on mathematics and studied Arts at Centro de la Imagen in México City. His work takes on technology and it’s effects on human communication from a philosophical and a critical point of view.

Fernando Carabajal – USA
Arriving from different reflections on the idea of production and artistic product, Carabajal develops a personal questionnaire to resolve through concepts characteristic of art, beyond supports or specific media. His work is a field of action for the spectator, an observatory, an inventory.

G.T. Pellizzi – Mexico
He studied philosophy at St. Johns College and graduated from The Channin School of Architecture at the Cooper Union. From 2001-2011, Pellizzi co-founded and has been involved in various art collectives, including The Bruce High Quality Foundation, with whom he has exhibited at the Whitney Museum of Art, PS1 MoMA, Centre Pompidou, PAC Murcia and the Fondazione Sandretto Re Rebaudengo.

Iosu Aramburu – Peru
His practice is centred on an exchange of glances between Peruvian modernity and its internal conflicts, and the romantic observation of ruins. He works with archival images and texts mainly about the modern architecture boom of the 1940s and 1950s in Latin America, as a clear example of the promise of a modernity that never fully arrives.

Jaime Gili – Venezuela
Throughout his career, Jaime Gili has developed the universal abstract language of the mid-20th Century into contemporary painting. More specifically, his work has been contextualised as a revision of Latin American abstraction, especially the Venezuelan optical and kinetic work of artists such as Carlos Cruz-Diez and Alejandro Otero, with an input from popular art and London’s energy.

José Carlos Martinat – Peru
His sources of inspiration are architecture and the urban milieu, human and cyberspace memories. His multimedia installations and sculptural assemblages incorporate a diversity of materials and strategies to alter preconceptions in regards to where things belong.

Justin Hibbs – England
Across his practice, Hibbs picks apart the mechanics of spatial perception and representation, drawing upon social, political and aesthetic agendas encoded within architectural structures. Much of his work is a renegotiation of the visual language and ideological legacies of modernism, seeking to establish and question relationships between real and idealised notions of space.

Károly Keserü – Hungary
In today’s fast-paced digital world, Keserü’s hand-made drawings and collages offer a direct link to his creative process. They involve a very laborious and almost obsessive process with meticulous attention to detail that reveals a strong meditative aspect which Keserü fuses with a genuine, almost innocent playfulness.

Mario Palacios Kaim – Mexico
An essential part of his artistic practice comes from experimentation and a persistent persuit of new possibilities and expresive capabilities of diverse materials, techniques and languajes. Printmaking, drawing, and collages made from natural-fiber papers interleaved with industrial elements give a rich, diverse and dinamic quality to his work.

Martín Pelenur – Uruguay
Martin Pelenur’s newest body of work manifests itself through his use of paint and other synthetic mediums on paper. Some forms are painted dense and heavy on the surface, thick with pigment, yet others take on fragile and crystalline structures that seem to emulate the delicate nature of inner thought.

Ricardo Rendón – Mexico
Gathering all kinds of materials and giving room to multiple formal solutions, media and work procedures, Ricardo Rendón’s work functions as a complex diary where the actions are recorded, documented and accumulated in the transformation and manipulation of the materials and the working place.

Saúl Sánchez – Colombia
His work questions different ideas related to the conceptual values of painting and the process conditions, proper of the different ways of representing images. Color interpretation, the boundaries between the visible and the invisible, and the relationship between the traditional forms and the contemporary practices of pictorial environment, are some of the main topics that structure his work.

Wolfram Ullrich – Germany
The works of Wolfram Ullrich bear eloquent witness to the vitality and complexity of Constructivist art in our own time. Tight angles and clearly defined forms dominate his compositions creating a new world of visual abstract imagery —a pictorial world that was its own subject and its own meaning, expressed as pure colour, pure form.