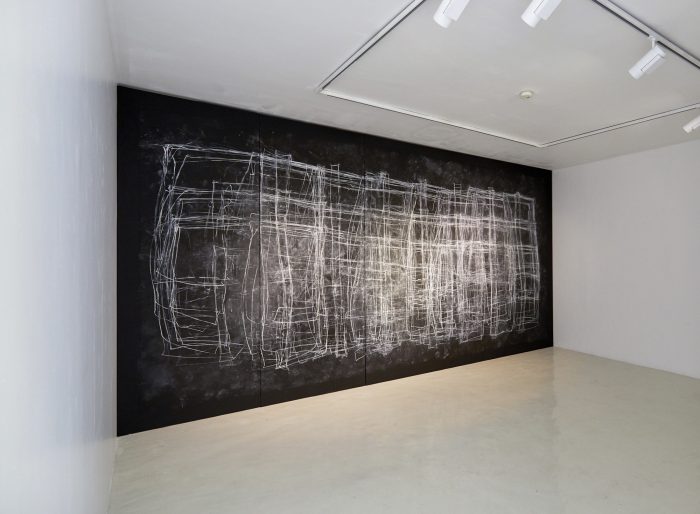 I. When remembering, something ceases to exist.
II. A life in remembrance is perfect; memory has a security that the now does not possess.
III. Our expectations and memory are our eternal sense of the now. They are the presence.
IV. What is remembered is eternal.

Yolanda Ceballos works with pyschogeographic exercises where she forms a dependance between her memory and the physical environment. She achieves this through the systematic observation between the cycles of reconstruction and destruction. Departing from an anthropometric uprising, she translates this observation into drawings and sculptures through physical proportions. These, in turn, cause her artworks to inhabit the space, combine multiple temporalities, appropriate a specific space and build a new memory of her surroundings.

Through this exhibition, the work of Gwladys Alonzo articulates two nearby opposing spaces: the terrace of Galería Hilario Galguera and El Búnker, a space for curatorial projects. One, located outdoors, recalls the organic and light, while the other, airtight, is confined to shadows. The bodies gathered here reveal the result of a mutation between the living and the inert. This sculptures emerge from the strange yet powerful associations generated from gray matter as a medium. Where the fascinating and the horrifying are inscribed, this exhibition seeks to create tension between the different ways in which sculptural monumentality and material fragility are conceived. As well as the relationships projected from peso as a monetary unit and as a measure of force exerted between bodies, hinting at the desire to crumble the impenetrable.

Gwladys Alonzo (France, 1990) grew up in a family of Polish and Sicilian immigrants in various rural and industrial areas of France. The wide-ranging geography and environments she experienced growing up fed her sensitivity to codes and identities of different cultures. From Latin America to Europe, the landscape she investigates continues to grow, a rural culture confronting an expanding universe on an international scale. Alonzo’s aesthetic and lexical vocabulary reveals confrontations between the natural and the industrial, which transcribe their extreme material qualities on her sculptures. She asserts mobility throughout her practice, “poaching the outside” with materials and forms from volcanoes to traffic jams, skyscrapers, and urban ruins. Alonzo’s approach to sculpture breaks the stereotypes of the masculine practice of sculpture where massiveness rhymes with perpetuity and immobility.

The gallery application for the arteBA 2020 Main Section is now open!