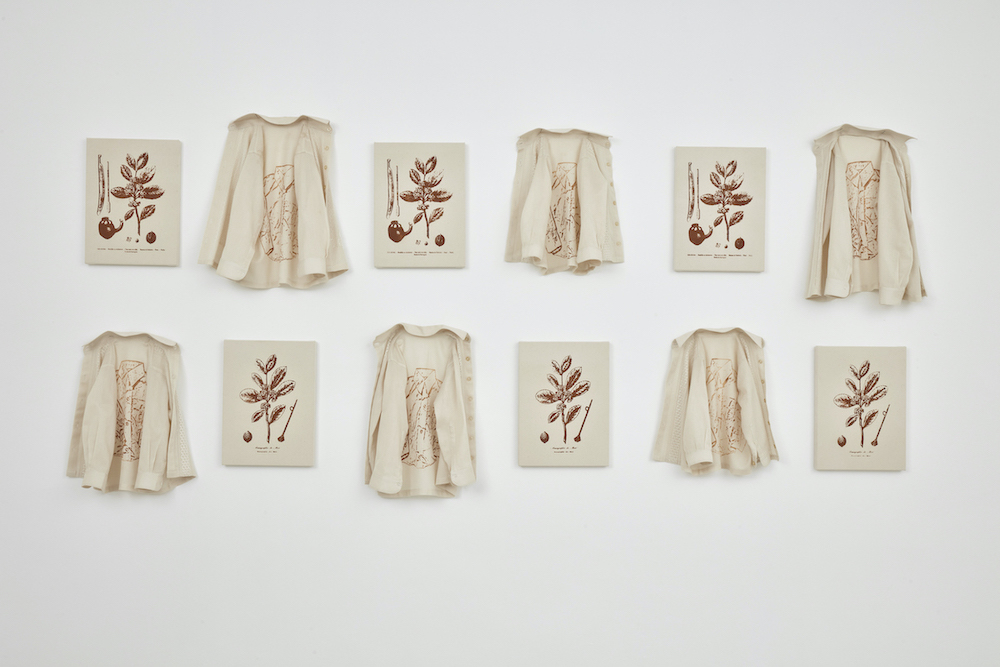 Mala Hierba / Yerba Mala is a two person show by Claudia Coca (Peru) and Claudia Casarino (Paraguay), presented at the Galería del Paseo/Lima. The exhibition brings together a series of works marked by decolonial thinking. Both artists coincide, briefly but intensely, in the use of American botanical iconography made by chroniclers of the eighteenth and nineteenth centuries.

Casarino exhibits two proposals that channel to the present unfortunate facts of the process of colonization of Paraguay, emphasizing the history of the mensú, the tareferos that, in the same region, gathered the leaves of yerba mate in extreme conditions of exploitation. The artist invokes the memory of Paraguay through cotton shirts, made with the traditional technique of ao po’i, which carry images of other shirts silk-screened with red earth from the Upper Paraná dissolved in water. Casarino suggests to imagine other regimes of coexistence presenting us in a video the crushing of images of French and English gardens, iconic models of European gardening.

Coca also incorporates the image of the botanical gardens in two of her works; and, reveals them as they replicate the predatory and discriminatory mechanism of colonial domination. In one of the them, the artist reverses the sense of naturalistic drawing to draw in pencil specimens of South American plants in an exercise that parodies the naturalistic record of scientific taxonomies. In the second work, Coca alters the beautiful and meticulous image of the botanical specimens; she fragments paintings of traveling chroniclers from the West by copying and separating them into small, pretentiously academic segments: miniatures of fruits from the exotic earth.

In the video Carabela, Coca links images and texts from different fields. The work focuses on the disturbing figure of the aguaviva, false jellyfish or caravel, a colony composed of five associates whose interaction keeps it alive. Its appearance is similar to that of the boat that gives it its name; its poisonous touch makes it fearsome in marine waters. Thus, caravel connotes a colonial organism, predator, whose appearance and name associate it with the European conquest, as well as an unclassifiable entity, slippery of schemes, halfway between different natural kingdoms.

Galería del Paseo/Lima is open to the public from Monday through Saturday, 2 pm to 6 pm, at Gral. Borgoño 770, Miraflores. The exhibition Mala Hierba / Yerba Mala will open virtually on Monday, October 26 at 6 pm, and can be visited in person from October 27 to November 28, or through our new Viewing Room. For appointments at other times, please write to lima@galeriadelpaseo.com.

Visual artist, she graduated from the Escuela Nacional de Bellas Artes del Perú and the Bachillerato Complementario en Arte at the Universidad Mayor de San Marcos. Between 2011 and 2018 she was Academic Director of the School of Visual Arts Corriente Alterna, Peru. She is currently a member of the Advisory Council for the Bicentennial of Peru 2021.

She has participated in the BienalSur (Argentina, Peru and Bolivia, 2019); Trienal de Chile, at the Museo de Arte Contemporáneo de Santiago (2009); and the III Bienal de MERCOSUR, Porto Alegre, Brazil (2001).

She has received the Luces Prize for the best retrospective exhibition, for his anthological exhibition Mestiza (MAC-Lima, 2014); the Second Prize in the National Painting Competition of the Central Reserve Bank of Peru (2009); and a scholarship from the Third Human Rights Colloquium in Sao Paulo, Brazil (2003). Her work is part of several collections: Pérez Art Museum (Miami); Museum of the Central Reserve Bank of Peru (Lima); Museum of Contemporary Art of Lima (MAC-Lima); Museum of Art of the Universidad Nacional Mayor de San Marcos (Lima); in addition to private collections in Peru and abroad. She has been a founding member of the Colectivo Sociedad Civil. Her work has been widely cited and published in texts on art and social studies.

She studied Visual Arts at the ISA of the National University of Asuncion. Since 2006 she is the director of the Migliorisi Foundation, an institution devoted to the conservation, promotion and dissemination of art and design.