Writer Javier Payeras revises the conformation of the poetic action in Guatemala, proposing the intersection between text and artistic gesture as an attitude of resistance to face the complex situation of the Guatemalan: their isolation, fragmentation, memory, and cultural contradictions. 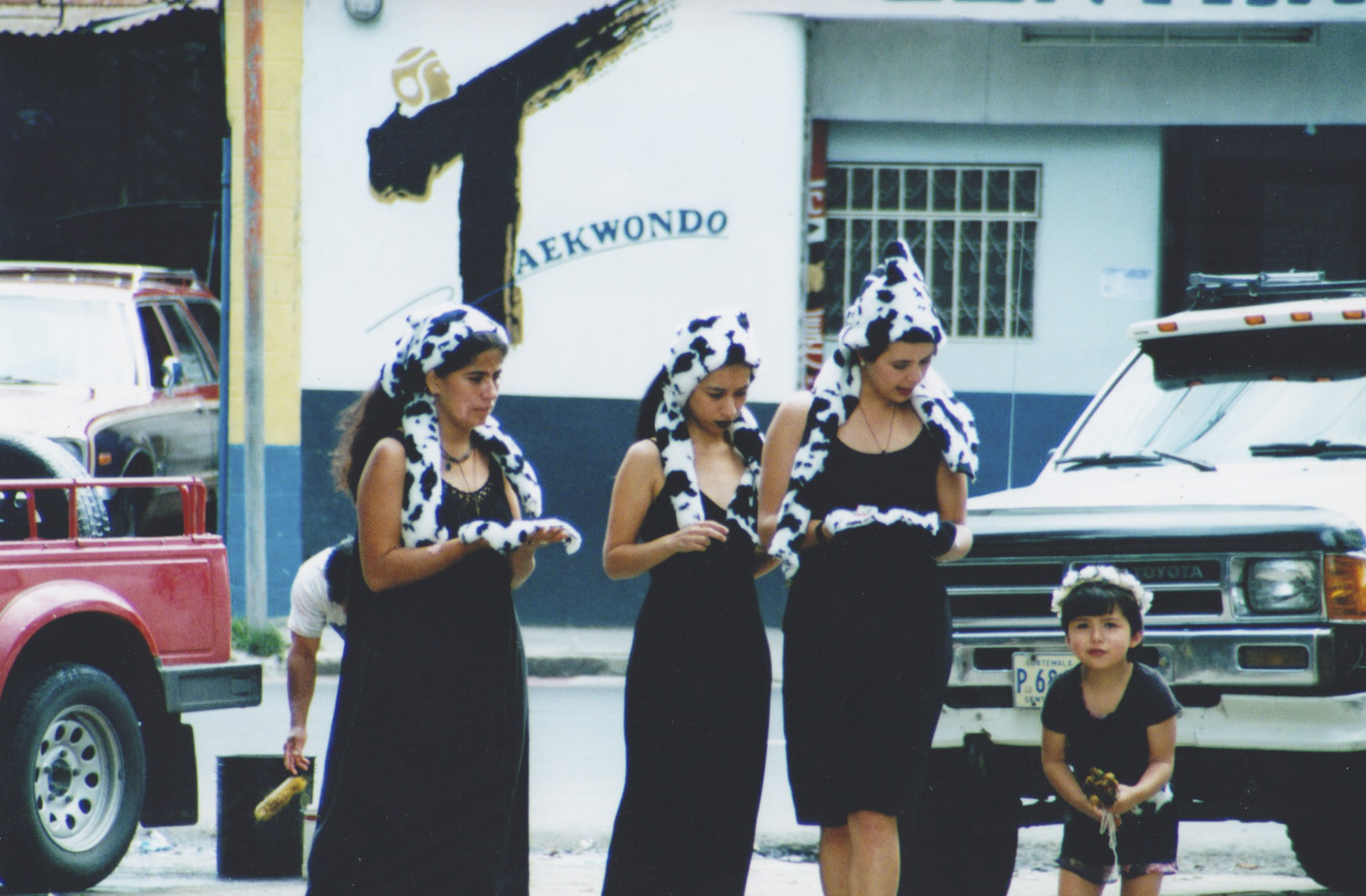 Thus, they spoke, consulting among themselves and meditating; they agreed, they united their words and their thoughts.
—Popol Vuh, First Chapter

As a writer, I find it difficult to separate text from the artistic gesture. I contemplate an extension of syntax, a simulation ascribed to words. We are boxes of words that sooner or later are going to open up, creating an outlet through which the voices that have accumulated inside will escape.

Guatemalan literature has made that tension between silence and fury visible. On the one hand, we have a surplus of silence. A silence that remains in the epidermis, but that never permeates the depths of our sensibility. Perhaps because the foundations of the education we receive were established on the premise that morality is far above any ethical position that we might be presented with as individuals and not as mere reproducers of a socially-correct discourse, where our judgments on issues like family, politics, and nationalist symbolism are unquestionable. Thus, the enormous social and political ruptures have resulted in a fragmented country, very much given to censorship and apathy. The very harsh conditions of survival and the scars of a history laden with impunity, discrimination, and violence have been decisive in causing the creative crisis to oppose the status quo that simplifies issues such as historical memory or that legitimizes racism, machismo, and violence. That is why in those times when such conflicts have intensified, the artist’s immediate response has been to create an incisive and critical work that opens the door for future generations to continue inhabiting the space of reflection that it proposes.

The poetic act in Guatemala has taken shape outside of text since the sixties. It seems to me that it is a continuous discourse—a text that remains inconclusive and which, since then, has not stopped defining itself. Literary proposals accompanied the work of visual artists who at that time would explore all the possibilities of a contemporary language that would delineate the complex situation the Guatemalan people were facing, before themselves and before their own isolation from the world.

The presence of key artists such as Roberto Cabrera, Margarita Azurdia, and Luis Díaz began to define the speech that emerged after the revolutionary dream was thwarted and authoritarianism returned. In the midst of the armed struggle and the over-ideologization of art—both by the Left and the Right—these artists always maintained a position that pointed towards “Guatemalan individuality” without, however, being less belligerent than those who, from the beginning, assumed an unnuanced political slogan, often simplified in a language free of contradictions. Cabrera, Azurdia, and Díaz, along with the Grupo Vértebra [1], began the search for that speech as a form of resistance; hence, it is possible to draw a parallel line between the Grupo Vértebra and the group Nuevo Signo [2] or the work of Marco Antonio Flores regarding the boiling up of a revolution imagined from culture [3] and not necessarily from weapons or machista-militarist extremists. 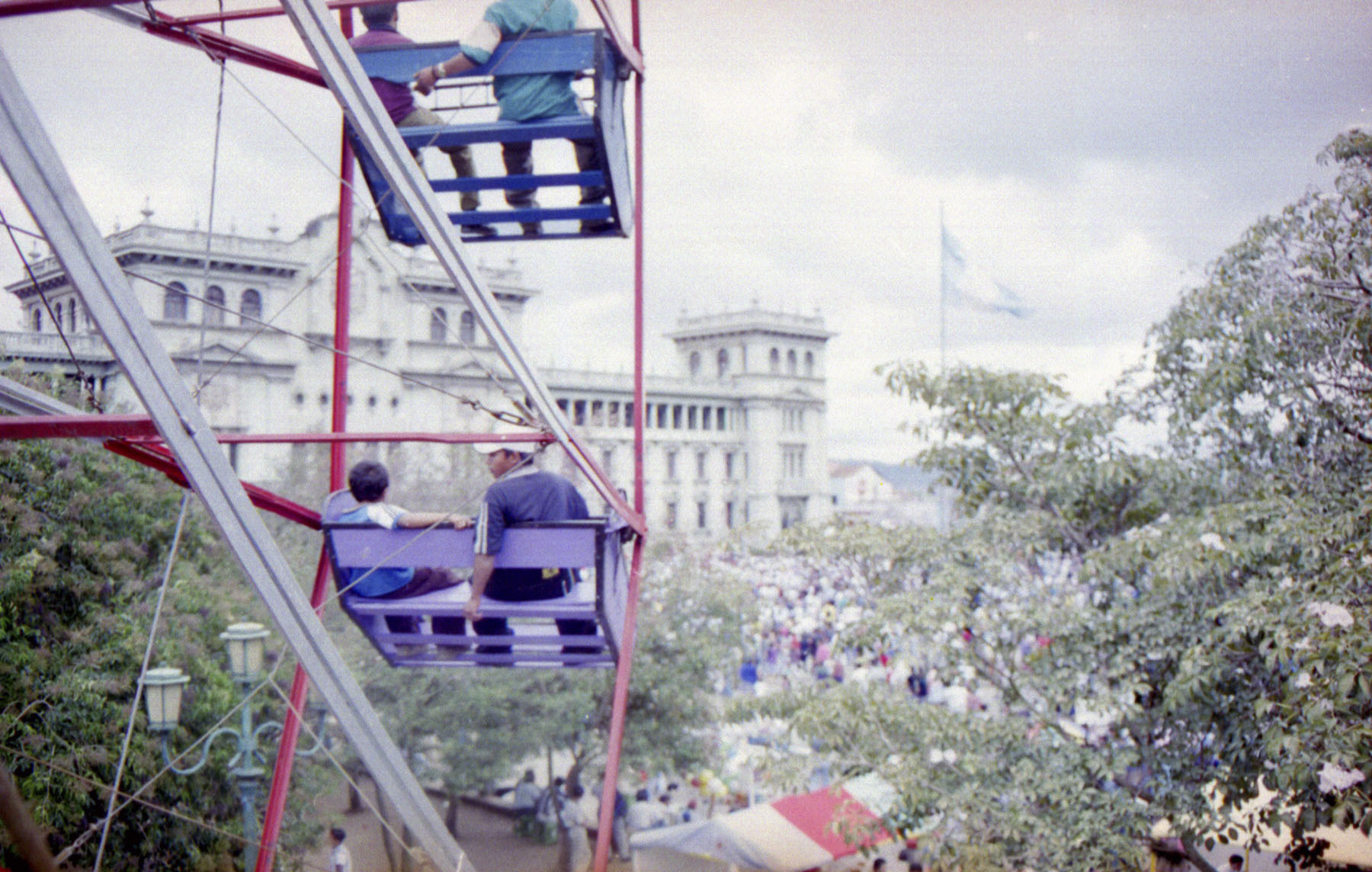 The continuity between these speeches has poetics that were exposed in the multiplicity that would later emerge around the seventies. The resistance and confrontation of the classes are transformed into a critique of the masculinized revolutionary paradigms supported by an—obviously—absolutely macho military rhetoric. The rupture comes with the literature that, whether coming out of the academy or a cultural organization, writers such as Luz Méndez, Margarita Carrera, Ana María Rodas, Carmen Matute, and Delia Quiñónez established. The influence of Rodas was a fundamental supplement to the proposals entrenched within a new figurative redefinition of those cultural contradictions that began to be emphasized after the late seventies and that would have an important proximity to what would later become the Imaginaria [4] group. This group burst onto the scene in the eighties and by the nineties its fundamental contribution was to break open the margins and establish a contemporary vocabulary based in visual interpretation, which, until then, had only been a means of liberating a “repressed vanguard” [5] or a fragmented and intuitive experimentation.

Speech—a term that immediately recalls the Popol Vuh when it speaks of the newly created beings, who ask to be masters of their own expression in order to define themselves—is a current that makes visible the need for diverse expressions that, like a kind of kaleidoscopic construction, resist assimilation to an identity imposed by power. It is an opening that rescues direct aspects of sensory and daily experience that can be defined or posed from within society and from outside the different stigmas imposed by stereotypes and negations, recurrent positions within social schemes where issues, such as abuse and exclusion, have become normalized within a culture of suppression that the present authoritarian government imposes—and why shouldn’t we say it—not only in politics but in all fields, even that of culture. 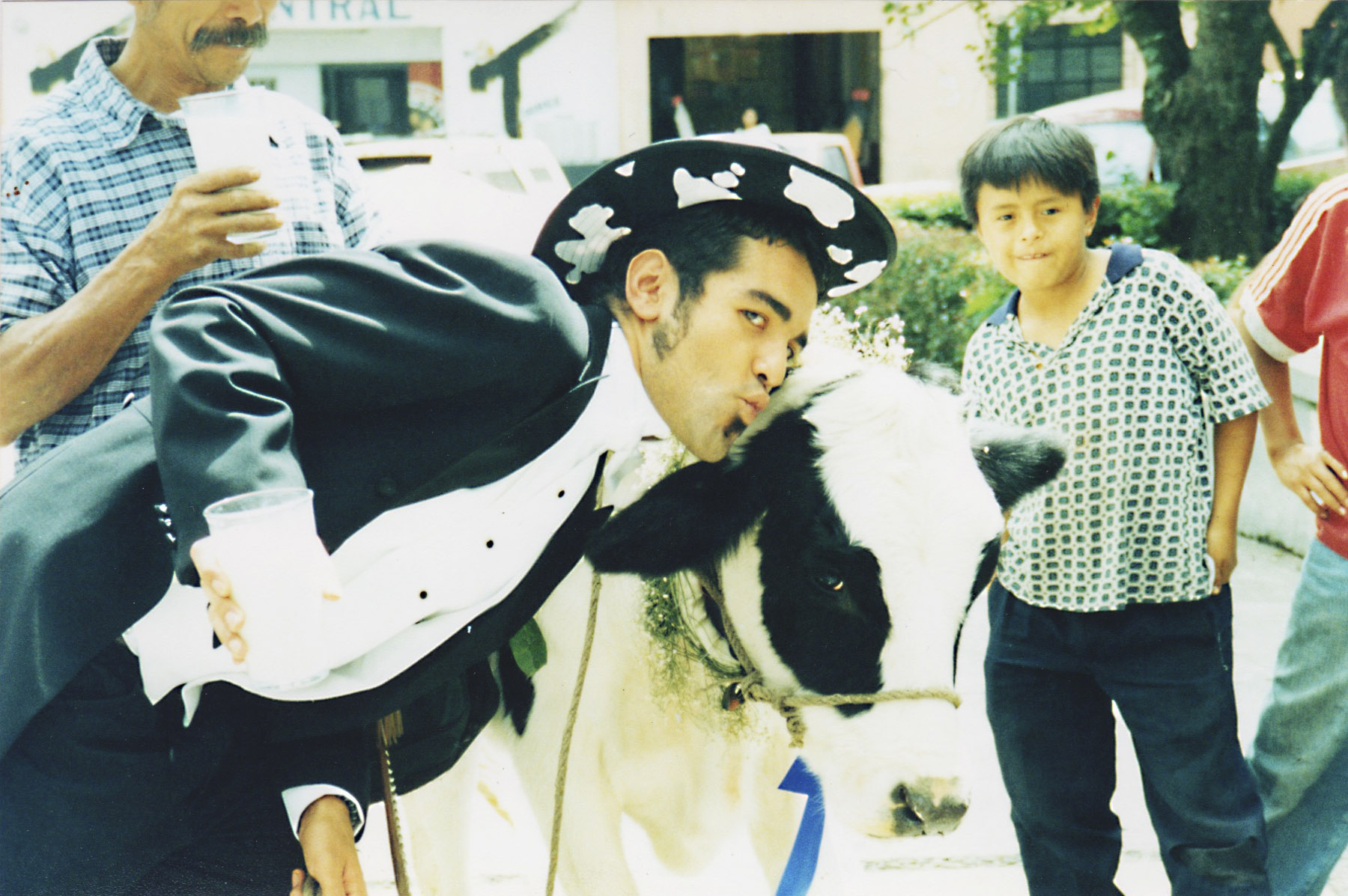 The Octubreazul Festival (2000) was a continuous display of attitudes towards official art and came to be an epilogue to the two editions of the Festival de Arte Urbano (Urban Art Festival) that took place in the historic center of Guatemala City in 1998 and 1999. There, you could see many of the art proposals that began in the sixties with the Grupo Vértebra, but from the perspective of a younger generation that awoke to the death count and pain that the armed conflict brought and that arose with the signing of the peace agreements between the Unidad Revolucionaria Nacional Guatemalteca (URNG) and the government of Guatemala. Thus, in my opinion, the creation of Octubreazul actually began 30 years before it took place.

Taking as a point of reference the splitting of the poetics that supported the movement [6], it is easy to find clear points of connection in the relationship between poetry and the city, a relationship that has been clearly illustrated in that strange mythology that gives life to the character of the city in contemporary Guatemalan literature. The city is a crossable space, loaded with symbols that immediately refer to a characterization of urban spaces as sites where resistance is designated—for example, the peasant marches that aimed for the city or the demonstrations and protests of all kinds that took over the central plaza or the historic center—, in addition to the underground atmosphere, full of urban tribes such as the rock, literary, and experimental art scenes that flourished there at the end of the nineties. The city was occupied as a gallery, a stage, and a space for dialogue.

The city is a crossable space, loaded with symbols that immediately refer to a characterization of urban spaces as sites where resistance is designated.

Among the many activities that took place in Octubreazul, I want to return to three pieces that I think are excellent examples of that poetics of the city as a character and symbol: Benvenuto Chavajay’s Homenaje a Guatemala, José Osorio’s 44 revoluciones por minuto, and Alejandro Marré’s El chonguengue de Doctor Virus y la Fabulosa.

Chavajay intervened the city via a long walk in which he connected the points that delimit it. Walking the city is an act of recognition and a way to get lost in the invisibility and anonymity in which millions of people from the countryside, who come to the capital in search of job opportunities, are immersed. I would dare to say that with this symbolic act, the most effective artistic and cultural intervention of the first decade of the twenty-first century begins: the incursion of the most invisible regions into Guatemalan contemporary art, with artists living in apartments surrounding the capital city, who helped places like San Pedro La Laguna (Sololá) or San Juan Comalapa (Chimaltenango) to become true centers of exploration of an art anchored in a crude observation of the popular—the very opposite of the folklorism or the regurgitated sociological and superficial paraphernalia of contemporary art with internationalist pretensions. 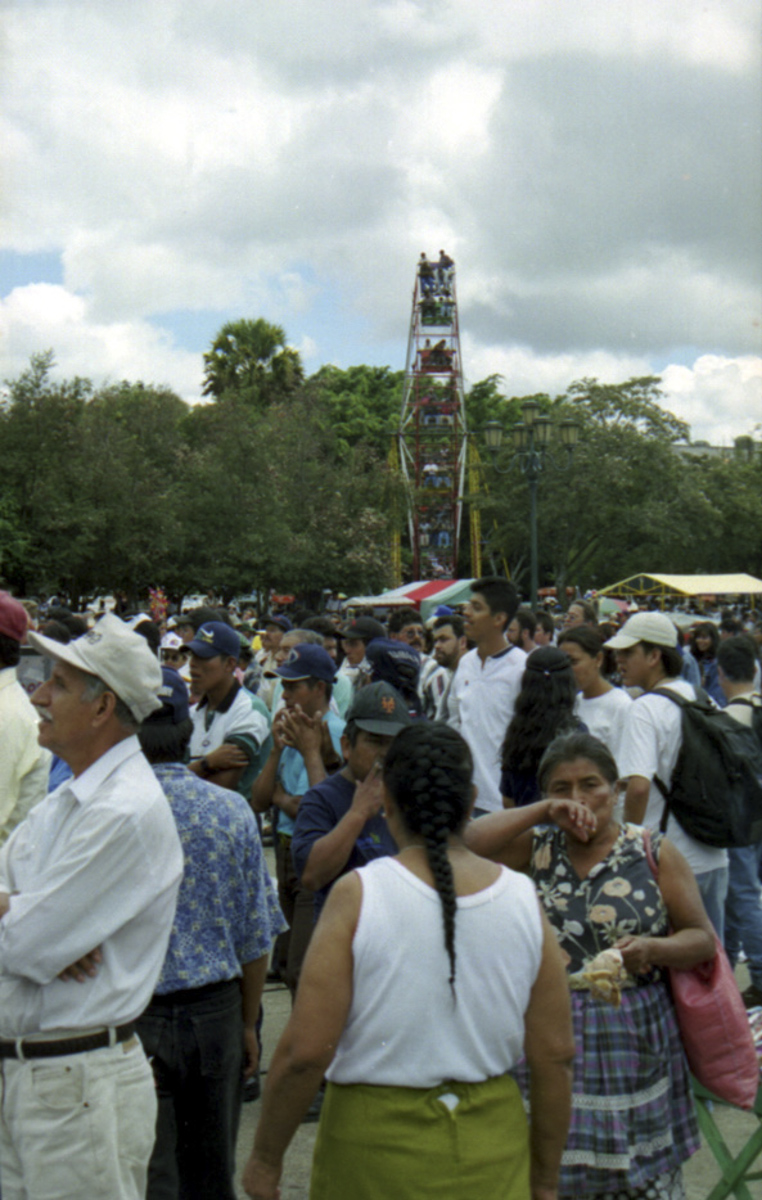 44 revoluciones por minuto is the title of an intervention conducted by José Osorio (manager and organizer of the Arte Urbano team), which involved renting a Ferris wheel, known as a Rueda de Chicago (A Chicago Wheel) in Guatemala, and installing it in front of the Palacio Nacional, where it ran for free throughout the day, on October 20, the day of the Revolution. The piece, discreetly provocative, uses the metaphor of “vertigo,” relating it to the political changes that have taken place in Guatemala since 1944, beginning with the election of Juan José Arévalo’s progressive government and the hope with which he was embraced and moving through the disaster that occurred when the revolutionary government was overthrown, the guerilla armies formed, and the state terrorism that lasted 36 years began.

Finally, I quote Alejandro Marré’s El chonguengue del Doctor Virus y la Fabulosa, a very humorous performance in which the artist conducts a civil marriage with a Jersey cow. The allusion contains a kind of candid genius that turns on the fact that Guatemala City was settled on land that was originally called Valle de las Vacas (Valley of the Cows). In a symbolic act, the poet and conceptual artist Alejandro Marré gets involved with one of the most recurrent symbols of the city’s identity through a ceremony of absolute misanthropy.

On the other hand, it is worth mentioning the important participation of female writers and artists, such as Regina José Galindo, Sandra Monterroso, and María Adela Díaz in Octubreazul. Here, I would like to highlight that, although they are very different artists, their work identifies an opening in the monopoly of masculine speech; they broke through with actions that mingled with the symbolic representation Guatemalan men impose on women by associating them directly with a mere idealization, stripped of desires or autonomy. In the case of Galindo and Díaz, I see points of immediate connection with the position that Margarita Azurdia and Ana María Rodas have defended since the sixties in the face of that quiet and passive revolution that Guatemalan women were expected to sustain from a position of feminine subalternity. In this case, the city is not the stage, but the poetics of the female body exposed in its nakedness and apparent vulnerability, the cartography of existence itself and its conditioning factors in a society where it is subject to abuse, nullification, and commercial exploitation. 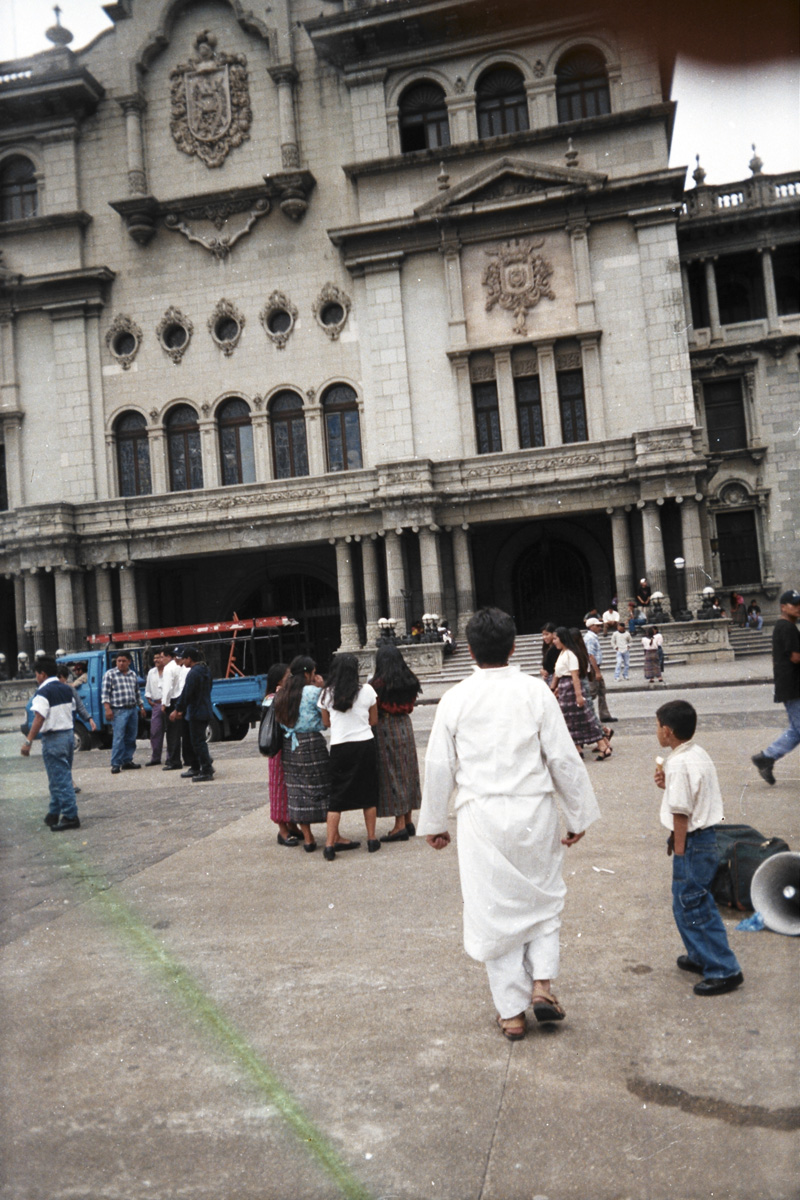 To date, all these speeches give us certain clarity about accumulated poetics— a poetics of the body, a poetics of the environment or of survival, and a position on the visibility of art itself—in a country where this type of situation borders on politics but always traces a line of escape between individual existence and the imposed living conditions in a time and place as complicated as Guatemala. It is not uncommon for many critiques to come from the groups that legitimate that same status quo that holds up the same colonial paradigms of the colony.

Enabling multiple expressions to emerge is the only thing that will move us away from this anti-dialectical exercise and that one-dimensional vision that exists in culture.

An attitude of resistance that is very alien to the official passiveness (euphemized as “artistic office”) and that is nothing more than a decorative exercise that keeps hidden the possibility of generating profound changes within art institutions, spaces of creation, and outreach to new audiences for art.

What is Writing, Then, When it Becomes Body?