… far away, over there, the ocean: Reflections on Trauma and Resistance in Vandy Rattana’s «Monologue Trilogy» 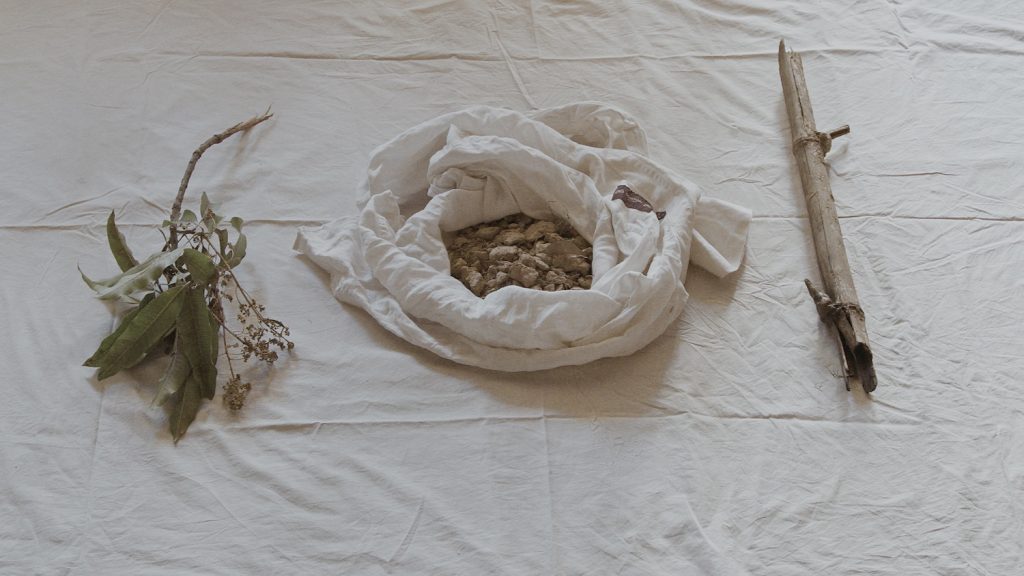 Time passes; a day has gone. A year arrives; the seasons evolve. Human activities and the flow of time form an endless history. A city is growing. A long road is laid to connect lives and confusion. Industry makes its way into a time of choice and change. The sound of choice and change are on run to compete against the self. – Vandy Rattana[1]

These words, seemingly timeless musings, were penned by Khmer[2] artist Vandy Rattana as part of an early script for the third film of his Monologue Trilogy, … far away, over there, the ocean (forthwith referred to as … far away).[3] The trilogy uses reflections on historical facts and fiction and speculative reality[4] set against a backdrop of rural Cambodia to locate and observe the potential of embodied trauma as a method for moving through space and time. The films take as their starting point the truths and speculations about the Khmer Rouge genocide and contemplate the legacy it has left on the psyche of the Khmer people and the landscape of the country. Coursing through the roots in the soil and the veins in society is the pulse of this incident, where the horrors of the past sleep. Soil takes society’s lead; detached, the land lays idle as the echoes of history swirl in the atmosphere.

How should one think about trauma? Who is entitled to think about trauma? And what about countries like Cambodia, where spiritual guidance and a tradition of presentism blend with mythology to weave together an entangled tapestry of faith in divine intervention?

The films MONOLOGUE (2015), … far away (2019), and Funeral (2018) comprise Vandy’s Monologue Trilogy. MONOLOGUE addresses Cambodia’s violent past. It is a study of the nature of trauma—how it collapses time and space and makes taking distance from history an impossible task. Both personal and public in nature, the film documents a small plot of land near the rural Banteay Meanchey province located in the far northwest of Cambodia (a region formerly known as Battambang), where Vandy’s sister and grandmother were discarded and buried alongside five thousand others during the Cambodian genocide under the Khmer Rouge regime, which would result in the death of between 1.5 to 2 million people by the end of its reign in 1979.[5] 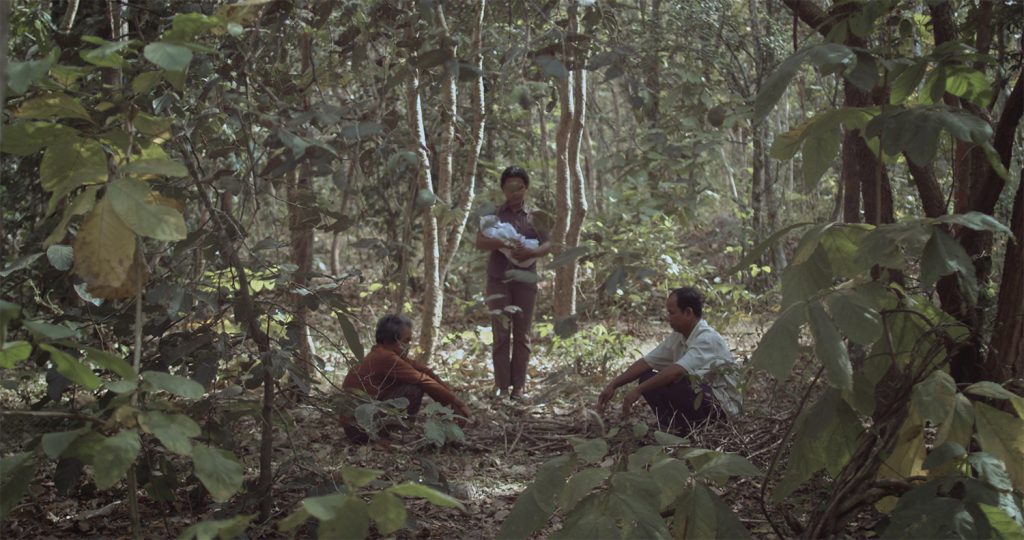 The video is the artist’s monologue to the sister he never met; she passed away at the hands of the Khmer Rouge three years before he was born. It reveals his struggle to come to terms with the senseless violence and loss experienced by his family and the country. The artist’s own voice, which wavers between resigned and impassioned, provides us with an emotional counterpoint to the dreamlike atmosphere captured in the film. Against tranquil scenes, the atrocities he speaks of seem all the more inhuman and unfathomable and become increasingly disquieting to comprehend as the video unfolds. Captured on film, the land today bears no outward scar of its horrific past; an idyllic bamboo grove and two imposing mango trees—mere saplings in 1978—dominate the plot that is now used for growing rice. The juxtaposition of the Tuol Sleng Genocide Museum which houses the Killing Fields tourist site where signs, skulls, and graphic audio-visual accounts testify to the brutality of the Khmer Rouge regime and the pastoral field framed in MONOLOGUE renders the trauma that still haunts survivors palpable. Vandy’s description of the present-day land and ordinary farming life exposes the absurdity of the killings that took place before. This unmarked grave is but one of countless others around the country that are now productive agricultural land, fertilized, ironically, by the bodies of the dead they hold. In Vandy’s own words, “it seems like fiction, but it is not.”

The second film to be produced in the series, Funeral appears as the third and final installation in the trilogy.. It explores cultural society, disclosed, and occluded histories, and collective and individual memory and amnesia through the cinematic capturing of Cambodia’s landscape, which holds entombed within its contours a richness of untold stories and lived experiences, which now lie buried within its terrain and felt in the atmosphere of its surroundings.

Funeral opens to the sound of a voice speaking about the release of slaves who “wonder for a moment about their existence and their freedom. Death settles the course of life. The dream also burns and will soon find its origins. The civilization born of dreams fades, darkens, and collapses. Already it reaches a point where everything is fragile and deadly.” The viewer wonders, Who are these slaves? To whom are they enslaved? Are all humans not slaves to themselves, often captured within self-made cycles of illusions and ghosts of memories of the past? Are we trapped by our anxiety of both the known and unknown?

Funeral could be described as Vandy’s personal reading of civilization as a cyclical process, which is necessarily reborn through death and cremation. In the ashes of the past there is an opportunity for rebirth and new life, yet the sheer act of creating is to be aware of the creation’s impending end. 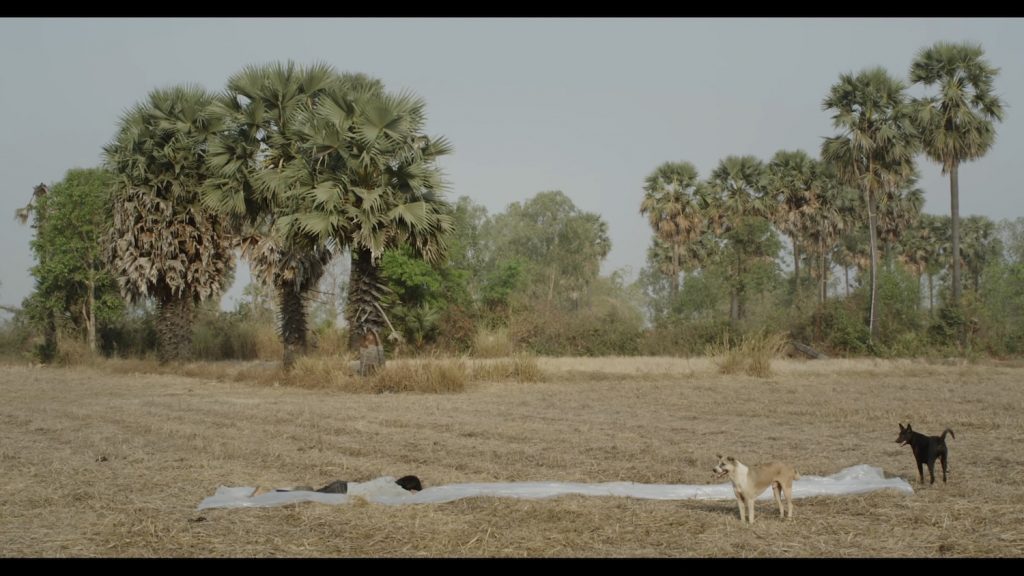 In Funeral, Vandy again considers notions of death and the afterlife, but whereas the research for MONOLOGUE was rooted in the stories of survivors of the Khmer Rouge regime, in Funeral Vandy incorporates a fictionalized narrative of Khmer myths and legends to tell the story of humanity. Humans have rich and layered relationships with traditional tales; “Myths exist in all countries for I think humans are mythical creatures, full of imagination. Human knowledge is not sufficient enough to reach the truth or to reach other dimensions of life so myth or imagination is necessary to hold the community at some occasions,” reflects Vandy. One place in particular that embodies an abundance of mythical narratives is the Khmer national monument and UNESCO World Heritage Site Angkor Wat.

Angkor was the capital of the Khmer Empire and Angkor Wat continues to occupy pride of place in Khmer social psychology. At its height, a period which lasted from the ninth to the fifteenth centuries, it was a site devoted to Hindu gods and cosmology that was later rededicated to Buddhism at the end of the twelfth century. Within the temple complex of Angkor Wat, there are numerous wall reliefs whose carvings carry deities, asparas—female spirits of clouds and water—and Nagas—half-cobra, half-human semidivine beings, which feature in both Hindu and Buddhist beliefs.

Funeral melds together traditional stories of the Angkor Empire and the history and the prediction of the fate of the Khmer people as stand-ins for the rest of humanity, past and present. It is Vandy’s commentary on the paradoxical characteristic of civilization(s), an unknowing register, as creator and destroyer of its own fate.

The second film of the trilogy and last to be produced,…far away follows the character of a young painter who believes landscapes do not exist, but that they are sensations produced by fragments of life experiences, created by humans as projected illusions of beauty. “Maybe the landscape is the mirror in which I can see myself through the light particles. My image in the mirror has no flavor, no smell, no warmth, rather it is the pain of wanting to become something. I’m always wondering if the landscape is an infinite dream,” the protagonist of the film reflects while standing amidst a sea of plaster-cast limbs, haphazardly strewn across a sandy field of reeds. 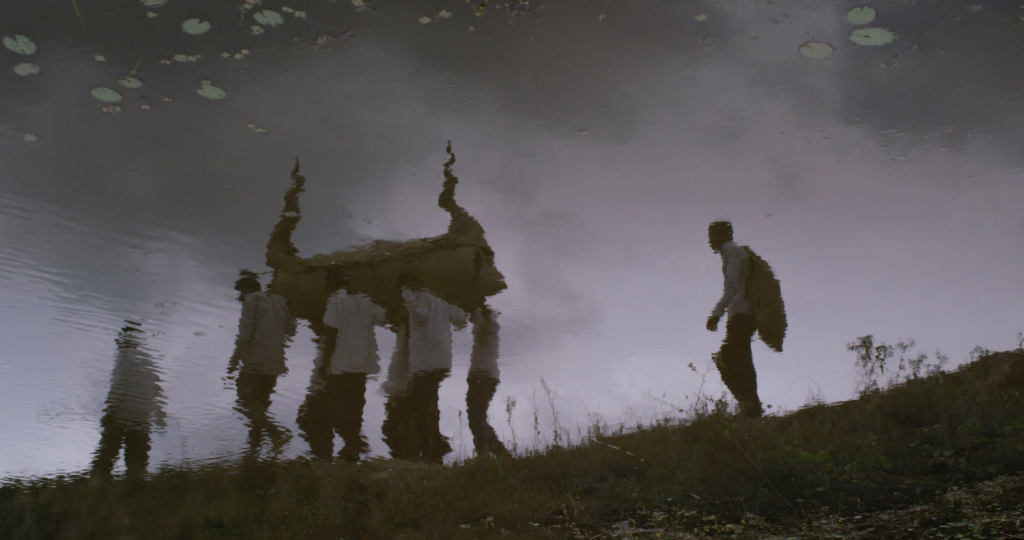 The film hints at animist Khmer beliefs and animist Cambodia. The Khmer are a people that largely believe in reincarnation and an afterlife. Interweaving these concepts raises the suggestion of how a nation struck by internal conflict and collective trauma copes; they believe in the guiding powers of the spirits and that reincarnated beings walk among them.

In … far away, Vandy was inspired by the language of surrealism to break from rationality. He composed a narrative that attempts to highlight the metaphysical realism of the universe.[6] Through arrangements of both visual aesthetics and text, he attempts to free us from the dictate of thought as controlled by reason. In this film, gender has no binary, moments are fractured in time, and humanity’s under- and ‘overmining’ of objects—the process through which we attempt to reduce objects to the parts of their sum or sum of their effects[7]—prove to unsettle, confuse, and facilitate our sense of being lost, always searching. What should we believe?

The Monologue Trilogy was produced and arranged according to the artist’s efforts to piece together, make sense of, accept, and move through reflections on the human propensity to repeat history’s (humanity’s) mistakes. Vandy’s initial attempts to produce the trilogy chronologically were betrayed by emotion. He admitted that he made several versions of what was intended to be the ‘second film,’ but found that each one was no less dark and angry than the last. In making the decision to move on to create his third film, he managed to leave behind or wrestle free from the heaviness that anchored him, and this release granted him a vantage point and distance that allowed him to move unreservedly across time and space.

The trilogy carries within it complex and complicated human emotions and experiences of loss. A loose scaffold of the stages of grief can be used to unceremoniously anatomize the artist’s largest project to date. One could describe MONOLOGUE as Vandy’s assessment of information, a matter of fact—but no less moving—manner in which to process and re-file his personal history. His repeated attempts at producing a second film would locate pain and anger, emotions he did not want to give the universe the satisfaction of receiving. The cyclical nature of history narrated in Funeral reveals a realist’s cynicism to the way life turns. And carried within …far away is a personal acceptance and exploration of humanity’s continuous search for who we are in a world that does not stop changing. This example of the stages of grieving in no way trivializes the personal and collective history that Vandy and the Khmer people experienced, nor does it discount the mastery of his cinematic endeavor. Instead, it attempts to highlight the human quality of being arrested by emotion as well as how time and space fold, enfold, and unfold in the trilogy, offering nonlinear points of entry into its narratives. 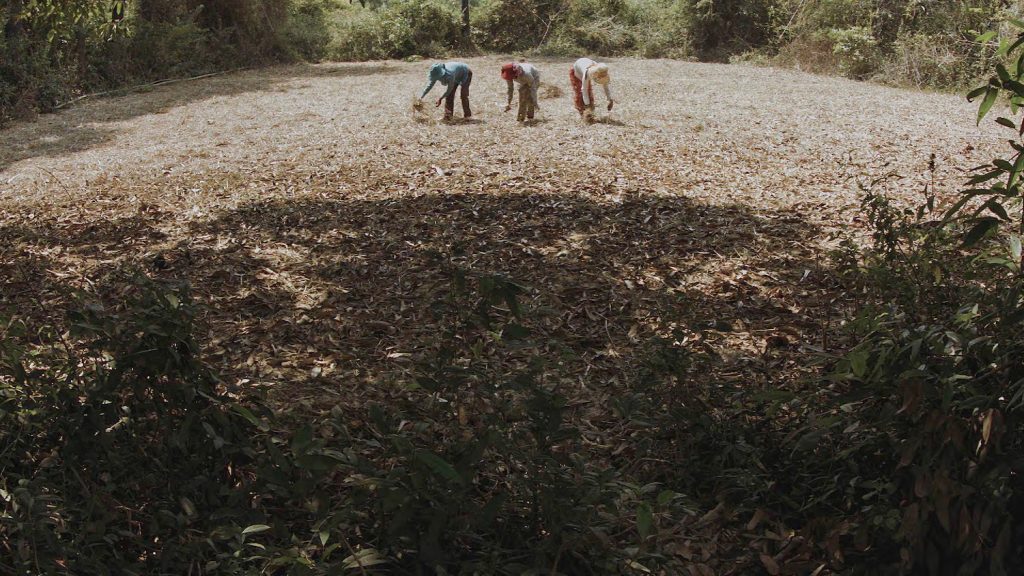 The acts of remembrance and documentation that inform Vandy’s practice stem from his concern about the historiography of Cambodia. Born in the immediate period after the fall of the Khmer Rouge, his abiding preoccupation with the lack of personal, ‘unofficial’ documentation of Cambodian culture and history, and the country’s concurrent stereotypical portrayal through images of temples, trauma, and genocide have led him to combine the vocabulary of photojournalism, documentary, and conceptual practice to produce artworks that hold not only himself but us as humane individuals accountable for the stories we articulate to form culture.

Humans meld memory with imagination; accounts of incidents form and reform, morphing through subtle lapses in recollection or challenges to the narrative. How does one (re)read memories of trauma that resist reckoning or mapping? Is it necessary to recall memories in order to grieve or mourn? And beyond this, we must wonder if we place too much emphasis and expectation on ‘mourning’ as a convention for loss?

For the Khmer, their presentism roots them in the current, where the past has already occurred (and to some, is no longer real) and been internalized, though it may hardly be mentioned, let alone discussed or questioned. For Vandy, the process of working through trauma, both personal and collective, has challenged him to engage in modes and mediums of artistic production hitherto unexplored, and in doing so, he has allowed us to share in his quest to break out of our Camusian universe. The Monologue Trilogy provides an opportunity to look at the reflection of an unconventional mirror, where we may regard both the folly and resilience of humanity.