In conversation with the artist and researcher Ana García Jácome, writer Minh Nguyen and artist Jacobo Zambrano-Rangel discuss Jácome’s practice, the social construction of disability, comparative disability studies in México and abroad, reconceiving its historical and present-day conditions through art, and the possibility of solidarity across difference. 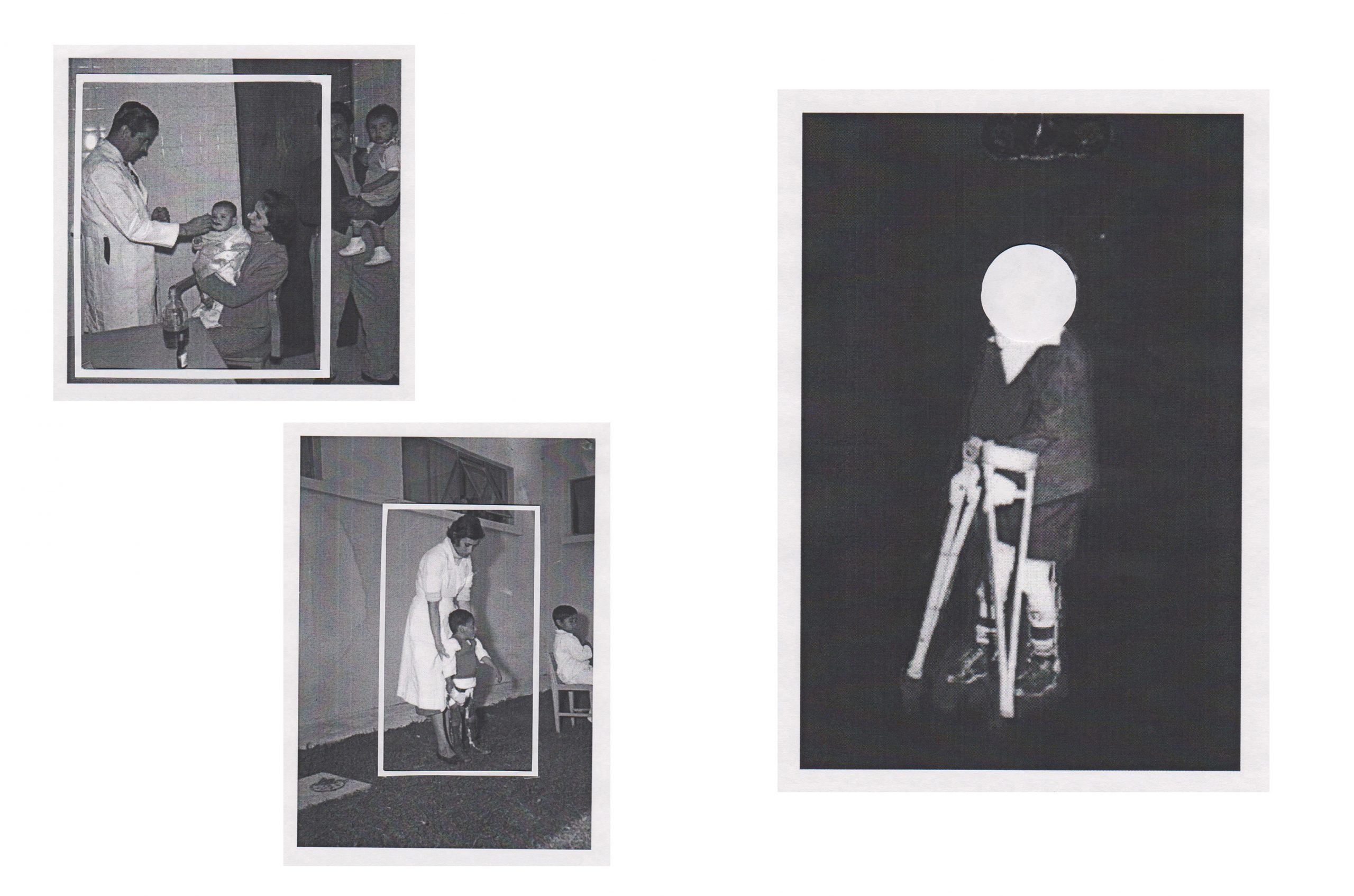 Earlier this year at Threewalls in Chicago, we convened a gathering called Colloquium Under a Palm Tree, where we invited participants to respond to what Cuban anthropologist Fernando Ortiz calls transculturation, or the complex exchange of cultural influences that results from colonial conquest. That evening, the artist Ana García Jácome, whose work focuses on theories and histories of disability in México and abroad, presented on her project It’s Like She Never Existed (2018 – ongoing). Tracing the hidden story of her aunt Coquis who had cerebral palsy, Jácome suggested that the exclusion of disabled people in family histories parallels exclusion in larger, institutional records of history.

When Terremoto approached us for this issue themed Planetary Solidarity, García Jácome came to our minds for a few reasons. For a start, her work expands disability discourse beyond its predominant loci in North America and the West, and additionally prods us to interrogate the conditions that generate such epistemes of knowledge. As for further elaboration, we invite you to read our conversation with García Jácome, in which we discuss her practice, the social model of disability, reimagining its historical and present-day conditions through art, and the possibilities of solidarity across cultural and geographic differences.

Nguyen and Zambrano-Rangel: Ana, we were particularly interested in having this conversation with you in Terremoto Magazine, given its focus on art in the Americas with an emphasis on intersections within Latin American discourse. To start, can you share your insight on work around disability issues in México?

García Jácome: Disability studies is still very much an English-based discipline, and because of the language barrier, the Latinx-based perspectives take more references from scholarship in Spain than the U.S. or U.K. Regarding the cultural field, projects in México such as the Network of Museums and Cultural Spaces for the Attention of Persons with Disabilities have existed since the early 2010s, though the access they provide is mostly basic. Some museums in Mexico City like Laboratorio Arte Alameda or Centro Cultural España provide LSM (Mexican Sign Language) interpretation of some events, materials in Braille or guided tours, but these services are inconsistent.

And the problem is not only about access, it extends to the widespread notion that the relationship between art and disability is only about therapy, that art serves as a cathartic outlet for people with disabilities. With that mindset, accessibility efforts become patronizing demonstrations of fake inclusion. Real access is a political stance that is concerned with the active participation of people with disabilities in the entire process: from production to dissemination, from research to consumption and criticism.

NyZ-R: What you’re saying makes us think of how terms like accommodations imply that the benevolent institution is aiding the needy, when it’s more about expansions of forms of communication. Language is also a big focus of your project The [   ] History, which you were working on when we met you in Chicago.

GJ: The project departed from thinking about the differences between how I experience disability, how others understand it, and how institutions name it then determine services based on those definitions.

NyZ-R: Yes, and in the project you find that current common terms such as discapacidad, discapacitado or persona con discapacidad began to replace previous terms such as invalidez, inválido, impedido, or disminuido around the 90s. How did these terms change? Who was advocating for them? 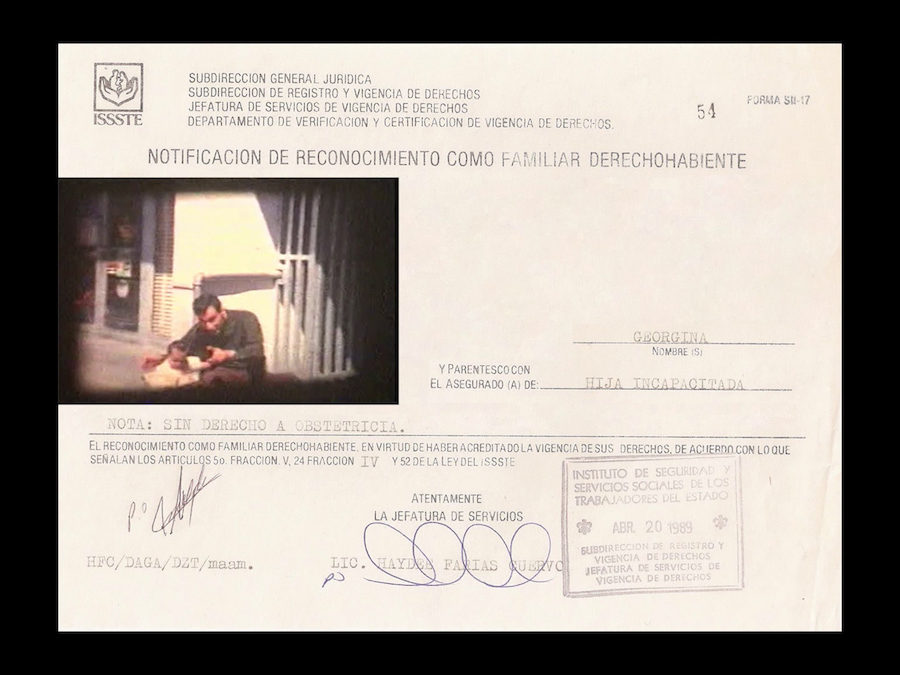 GJ: The shift to discapacidad resulted from the United Nations’ usage in the Spanish version of the International Convention for the Rights of People with Disabilities. Advocated by nonprofits and civil associations in México, the word was slowly introduced to everyday language, appearing in legal and bureaucratic documents, and mass media. Today you see this usage overlap with more outdated ones, such as how paperwork regarding workplace accommodations still uses the term inválidez. To complicate it further, there are other widespread terms, like personas con capacidades diferentes (people with different abilities). But to me this preoccupation with euphemisms is rooted in the attitude that disability is inherently bad and shows that despite changing words, it hasn’t changed much in popular imagination.

NyZ-R: With this issue’s theme of Planetary Solidarity in mind, we are curious whether you think it’s generative to envision an ‘international history of disability.’

GJ: It’s important to understand the history of disability as a constellation, while also not dismissing the particularities of their specific locales. Semantic and conceptual shifts especially from imperial countries highly influence the language, knowledge and experiences of the colonized, so it’s important to stay grounded in one’s own territory. Let’s take crip and disca culture as an example: crip is the appropriation of crippled, a reclamation of a derogatory word used toward disabled people, turned into a tool for self-identification and community building. In México the word disca works similarly, sometimes even as a translation of crip, but it is also regionally specific, as it departs from discapacidad and the history of that term. 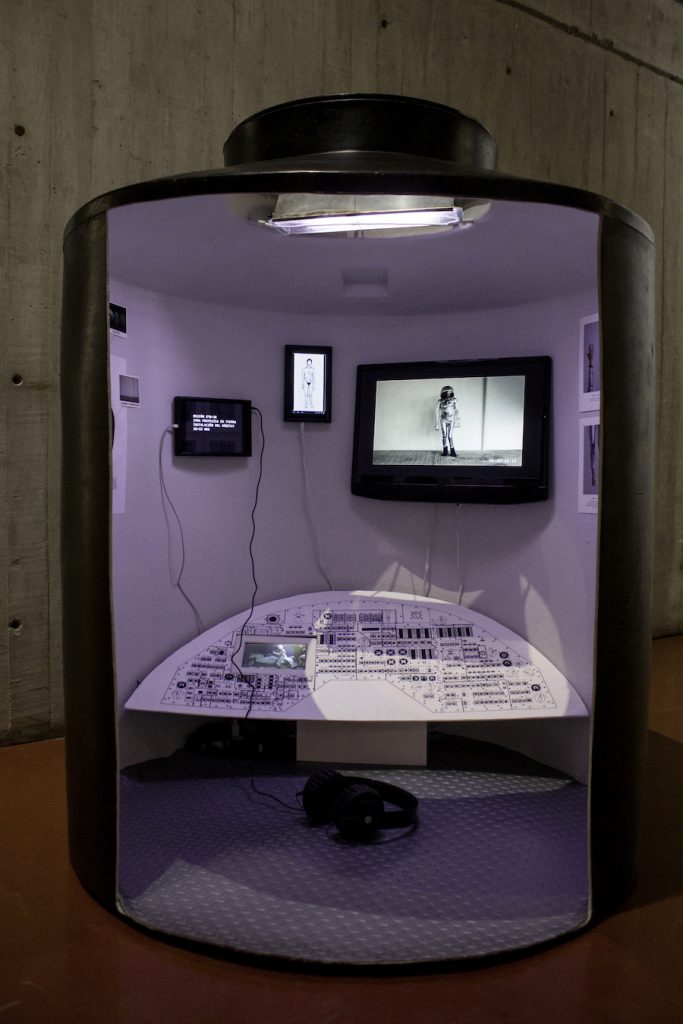 NyZ-R: The [   ] History is a piece of writing, but at times you also stage your research with more poetic agency, or in visual art. Why do you find art a generative field? Or, where do you see the function of artistic practice within the construction, representation, and distribution of scholarly research?

GJ: Art has the potential to be both political and sensitive, by which I mean that it can address things in a way that speaks to intuition and emotion. I believe that when art is relatable, it is a gate toward political consciousness. My early work started as an investigation of my own body, its shape and movement and the spaces where it was allowed to exist. Then I started wondering about others with similar experiences and I turned to the story of my aunt, who had cerebral palsy, to find connections and differences between our experiences of disability.

NyZ-R: Could you please talk more about It’s Like She Never Existed and how that project draws between personal experience and broader historical dynamics?

GJ: This project departed from writer and theorist Ariella Azoulay’s concept of potential history, which Azoulay describes as “an effort to create new conditions both for the appearance of things and for our appearance as its narrators, as the ones who can—at any given moment—intervene in the order of things that constituent violence has created as their natural order.” I found myself knowing almost nothing about my aunt and wanted to not only know more about her but also examine why I didn’t know. When working on this project I noticed the different narratives that I was weaving to put together her story: accounts from my family members, images stored in photo albums and film collections, and her personal and medical documents. These different layers helped me connect her life to a wider social context and think of how it influenced the way in which disability was perceived and treated within the family. 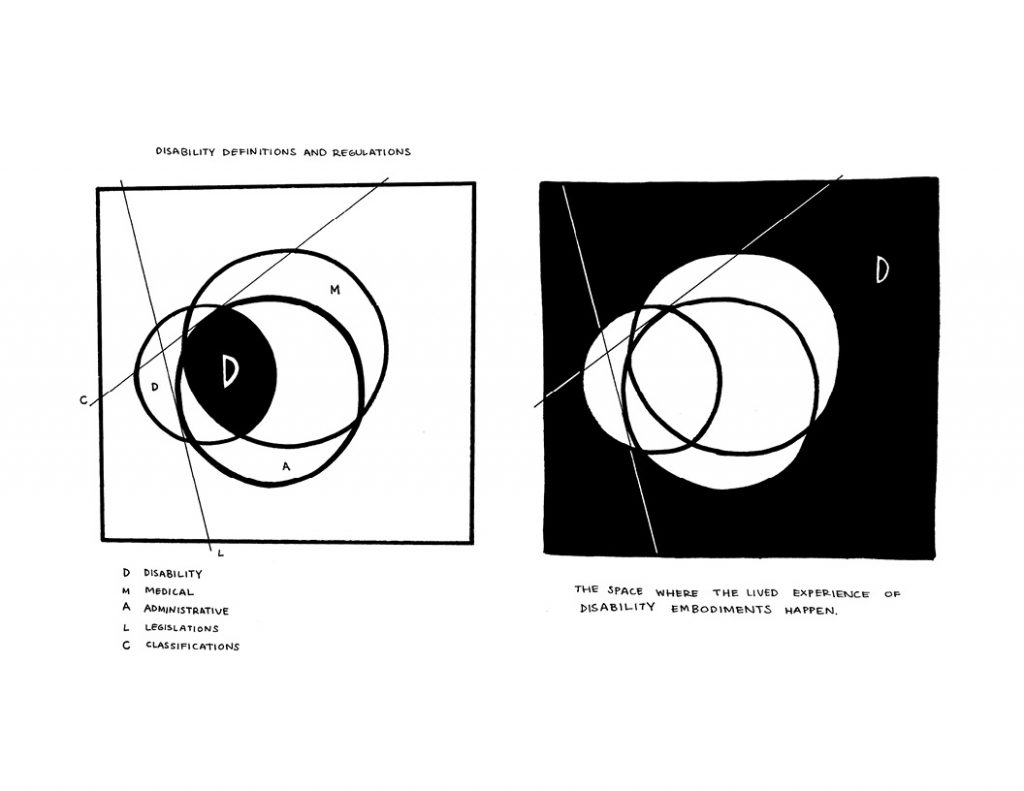 NyZ-R: Your project We Protest Against Polio is a ‘parafictional exhibition’ of true and embellished ‘artifacts’ based on the true story of a man in México who claimed to be a doctor with a cure for polio in the 1950s. You gathered materials on him from the Historical Archive of the Secretariat of Health, which look official at first glance but upon closer inspection are arbitrary, such as receipts of his magazine subscriptions or a generic response from a library in France. Do you see the takeaways from this project relating to The [   ] History, where one is about the absence of an archive and one is about the falsehood of one?

GJ: These separate projects are connected by questions of how the Western conception of history is embedded with a narrative of progress. What I found fascinating about Dr. Reinaldo Martinez was that though the “treatment” he tried to validate scientifically was eventually debunked, this “magical cure” he presented reflected the desire for a “less disabled” future, pushed by mainstream institutions and media that portrayed disability as a tragedy. For We Protest Against Polio, I combined real newspaper clippings and photographs with objects I made, like a demonstration banner and medicine vials, into a semi-fictional exhibition. I wanted to develop a potential history from the archived narrative that centered disability instead of the doctor. This work questions the authority of the archive and the validity of historical documents while also asking, what does it mean to protest against a disease?

NyZ-R: Your work, which contends with the historical linkages between disability and disease, are highly resonant today. Has the pandemic shifted your perspectives?

GJ: COVID-19 pandemic changed how I perceive my work, more specifically my section on polio, its educational vaccination campaigns and its portrayal in media, in The [   ] History. Before the pandemic happened I hadn’t considered the influence of collective affect, but then I first-hand experienced what I had been researching: the fearful environment, the urgency of spreading information, the chaos of opposing opinions and beliefs. I also noticed how easily ableism surfaces when the abled-bodied are faced with conditions that we have experienced all along, and how much the disposability of disabled lives still prevails. 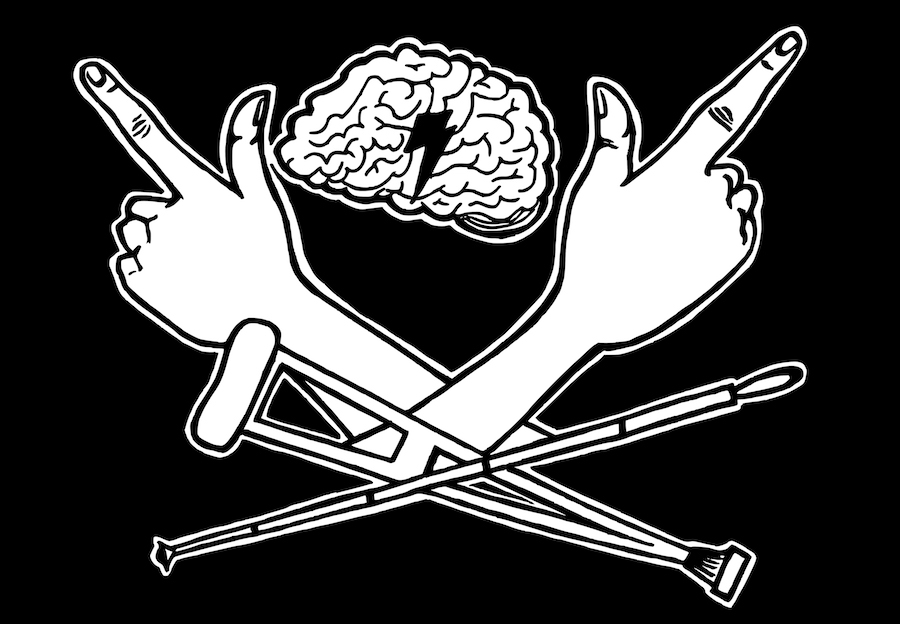 NyZ-R: The late writer and activist Marta Russell writes in Capitalism & Disability that disability is a socially created category that became essential to the development of an exploitable workforce in early capitalism and remains indispensable as an instrument of the state in controlling the labor supply today. Russell writes that disability is an “important boundary category whereby people were allocated to either a work-based or a needs-based system of distribution.” What are your thoughts on disability as a social, rather than what people commonly understand as a bio-physiological, category?

GJ: I agree with Russell’s assertion, and believe it is related to a definition of ableism as a system that standardizes attributes, abilities, and behaviors of a “productive” body. Ableism also intersects with other systems of oppression, as it’s related to racist eugenics, the historical pathologization of the feminine, of queer and trans* people, among others. And of course there is an economic aspect to it, because “accommodations”—adaptations to infrastructure, formats or languages, assistive devices, assistants— require resources that in the ableist system seems to be understood more as an expense than a benefit.

Thinking of disability as a mere bio-physiological trait obscures the big picture and its sociopolitical implications.

NyZ-R: Russell often uses the term cross-disability solidarity. Does this term resonate with you?

GJ: The term disability contains a wide spectrum of body-minds, all with different sensitivities and needs. Access and adaptations (and even theoretical frameworks) that are useful to some won’t be to others. Cross-disability solidarity is the awareness of difference within the difference and the commitment to figure it out. It’s a process that is constantly shifting but to me it’s one of the strengths of disability culture, since it is a practice of building community while acknowledging one’s own strengths, vulnerabilities, and needs.

NyZ-R: Thank you Ana, for your time.

"Crimes Against Nature": Words to Tread the Paths of Resistance