Elkin Calderón recently presented his project Libertalia Tropical, as part of his series of enquiries about islands, social grouping models and spaces articulated by means of their permanent claim for liberty and autonomy. This text engages with Elkin’s incursion in Santa Cruz del Islote, a small yet densely populated island on the Colombian caribbean, the scenery for a visual exploration where he blends the already blurry limits between the somehow libertarian utopia of pirate islands and the idea of the insular prison. Thus he presents the precarious glory of an island surrounded by an immense and permanently calm horizon where the undying hope for a new coming persists. 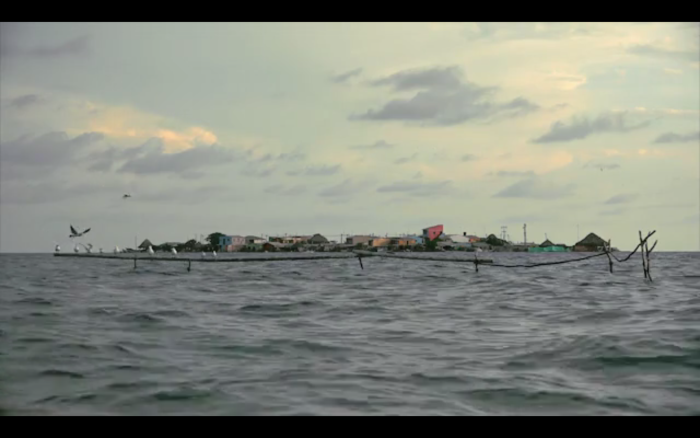 Horizon Line
A good ten years ago, stuck in England awaiting one of those residence visas a lot of immigrants get by marrying locals, Elkin Calderón discovered Hakim Bey’s T.A.Z.: The Temporary Autonomous Zones. Living in an okupas squat, his days passed amid waiting, odd jobs and reading passages from Bey in which the writer speculates on pirate utopias, those information networks that expand from island to island and that generate “intentional communities” that manifest themselves in a “a decentralized proliferation of experiments in living.” (1)

For Calderón, the island was a contradictory territory in which pirates and corsairs’ libertarian spirit was fused with a permanent sensation of being in a place surrounded by water where, somehow, he was held prisoner.

That tension, inherent to his insular thinking, created a path over the years that manifested itself in sundry ways, in artworks where geography is extended through political, cultural and above all, sentimental landscapes. In his work, the weight of that History with a capital H we are made to learn is dissolved in open observations stitched together by the fragile threads of an emotion that is always at risk of coming undone. Regardless of whether he explores historic modes for the visual representation of war, bombardment and ruins; or he brings up a letter that makes explicit the practical principles that order the United Fruit Company’s colonial policies; or indeed, if he merely allows himself to be carried away by a contemplation of the pas de deux between a curtain and an electric fan, his work is, at root, a search for unnamed fissures and scars—which in turn acts, and links his eye to the bodies of spectators that also find themselves constantly undergoing a process of dissolution and reconstruction. 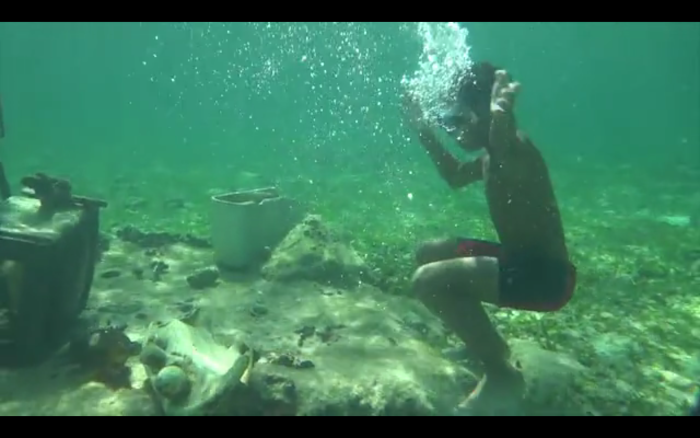 At the end of 2014, thanks to an artistic residence and invitation to sail the Mamoré River in the Bolivian rainforest, Elkin accompanied the crew of the Reina del Enin, a ship aboard which he met Fabiana, its cross-dressing bartender, about whom he ended up producing a documentary. As part of Fabiana’s moving portrayal, the documentary flirts with the idea of intentional communities as outlined by Bey, revealing, free of theory, the ship’s social structures, its interactive dynamics, its notions of coexistence and a rupture in the social canon, favored by the reality of being aboard a ship and isolated from the dictates of the terra firma world. Once again, the ship—as utopian community, as island and as prison—took on the form of traps and fantasies to which Elkin is not indifferent.

In 1991, William S. Burroughs published Ghost of Chance, a radical commentary on A General History of the Pyrates, the supposedly historical account of Captain Charles Johnson, who, some speculate, was nothing more than an alter ego of Daniel Defoe. Both books narrate the adventures of another captain by the name of James Mission, founder of the Isle of Libertalia, an utopian and anarchist community on a set of islets in Madagascar that endured for twenty-five years at the end of the seventeenth century. The community—which some specialists considered entirely fictitious—evinced a landscape rich in nuance and struggle, whose settlers were equal, sovereign, and free, and where (at least in Burroughs’s version) telepathic communication with lemurs, the islands’ original inhabitants, was both possible and common. 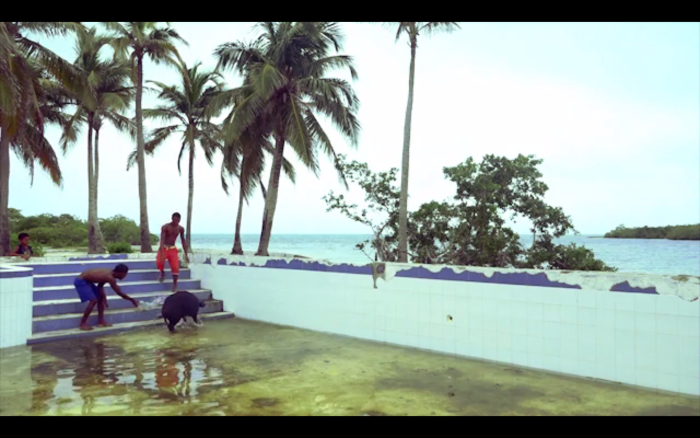 I do not wish to digress on the subject of lemurs, but it does strike me as pertinent to point out that the telepathic link between Libertalia’s two separate settler species came out of a dream.

In any case, the fact of the matter is that in 2014, Elkin Calderón received a prize from Colombia’s Ministry of Culture in recognition of his career arc and with the prize money he decided to return to visit the islets of Santa Cruz del Islote, Tintipán and Tierrabomba, places he had briefly come to know two years previously as part of an arts event. The decision in some ways related to a general literary interest in the notion of islands and their communities, perennially fascinating regardless of whether they are recounted by Hakim Bey, Daniel Defoe or William S. Burroughs. Nevertheless, in real practice, Santa Cruz del Islote is a place about which unvarnished experience is able to speak, free of any discursive intermediation: an archipelago of islands and islets fifty miles off the port city of Cartagena that was declared with some local pride to be the world’s most densely populated, since it is supposed between 600 to 900 people inhabit a surface area of barely 10,000 square meters; this just two decades after the first fisherman began to occupy its lands, up to then plagued by mangroves and mosquitoes. The islet is in some ways the practical evidence that Libertalia is possible: an urbanized place with certain public services infrastructure the community itself installed and manages; a space lacking political representation and Colombian governmental oversight, with neither hospitals nor a police force. A place that has been expanding beyond its possibilities, reclaiming land from the sea to construct more dwellings, in a community structured on a values-system that is quite different from the continental Caribbean’s cosmopolitanism. 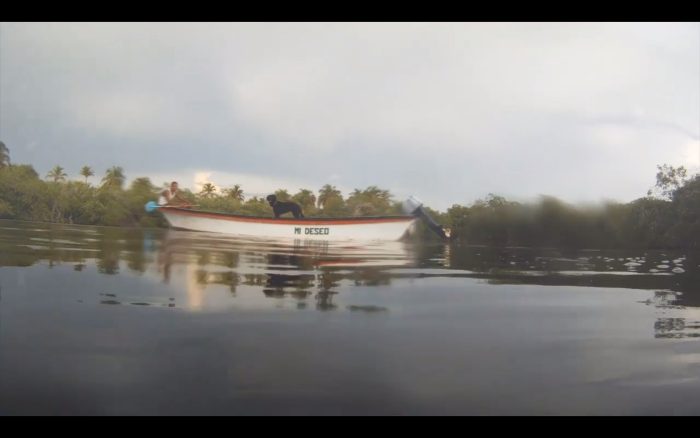 There isn’t a lot to do in Santa Cruz del Islote; workers set out from the island early, aboard motorboats, to return at night to sleep or drink rum. By day, without its population of fishermen, and with low-level hotel-workers off in Tolú, the island is the province of housewives and children. Largely drained of its putative 900 inhabitants, it becomes that place where there is nothing to do, the place where for a few weeks Elkin Calderón went to do something very much like nothing. The videos and photographs that make up the Libertalia Tropical project were produced almost without effort, out of nothing: from a hammock, they document dragonflies landing on a clothesline that fuses with the horizon; skin-diving with teens trying to pull up a sunken anchor; or swimming with children who play among buoys; or even accompany a man, from the water, who lolls beside his dog on a boat they christened Mi Deseo. 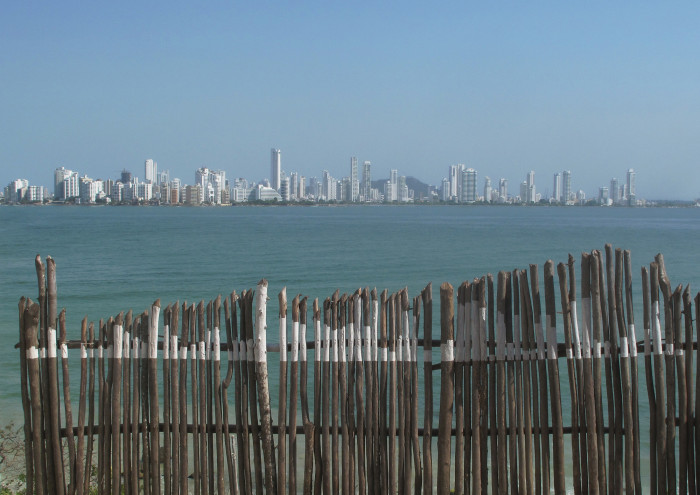 Santa Cruz del Islote is not paradise. Corrupt politicians, drug traffickers and other Colombian businesspeople have bought land on other islets and built vacation homes; the men there drink more than their share; in its poverty, a sovereign people’s balance of power has been affected by the propagation of a Christian cult that has enfolded a good deal of the population; public services provision is iffy and depends on the community’s ability to pay, and to make it viable at its own risk; and, finally, the sole presence the Colombian government will assert there is, as already happened in Tierrabomba, in the form of naval bases and evictions

Perhaps the islet is not a viable territory. Sooner or later, tourism, the market and the State will turn this land into beaches, hotels and swimming pools. Maybe piers, aqueducts and heliports will be put up. Maybe progress and security will come, but when that happens the current denizens will have to go. It is a mere matter of time before that “perhaps” becomes a certainty. There’s nothing to be done. And that’s why Elkin Calderón’s having done nothing on those little islands takes on a fundamental historic value. His work—if this exercise of not working, of just flopping down, lying there and looking around, next to the bodies of the inhabitants of Santa Cruz del Islote and within their spaces, can be called work—is a testament to the fact that this community really did exist, and resist; that it created a model in which autonomy, poverty and solidarity were possible, and that these went hand in hand. It is a testament to the fact that in a time marked by the precarious aspirations of the cognitivat to unlimited access and redistribution of resources, this exercise free of apparent cognition—this simple resistance by means of petty actions and bodies in repose—was a real political possibility, a way of making worlds—and not just some pirate fantasia. 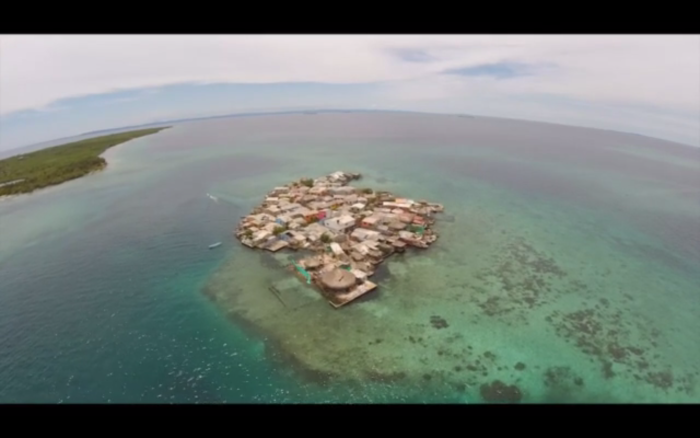 In one of the videos Elkin Calderón shot, the island is seen from the air, with its disorderly lanes, kids running around and people wandering about listlessly. From another vantage point, we can see the tiny islet has a silhouette quite similar to that of Colombia’s. The image—loaded with metaphorical repercussions, possibilities and political interpretations—was pirated by advertising professionals who reached Santa Cruz del Islote, months later to produce a Copa América sponsorship commercial. The commercial openly acknowledged the similarities between that piece of land, the size of a soccer field in the middle of the ocean, and Colombia itself.

Maybe one day they’ll say Colombia, just like this set of islands, was nothing more that an advertising creative’s literary invention. Grupo Bancolombia, one of the nation’s richest banks, produced the commercial. Perhaps Calderón’s images, resisting the passage of time, free from effort or toil, can serve as an archaeological trace, in a not-too-distant future, for seeing that the horizon line was quite different from what the social institutions that produce progress and patriotism led us to believe.

The Negative Hand: reflections and speculations on science fiction, archaeology and time that emerged from making an exhibition.