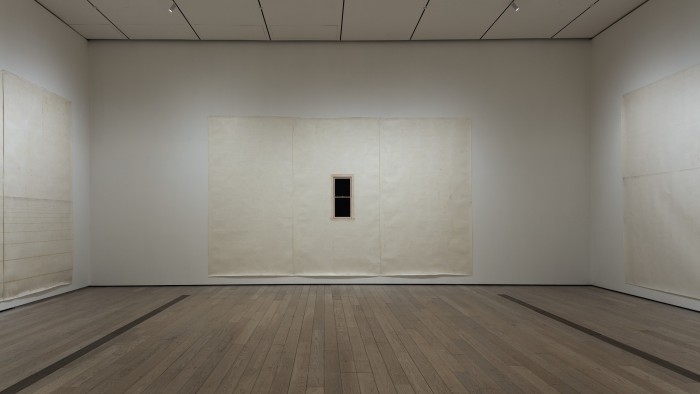 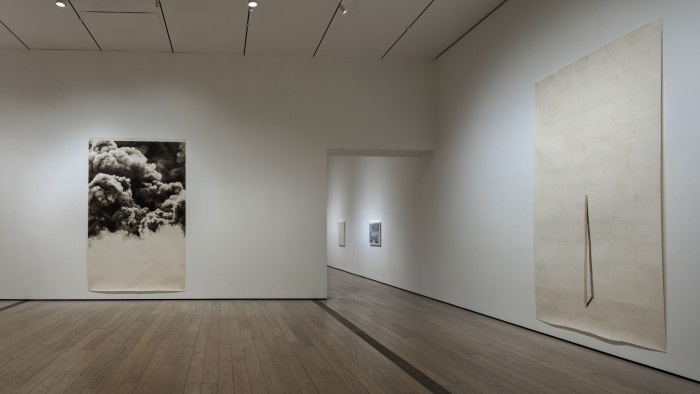 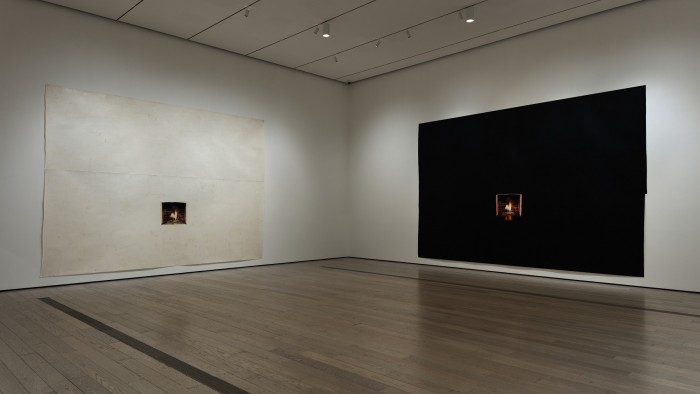 Toba Khedoori is arranged in loose chronological and thematic order. The exhibition begins with large paintings on paper that ushered her into the contemporary art scene in the early 1990s. Her breakthrough came with monumental paintings on paper, such as Untitled (doors) (1996) and LACMA’s own Untitled (hallway) (1997), within which detritus from her studio floor appears embedded in the wax surfaces. Depicting common objects and architectural features and occupying a space between painting and drawing, these impressive works seem to withhold as much as they reveal. While Khedoori’s works are emphatically two-dimensional, the scale of those early paintings brings them into dialogue with the actual experience of architecture, which she often represents in fragments. While Khedoori’s emphasis the quotidian as subject matter serves as a sober update of Pop Art’s embrace of common objects, her placement of these everyday objects within undefined and thus mysterious surroundings invites an almost surreal unease.

Departing from the large scale and two-dimensionality found in Khedoori’s early work, the exhibition transitions into the artist’s paintings of the early 2000s. Here scale, shadows, and contrast become more varied and dramatic. Untitled (clouds) (2005), for example, is a vertical format with its entire upper half is filled with billowy clouds while the lower half is mostly empty space. Before 2005, almost all of Khedoori’s works are horizontal, suggesting the horizon line of nature and landscapes in the history of art while creating a surprising contrast with the everyday objects shown within these frames. Untitled (clouds), on the other hand, is oriented vertically and the clouds occupy the frame of the picture with no sky around them.

Untitled (black fireplace) (2006) and Untitled (white fireplace) (2005) feature an almost photorealist depiction of wood burning in a fireplace. In these works, she takes the same subject and paints it twice, changing only the color of the space surrounding the image of the fireplace. Using encaustic, she makes one work black; the other is simply oil and wax on paper, like her earlier works. Through this contrast, she encourages viewers to examine these differences, inviting them to question the copy in a world where the idea that something cannot be reproduced has long ago vanished.

The final gallery in the exhibition showcases the artist’s most recent work, including two paintings depicting branches and leaves. In Untitled (leaves/branches) (2015), Khedoori executes the line, color, and proportions of foliage with technical mastery. In contrast to the photorealistic quality of these works, other pieces in this final gallery move toward grids and abstraction, such as Untitled (tile) (2015), a geometric study of a mosaic tile floor reflecting light from an unseen source.