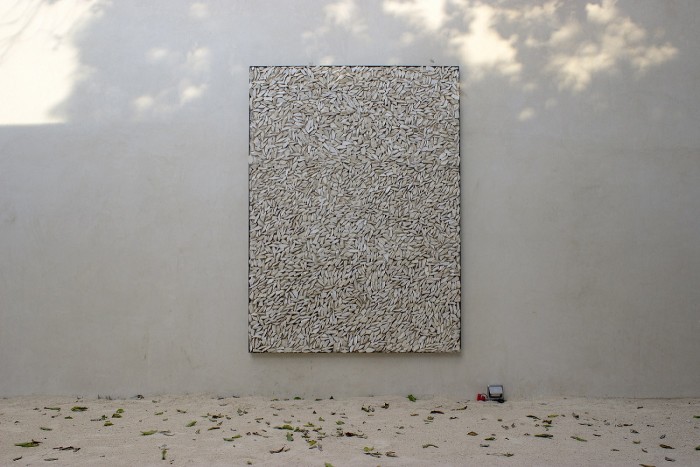 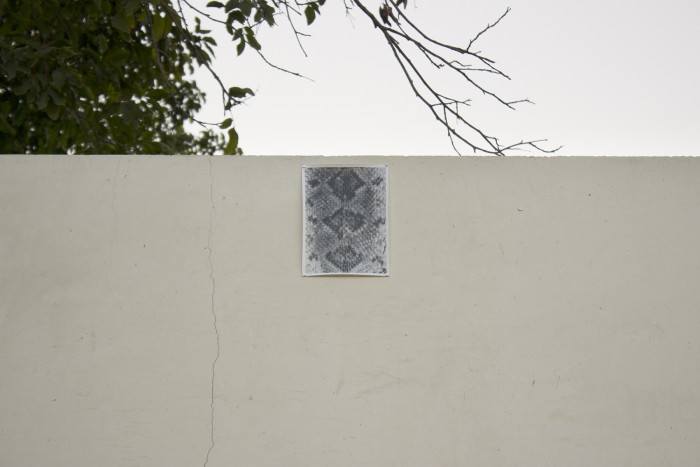 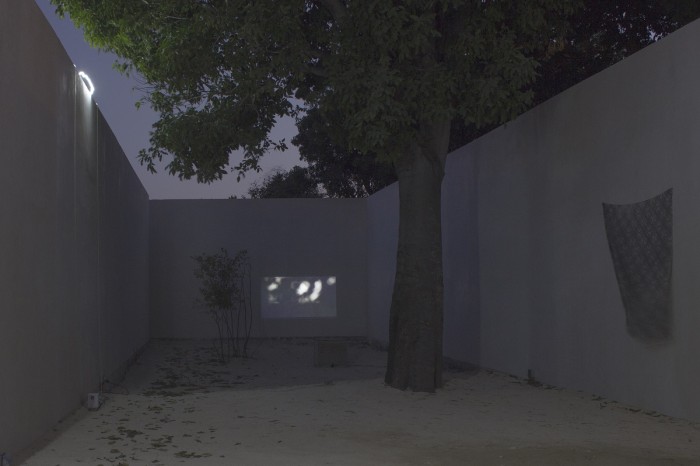 The Solaris ocean tried to respond to the communication attempts made by humans stealing images from their psyche and embodying those present-future-past shadows as if they were real.

During the short Solarism season, the diagonal of the shadow on the western wall slid unnoticed towards the eastern wall and began to creep slowly towards north. The dark triangle expanded over the space’s skin – an uneven mix of white cement, sakabeh stones’ dust and Poxoy and Chukum trees bark – as the sun got closer to the horizon. The first shadow-tattoos began their wild dance, while the afternoon wind gusts and the tree tops orchestrated the ever-changing rhythms dropped against the wall’s surface.

For some brief minutes the long deep rectangle got covered with a “total sheer” shade. Later on, the dancing tattoos will sink under the heavy horizontal shadow projected by the opposite wall, as it will climb up at the same pace of the disappearing sun. Meanwhile something started to flicker over the southern wall, barely visible spots of light. As the shadows got thicker, the quivering beams gained in definition, revealing to be exactly the same shadow-tattoos as those that just have vanished instants ago from the other wall. Same marks, but the sun was not there anymore. It was a reenactment of its immediate shadow-past. The space tried to coordinate its reality and its fiction balancing both over the edge of the falling dark. As if it was necessary to reaffirm that what just happened, really happened. This ritual went on day after day during the Solarism month.

The neon-vines hanging in the space got brighter, exchanging their milky daily viscosity for an intense nocturnal radiance. Their light tore out of darkness part of the foliage looming over the space.

A bit further up north, a black and white photograph tells another story of skins and shadow observation. That image comes from the photographic archive of the experiments made by José Diaz Bolio, fervent popularizer and defender of Crotalometry, a mayan alternative to geometry, according to his own words. In Crotalometry the space is measured through the observation of a snake’s skin, Crotalus durissus durissus, the Yucatecan rattlesnake. Its basic pattern is called Canamayté, a vertical square transfixed by two axes. By placing the serpent’s vertebrae over a Canamayté drawing at a certain hour, one could see how its shadow aligns perfectly with the inferior angle of this basic unit. Diaz Bolio wrote down:

The Canamayte-Four-Verted diagram of
proportions in the skin of the Mayan
Durissus durissus rattlesnake. In the centre:
a rattlesnake vertebra, first instrument
for solar observation.

Days later, he had found in a local newspaper a photograph of the Duchess of Windsor, Mrs. Wallis Simpson, receiving the Japanese empress along with their respective husbands. The two women wore dresses displaying patterns that were clearly based on a Canamayté. Most probably, at least one of the male companions wore socks with the same pattern. Who knows. What was certain is that the mayan snake spread out its dynamic geometry all over the planet. The poet and musician from Mérida was positive about it.

Maybe all this – the serpent, the sun, the fabric with the Mrs. Simpson dress’ pattern, engorging with the evening wind, the cyclical trips of the shadow-tattoos over the space’s skin and its constant repetition through a fiction-season, the tree tops and the Chukum, the perseverance of the experiments of a yucatecan poet, the light of the neon-vines – made part of that anagram, written close to the entrance of the space