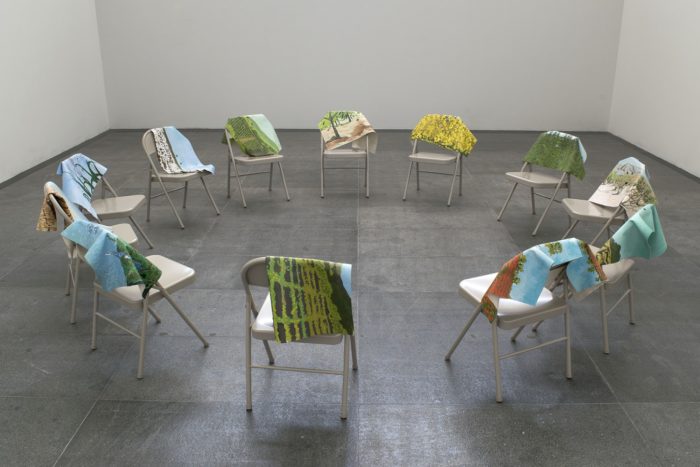 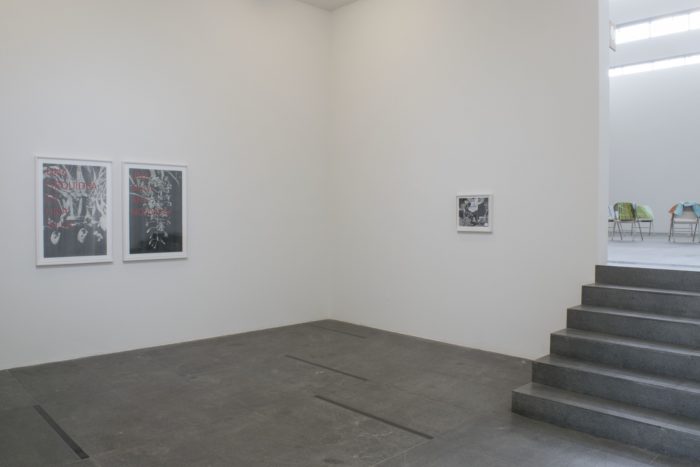 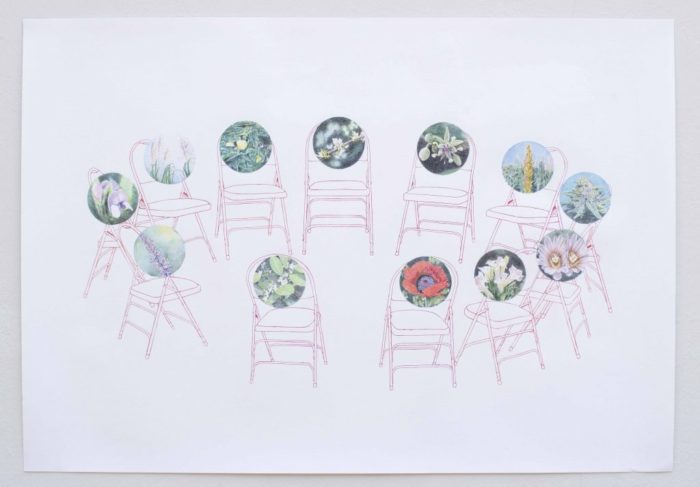 To extend a folding chair is to claim a small stretch of territory with the intention of directing our attention toward what is in the periphery of our gaze. If we sit in two folding chairs, face to face and close to each other, let’s say a meter away, the furniture suggests the possibility of a conversation. If we integrate a third person with their respective folding chair, the courtesy of some or the uncomfortable silence may also lead to dialogue. And if no one has taken out their cell phone, the conversation starts. If a fourth person with a fourth chair joins, the possibility of forming a circle becomes evident, and the bodies move away from each other to create it. Chairs open and close as more people and chairs become part of the conversation. The building of a community leads to an unfolding: energy is released through the physical encounter of people. The folding chair is thus an element of the modern human collective. The formation of a group of chairs will reflect the intentions and dynamics of the group of people who sit in them. In a circular formation, hierarchies are eliminated and an open exchange is suggested. In this exhibition, the folding chair is a symbol of dialogue, a physical platform for political resistance that fosters human relationships through encounter and exchange. To organize, we have to sit and talk.

Take a third flower and it will be a bouquet

Flowers also unite people and are a central element of many of our social rituals. In Mexico, peonies welcome, chrysanthemums honor our dead, roses are for loved ones and lilies are for celebration. When different flowers are gathered, the diversity of smells, colors and shapes reveals the fertility found in difference. In addition, flowers can be understood as a metaphor for capitalistic systems of production: with each blooming or unfolding, seeds are produced. These allow the flowers to reproduce but are also cultivated and exploited for the fruits they generate. Poppy, coffee, marijuana, tobacco, peyote, corn, sugar cane, cocoa, coca, salvia, soybean, cotton, cherry and orchids: flowers that disappear within the shadow of agriculture and whose pollen enriches the economy and, by extension, the underlying political and sociocultural systems that sustain it. The flowers in this exhibition represent biopower and its life-sustaining role. But wilting is inevitable. In the ephemeral, delicate and lucrative existence of a flower, the impending failure of an unsustainable system of production and consumption is made manifest.

To draw flowers sitting on a folding chair

In a moment of heightened social anxiety where the media imagines a discouraging future, Javier Barrios has decided to to draw chairs and flowers. For a long time, Barrios has found in drawing a space to reflect on the construction, (re)production and distribution of images in a society mediated by signs and symbols. In Sillas plegables y flores, Barrios presents a series of drawings and paintings that draw attention to the graphic aspects of social organization, reminding us of the importance of symbolic imagery in revolutionary movements as a collective identity. His pencil and brush strokes transform the ideas of ​​resistance and self-organization into symbols that, presented as folding chairs and flowers, have the capacity to act as a rumor. Unlike the rumor that the State disseminates to control the masses through fear and falsehoods, the rumor in the work of Barrios represents dissent: a secret language that unfolds to inspire organization and critical dialogue in the socio-political context in which we find ourselves. In this way, Barrios politicizes the everyday through two elements that allude to affective relationships; in deploying this symbolism, the artist assures us that as long as we gather folding chairs with flowers, there will be safe spaces, for resistance and to find the collective force that will help us challenge structures of power.