Without these surpluses, Capital cannot be produced.

Who decides the fall?
Who decides who sleeps and who doesn’t?
A boring Sunday smelling of suicide
A chance to be someone else.

I confess myself full of desire. I came to SIEMBRA looking for an image; equally one from my childhood as one from the Instagram of Palais de Tokyo in Paris. This missing image can be found in the kurimanzutto’s (Mexico City) most recent curatorial project, articulated through four questions. I cite three of these:

“How may we re-imagine kurimanzutto in 20 years of its existence? How can we propose a different way of experiencing time? What place does the gallery occupy in the world, the country, and within the communities it is a part of?”

Siembra [The Sowing], referencing agricultural economies, is, of course, an ironic metaphor for what happens at kurimanzutto, as (emerging) artists are planted to then sprout into the global art economy. The statement is clear: the gallery’s self-conscious gesture to “re-imagine” itself reveals its power in determining symbolic capital and deciding who serves as viable seeds. “Community” is not much more than that tight race to emerge as an individually successful artist.

In the September edition of Siembra,[1] one finds artists that are part of the gallery alongside Others that are not; discerned mainly through who had to work longer to be there (in this new experience of time). Carlos Amorales, Sofia Taboas, Pablo Soler Frost, and Miguel Calderón barely approach a gesture of representation of their personal fantasies—to deconstruct men, chase nahuales, attack the ego with handcrafted technical reproduction, and lose the landscape in favor of a new vertical horizon. Their works (albeit sometimes exceptional and brilliant) look rather minor. On the other hand, the emerging artists must mass-produce, weave, bring in electronics, build, and prove their worth through their bodies, functioning as workforces of the new social and symbolic capital, as well as merchandise. 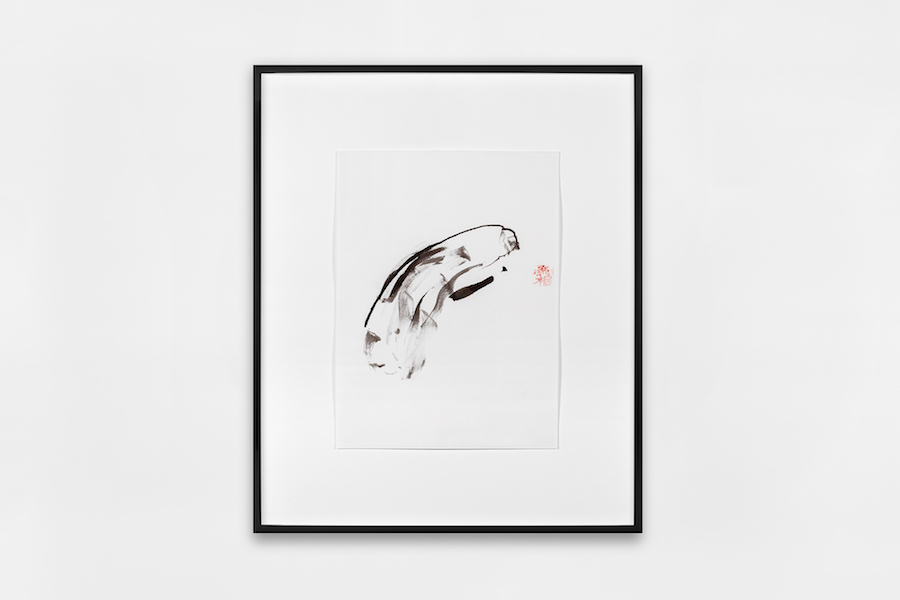 In El Cubo de Rubik [Rubik’s Cube], Daniel Montero reflects, “Since 1995, it was generally known (consciously or not) that one had to follow a set of requirements to enter the (art) field: to be young, have a gallery, ask for a fellowship, and to agglutinate people at parties, selling beer… It is obvious that all this did not guarantee long-term success.”[2] What angers the public, then, is that sometimes it does work. In Mexico there is a certain taboo that surrounds success and social mobility. A feeling of jealousy and admiration for the Other. “The grass is always greener on the other side.” The art world’s double-play of the classic processes of symbolic cooptation are gleefully evidenced in this exhibition. On one hand, neoliberal logics require energetic, libidinal strokes of excess: oil, revolutions, icons (in surplus); but in a taxable form: gasoline-plastic, identity-belief, merchandise. Excess alone is dangerous and of little use, without these surpluses, Capital cannot be produced. Perhaps, and only perhaps, because of this are Salón Silicón and Biquini Wax present in this exhibition from within such a vast panorama of independent art production. Those who are visibly working with the possibilities of desire and merchandise, whose refinement[3] can be effective.

Biquini Wax, pioneer—and since then, surpassed and trampled—of the independent (artist-run) spaces of 2010s, presents a plastic orca cadaver. The beached whale, more than a nostalgic image of a more hopeful era (as has been said as much), is critical thinking. The piece has a bibliography, filmography, an inconclusive glossary, methodology, theoretical framework, and an installation as leaking as the economy it attacks.

It is an essay in the most beautiful sense. An essay on what, you ask? The metaphorical crisis of Mexico’s neoliberalization as represented through the country’s most famous whale: Keiko (aka Willy). The piece is a A Museum of Natural History of NAFTAlgia Over The Span of a Decade (1986–1996). In it, processes are exposed and interrogated through images of pop culture, political agents, and neoliberal trash. It stands out in the context of a group show because of its complexity, but it is not ingenious that it be in kurimanzutto after being shown in Paris.[4] Contradictions abound.

The capitalist contradiction—which is the same as that of the Left and revolutions—is that minorities, once in power, become an a-critical ruler. It is almost logical that a whale be the winner amongst all of the fish that make up the aquarium of young artists. It has the values of the twenty first century: it is critical, intermediary, produced under socialistoid collective logics—from within Biquini Wax, whose internal art-making dynamic is part of its rarity as a temple, cybercafé and pataphysical place. It is antimonumental, smart. Simple enough to be transformed into a meme or take selfies with and sophisticated enough to seem important. It contains, in its entrails and its symbolic exterior spill, Capital’s immanent logic. 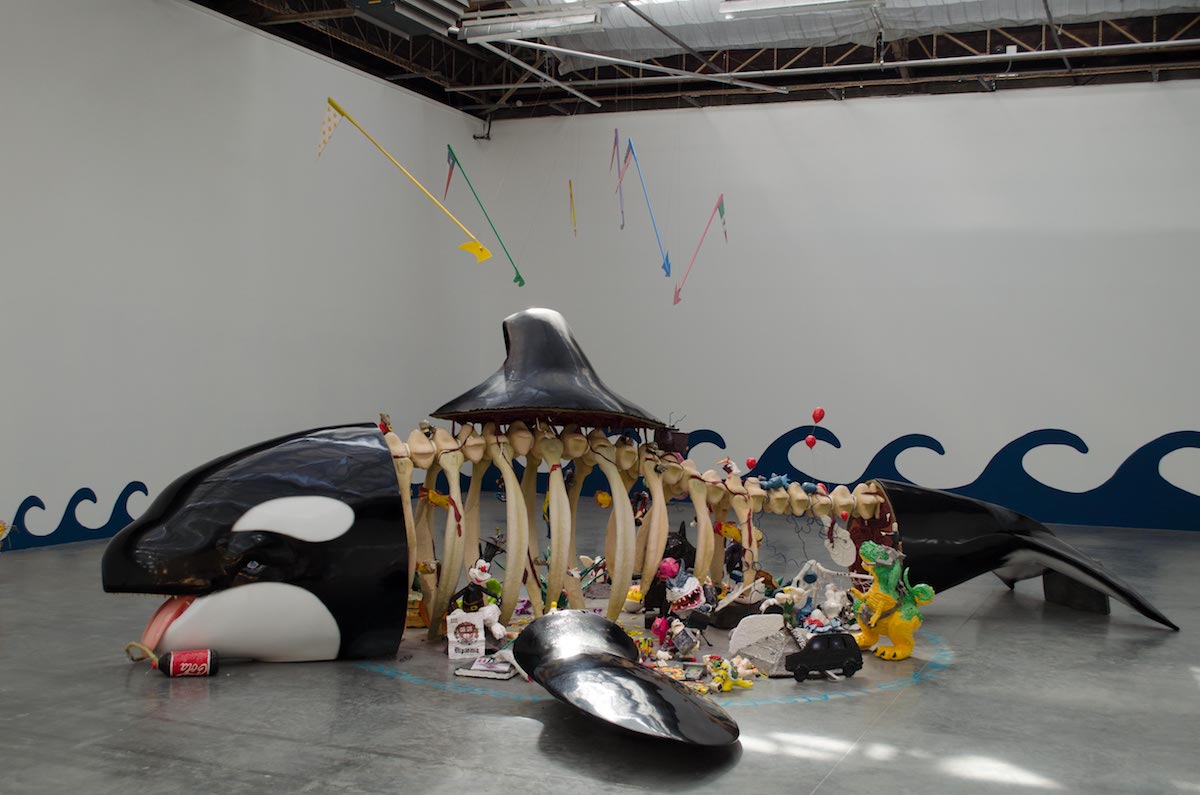 Marxism is good business—a fact already surmised by Marcuse[5] when he warned of the danger of the democratization of culture and discourse; not because of elitist anxiety, but because art’s absorption into spaces administered by capitalist commerce would disregard its criticism and incompatibility with capitalism itself. There is a good econo-symbolic performance in the use of the orca. Through a NAFTAlogic process, exploding through infla(ma)tion, the aging and worn-out image of Keiko (as a symbol and stock) returns to Willy. There it lays dead but with more value than ever: it is a zombie. When a whale beaches, be it due to age, climate change, or because it was effectively full of the plastic that results from an anthropocentric world, the animal lays stranded between hostile dry land and ocean waves: a type of beachy mud or sludge.

In the face of spiffy European Baroque, some Argentine poets rebaptized themselves as neobarristas:[6] a Latin American Baroque, that from the instability of not having temples or marble but rather mud from the Río de la Plata and the sensibility of the nearby neighborhood, they create a poetics of waste and fragile bodies. A neobarrist allegory emerges as Keiko’s skeletal body is exposed, found dead in some gringo tourist spot, pierced by all the symbols, gestures, and histories that murdered it. What is the barroso but the interiorization of the crisis? And what is sa la na, a yuum, iasis/laissez faire-laissez passer but the staging of the millennial’s (commercialized nineties agent that they are) sex appeal towards loss, excess, the cinisism of politicians and a future of austerity?

The country’s history—of Mexico City as the driving axis of the centralized State—is one of failure; the unresolved promise of bankrupt modernity. Once the neoliberal project and our promised promotion to the Salinist First World aground only the wrecks remain—another sea metaphor. Biquini Wax seems to tell us that what remains of the national project is a sensibility altered thanks to an imagination guided by rough, cheap merchandise. Shabby images where fast food, childhood fears, your idoles, the polished faces of celebrities, and politicians feeding the agonizing whale live together. Who killed the whale? Those images which tie us to a lost future where Mexico can be free live together. As Keiko itself (AKA Daniel Aguilar Ruvalcaba) says in Cetacean in an interview as part of the exhibition: “The orca’s entrails contain everything that liberates us.” 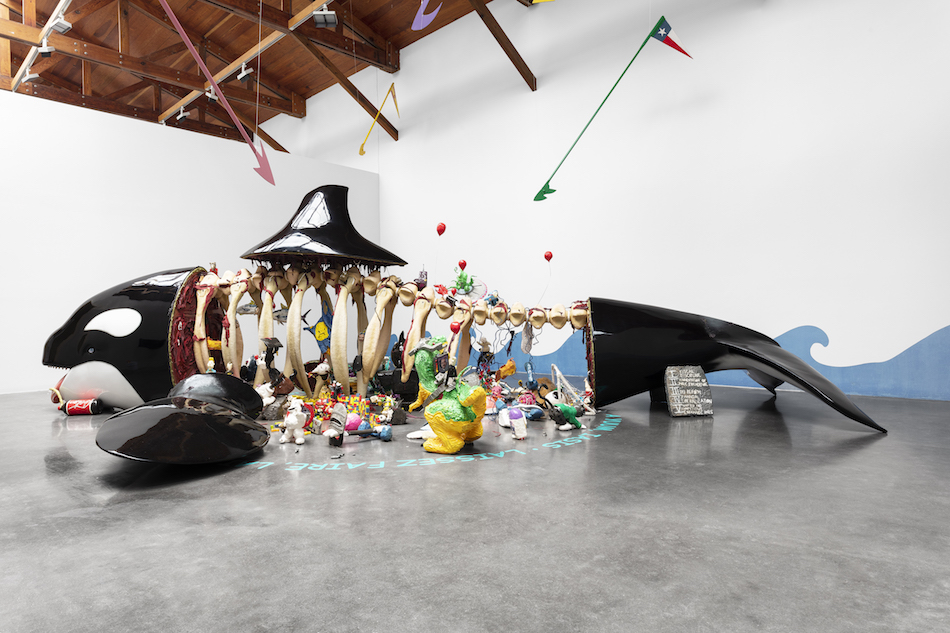 Gabriel Orozco had already killed the whale. In 2006, he showed Matrix Móvil [Mobile Matrix] at the Vasconcelos Library, financed by Conaculta: a consolidation of the link between the State and the art elite. A mere ten years after Willy’s journey through Mexico, as if it were a relay. It would be a gesture of cooptation that kurimanzutto harbors a piece that aspires to criticize NAFTA in the time of anti-monuments? Is it an anti-homage seeking to checkmate, in an effective yet cynical placing on the abyss, what produced its own success and that of Orozco: the symbolic global death of Keiko, that is to say, the country’s economic liberation?

It is a rather regular gesture of the post-Benjaminian Left, to invoke the ghosts of past struggles to one again prosecute History. Beyond the call to generational nostalgia, one can find a globalist, anti-nationalist and extractivist whale in a gallery in 2020. Just as Orozco’s piece was read from a pedagogical ethos where matter, texture, and gravity erect a subject self-conscious of being a spectator (Buchloh)[7], Keiko-NAFTAlgic seems to be exposing the ease with which capital influences our desires and inquiries through which scarcity becomes creation and resistance; spectacle. It can be seen as the allegory of the eradication of radical political history, on the eve of the signing of NAFTA. Is it dangerous? Yes. Does it create critical leaks in the aquarium? I would like to think so.