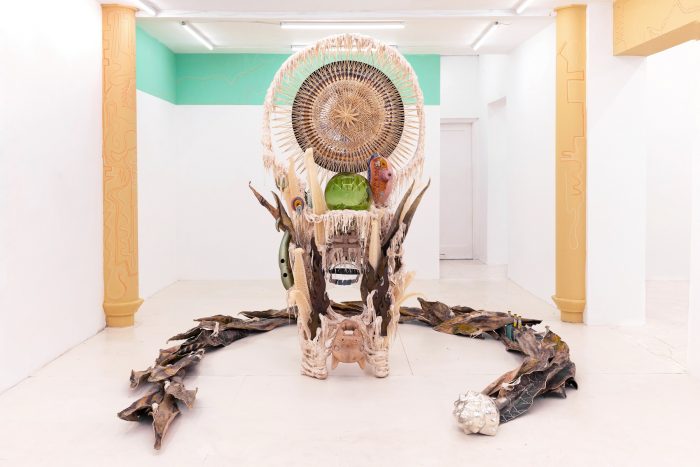 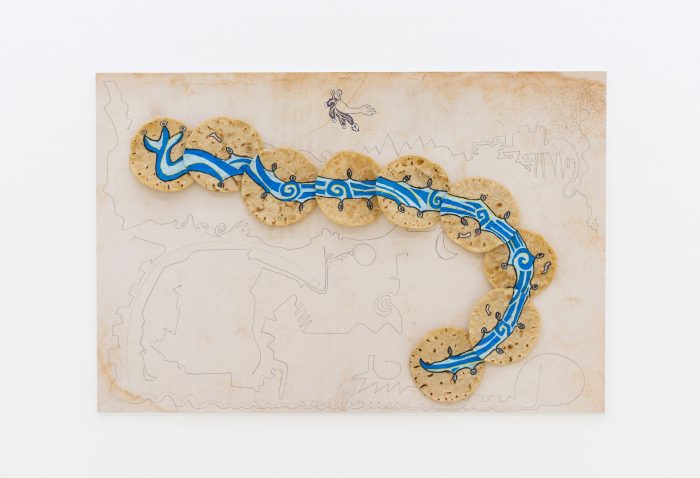 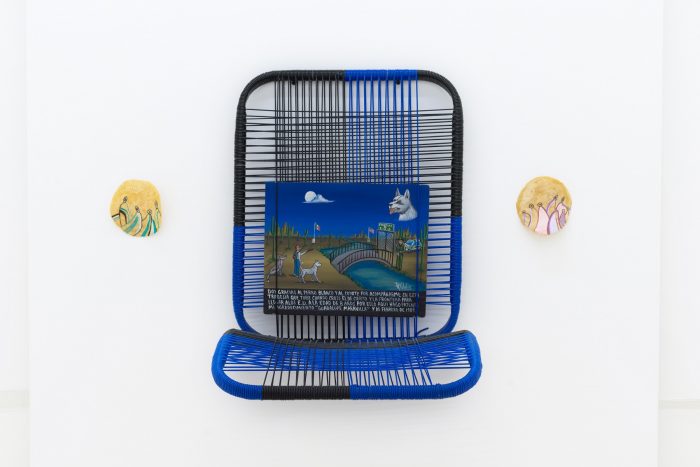 Jack Barrett presents Saga, the first solo show by Guadalupe Maravilla (b. 1976, San Salvador, El Salvador) at the gallery. Maravilla is a NY-based artist hailing from El Salvador, whose interdisciplinary practice bridges the disciplines of drawing, installation, and performance. With Saga, Maravilla presents a new body of work that reflects on the struggles of undocumented immigrants and asylum seekers, particularly in the context of repressive US policy. Maravilla, who immigrated to the States alone as a child from El Salvador to escape civil war, has devoted his artistic practice to articulating his own migration story, and to shaping spaces of healing through teaching, activism, and collective ritual. Drawing heavily on autobiography, Saga is conceived as an epic, personal account.

Across the work, Maravilla considers how the systemic abuse of immigrants manifests as illness in the body—reflecting on his own endurance of cancer, which began in his gut. At the center of the exhibition is Disease Thrower #5, a sculpture which also functions as a headdress, instrument, and shrine. The piece is part of a larger series of healing machines, which include totemic objects and materials collected from sites across Central America, anatomical models, and sonic instruments such as conch shells and gongs. Surrounded by a trail of agave leaves shaped as a serpent—a symbol of renewal—the piece is at times played by the artist, generating therapeutic, vibrational sound.

Drawing, as an indigenous medium, sign system, and spatial practice, exists in the exhibition in many forms. Marking the walls of the gallery, Maravilla reinterprets a Salvadorian children’s game called Tripa Chuca (“rotting guts”) in which two players take turns drawing lines that do not intersect. Dating to Pre-Columbian time, the game is a ritual that the artist revisits with an undocumented participant, forming a discursive map between persons who share experiences of border-crossing. Saga also includes three drawings on paper and a handmade pop-up book, which reference 16th century indigenous manuscripts such as Historia Tolteca-Chichimeca that tell the story of the original groups that migrated from Central America during colonization. The documents, which depict the regions of Maravilla’s own migration route through Honduras, Guatemala, and Mexico, included Nahuatl ideographs and illustrations conveying indigenous knowledge of the land such as crossing routes, rituals, and plant medicine. Marvilla alters and adapts the motifs to address contemporary immigration concerns, forming a ground which he remarks with Tripa Chuca.

Understanding the self in relation to others, and to community, Maravilla incorporates the gestures of many individuals into his works. Included in Saga are a series of small schematic drawings made by the artist’s surgeon in 2013, which indicate the location of his intestinal tumor, and medical approach to its removal. The drawings complement a small Milagros, or “ex-voto” painting—a vernacular artistic form that is traditionally commissioned to express gratitude for one’s survival of perilous events. Maravilla worked with an artisan in Mexico to make the piece, along with two other works that together narrate the artist’s life story. The painting in Saga, entitled Milagros #2 depicts the artist laying in a hospital bed on the day of his surgery, and is adorned with votive objects through collage. An inscription at the bottom dedicates the work, wholeheartedly, to the opportunity for a second chance at life, enabling Maravilla to continue on his path as an artist and healer.