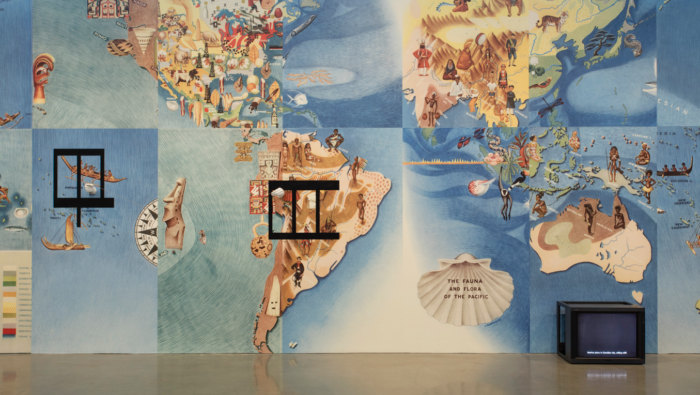 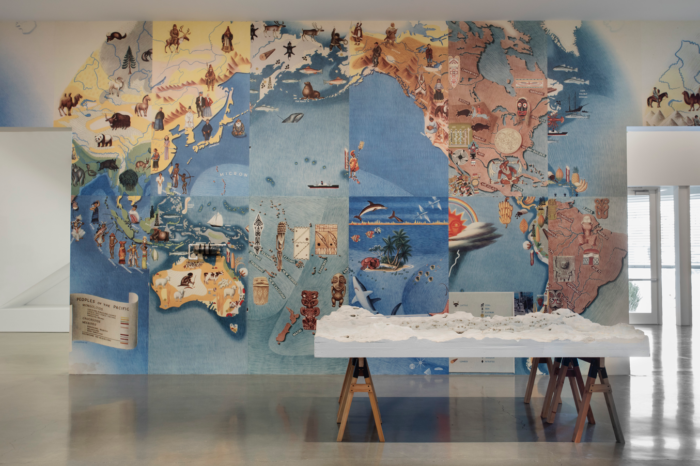 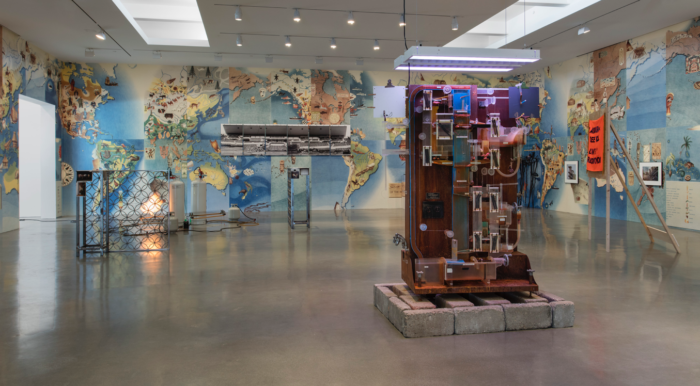 The exhibition examines the influence of the Latin American diaspora by bringing together a group of works by international artists living and working beyond the geographical limits of Latin America. Spanning a variety of media from the 1940s to the present, the exhibition features painting, drawing, sculpture, photography, video, performance, and installation. Shown together, the works in the installation represent the result of a dialogue between Cruzvillegas and Kuri, who are also long time friends and colleagues, creating an idealized world of cultural exchange that is defined by affinities rather than differences.

Providing both a catalyst as well as a visual metaphor for the curatorial vision and conceptual origin of the show, the gallery’s walls will feature socio-political maps inspired by artist Miguel Covarrubias. Entitled Pageant of the Pacific, six rigorously detailed illustrations highlight various economic and cultural routes of trade: Peoples of the Pacific, The Fauna and Flora of the Pacific, Art Forms of the Pacific Area, Economy of the Pacific, Native Dwellings of the Pacific Area, and Native Means of Transportation of the Pacific Area. Spliced together to create multiple iterations of the maps, the images on the walls serve as an hommage to the artist and form a literal backdrop or framing device onto which other art works will be hung.

Nodding to the early history of Latin America, Germán Venegas’ Danza de Coatlicue references pre-Columbian artistic traditions. According to legend, Coatlicue, a Nahuatl word for skirt of snakes, is the goddess who gave birth to the moon, stars, and Huitzilopochtli, the god of the sun and war. Venegas’ blonde carved wood sculpture depicts the eponymous Aztec goddess as two snakes writhing in space. Nearby a suite of his watercolor studies line the walls of the gallery.

Michael Stevenson’s The Fountain of Prosperity was created after the artist’s extensive research into the Phillips Machine, a.k.a. Moniac (Monetary National Income Analogue Computing Machine), a hydro-mechanical analogue computer invented in 1949 by Bill Phillips with the purpose to represent fiscal and monetary flows in a national economy. As a visualization of the abstract it became briefly popular as a pedagogical aid and was used in university departments–around 15 examples were constructed for this purpose. Stevenson’s sculpture is however inspired by an outlier in this history; one of the machines was purchased by the Central Bank of Guatemala. His research stems largely from archival and field research in Guatemala, where the Moniac made a brief appearance in 1953.

Ariel Schlesinger’s Bubble Machine is a kinetic sculpture comprised of a hydrogen tank affixed with a motorized mechanism that forms bubbles. Once the bubble is blown, it drops onto an electrified field of wire coils below. Operating as part studio exercise and part laboratory experiment, Schlesinger’s work uses humour to illustrate violence and destruction.

Some works represent smaller parts of larger existing installations like Cuban Samba by Shimabuku. Inspired by a poetic and chance encounter in which the artist discovered a series of coffee cans placed underneath a leak to catch drips of water, Shimabuku recreates the installation with a coffee can tin out of which emanates a field recording of water droplets, reminiscent of a samba, comprising the memory of a sound.

For the realization of this project, Cruzvillegas and Kuri asked themselves the following questions when considering which colleagues to include, which works to put together, and what issues would be the best to address:

What defines us? Is it the time zone we inhabit? Is it the continent on which we
live? Is it a slippery surface we only surf or fall over? Are we still dreaming in
ideological consistency? Is nationalism a standard to bear and sing slogans for?
Are borders still representative symbols that help to define us, but which we do
not quite fully understand? What is a wall? What is an ocean?

Mundos Alternos: Art and Science Fiction in the Americas at UCR ARTSblock, Riverside