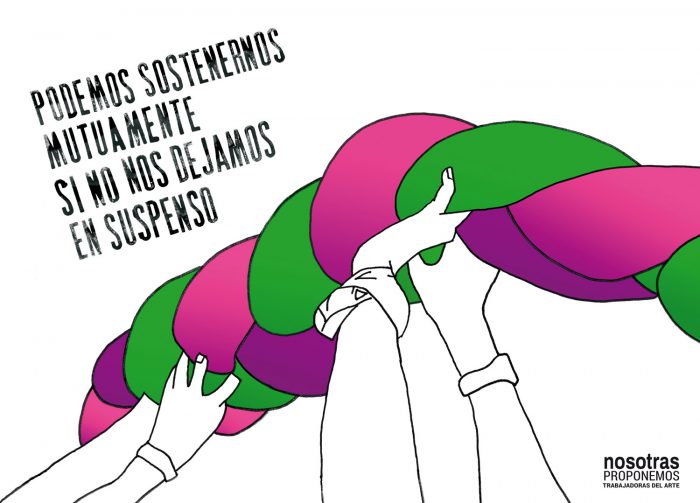 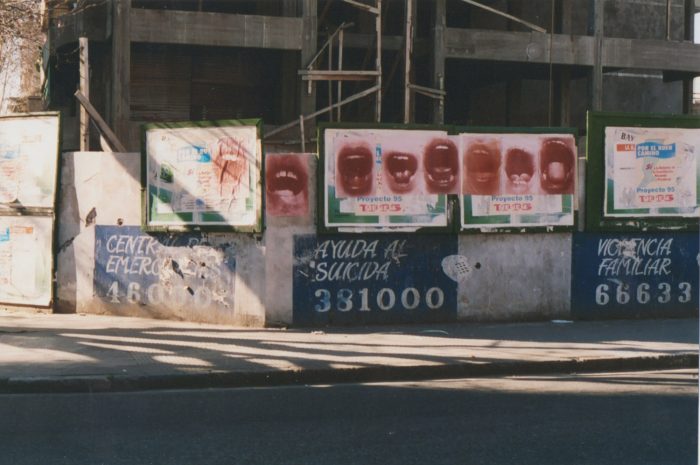 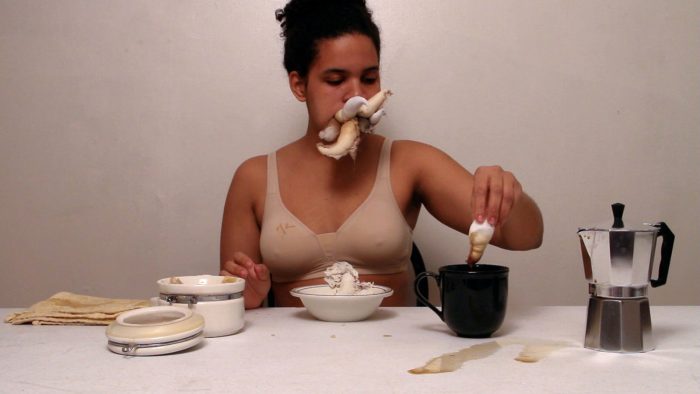 Rolf Art is pleased to announce the launch of the first online exhibition, To Think Everything over again, a research project by Andrea Giunta, which is offered as a reflection and a new gaze at the times in which we live, in the context of the COVID-19 pandemic and social, preventive and compulsory isolation. Through a selection of emblematic works of strong symbolic and historical weight, by distinguished artists represented by the gallery and guests, Andrea Giunta—who has investigated the scope of feminism in the artistic field—manages to shed a light on the current situation through this perspective, and the echo of latent meanings in works of art made in other contexts, revealing to us a new perception of reality, with the possibility of thinking and reformulating the world and the ways in which we live.

In a time of isolation that forces us to remain within our homes, the domestic associated with the feminine, is activated as a space that delimits a new order and administration of time, of resources, of affections, of a new political economy of life; ways of living in which human relations are reformulated in the private and public spheres. Faced with models and systems promoted by patriarchal states, new dynamics and strategies are opening up in the order of the sensible.“To Think Everything over again invites us to think from an experience that intervenes on the affections and on the desire for a new distribution of human relations, symbolic relations, relations with animals and nature. […] To review the excluded and the hidden, the relationships with life, with absence, with the closeness and distance of affections with the new forms of daily life and the State. […] In this scenario feminism emerges to observe global change, contemporary notions of community, the crisis of anthropocentric models and of human exceptionalism. Feminism understood as the articulator of new hermeneutical tools”.[1]

Under this premise, “each object, each photograph, each film proposed in this exhibition, generates a magnetized field that comes into friction with that which it approaches, producing areas of contact between the works that expand before the urgent questions of the present. In light of the perception of emptiness left by a stopped world, and the house as a renewed space of experiences, works that were thought at different times, in other contexts, take on new meanings … It is about delving and stirring in the archives what we did not see, approaching them from new contexts and different inquiries, discovering latent meanings, warnings, intermittent dialogues… they are all materials from which to think what other forms of the world are possible”. [2]

The exhibition is composed of an essay that is developed through thematic and conceptual axes, creating contact zones between the works to give new life to the affective and political field of the images. These axes or chapters are: I. Policies of the Body; II. Forms that administer the body; III. Affects; IV. Memories that are present; V. Urban signs & VI Bodies and nature.

The digital launch of the exhibition and the opening of the online viewing room of the first chapter of this project To Think Everything over again | Body Policies took place on Thursday, May 21, 2020 from midnight, and will be available in our viewing room: www.rolfart.com.ar/viewing-room.

Subsequently, in the course of a month (Thursday 28/05-Ch. II; 04/06-Ch. III; 11/06-Ch. IV; 18/06-Ch. V and 25/06-Ch. VI ) we discovered and inaugurated the different digital corridors (Viewing Rooms) until completing the total route of the exhibition proposed by Andrea Giunta; that we hope in the near future to be able to physically present as a whole in the gallery space.

March was a month of extreme chronologies. On the 9th the international strike of women became effective. The streets of different cities around the world bursted and the political force of the general strike could be felt. There have been many questions and characterizations that have been tried about a movement that impacts public debate. But current forms of feminism elude classifications, they demand continuous transformations. Sovereignty over the body itself and the cessation of femicides are central points in an unfulfilled agenda that became visible in the 1960s. The policies of the body, sexuality, and identities overlap and are enunciated from key words that articulate the rhizomatic diversification of the programs in the present time. Feminism is the political theory that observes the arc that goes from the private to the public sphere. A theory of affections and of the res, the public matter, the transformation of social relations. And a theory in which the house, a space associated with the feminine, functions as the observatory for the analysis of a new political economy of life.

We dindn’t get to experience the immediate consequences of these mobilizations. On March 3, the first patient with Coronavirus in Argentina was confirmed. On March 7 the first deceased. On the 11th, the World Health Organization elevated the epidemic to a pandemic. On the 15th classes were suspended in schools across the country. On the 19th, preventive and compulsory social isolation was decreed. Shows, sports, religious celebrations, human rights demonstrations and all public scenes in the art world were canceled. Minimal movements are allowed, those who breaks the quarantine are detained. We are in global isolation in our homes. I see the avenue almost empty. We have to take care of our day to day. The domestic is activated as a space in which to reformulate all human relationships.

We are in the hitherto unrepresentable times of a pandemic. A state of exception that has ignited imaginaries regarding life and its opposite. A strange moment. Some exacerbate the word war by activating the passion of confrontation. But it is not exactly a war, but an urgent reformulation of private and public life. A test for the concept of humanity. Solidarity, empathy, respect for the emotional echoes of yourself and others. These are times in which reason, the administration of time and resources, promote sensible and flexible strategies. A maternal state was named by Rita Segato. A State that cares for, anticipates and imbues the domestic order, the care of the home, of that dynamic that women have attended in history, to see what is essential in the daily details of life.

We can think everything over again. To think from an experience that intervenes on the affections and on the desire for a new distribution of human relations, of symbolic relations, of relations with the animal, with nature. The encounter of the species, in the words of Donna Haraway. Feminism is a rhizomatic theory and practice that also addresses questions about the post-human, about the production of the common. A feminism that melts, as demonstrated by the protests that have been stirring up Chile since October 2019, with deep questions about the contemporary consequences of global capitalism. A feminism that emerges to observe global change, contemporary notions of community, the crisis of anthropocentric models and of human exceptionalism. Feminism understood as the articulator of new hermeneutical tools.

Exacerbated by the isolation, the focal gaze expands the grammars of the sensibilities. Affections that dethrone the patriarchal signs that intervene the public sphere. It is true that vigilance deepens in the streets, but also the administration of life as care, empathy and solidarity. The home, a central space in the history of the female, is the center of all possible experiences. The space in which today we display our affections. And in which the violence towards feminine and feminized bodies is also concentrated, which extreme domestic isolation. What experiences of the body do we want to return to? Do we seek to restore the world we lived in when we disconnected? The seclusion of humans left a space for nature. Dolphins returned to the shores of the Mediterranean, fish to the canals of Venice and to the banks of the Parana. Pollution decreased in Buenos Aires. We can open the windows because there is no noise.

We want to rethink, from a close look, latent senses in works of art made in other contexts. Go back to a document to detain ourselves in the reverberation produced by images when approached. Every object, each photograph, each film proposed in this exhibition, generates a magnetized field that enters into friction with the one that approaches it. Zones of contact are produced between the works that expand before the urgent questions of the present. In the light of the perception of emptiness left by a stopped world, and of the house as a renewed space of experiences, works that were thought at different times liberate new meanings. We can stop to breathe new life into the affective and political field of images.

To review the excluded and hidden, the relationships with life, with the absence, with the closeness and distance of the affections, with the new forms of the everyday. Relations with the world are ignited in the global laboratory of affects in which we are immersed. Activating works conceived in other times from the present implies digging and stirring in the archives what we did not see but which was there, latent, as a warning, as a repository. The forms, the languages, the stories, acquire a new meaning. Let images like fireflies, in George Didi-Huberman’s metaphor, light up, contrast, set their rhythms. Let the uncertainty be interrupted by intermittent dialogues. They are all materials from which to think what other forms of the world are possible.

[1 y 2] Andrea Giunta, To Think Everything over again, curatorial text of the exhibition, 2020